Taking culinary art to another dimension 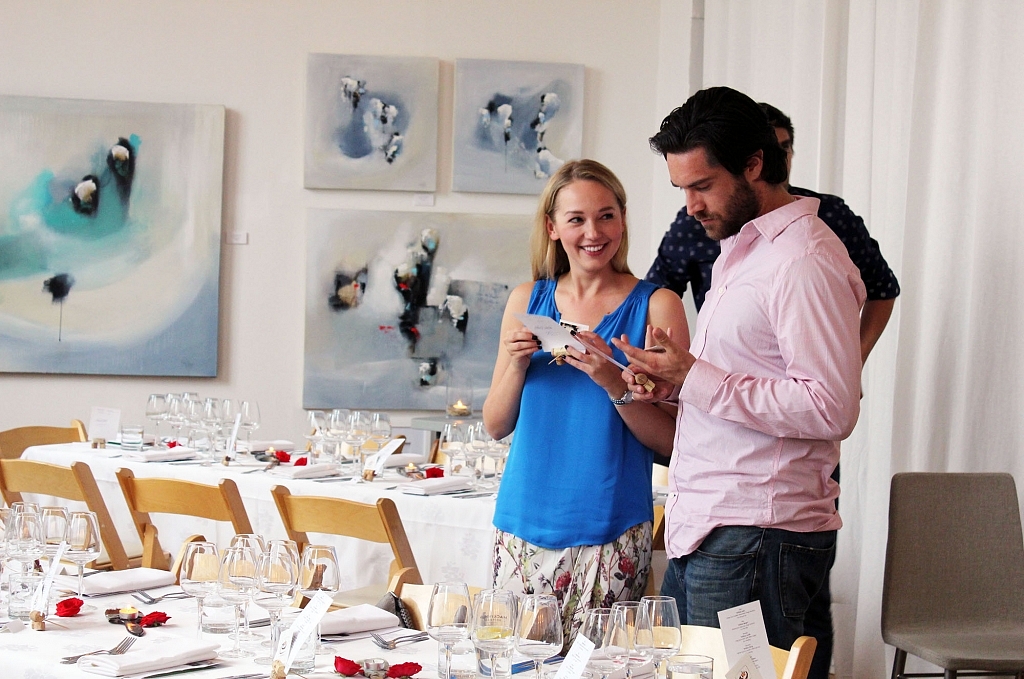 “I’m pretty sure it’s fine,” I hesitantly smiled to my cab driver after being dropped off outside an abandoned-looking warehouse last Saturday. He shrugged and wished me good luck before driving away. A few wrong turns later, I finally arrived at a giant steel door and was greeted by Christopher, the sous-chef who was doing double-duty as antique freight elevator operator that evening.

Sure enough, I had reached L is For…’s Seventh Chocolate Dinner.

L is For… is a private dining and event company run by husband and wife team Eyal Liebman (the chef) and Rebecca Meir-Liebman (the sommelière). I met the dynamic duo at the Artist Project back in February, where I sampled their (surprisingly) good smoked salmon and white chocolate mashed potatoes dish, and happily agreed to attend their next event. 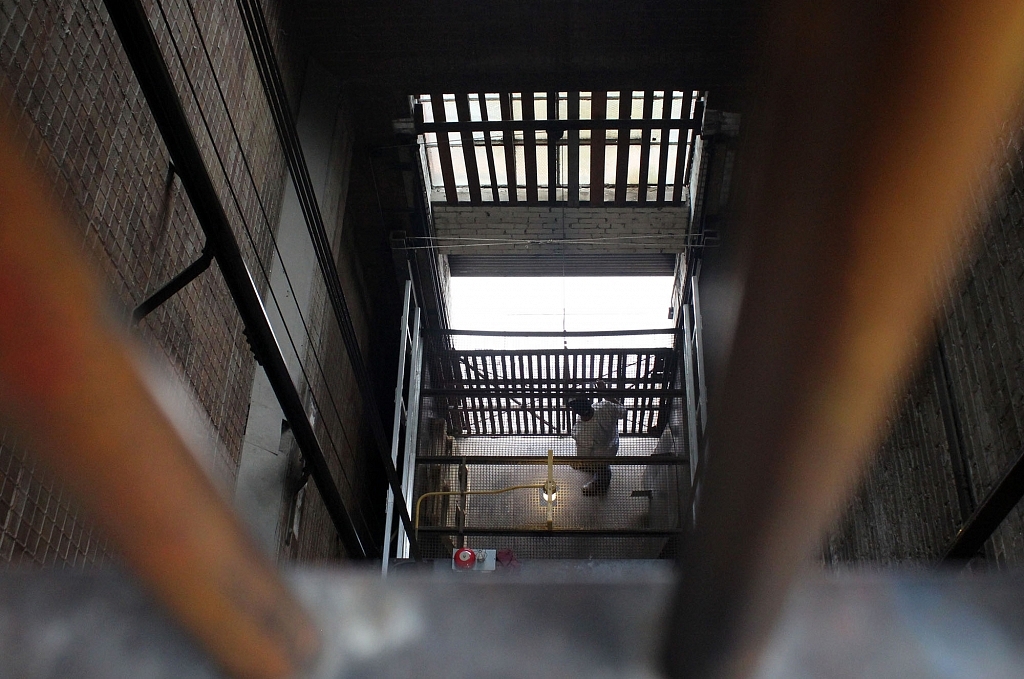 Now, if there’s anything I love as much as food, it’s a good coincidence. A while back, I did a little profile on artist Emily Millar. It just so happens that Rebecca and Eyal had been as equally smitten with this woman’s beautiful art and personality and partnered with her to host this dinner at her studio. Among all the wonderful people in attendance at this intimate gathering, of particular note was Chef Michael Hunter, with whom I had become friends via Instagram but was meeting for the first time today. I was also delighted to meet Tannis Waugh, a lawyer whom I had communicated with numerous times but had also never met until now. It’s a rare occasion when my food, art and law lives collide but I can only assume it was the Universe’s way of telling me that this dinner is where I was meant to be that night. 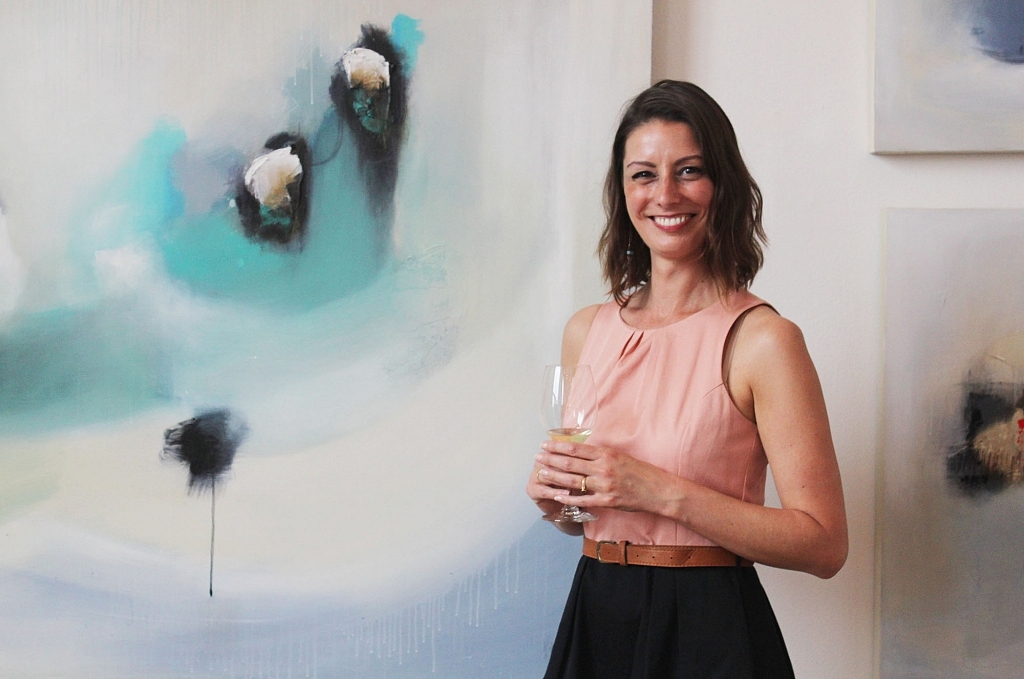 Their individual accolades too numerous to mention, Rebecca and Eyal can be described simply as a pair of culinary artists with a vision. The purpose of these Chocolate Dinners is first and foremost to attract attention to their relatively new catering business. However, these dinners are also a charity initiative for Second Harvest, an outlet to feature some of their favourite winemakers and chocolate artisans, and above all, a way for them to bring together new friends in a casual yet sophisticated setting. Many other catering companies put out great food, but these two are on a mission to create experiences. 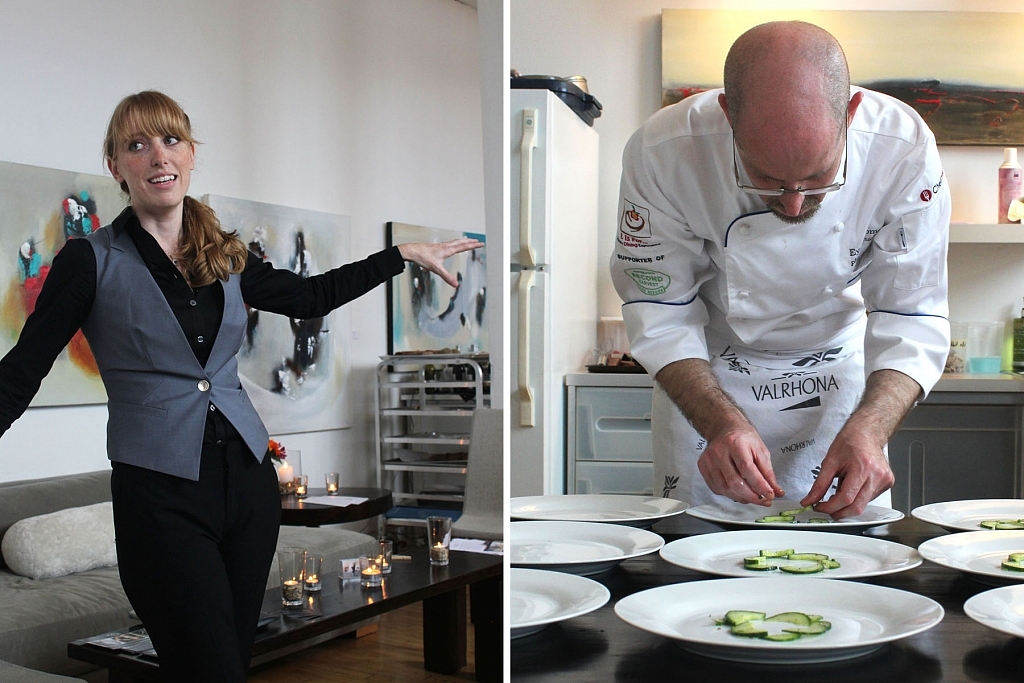 This particular dinner was held in partnership with Lacey Estates Winery and Valrhona chocolate. Eyal’s pastry chef roots naturally had him working with chocolate on a regular basis, but it is his savoury chocolate creations I find most intriguing. The evening’s menu was a secret up until the day prior, but not for creating suspense per se. After an introductory Chardonnay progression, Rebecca explained that Eyal’s style of cooking with inspirational local ingredients sometimes warranted making up-to-hour menu changes if he felt it would make more sense. 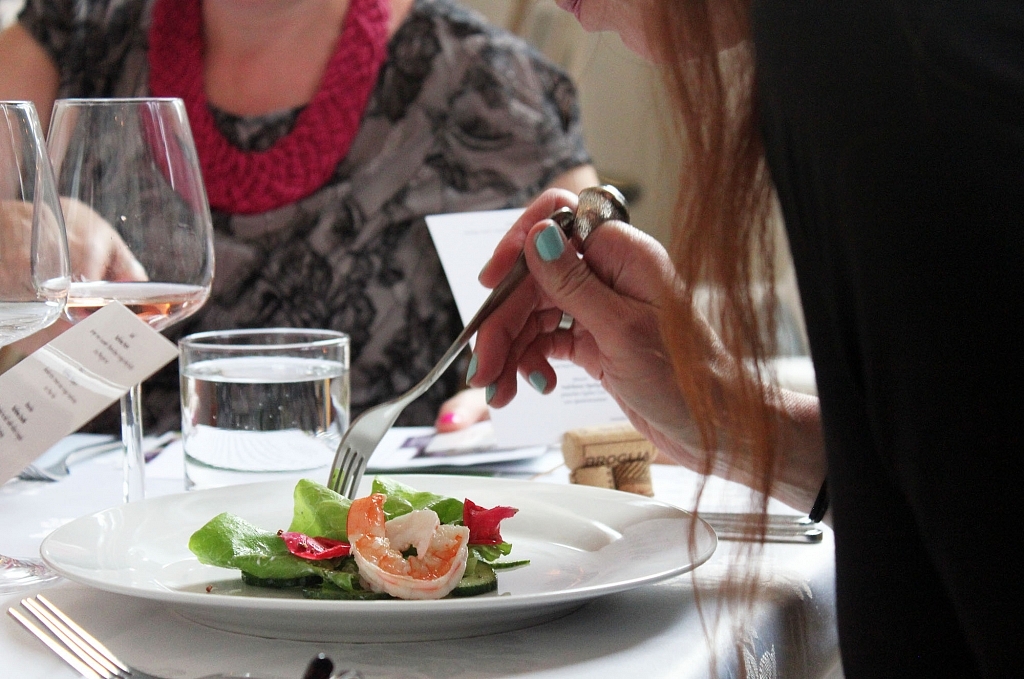 Our first course was a Boston Lettuce salad with cucumber and rose petals tossed in a Valrhona Ivoire dressing, served with a large butterflied shrimp that had been poached in rosewater. Somehow, instead of tasting like a grandmother’s curtains, this rosewater preparation had a really nice subtle effect on the palette, particularly paired with the 2014 Pinot Gris Rosé inspired and in part created by Kimball and Liz’s (the winemakers) daughter. 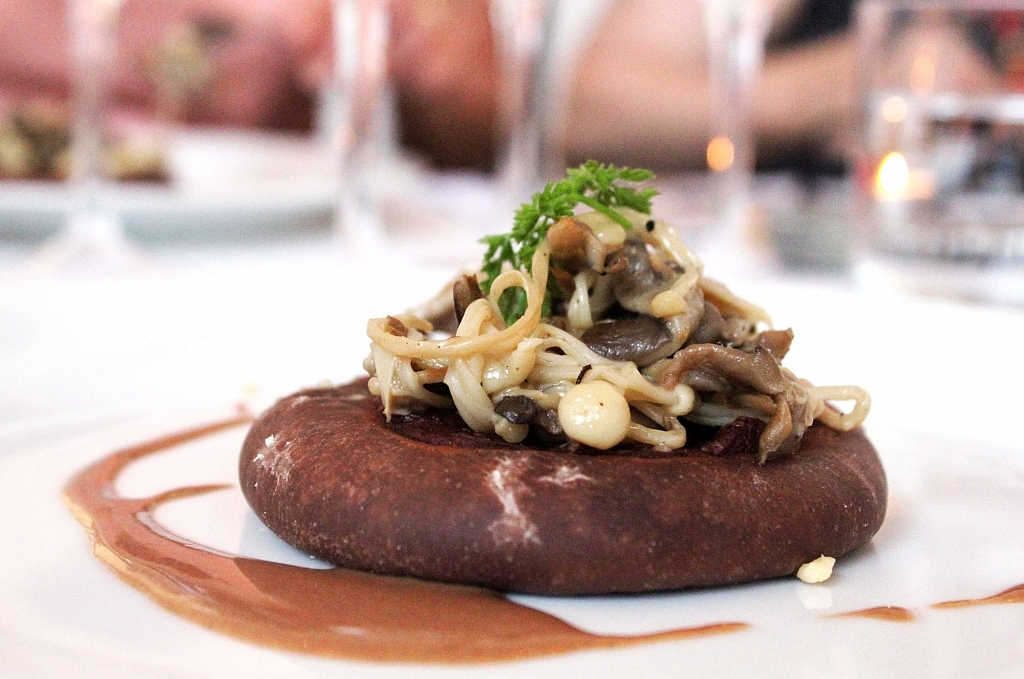 A mushroom chocolate pizza paired with a 2011 Pinot Noir was followed by aranchino filled with rabbit rillettes paired with a 2012 Chardonnay. The charcuterie course was in the form of a crépinette served with blueberries on a vodka, pear and Valrhona Dulcey sauce. The 2014 Riesling paired with that dish was my favourite wine of the evening, offering a crisp and bright contrast against the succulent pork. The main was braised venison and roasted Beef Montmorency separated on the plate by Eyal’s signature white chocolate piped pommes purée. Naturally, two glasses of red (the Dorland Red and 2011 Baco Noir) were required for this course.

Though every dish was lovely, the dessert was unsurprisingly the best, with panna cotta and cream-like artistic drops described as pistachio, lychee and rose. The night sky had fallen at this point, so we didn’t realize until part way through that the entire plate was literally covered in a layer of chocolate. I scraped the whole thing clean without one ounce of guilt. 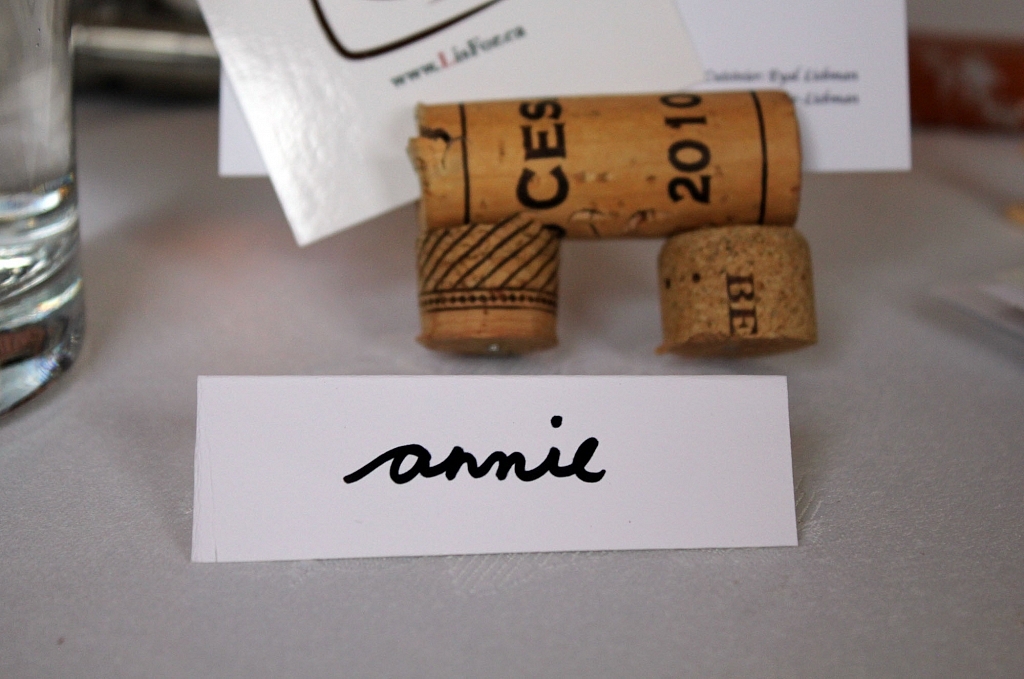 This dinner isn’t just a showcase of Eyal and Rebecca’s talent, though that aspect is certainly self-evident. Morever, it is a showcase of their love of creating the unique and memorable. Paired with Emily’s art, great conversation, and flowing wine, this was one of the most beautiful dining experiences I’ve had to date.

L is For…‘s next event is called Food Beyond this Point, where Eyal will create dishes with candy, inspired by Berenson Fine Art. There will be two sessions, and will feature wines from Rosewood Estates Winery, Back 10 Cellars, Stratus Vineyards and Charles Baker Riesling.You can buy tickets on their Facebook Page.

Disclaimer: Though I was invited as a guest to this event, we all made donations to Second Harvest as a token of our appreciation and support for the great charity.

January 2016 update: Rebecca and Eyal have since rebranded as Chef & Somm, offering bespoke dining experiences in the Toronto area.