A Week in Central Newfoundland 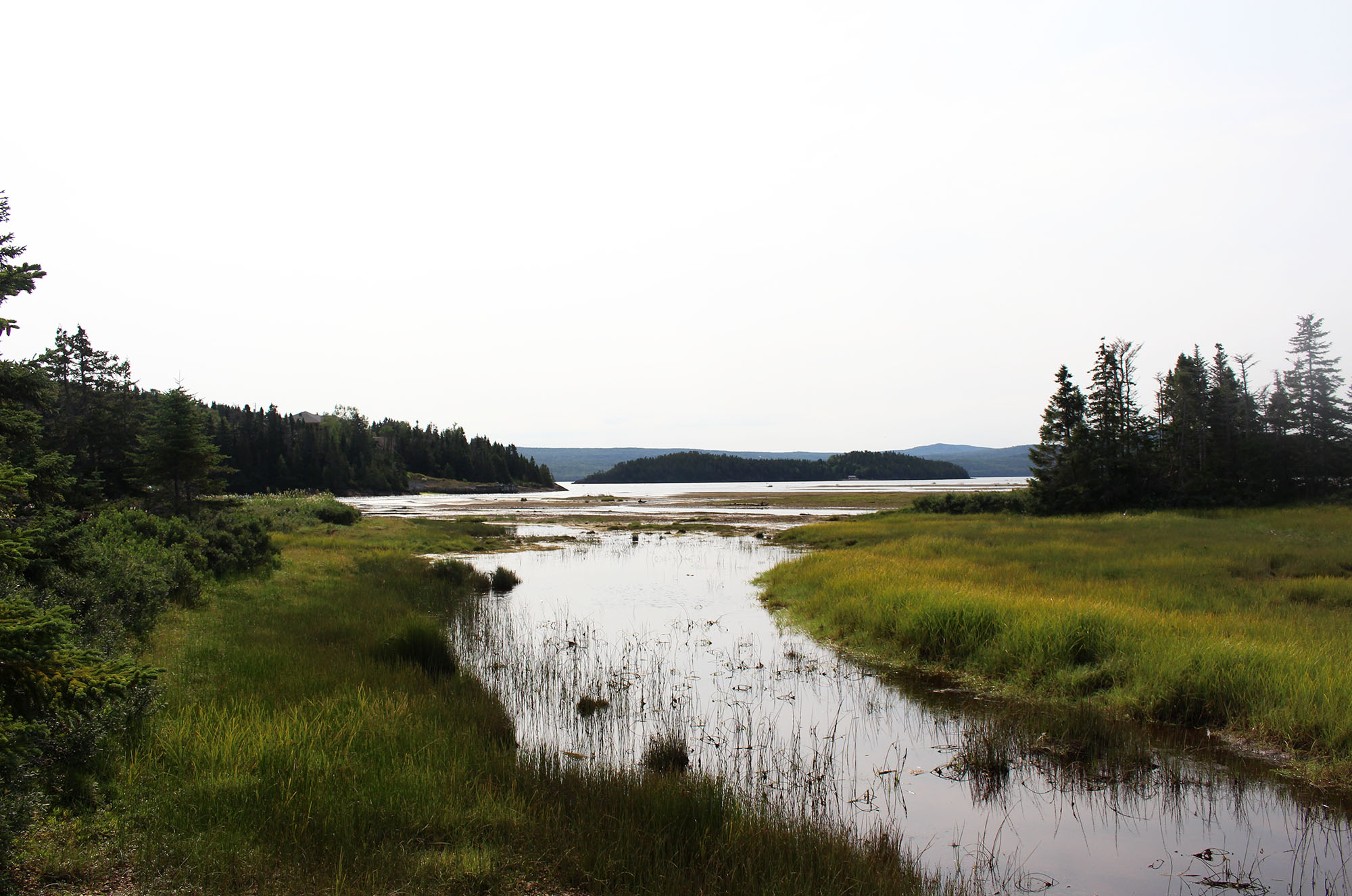 I was sitting in the backseat of a red KIA Crossover watching the patches of black spruce trees break up the boulders like a ticking metronome needle. Wendy, a reporter from St. John’s, was adjusting the music from the passenger seat while laughing at the irony of a sign indicating that we had just entered “Scenic Green Bay”. Having lived in Newfoundland all her life and a self-proclaimed “Townie”, the sign read as a joke. “Scenic? It’s literally just trees and rocks!” she shouted back, turning up the music just a little bit more.

Maybe the bizarre 1.5 hour time difference was to blame, but I was in a bit of a trance. I turned to Blaze, the Matador Network photographer and videographer sitting beside me and noticed he was staring out the window too. But then again, he may just have been contemplating whether he should eat another Jam Jam or Snowball (local Newfoundland sweets) located in the giant snacks basket wedged between us. You certainly don’t get this view, or this hospitality, in New York City or Toronto. 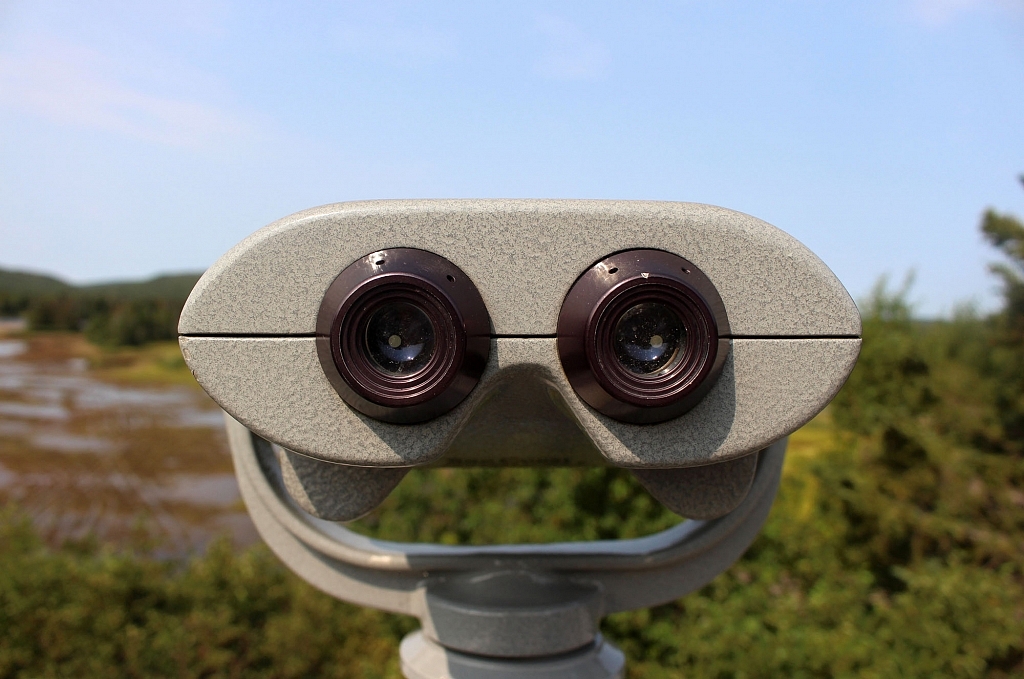 Along with Wendy and Blaze, I had been invited by Adventure Central Newfoundland to explore the largest region in the province, and to attend The Gathering (a very special event which will be covered in my next post). Our energetic trip organizer Matt was in the driver’s seat, while the calm and collected Caroline followed closely behind, her car filled to the brim with tents, tarps, and heaps more snacks. But before I get too far into the story, let me start from the beginning.

I had flown into Gander International Airport the night before direct from Toronto Pearson. For an international airport, Gander sure is small. However, this “Crossroads of the World” has a surprisingly rich military and aviation history. It was also an integral player during the flight diversions post-9/11 and is now known the world over for its warm hospitality. It was 1:30 AM when I finally hopped into a Busy Bee Cab (the only cab company in town) and…realized I could not understand a damn thing the cab driver was saying. It’s a well-known Canadian joke that Newfoundlanders are often subtitled on national news, but experiencing it is another thing altogether. Before I even got a chance to initiate my big city cab reflexes (There was no meter and the taxi chit process could best be described as “casual”), the six-minute ride to my hotel was already over.

After a pleasant breakfast, Blaze and I were picked up by Caroline (Matt hopped in along the way) and started our two-hour drive to King’s Point. King’s Point is a quiet coastal town well-situated to observe the annual icebergs that float their way down from the Arctic. Given that the iceberg season had just passed, we knocked on the studio door of King’s Point Pottery instead. Owners David and Linda (top right) are fiercely proud of their work, and of their province. Blaze (top left) and I had a fun throwing class with David before Wendy arrived from St. John’s. The King’s Point Whale Pavilion beside the studio is home to an impressive 52-foot humpback whale skeleton and definitely also worth a visit if you’re in the area. 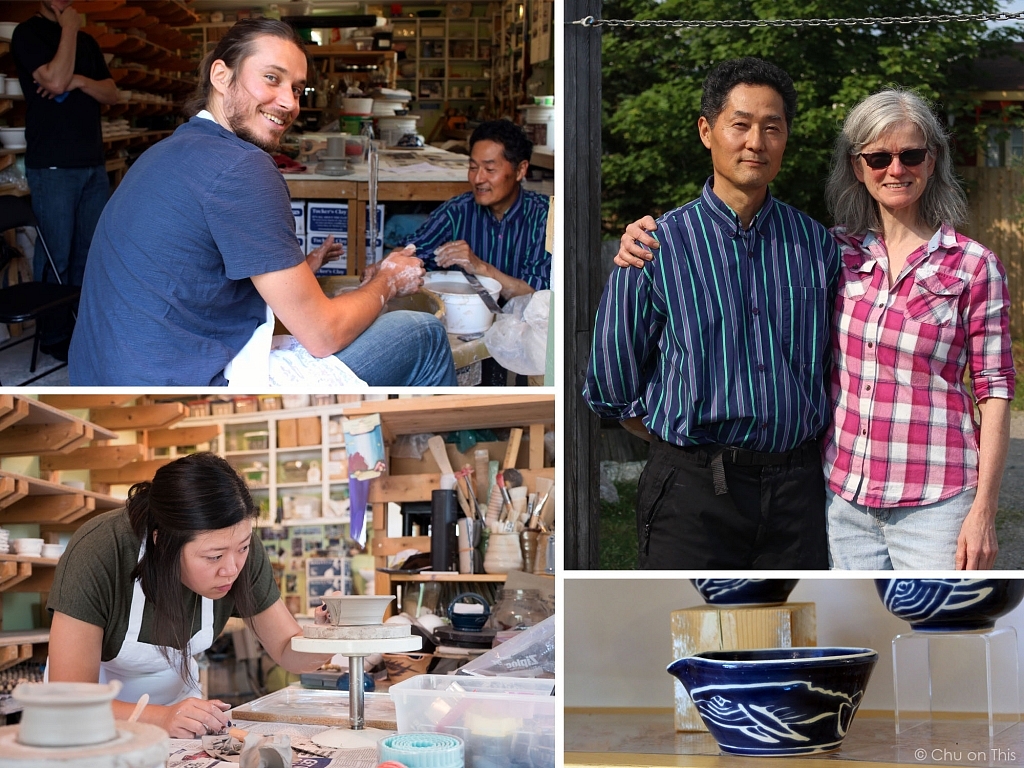 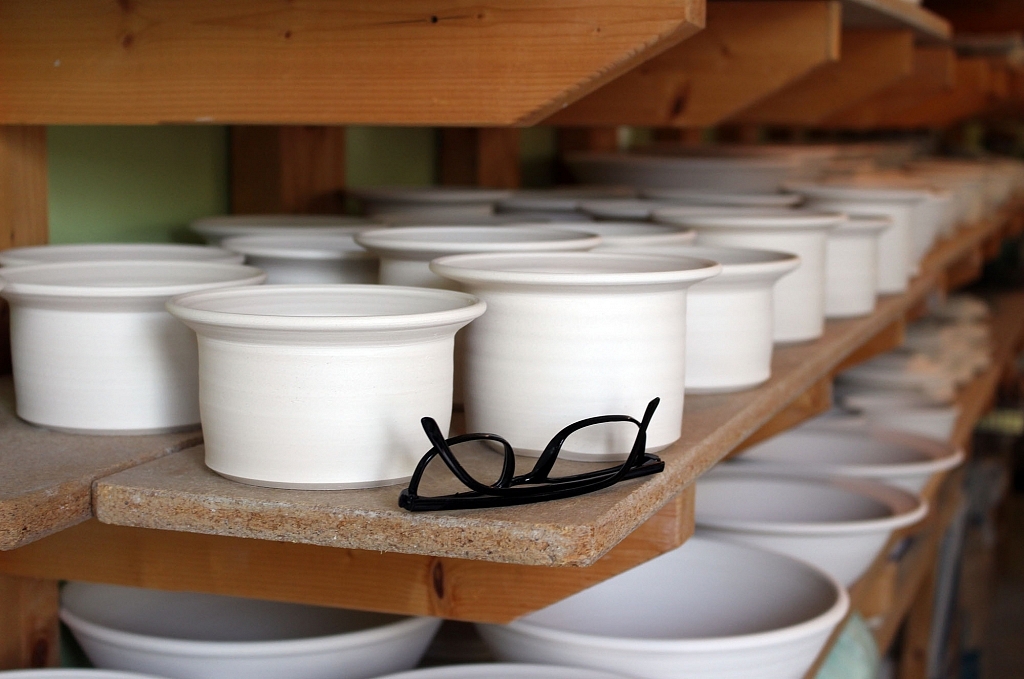 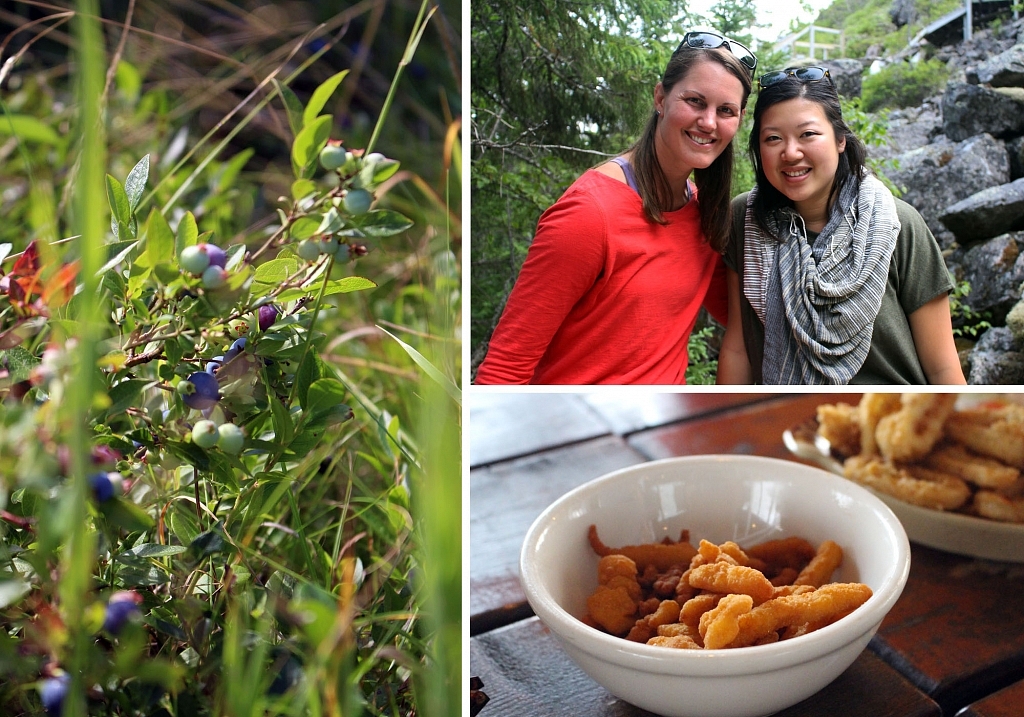 We also had fun time exploring nearby Rattling Brook Falls, where Caroline (she’s also a botanist) introduced me to the wonderful world of Newfoundland’s edible plants. From the minty creeping snowberries, to the tart red cracker berries and sweet wild blueberries (left), it’s nice to know that I could probably survive for quite some time if left to fend for myself in the middle of the woods. We ended the day at By the Sea Café where we nibbled on various forms of deep-fried seafood (my first time trying clam strips!) and the locals introduced me and Blaze to Black Horse beer.

We arrived in Springdale just in time for bed. 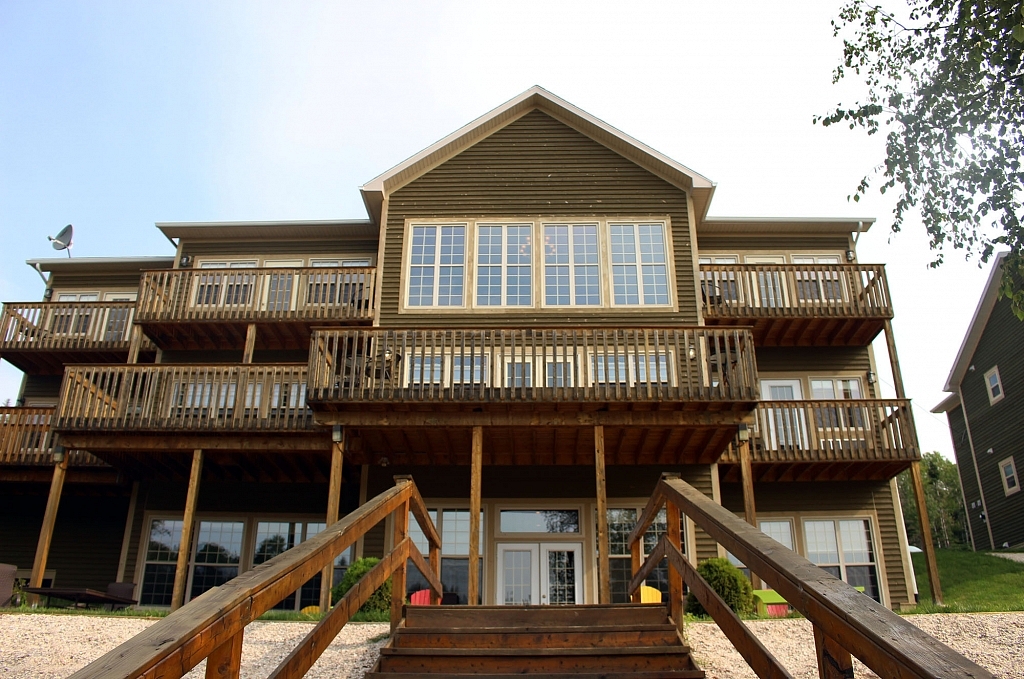 Waking up at the suites at Riverwood Inn was very, very, nice. Though I was still groggy, I managed to roll out of bed, put on a swimsuit (and a fluffy robe) and gingerly squished my toes through the mud along the riverbank before jumping in to the Indian River—salmon, eel grass and all. Talk about a morning swim! A nice hike on the Indian River Trail followed before we headed into town and stuffed our faces with garlic fingers ((similar to a pizza, save the toppings and slather on the garlic and cheese) from Café Factory Pizzeria (yes, the restaurant is attached to a gas station convenience store). 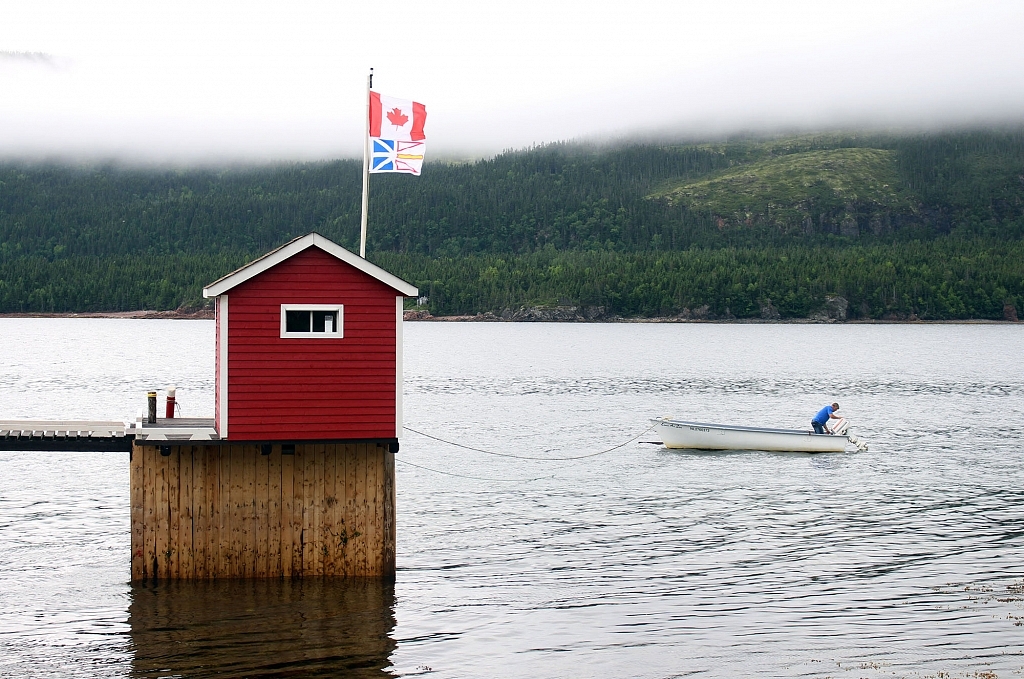 Packing the remaining garlic fingers into our snack basket, we hopped back into the car (Tree. Rock. Tree. Rock.) and made our way to the amalgamated communities of Burlington-Smith’s Harbour-Middle Arm (BSM), where the Gathering was held. Though our perfect summer weather eventually made a dramatic turn to the cold and rainy, the misty fog creeping off the ocean provided a serene cloak over the entire shore. 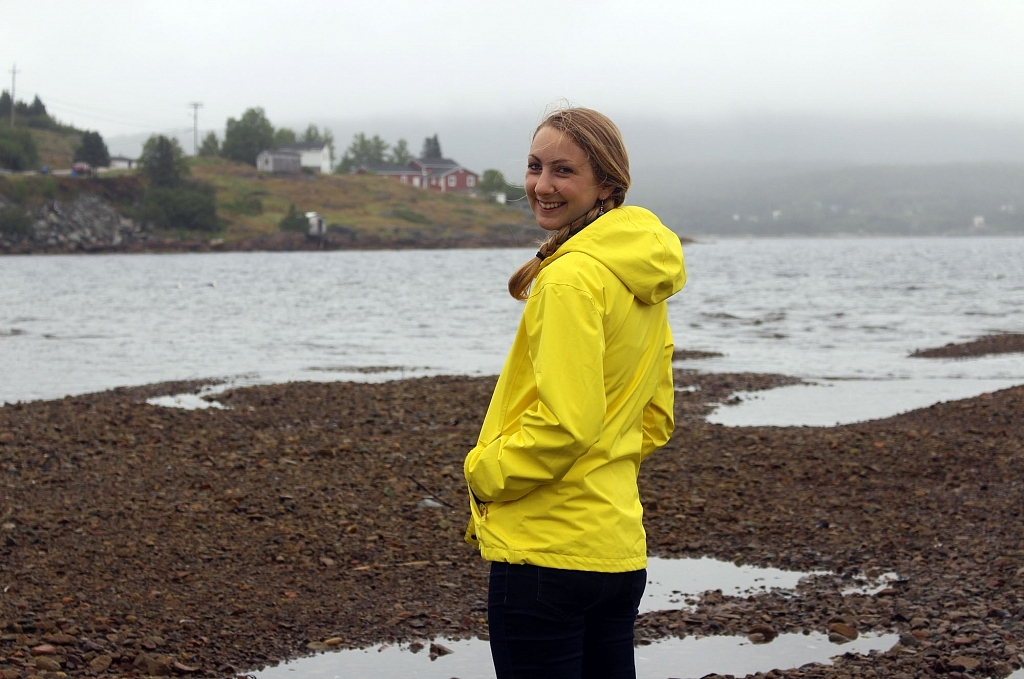 Central Newfoundland is not the place to visit if you want to sit in a café and people-watch. Rather, it’s a place to visit if you want an adventure in one of the most beautifully secluded corners of our country. I hiked more trials and jumped into more bodies of water this week than I usually do in a year. I learned about the Island’s incredible bounty of forage-able wild plants and deep-seated love of gravy. I marvelled at spawning Atlantic Salmon at the Salmonid Interpretation Centre and white water rafted the Exploits River. There may not be a lot of people here, but those who are, are a kind, welcoming bunch. 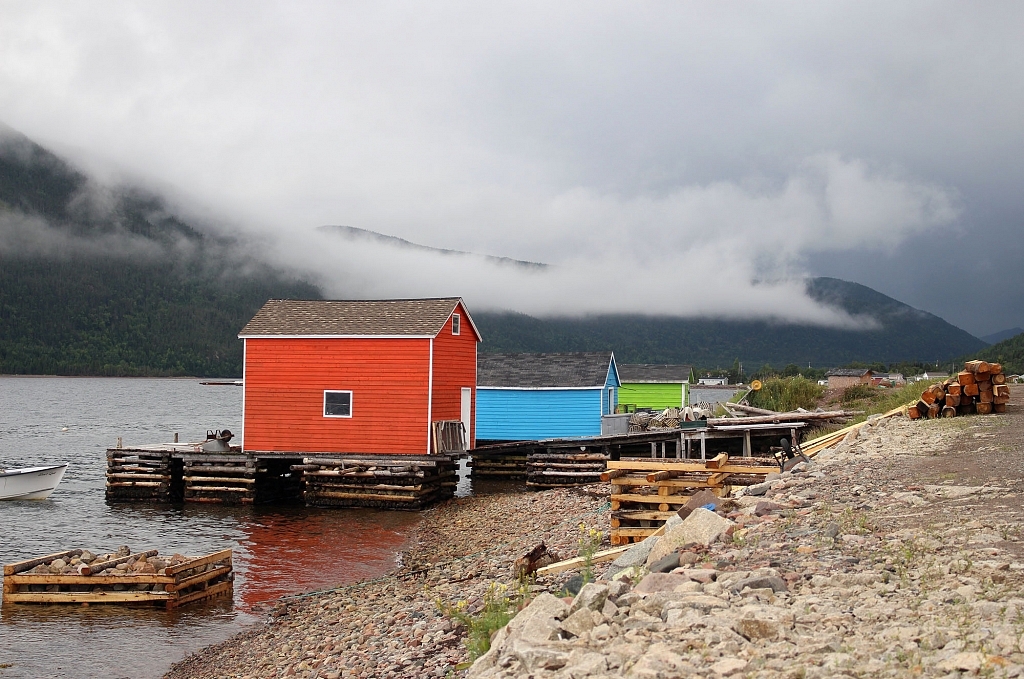 A few days later, I found myself in a Busy Bee Cab again. Only this time, I understood my driver perfectly when he instructed, “Yes, b’y! Just sign here and don’ you worry about the rest o’r it, my love!” No meter, no name, no destination, no problem. I just smiled and waved goodbye to him, and to darling Central Newfoundland.

Where to Stay: I stayed at four different hotels and camped for two nights during this trip. I would highly recommend the following two establishments for your next visit: Riverwood Inn: A 4 1/2 star lodge overlooking the Indian River with numerous suites and conference area. Fully accessible and features a continental breakfast and licensed bar. More info: www.riverwoodinn.ca. Riverfront Chalets: 4 luxury chalets located on the Exploits River that each sleep 6. They’ve got saltwater jacuzzis and barbecues, and just about every kind of adventure rental equipment you might desire. Rated 4 1/2 stars. More info: www.riverfrontchalets.ca.

Disclaimer: I was a guest of Adventure Central Newfoundland and my transportation, accommodation, excursions and most meals were covered for this entire trip. However, creative direction and opinions are completely my own and Adventure Central Newfoundland did not review this post prior to publication. Photo of me decorating my clay bowl taken by Blaze Nowara and photo of me and Caroline taken by Matt Molloy. All other photos taken by me.
Share on Facebook Share
Share on TwitterTweet
Share on Pinterest Share
Share on LinkedIn Share
Send email Mail
Print Print
CanadianNewfoundlandtravel
NewerMr. Flamingo
OlderA Day on Salt Spring Island