A Weekend in Durham Region 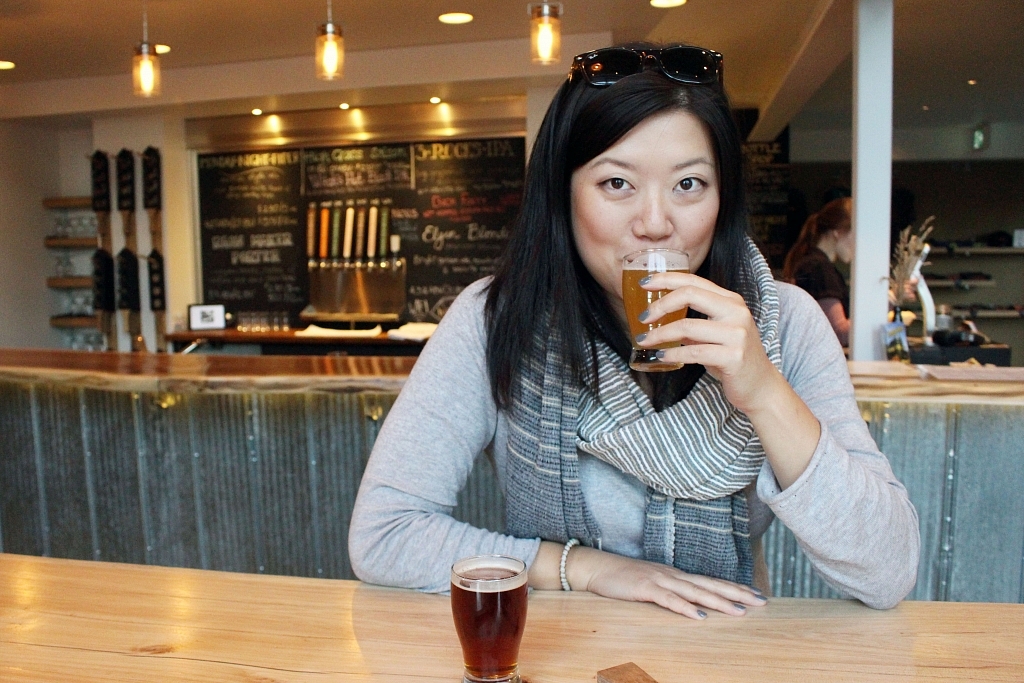 I took the first sip of my little 5oz beer and chuckled. “This literally tastes like a witch’s hat” I joked to Eric about the dark, malty, aptly-named brew. We had just ordered two flights (for a total of eight) of The Second Wedge’s samplers and settled down at a nice, bright table at the Uxbridge brewery to play a casual game of Clue before dinner.

Somewhat embarrassingly, I found out later from a fellow patron that the Witch’s Hat was actually a nod to the Uxbridge historical train station’s pointy-roofed ticket booth, and not the dusty old Sorting Hat from Harry Potter that I had been envisioning. “Yeah, Rob [the co-owner] really likes to feature local places”, explained Mark (the aforementioned patron and Second Wedge regular). Mark had come by for a quick drink with his parents-in-law and to pick up his weekly jug of 3 Rocks. “By the way”, he offered as he walked out the door, “if you guys are staying for awhile, you should go to Urban Pantry and order their fries”.

Community pride and natural cross-promotion was the theme of my entire trip to Durham Region last weekend. Less than an hour East of Toronto, this region encompasses Pickering, Ajax, Whitby, Oshawa, Brock, Scugog, Uxbridge, and Clarington. I knew there were some beautiful trails and farms in the area, but I didn’t realize how many breweries and Feast ON restaurants there were as well. With all this in mind, I worked with the Ontario Culinary Alliance to design an ideal itinerary that would highlight the best of Fall for my trip. My friends Steve and Eric (and Rory the puppy) also came along for the ride (read: they graciously drove me everywhere). 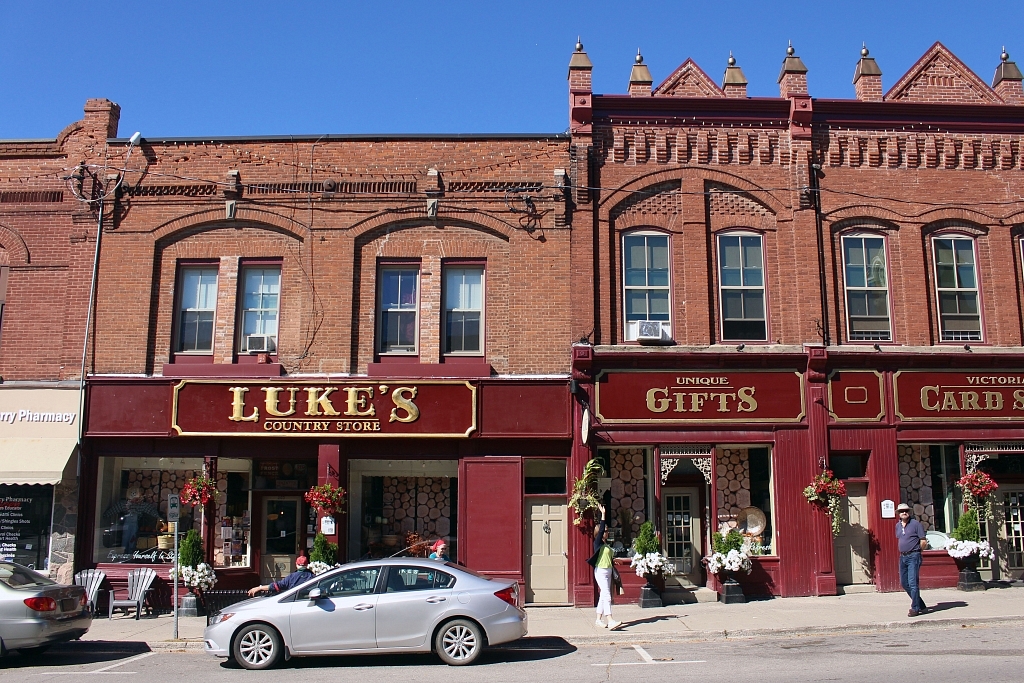 If you’re a Gilmore Girls fan, Port Perry is probably as close to Stars Hollow as you’ll ever get. Complete with a big gazebo, town Chilifests and Christmas tree lighting ceremonies, an old-fashioned candy store and an active BIA, it’s an idyllic small town with a lot of character. Steve’s family even owns a place called Luke’s (which is not a diner, but a popular home décor store). Take a stroll down to the Piano Inn & Café (where I stayed) if you’re in the mood for a nice sandwich or sundae.

The first thing we did upon arrival was lunch at Marwan’s Global Bistro, a restaurant that is exactly as it is described. Marwan traveled the world and infused his favourite flavour profiles into Canadian comfort classics such as his PEI Mussels in a Tangy Thai Coconut Curry Broth and Halloumi BLT Grilled Panini. The menu is international enough to be exciting yet familiar enough to be widely accepted by locals. I enjoyed a ham and Gruyère crepe with side butternut squash soup and a warm goat’s cheese salad. 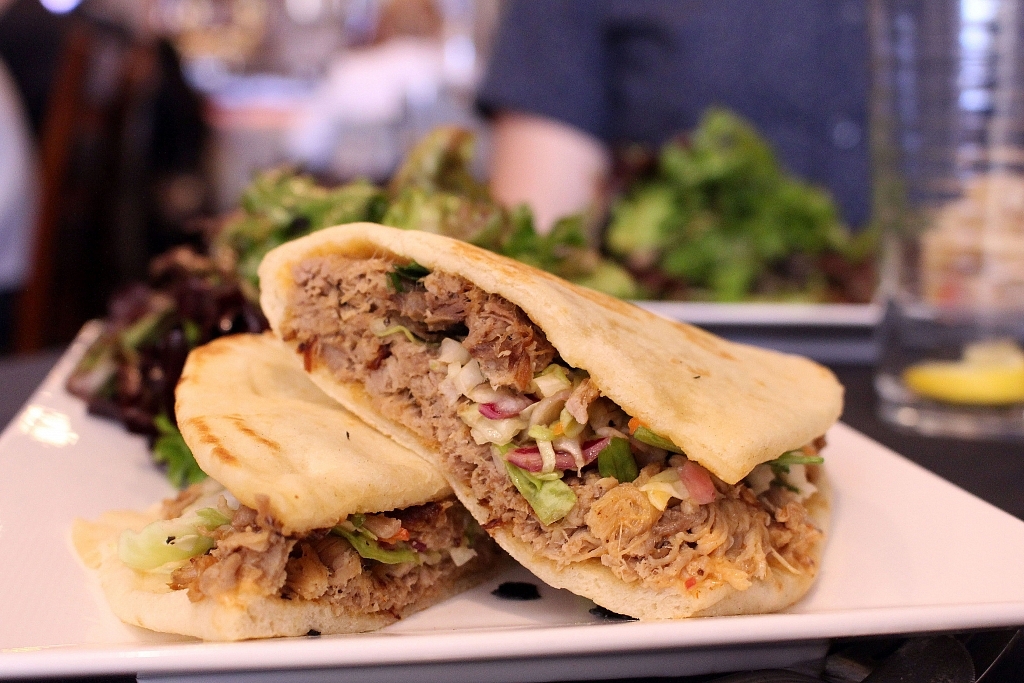 Steve guided us through the town, stopping in to get some meat pies at Herrington’s while I sampled some award-winning Italian olive oil that Angelo from Sarafino was introducing to shoppers downtown. While we didn’t get a chance to make an official visit to Old Flame Brewing Co., it was on the menu at Marwan’s, in the popcorn at the Nutty Chocolatier, and also in Steve’s fridge. Remember that cross-promotion I was talking about earlier? I doubt there are many establishments in Port Perry that don’t (or wouldn’t) serve Old Flame.

Later on that afternoon, we visited the newly renovated Willowtree Farms, complete with farm animals and stylized tractor out front and gardens and orchards out back. Inside, you’ll find an amazing selection of fresh produce and locally sourced products. I left with a mountain of strawberries, some beautiful red wine jelly and zucchini salsa, while Eric opted for pickled jalapeños and some great cheeses. 90% of the things they sell here are either sourced from their own backyard or made in Ontario. It’s definitely worth a stop if you’re in the area.

After a beautiful walk with Steve’s family dogs through Durham Forest, we headed to Uxbridge. Old Flame to Port Perry is like The Second Wedge to this town. That is to say, you will find their beers everywhere—and for good reason. Their brews are fantastic (try the Elgin Blonde for a lighter, easy drinking one) and the brewery itself is so clean and comfortable that it was hard to leave. However (much to Mark’s approval), Eric and I had our reservations at the Urban Pantry to attend to. 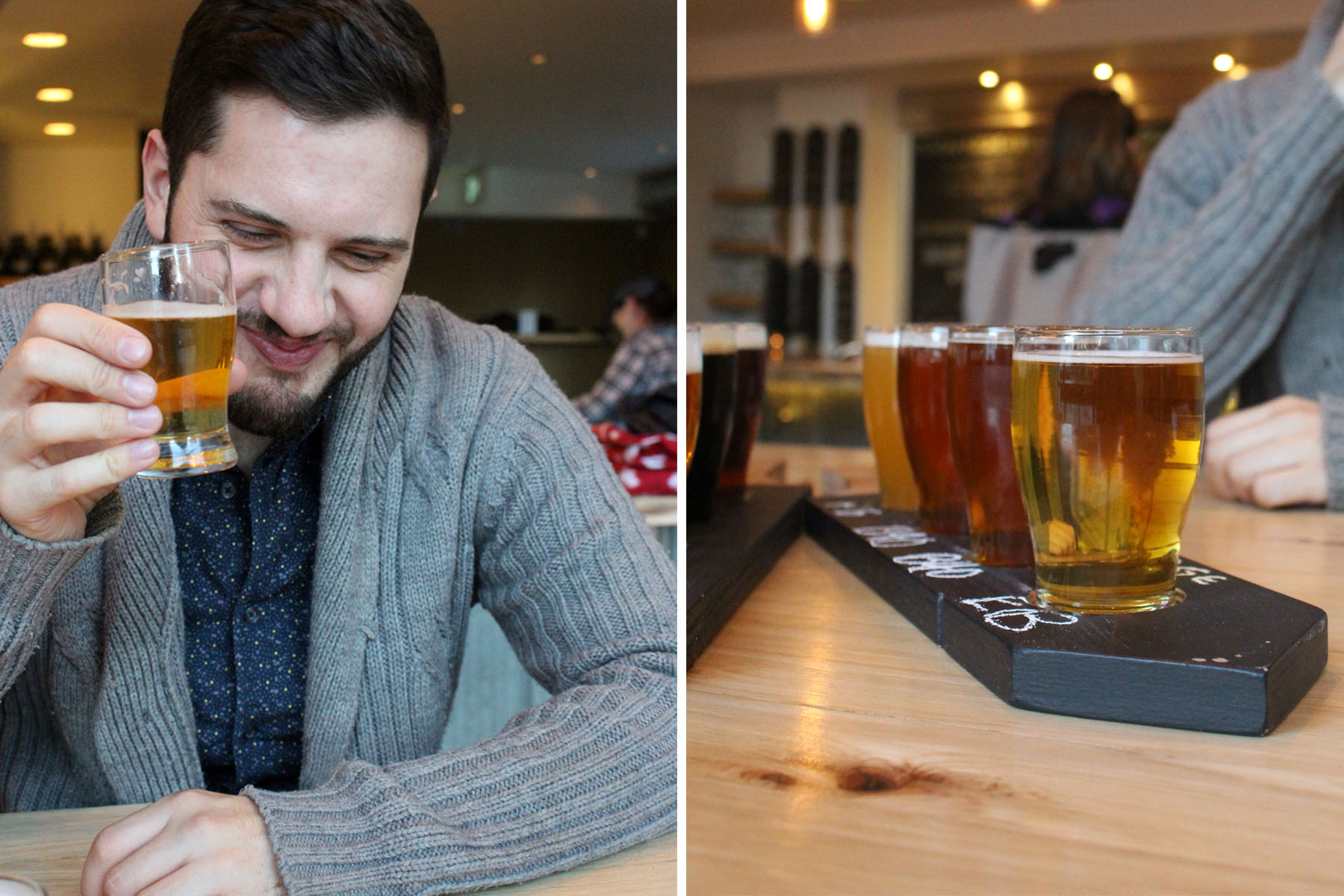 Both establishments are Feast ON certified, and it’s clear that they are very supportive of each other’s businesses. The fries (either served as steak frites or spiced and served with a Sriracha aioli) were fantastic, as promised. While fairly non-descript on the outside, the restaurant has a warm, cozy interior, heightened by the partially-open kitchen and pass. Though I wish the perch had been prepared differently, we greatly enjoyed the experience (and the panna cotta-like cheesecake!) overall.

The next morning, all three of us headed out to Archibald Orchards & Winery in Bowmanville to do some apple picking. It was the first time that Eric and I had ever done it, but Steve was a seasoned pro, and headed straight to the juicy honey crisps. We ended up with a half bushel of galas too, for good measure. 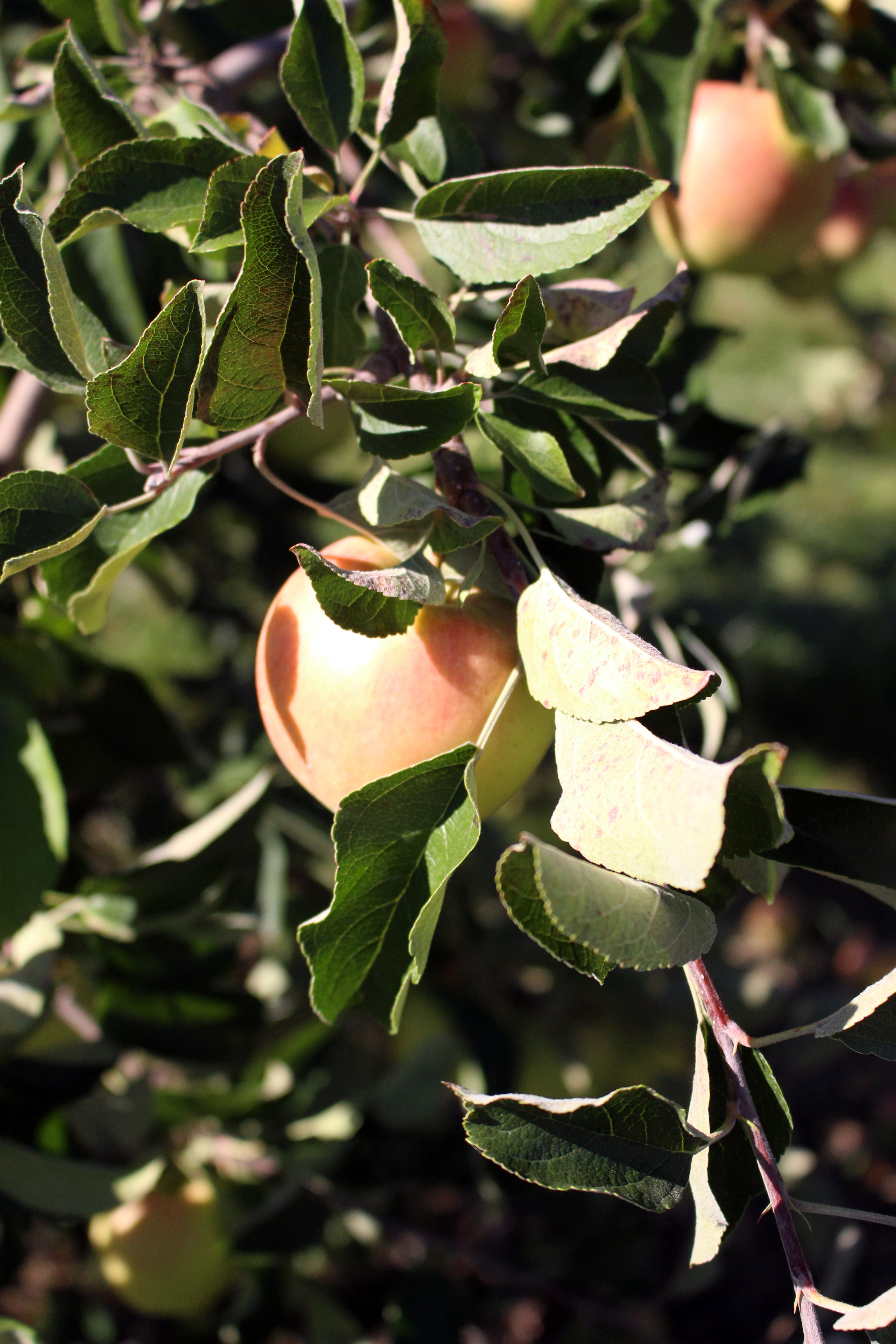 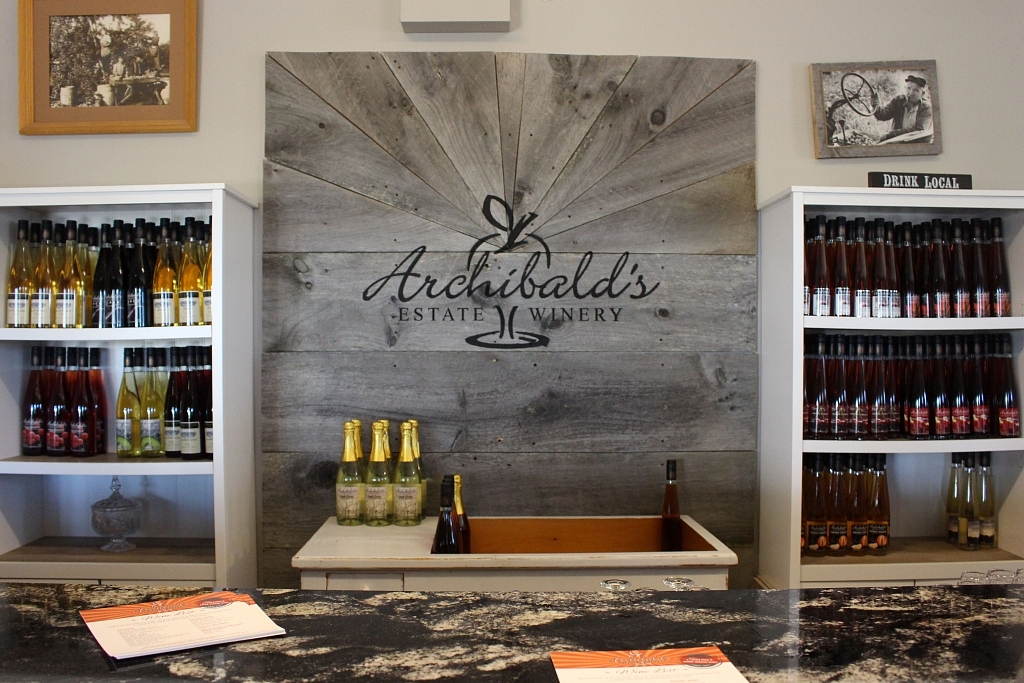 The estate is well-designed with a canteen-like outdoor café near a children’s area for the families, and a wine tasting room for the adults. This was my first time trying apple wine too. I was so impressed that I bought a few bottles to take home and I’m already thinking about how well they would go over for Thanksgiving entertaining or served with impromptu evening cheese plates.

We finished off the Clarington apple trail by picking up a dozen of Steve’s favourite donuts and some apple fritters at Tyrone Mills. I probably shouldn’t have eaten them right before lunch, but they were so warm and fresh–I couldn’t help myself!

By the time we arrived in Whitby for lunch, I was already apple and carbed out. Thankfully, KB Food had a beautiful vegetarian frittata on their menu that definitely hit the spot. Eric ordered their signature “KBenedict”, with slow-braised heritage chicken on English muffins topped with a sweet pepper beurre blanc. The food was great, but what we appreciated the most about this whimsical eatery was the fact that our waitress proudly took the time to speak to us about the restaurant’s philosophy for cooking with fresh and local (and all the things that make it a great Feast ON establishment) without any prompting. It’s a fun and charming place that I would definitely frequent often if I lived in Whitby. 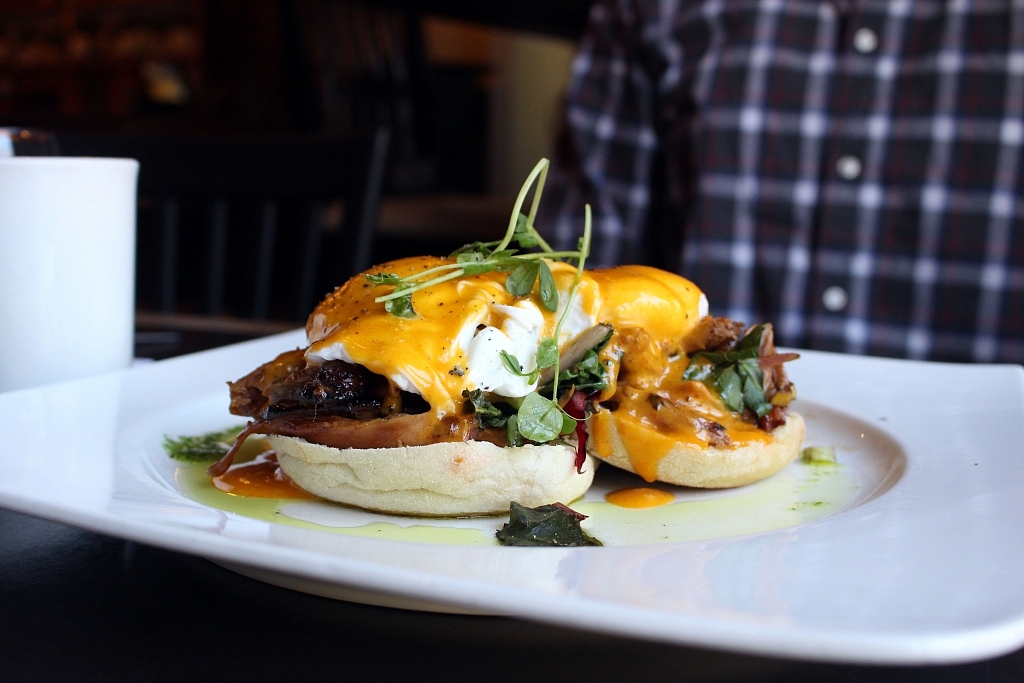 Another great thing about KB Food is its proximity to the Whitby GoTrain, which I took to get back to Toronto. As I was sitting at the platform with my bushel of apples, I strung together the entire trip and noted how big and small everything felt at the same time. All of the towns are only about 30 minutes away from each other and they are all unique but tied together with a distinct Ontario flavour (literally and figuratively).

I was very happy with all of the decisions we made this weekend. The only decision left now? What to make with all these apples!

Getting there: Driving to Durham Region is the easiest way to get to and around the area, but you can easily take the GoTrain to Ajax, Pickering, Whitby or Oshawa stations from Toronto.

Where to stay: The Piano Inn & Café is located in Downtown Port Perry and was a great accommodation choice. If you’re looking for something a little different, I would recommend booking a unique Airbnb such as this treehouse.

For assistance planning your trip: Check out the guides at Durham Tourism or Ontario Culinary Alliance, or check out the fantastic Brewery Discovery Route I was following. For more Feast ON establishments or ideas, click here to see the rest of my posts relating to the culinary certification.