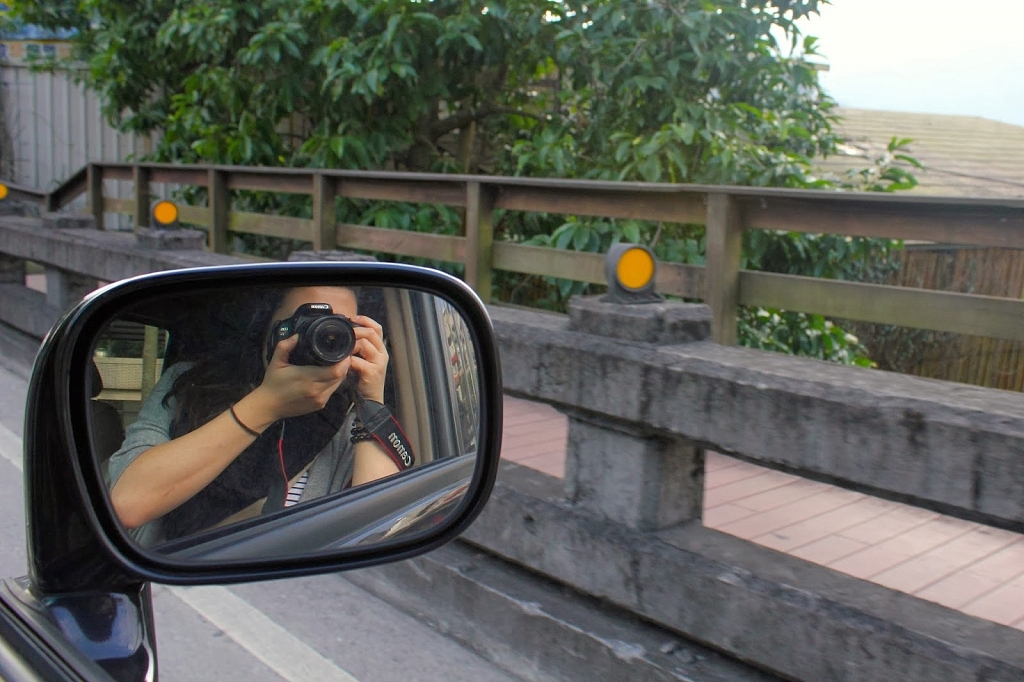 Without further ado, I bring you the first of a series of about my almost-a-semester-long stay in Taiwan. For those of you wondering what I’m doing here, I’m participating in an academic program known as the Aboriginal Intensive through my law school. Thus, you may find that this theme runs a mild current throughout my posts during this time.

It’s been a few weeks now and the weather has been pretty amazing…ly awful. Although, I have heard from others that the last couple of days have been awful in many parts of the world. In Taiwan, our version of awful was an eight-day period of heavy rain, with only about 5-minute intervals of mist. Basically just enough time for you to run out and buy a new umbrella. It’s no doubt that people are feeling nostalgic about the New Year Holiday that just passed, with record-breaking high temperatures close to 30 degrees celsius.

As everything in the city is closed during the first couple of days of the New Year, us city folk flocked to the outskirts of town to visit scenic spots such as the beautiful Wu Lai Village (烏來). 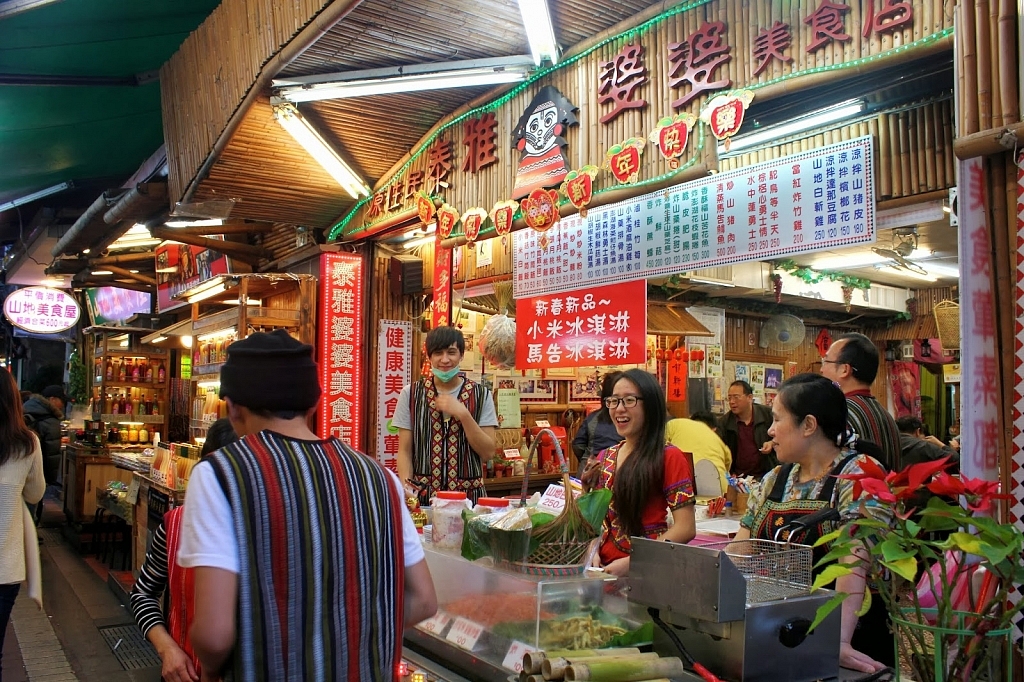 It’s as much nature (many people come for the natural hot springs) as it is intense eco-tourism, with the Atalyal Indigenous Museum marking the entrance to a whole strip of food and souvenir vendors, many of whom were selling “traditional Aboriginal food”. Some of this may be good, and some of this may be questionable. Regardless, that’s what you’ll find.

After we spent most of the day fighting through crowds, my family and I finally settled in a little restaurant (many are similar) that advertised their famous “barrel smoked chicken” (桶仔雞). 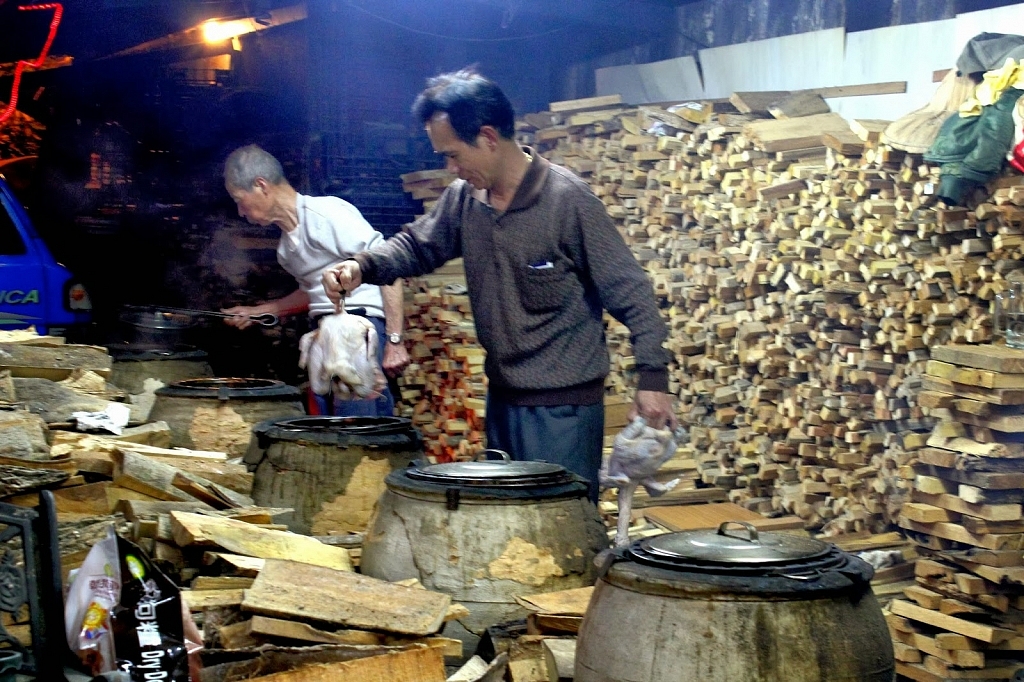 There are a bunch of barrels lined up. The chicken man puts a chicken into each barrel and lets it wood smoke for about 45 minutes. Then Bam. You get your chicken. Note that unlike in North America, head and claws are always attached. 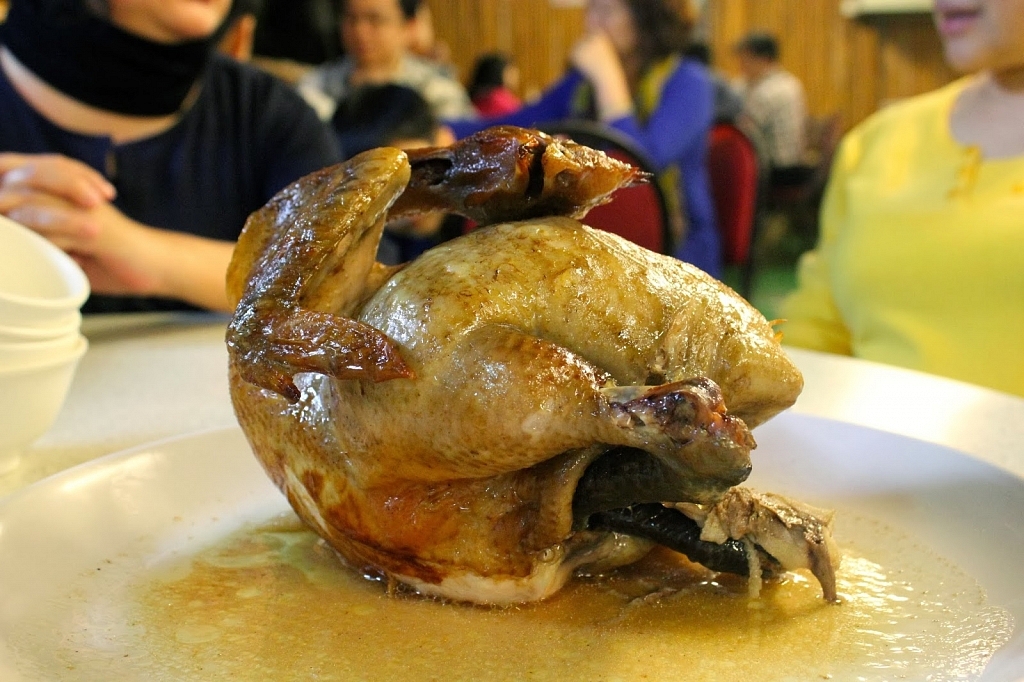 But then, they also throw you a pair of working gloves covered by plastic gloves. Having been deemed the most apt with poultry at my table (if you are reading this, I may have carved your Thanksgiving turkey before!), I was tasked with the job of tearing the poor sucker apart. Sorry little guy. 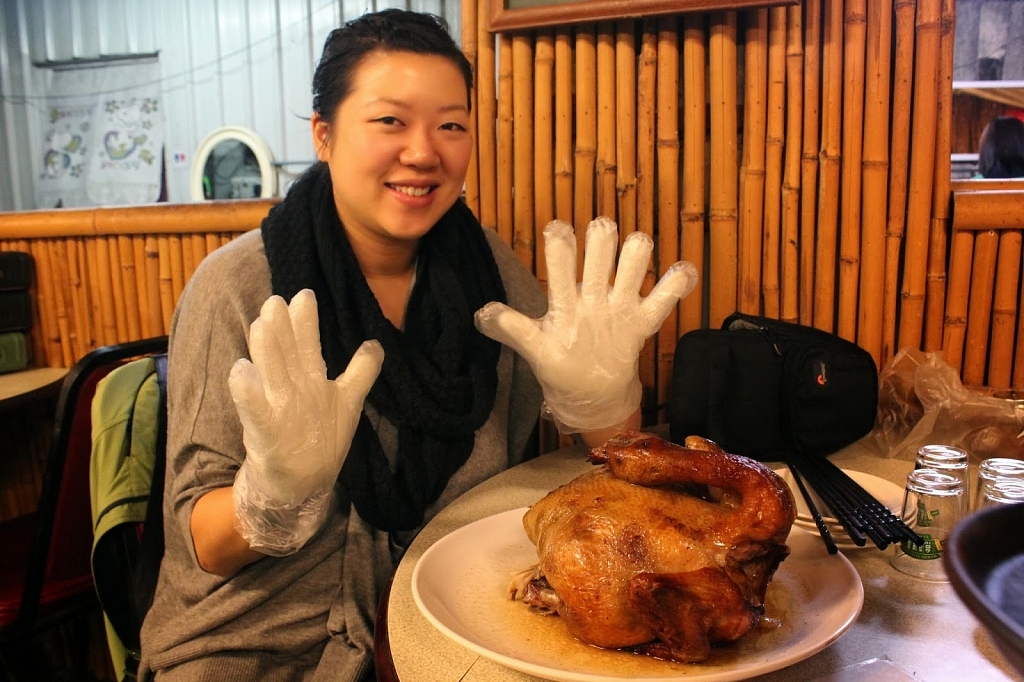 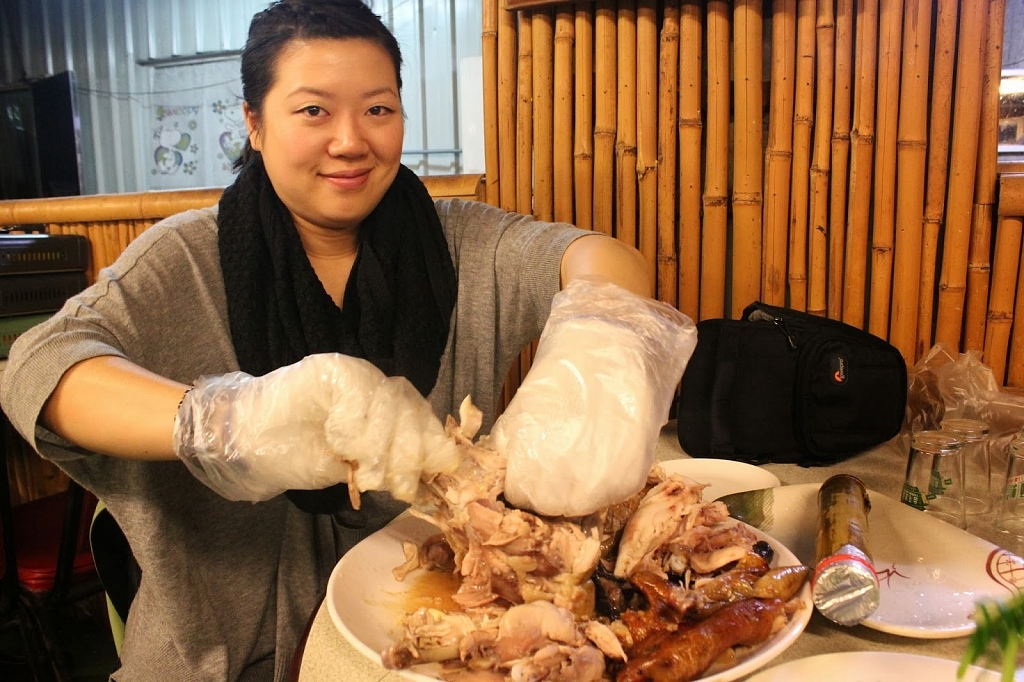 And some side dishes! Among other things, we ordered some pearl scallions fried with the chicken gizzards, and some sticky rice steamed in a bamboo canister. 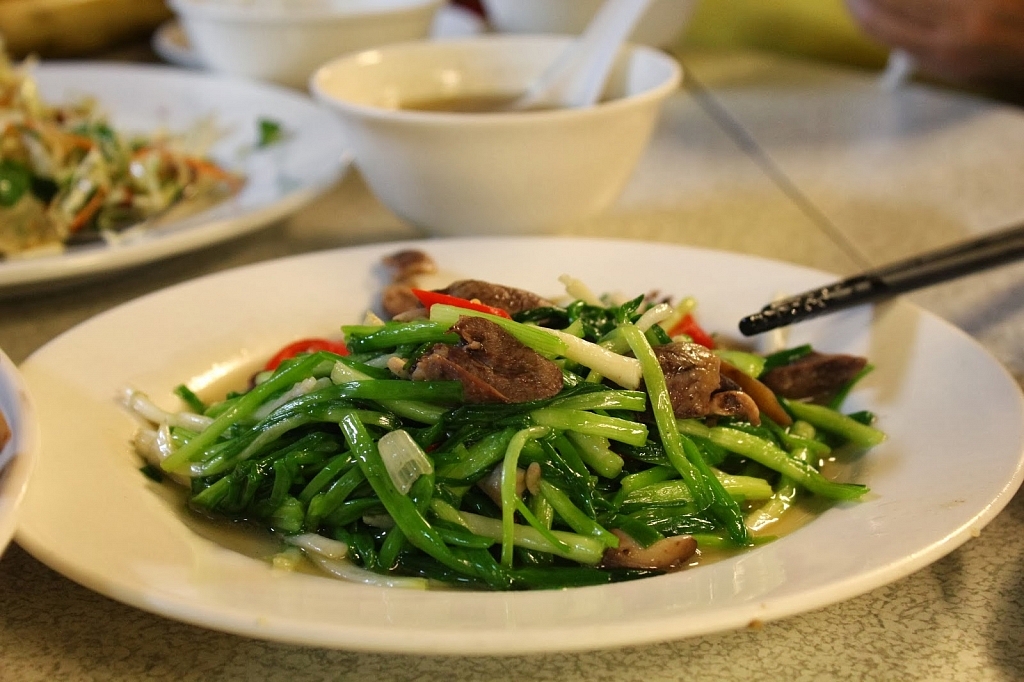 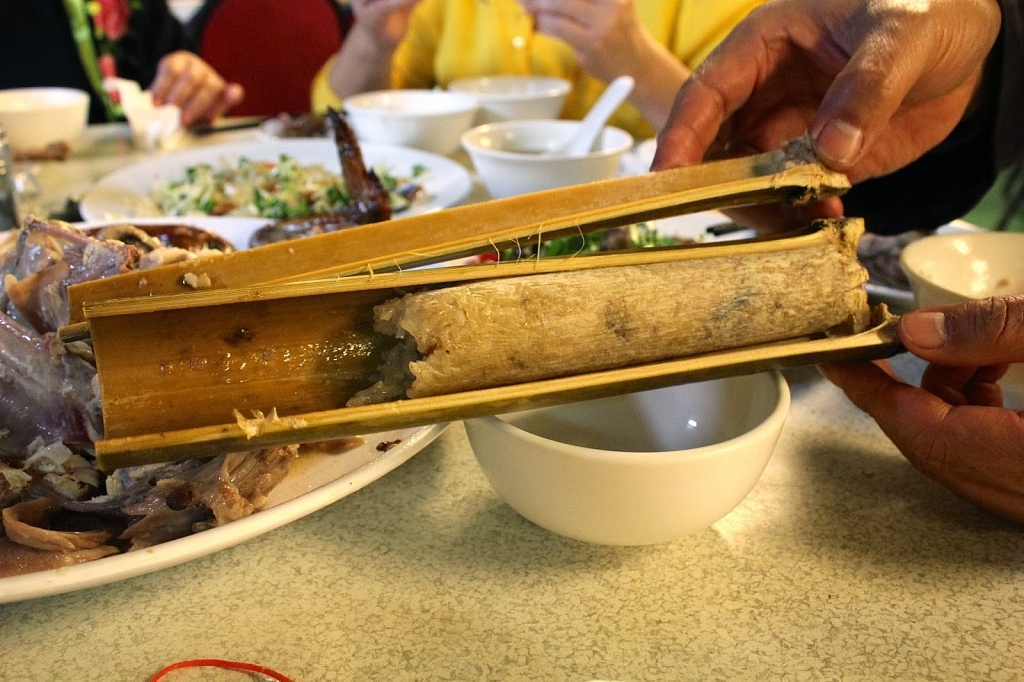 Believe it or not, two nights later, we found another one of these restaurants and did it all over again.