The Business of Pork

And a visit to Schlegelhome Farms 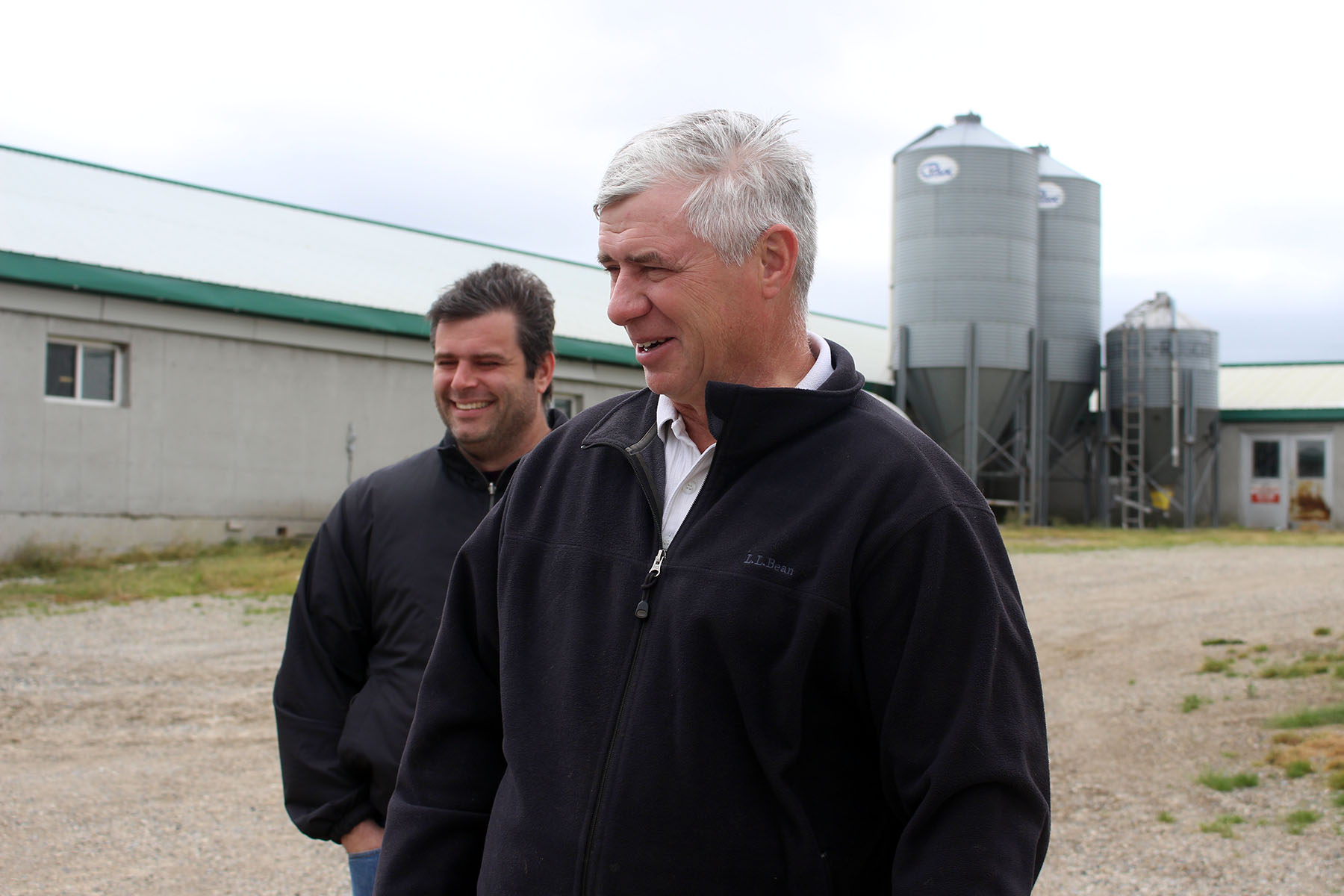 Though the sun was shining, it was noticeably chillier as I stepped out of the car at Schlegelhome Farms in Shakespeare, Ontario, just a few miles outside of Stratford. I instinctively reached for my city jacket before quickly being informed that I wouldn’t have any use for it. This was not the first time I had ventured to the source of my food, but I knew this was going to be a vastly different experience from the idyllic vegetable gardens of visits past. I was about to enter a real, live pig farm.

I’ve checked the “no” box beside the customs declaration question “Have you visited a livestock farm in the last six months?” so many times without blinking an eye. However, as each of us methodically showered our way through the series of doors, donned fresh socks, t-shirts, disposable jumpsuits, and sanitized Crocs, the implications of that question finally dawned on me. The only thing I was allowed from the outside world was my camera, and not before I double-disinfected it with swipes of Lysol. It was reassuring to see the measures they were taking to protect the health and safety of the pigs within, as well as their visitors. 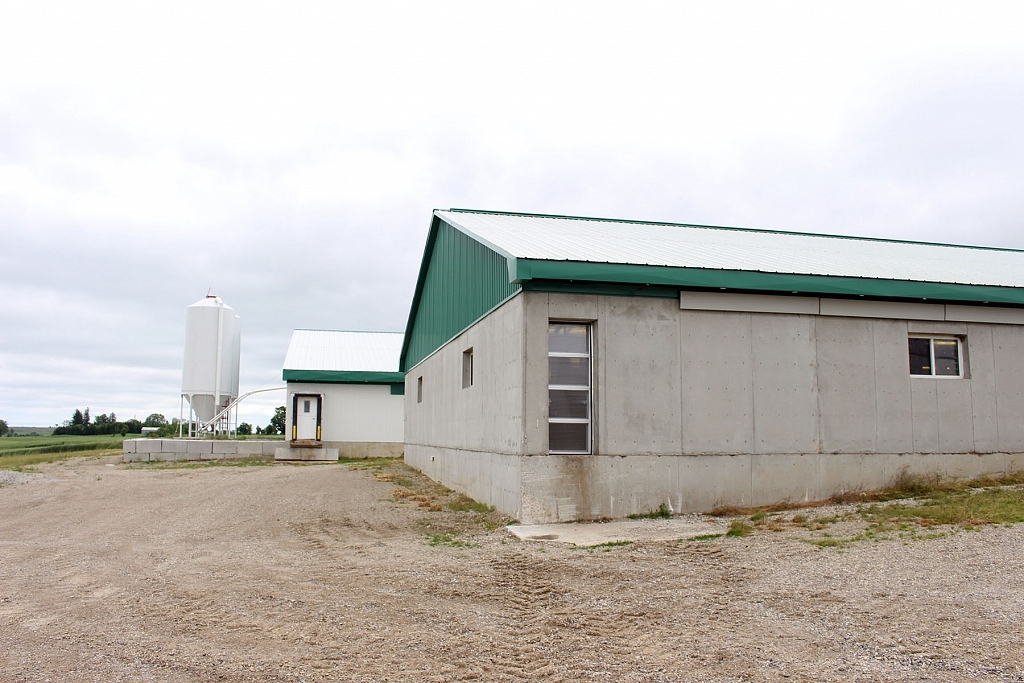 The Schlegel family has been living and farming on the same land that their great-grandparents purchased in the late 1800s. At any given time, you’ll find around 2500 sows, a few hundred piglets, and a handful of boars on the premises. Clare and Adam Schlegel, father and son owner and manager, gave us a tour of the entire farm and answered all our questions without reservation. They even had enough trust to let us watch a live piglet birth.

To put it simply, this is not an easy business. As a former president of the Canadian Pork Council, Clare has dealt with more complaints than he can count. The antibiotic debate (largely popularized by A&W’s recent campaign) is a good example. Research has shown that a high presence of antibiotics in our meat isn’t good for us, but there is a perfectly safe amount that otherwise healthy animals can be given when they’re sick, and there are strict measures in place to ensure that that the threshold isn’t exceeded.

The second big pork industry debate these days seems to be around “gestation crates” vs. “loose housing”. Complaints from animal rights’ groups about the crates being too restrictive led to the release of the National Farm Animal Care Council’s Pig Code in 2014. Among other things, these guidelines dictate that all sows in Canada must be placed in loose housing by 2024. Adam, who returned to the farm after completing an MBA and a short career in the tech industry, sees the pros and cons of both styles. The sows definitely have more mobility in the open-concept style, but it also makes it harder to keep track of the sick or malnourished ones. Currently, the farm is on track to converting the remaining gestation areas wings into loose housing at their next major renovation. They also have an impressive SowCare microchip tracking system in place that automatically allocates feed based on each pig’s needs, which will hopefully address the concern for individualized care. 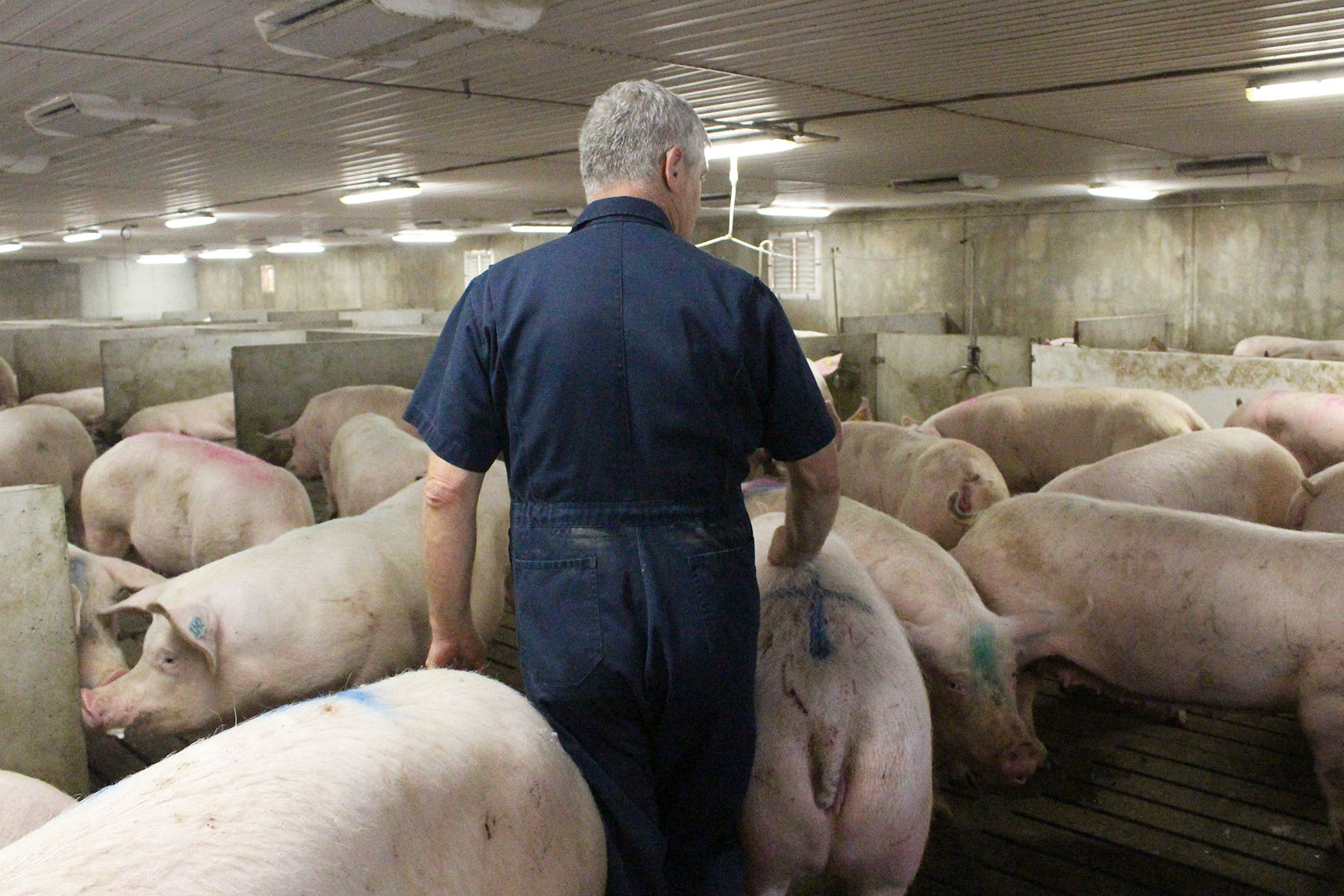 Clare with his sows in loose housing

Canadians’ love affair with pork is complicated. People love their bacon-rimmed Caesars, and people love their maple-glazed ribs, but somehow, the word “pork” itself is a bit unglamourous. I was even with someone recently who told me that they love bacon but would not be comfortable with eating pork belly…as if they were two unrelated foods. Even with the rise of the “nose to tail” movement (where chefs are trying to use every part of the animal in their dishes), most Canadians still find themselves debating between pork chops and tenderloin on a Tuesday evening at the grocery store.

I’ll just say it. Canadians don’t exactly have the most adventurous palates.

Globally, we have a slightly different picture. The biggest markets for Ontario Pork over the last few decades have been the United States, Japan and South Korea. The U.S. raise a lot of their own pork but are always in need of more and appreciate our quality, while Japan and Korea’s love of dishes like katsu don and gam ja tang runs deep. However, China’s recent economic growth and changing middle class lifestyle have now made them one of the biggest importers of pork worldwide. And though all parts of the pig are enjoyed, it’s actually the hearts, livers, stomachs and intestines that are most frequently sourced from Ontario.

All that the pork industry can do is respond to demand. As much as Clare and Adam find it hard to understand the immense appeal of offal in China, they find the high price of ribs in Canada equally incredible. They raise their pigs the best that they can, but always designing their feed and breeding for the end products in mind.

It’s natural to complain about how things could be done better, but if I’ve learned anything from this visit, it’s that this industry is highly consumer-driven and can only be as good as we collectively work together to make it. And as far as sustainability and social responsibility goes, Ontario Pork is doing a pretty good job. They became the first livestock commodity group in the province to commit to setting benchmarks in areas that measure economic, environmental, social and governance performance based on global measurement standards. And by 2024, the Pig Code will force farmers to either comply or sell their businesses off to others who have the ability to do so. It’s not going to be easy, but I have a feeling everything’s going to be okay.

Before leaving, I finally food-bloggered Adam into naming his favourite pork dish. He smiled and responded, “there’s an amazing sausage that the local abattoir makes for us with our pork. I have no idea what seasonings are in it, but it’s what I always give to friends as gifts or as a thank you for doing favours”.