A first look at the chef-driven culinary playground 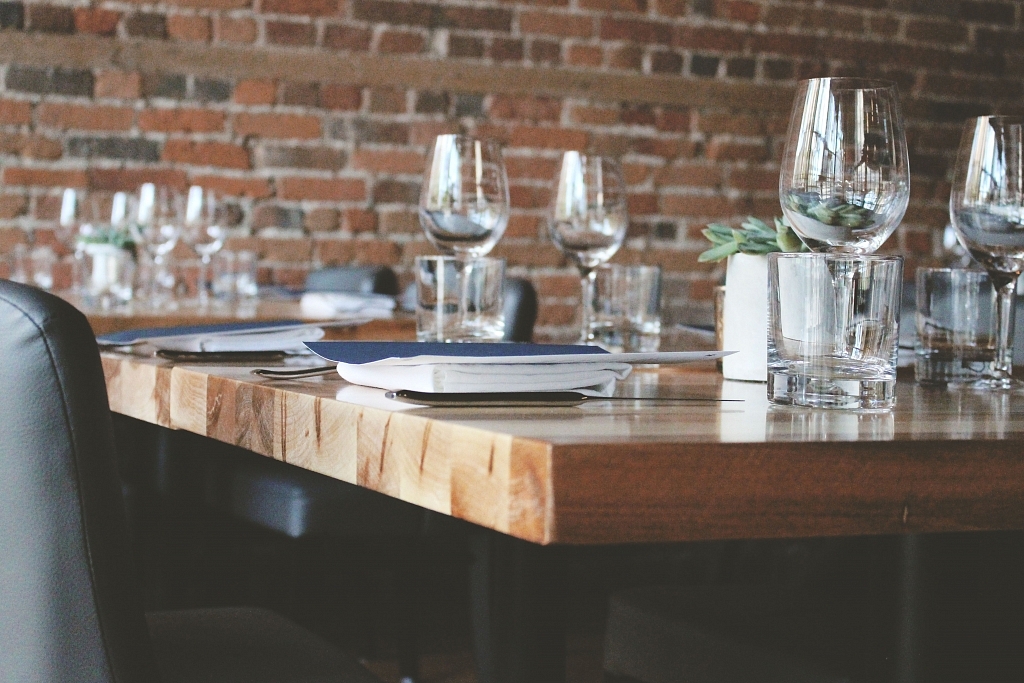 The newly-opened Copetín represents two big trends in Toronto right now: the chef-driven restaurant and the “phoenix rising from the ashes” restaurant. It takes a lot of credibility and capital to do both, but if anyone can do it, it’s Claudio Aprile.

Claudio Aprile is one of Canada’s most well-known and celebrated chefs. Born in Uruguay, and having grown up in Toronto, Aprile travelled around the world experiencing and learning different culinary styles for many years before returning to our city with a newfound sense of maturity and purpose. He quickly established himself as one of Toronto’s municipal treasures. Since his small screen debut as a MasterChef Canada judge, Claudio has now become a household name (and face). 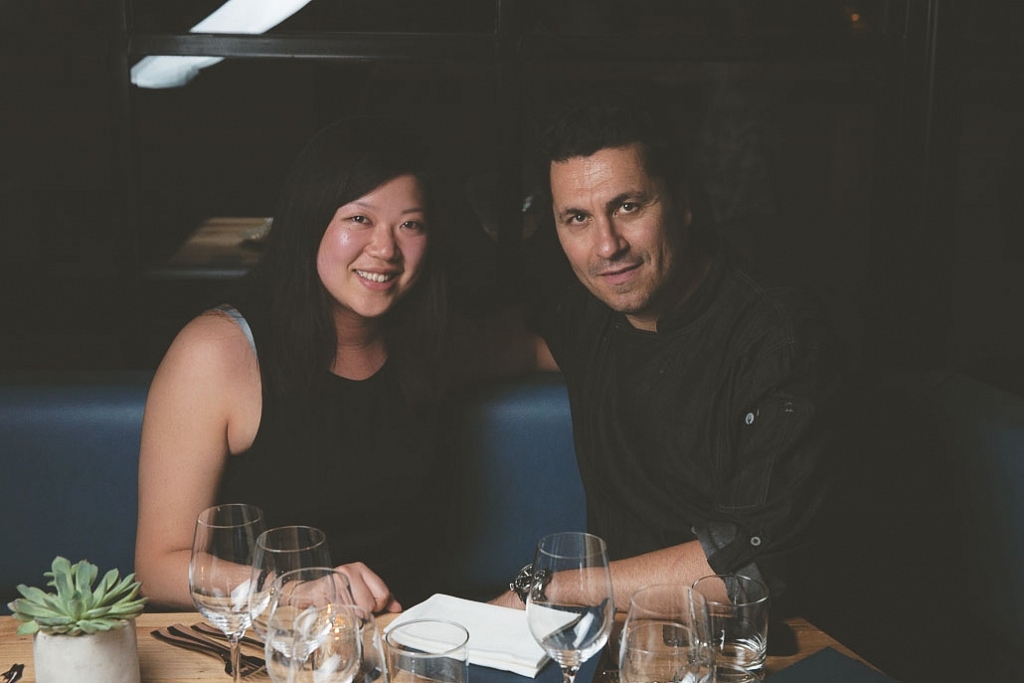 In 2010, Claudio and his team opened the original Origin restaurant at the corner of King and Church. Featuring elevated global and Asian fusion cuisine that the city had yet to experience, Origin made its way to the top of Toronto’s dining charts and was voted #1 restaurant in Toronto by several Toronto-based magazines. Two more locations opened in due time. However, over the next few years, and for a multitude of reasons, Origin started to lose a bit of its original luster. The two additional locations at Liberty Village and Bayview Village Shopping Centre closed in 2014 and 2016 respectively, while the King East flagship held on for a little while longer.

I first met Claudio last year at the German Consul General’s Forest Hill mansion. We had both been invited to experience Braun’s new line of products. I should qualify this statement: Claudio was the celebrity chef that Braun partnered with for the event while I was there to have his team feed me brunch. Over mini pancakes and blueberry compote, Claudio hinted to me that he might be working on a new project, but provided no specifics.

This summer, his “project” Copetín was finally introduced to the world. 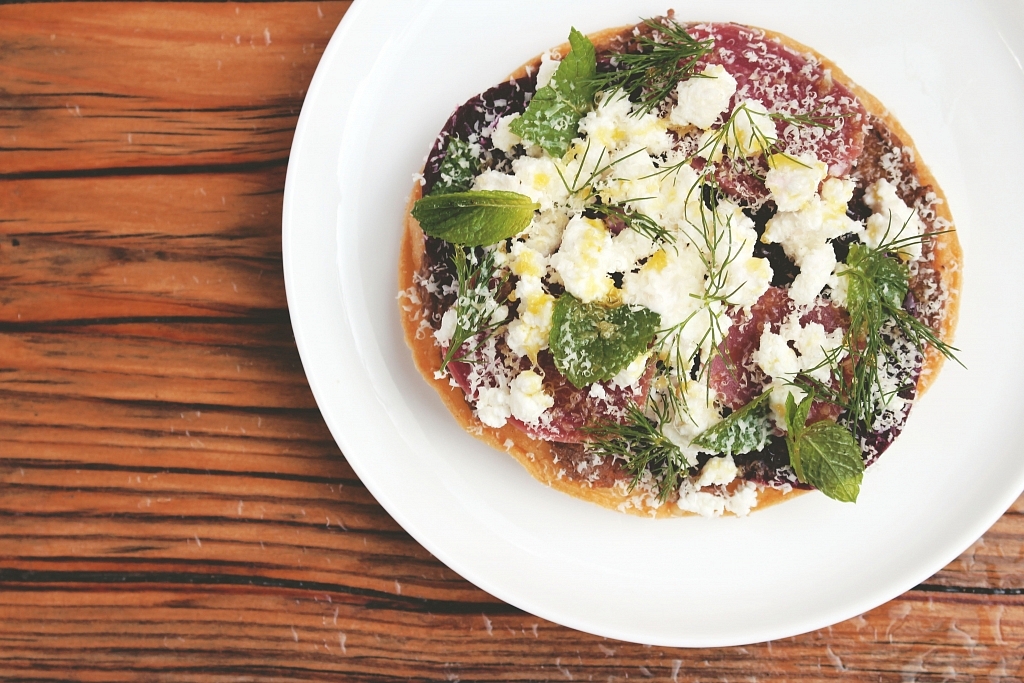 Inspired by Toronto’s culinary diversity, Claudio’s vision for Copetín was to create a culinary workshop of sorts where guests could experience a little bit of creativity and even become part of the cooking process. The name Copetín is a Latin American word that roughly and very abstractly translates to “drop-in, aperitif, community and social”. The overarching philosophy is that a good dining experience should not merely be about what you’re eating, but how you’re eating it. From the music to the various menus, a guest’s decision to sit at the patio, the lounge, at the chef’s counter or in the main dining area should be equally pleasurable, but custom-tailored to the purpose of their visit.

While Copetín is a complete overhaul from the former space, Claudio and his business partner Henry Wu have kept many members of Claudio’s loyal Origin staff. And as far as the menu goes, one of the best items is still the Duck Taco ($9), carried over as a legacy item from the former Origin menu. Classic Asian fusion at its best, the Peking duck style appetizer is served on a thin flour tortilla and topped with Hoisin, cucumber, carrot, cilantro and crème fraîche. 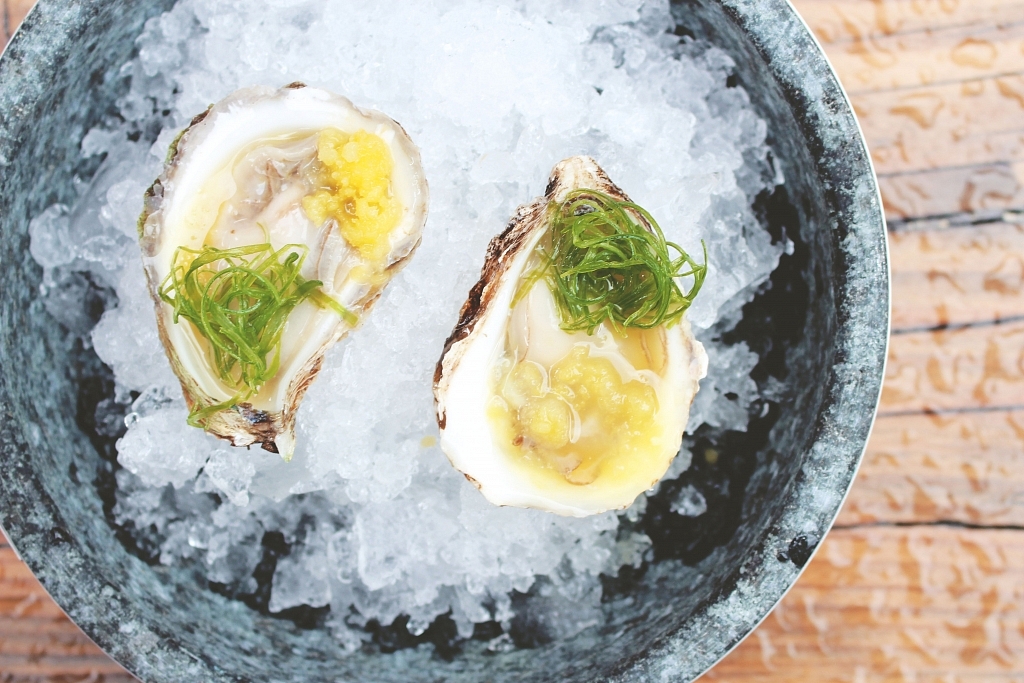 Other memorable appetizers from the lounge and patio menu include a tostata topped with beets, herbs, goat cheese and hacienda mole ($9) (though not a flavour profile for everyone), a crostini topped with creamy burrata, tomato and basil pesto ($15), and raw oysters on the halfshell with a “kalamansi slush”. The Korean Fried Chicken with pickled daikon and cashew ($9) is also worth ordering. 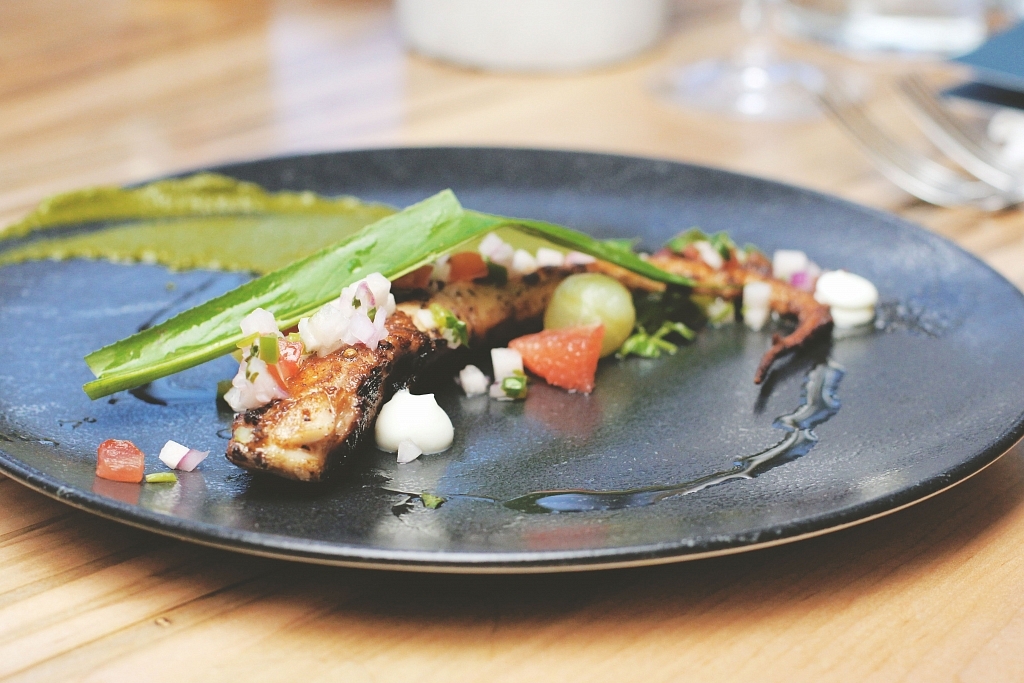 In the main dining room, the beautiful Charcoal Grilled Octopus with a smear of green curry, dollops of crème fraîche, jicama, grapefruit and compressed gin-infused cucumbers ($17) is the restaurant’s most-photographed dish. The beet salad with stracciatella, salsa verde, sumac and dates, with a pour over of almond milk ($15) is also great choice to start the meal. For something more substantial, try the Sea Bream with chorizo, asparagus, olive and clams ($35) or the Tea Smoked Squab ($39) served with shitake mushrooms, sunflower seeds, farro and plum. My favourite dish from the dinner menu? The Italian-inspired Ricotta Gnudi served with spring peas, artichokes, and a Reggiano broth ($26). 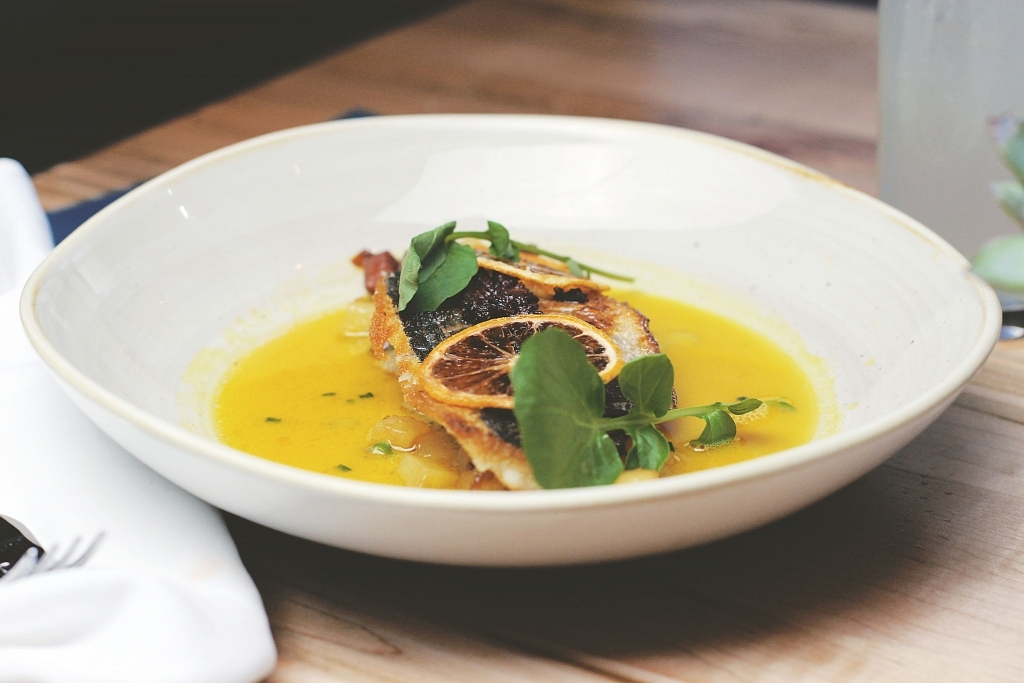 The desserts on the dinner menu can best be described as low-key avant-garde. Currently, the two signature desserts are a caramelized and deconstructed Tres Leches Cake with cajeta, charred banana, and a mole gelato ($13) and a fun “Citrus Moon” dessert ($21): a yuzu-driven citrus cake encapsulated in a dome of white chocolate, designed to be smashed tableside. 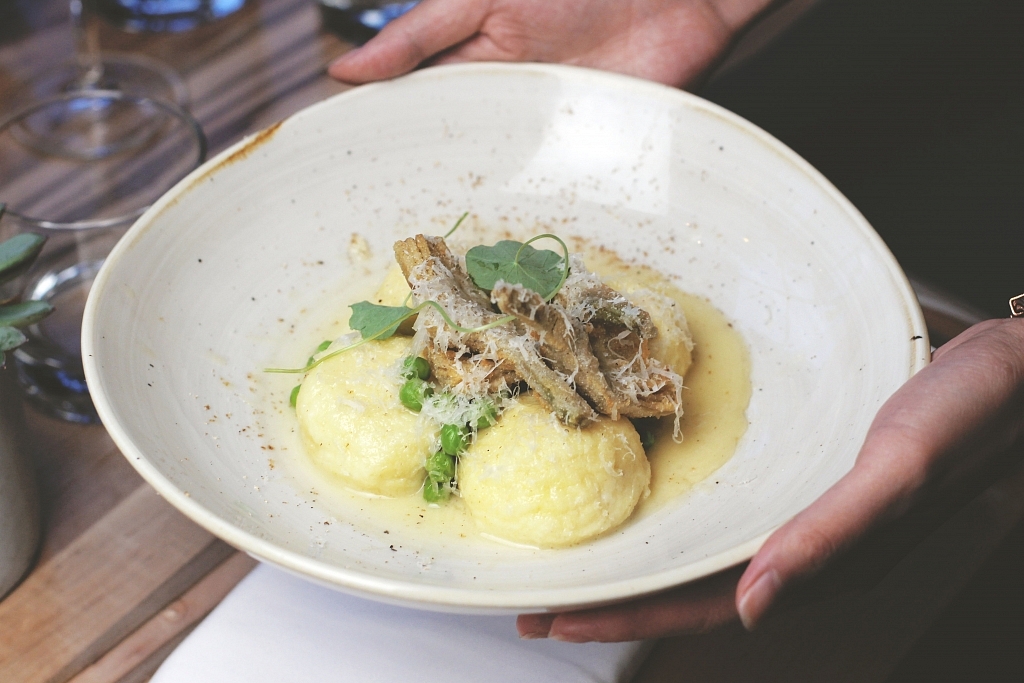 The wine list is nothing to write home about, but the cocktails are some of the best in the city. Manuel Contreras Palma (who goes by Manny or occasionally by his Instagram handle, Mannyxologist) has worked together with Claudio and The Botanist Islay Dry Gin to create a wonderful, loosely South American cocktail menu. The Sour Saint ($13) is made with Aperol, strawberry-Thai basil syrup, lemon and egg whites and has a lovely feminine, not-too-sweet quality to it. The refreshing Pollenator features chamomile-infused Bombay Sapphire gin, yuzu juice, maple syrup and peach bitters ($16). As the patio sign clearly indicates, The Botanist Gin is the restaurant’s signature liquor. However, if you’re looking for something different, ask for something with tequila, Manny’s signature liquor. As a special treat for anyone reading this, try asking specifically for “My Neighbour’s Margarita” and I guarantee you will not be disappointed. 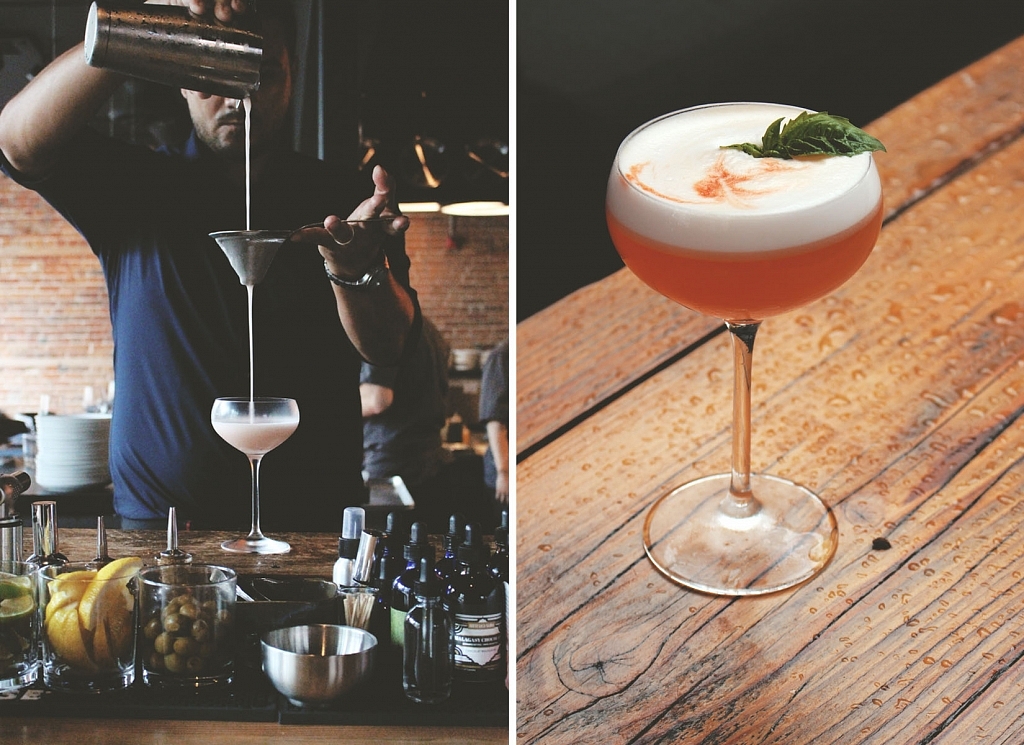 Opening a restaurant in Toronto isn’t easy. However, biting the bullet to shut down one operation in order to launch a new one (check out my Estia story as well) is arguably even more challenging. The weight of expectations and opinions from investors, fans, restaurant staff, media, and the local community (the Berczy Park and St. Lawrence residents are a particularly discerning bunch) can be overwhelming. No man is an island, after all. However, from a personal achievement perspective, Claudio Aprile is doing about as well as he can with Copetín. From the obvious influences (his love of music displayed through some of favourite records and a giant commissioned Stikki Peaches portrait of Johnny Cash on the wall)  to more subtle influences (his intense love of the Japanese citrus fruit Yuzu, found in many of his dishes), eating at Copetín will be the closest you can get to experiencing a chef’s personal vision in Toronto today.

Final Note: The food at Copetin could be awful, and Claudio Aprile and MasterChef Canada fans would probably still come. I’m pleased to report that that is far from the case. Copetin is open for lunch, dinner and weekend brunch, and cocktails whenever you need an excuse to visit. For more information, please visit their website, Twitter, Facebook or Instagram.

Disclaimer: This is not a restaurant review. Menu items are subject to change.