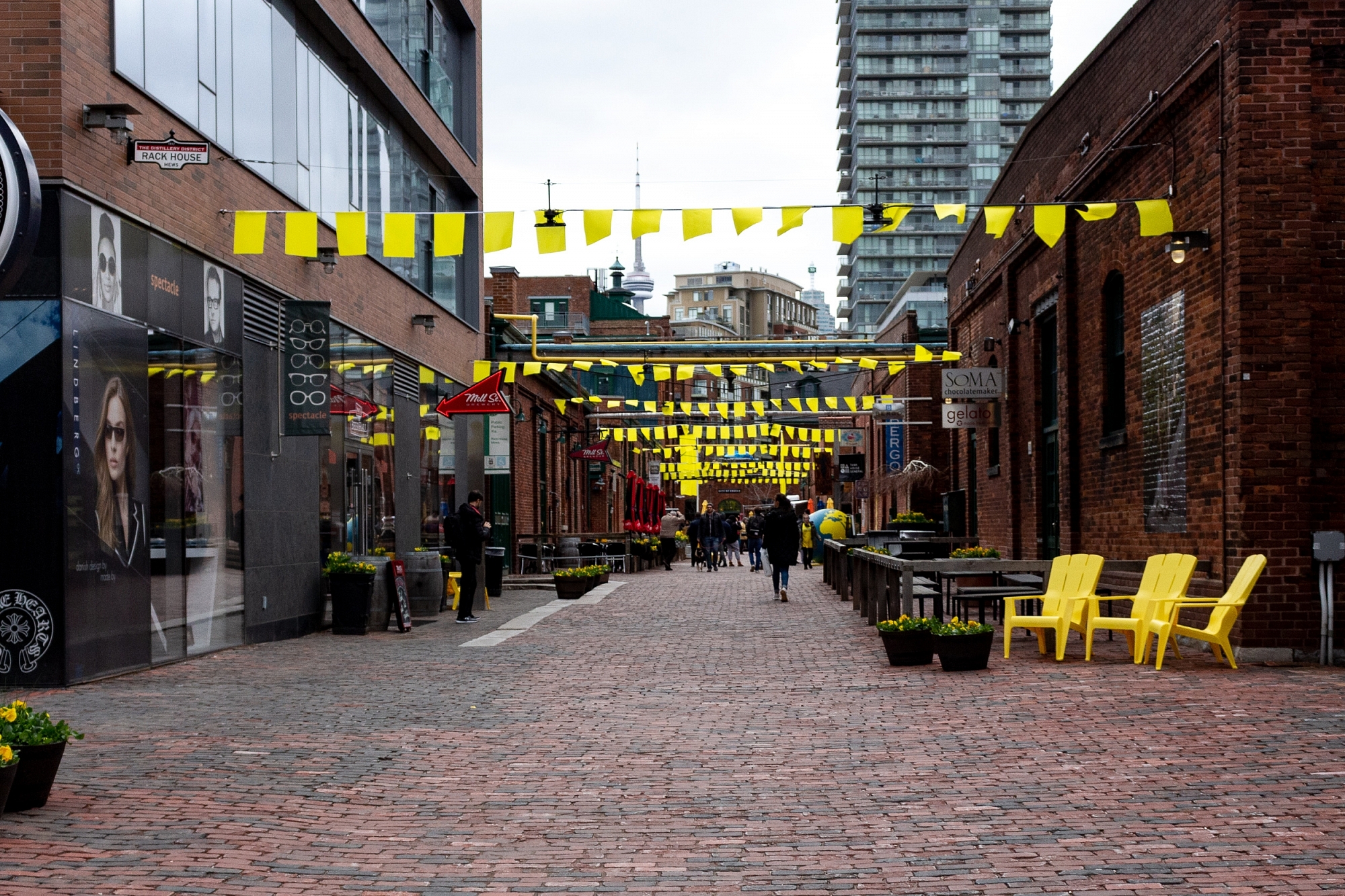 And how to maximize your day of exploration

Whether it’s for the Christmas Market in December, the Toronto Light Show in February, or simply a little post-dinner stroll, the Distillery District is a must-visit for every Toronto tourist. As a historical site, the Distillery District has been around since the 1800’s, but has only been “developed” as a hot spot for design and culture since the 1990’s. The Canary District is a much newer development (since 2015) but is starting to become a cute little spot in its own right. Here’s a little guide on how to best spend your day in this area.

How long should you spend here?

If you’re not attending a specific event in this area, you should budget 3 hours to spend – 2 hours for a nice meal (I would suggest either brunch or lunch), and an hour to walk through the shops and installations with a coffee or gelato in hand. Don’t plan on coming too early either – some shops open at 10:00 AM most days, but there isn’t much happening before 11:00 AM. Similarly, some restaurants stay open later for dinner but the Distillery District itself “closes” at 7:00 or 8:00 PM most days, and 6:00 PM on Sundays. I would recommend eating dinner somewhere in Downtown Toronto instead.

The Canary District was originally created to serve as the site of the 2015 Pan/Parapan Am Games Athletes Village. After the Games, it was converted to a 82,000 square foot YMCA, an 18 acre Corktown Common park, condos, and George Brown College’s first student residence. Frankly, the District is still pretty new and carving out its identity. However, it’s worth a short walk through if only to see modern urban planning in action.

Start with brunch at Souk Table (they open at 11:00 AM). This modern Middle Eastern restaurant is equally perfect for families, couples, and individuals. It’s well-designed so you can just as easily grab a Turkish coffee and saj pita wrap to go or sit down for a leisurely meal of eggs, beef kefta, hummus, and/or Shakshuka. I am always in the mood for Souk Table, but if you don’t happen to be, you can always grab a coffee from Dark Horse Espresso Bar or some Pad Thai at SukhoThai next door as well.

At some point, you will probably want to go into the Distillery District for a little “something something” in the form of coffee and/or gelato. Look no further than one of my favourite shops in all of Toronto, SOMA Chocolatemaker. Soma does have other locations, but this one is particularly charming. Their espresso, gelato, and chocolate creations are all fantastic, and it’s a great place to buy small yet elegant host and hostess gifts. If you’re visiting in winter, I would suggest their rich and spicy Mexican hot chocolate. What a treat!

Balzac’s is another spot for local, high quality coffee. The only reason I would suggest otherwise is because there are various Balzac’s locations all over Downtown Toronto, including at the UP Express. However, this one is really luxurious in its decor.

If you have children, it is likely that you will end up at another great dessert place, The Sweet Escape, without any guidance. Their ice cream and macarons are very colourful, and they also happen to be located near a seating area close to the public washrooms!

Best Restaurants in the Distillery District

As with many tourist destinations, everything in the Distillery District is very overpriced, so brace yourself. If you’re wearing a floral dress and strappy sandals, you should make a reservation at Cluny Bistro for some chic French fare. If you’re wearing jeans and ball cap, you should check out Mill Street Pub and Beer Hall for some local beer and flatbreads. El Catrin is fun for tacos and fresh guacamole, but I don’t enjoy their service. Archeo is one of those restaurants that is perfectly fine and an excellent venue for a corporate event, but the food isn’t particularly memorable. I will try to update this section when I have an opportunity to try the new-ish establishments, Boku Noodle Bar and Madrina Bar y Tapas.

Best Shops in the Distillery District

After you have taken all of the necessary photos against the brick walls that you need for Instagram, you should do some shopping of your own.

My favourite stores are Hoi Boi for stylish minimalist pieces, Red Canoe for non-tacky “Made in Canada” gifts, Tank House General for clothing and jewellery, and Mini Mioche for gifts for little ones. I also think that the whimsical John Fluevog shoe store is worth checking out, as well as the Deciem store for skincare products (though they have are stores everywhere in Toronto now that I frequent regularly!).

But wait, is there actually any…distilling?

While the Distillery District is no longer one of the most important distillers in the British Empire, there are still a few places here that are producing alcohol in interesting ways. First, Mill Street Pub and Beer Hall, mentioned above, is a nice and simple Toronto craft(ish) brewery. You can “tour” but just treat it like a restaurant. Second, Izumi is a sake brewery that is bringing traditional Japanese methods to North America. Their tasting tours need to be booked in advance, and cost $15 per person. Finally, there is Spirit of York, a “grain to glass” distiller of spirits like gin, vodka and aquavit (a Norwegian favourite). Their tasting room is open from 12:00 PM to 9:00 PM, and you can pay for flights of three spirits starting at $10.

A great way to plan your Toronto day is to start off near the St. Lawrence Market (especially because its open much earlier) and take a 15-20 minute stroll down King Street East or Front Street East over into the Distillery and Canary Districts. You can also take the 504 King streetcar and get off at Parliament Street. Avoid driving if you can, as it is expensive and the Distillery District is limited to pedestrian-only traffic. On your walk, you can also check out the Enoch Turner Schoolhouse Museum which commemorates the first free school in Toronto (a great spot for a wedding too!) and St. Paul’s Basilica, the first Roman Catholic Church in Toronto.

Bonus trip: If the weather is really nice, it’s worth your while to take the 10-minute walk down to Cherry Beach, one of Toronto’s rare sandy beaches that you don’t have to travel to the Islands to find!

P.S. If you’re wondering about all the yellow accents, some of these photos were taken in April during a special event to support the Canadian Cancer Society’s #DaffodilCampaign. It was a really fun display.