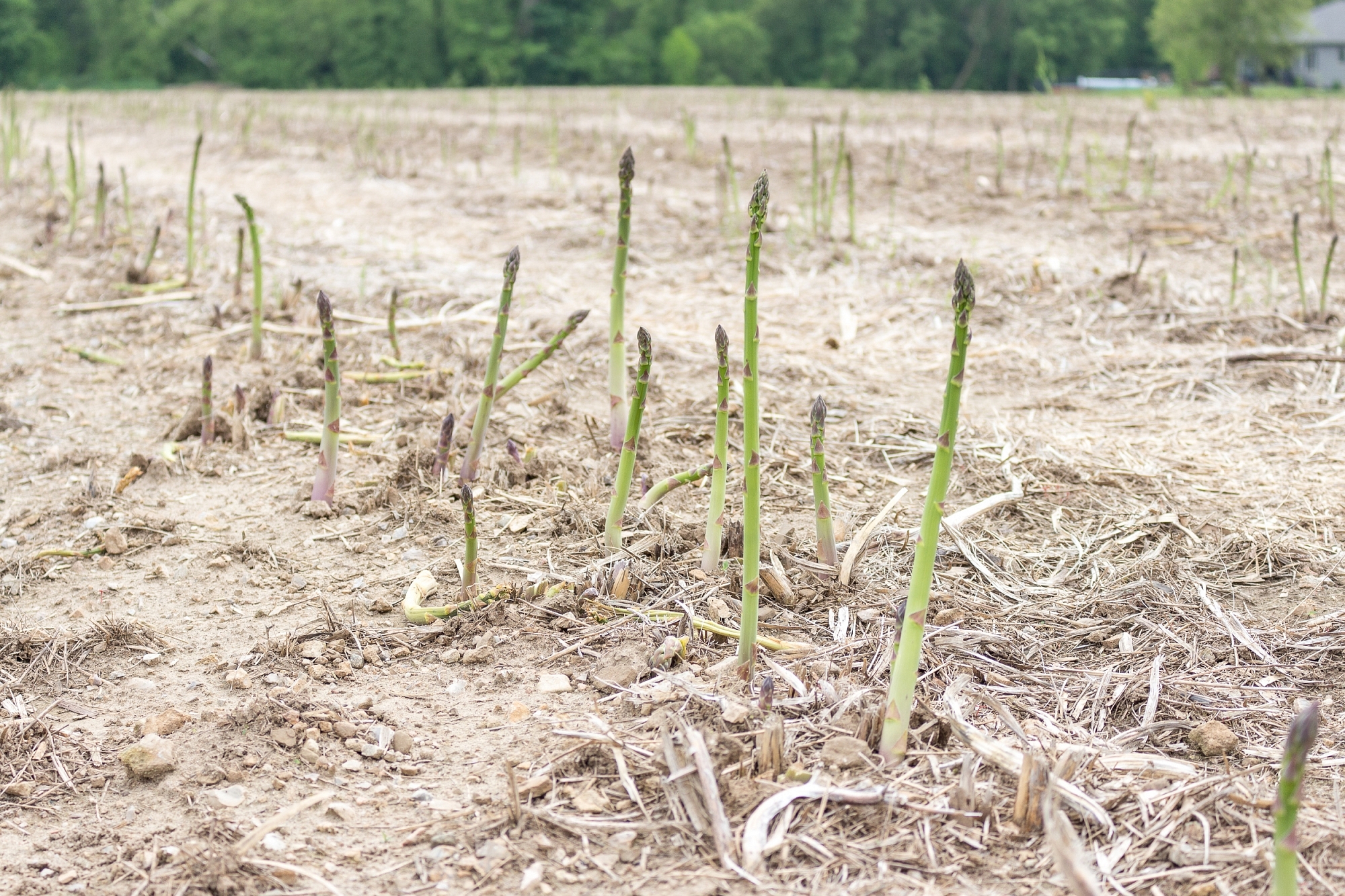 Everything You’ve Ever Wanted to Know about Asparagus

And our adventures on board the "Asaparbus"

Imagine this scene: two dozen bloggers and influencers, their +1’s and a camera crew, running around a sandy field, bending and snapping (like Reese Witherspoon) funny little green sticks growing out of the ground, all while hopping Minesweeper style to avoid stepping on the aforementioned green sticks. Out of context, this scenario doesn’t make any sense. Within context, this can only mean one thing. The Return of the Asparabus!

I don’t imagine the name requires much explanation (my friend says to her husband, “Annie’s on the Asparabus! It’s a bus that…” –“I get it,” he says). Basically, it’s a creative marketing effort to promote the great work of local asparagus farmers through a little hands-on touring and tasting. I have been trying to join in this adventure for years and was delighted when The Foodies Group and The Asparagus Farmers of Ontario finally arranged a Saturday itinerary so I could make it. For 2019, the destination was Norfolk County (read about my last Norfolk experience here). We spent half the day at Welsh Brothers’ Farms (our host Charlie is pictured below), learning about the entire growing process of the asparagus plant. We then sat back and enjoyed a lovely asparagus-themed lunch at Bonnieheath Estate Lavender & Winery, prepared by Chef Tracy Winkworth.

I’m sharing a few photos of our Asparabus adventures along with the best asparagus facts (asparafacts?) I learned along the way. I eat asparagus every spring, but never with any real intention. Since this trip, I have been eating asparagus every day with the greatest verocity (I have a simple recipe for asparagus and fennel crostini you may like), and I can’t wait to continue experimenting with asparagus recipes over the next few weeks.

Here are the top 10 things I learned:

A single stalk of asparagus usually grows between 5-6 inches a day.

It’s actually possible for a single stalk of asparagus to grow up to 10 inches in a 24-hour window. This sounds insane to me. But it also explains why it is a frantic daily harvest during the entire two months of May and June each year. The nature of the way these things grow also means that they do have to be harvested with a knife by hand. They’ve come up with a pretty efficient way of doing so:

It takes three years to grow asparagus from seed to harvest.

While that may seem like a long time, asparagus is a perennial plant. Once they start shooting up, asparagus plants can be harvested each spring for up to 20 whopping years. So what happens in the first two years? Read on.

If left unattended and uncut, asparagus grows into a crazy fern bush thing.

Yeah, I had no idea either. In the first year after planting asparagus, you have to let them grow into this thing called a “frond”. Some people even choose to keep these ferns as house plants! Check out this photo. In the second year, there’s a little crazy fern action, but you may also get a few spears.

Everyone makes “asparagus pee” but only about 25% of the population can smell it.

I’m not laughing, you’re laughing! Many individuals notice the terrible smell of urine after eating asparagus, but maybe not as many as you think. Scientific studies have confirmed that those who don’t smell the pungent odour have a genetic condition called “specific anosmia”, which I guess many do. If you can smell it, you might think that 25% seems like a low percentage, but it might be because the smell is so terrible that people who can smell it can’t stop yapping about it.

Over 90% of asparagus grown in Canada is a variety called “Guelph Millenium”.

Why “Guelph” Millenium? This particular breed of asparagus was developed at the University of Guelph. It’s adapted to colder climates, produces higher yields than other varieties, and is long lived.

China is the number one grower of asparagus in the world.

Although statistics seem to be all over the place, the surface area devoted to planting asparagus in China covers around 93,000 thousand hectares (although there is some debate as to how much is actually grown), which is about 39% of the global surface area devoted to asparagus planting. The next closest competitors are Peru with about 28,000 hectares in production, while Mexico, Germany, and the U.S. are close behind (fun bonus fact: the German Asparagus Season is called “Spargelzeit”).

The irony of this situation is that I can hardly think of any good Chinese asparagus recipes. It seems that asparagus is consumed and enjoyed in China, but mostly in Western-style dishes. I have, however, started using asparagus in the place of long green beans in some of my Chinese recipes, and it’s excellent.

Asparagus originated in the Mediterranean (Greek and Romans were the first to cultivate it) so it makes sense that they can tolerate salinity better than most plants you have in your garden. Farmers used to use salt as a safer and healthy alternative to chemical and other herbicides, but it does make it difficult if you want to grow other plants nearby. It’s also really hard to water asparagus if there is too much of a salty crust on the soil.

Each spear of asparagus has only four calories.

This is a super healthy vegetable, y’all. Let’s first talk about what it doesn’t have. It doesn’t have any fat, and it’s very low in sodium.

Asparagus is high in so many essential nutrients.

Asparagus is extremely high in folate, which is very vital to cell growth and DNA formation (especially to promote healthy pregnancies). It possesses small amounts of micronutrients, including iron, zinc and riboflavin. Asparagus is also an excellent source of Vitamin K, which is an essential ingredient in blood clotting and bone health. Asparagus is particularly high in insoluble fiber, which is great for digestion. Finally, it’s also high in antioxidants, including Vitamin E, Vitamin C, and glutathione.

You can do a lot more with asparagus than just wrapping it in bacon (although that is always a good idea).

Obviously, the point of the asparagus lunch was to showcase the versatility of the asparagus plant in cooking, but Chef Tracy really created a meal that went beyond my expectations. She made asparagus guacamole, asparagus chimichurri (which went great with her battered and deep fried perch), pickled asparagus, creamy asparagus soup, asparagus “fries” which were coated in gluten-free cornmeal and other crunchy bits, a kale salad with raw shaved asparagus, grilled composed asparagus, and of course, a little bit of bacon-wrapped asparagus for good measure.

I’ll leave you with a few last photos of our epic meal (including bread pudding and sour cream lavender ice cream made from the estate’s lavender, and our plates modeled by Emilia) and the beautiful Bonnieheath Estate.