Montréal is a vibrant, sophisticated, and all-around wonderful Canadian city. I have visited many times with friends and family and this place has something new to offer each time. Montréal does winter very well with enough tire d’érable (maple taffy) and winter festivals to keep one occupied. However, there is nothing quite like walking through Montréal’s Jean Talon Market in the summer, followed by a picnic on Mount Royal or a street performance enjoyed from underneath a striped patio umbrella. It is one of the most unique food destinations in the world and I’ve grouped my recommendations into themes to reflect the city’s long-standing culinary cultural mosaic. I’ve also enlisted the help of my friends Sean Yaphe and Krishna Ruthnum (long-time Montréal dwellers) to strengthen my suggestions below. After the two of them fought it out over who had the best terrasse and student bar beer selection for several months, the three of us have finally put together a list we can all agree on, for your Montréal eating needs.

Here are the top 5 categories of things you need to eat in Montréal:

Montréal’s Jewish community hails from all over the world, and brought their regional specialities with them in a big way. The first Jewish residents arrived in the late 1700’s from Britain after the British Conquest, followed shortly in the 20th Century by Ashkenazi Jews who came to Canada primarily to escape hardship in their home countries. Many other waves of Jewish immigration and migration over the last century have created an interesting mosaic of Jewish culture throughout the city. As a result, Montreal has many iconic Jewish food businesses, many of which are Jewish delis (the documentary Deli Man is a great introduction!). The smoked meat and pickles are very key. Then, there are the bagels. Unlike New York-style bagels, traditional Montréal-style bagels are smaller, thinner, sweeter and denser and are always baked in wood-fired ovens. I would highly recommend that you pick up a dozen for friends at home and/or eat somewhere where they serve them.

Places to try: Fairmount Bagel (Krishna’s favourite, and the first bagel to make it to outer space!) St- Viateur Bagel, Schwart’z Deli (for the smoked meat), Beauty’s Luncheonette (try the “Beauty’s Special”, pictured below, which is a St-Viateur bagel with lox, cream cheese, tomato and onion), and Moishes (Sean says: this place has been doing the steakhouse right for over 75 years. A Montréal staple.). You can also check out some of the great Jewish food walking tours offered by locals. 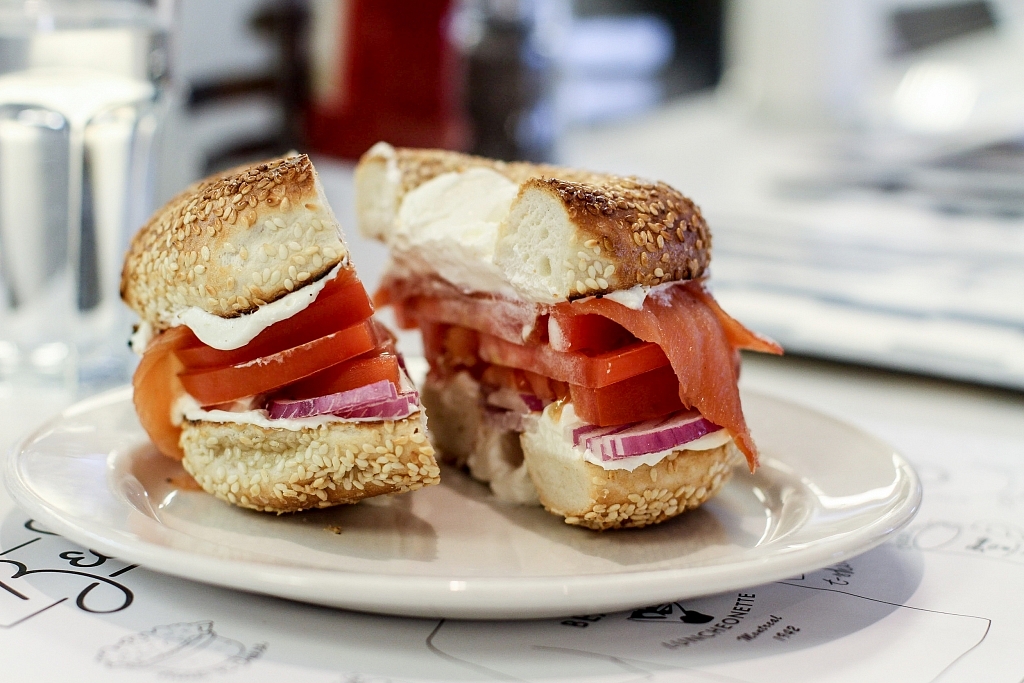 A frequent reaction that many people have when visiting this city is to remark that stepping into Montréal feels a lot like stepping into France. And with historical cultural ties and an increasing French ex-pat population moving to Canada for cheaper rent and to enjoy the Canadian landscape (while still speaking their own language), I can certainly see why. The tension between the French and English has been a prominent story in our country’s history for quite some time, but the tension between the French-Canadians and the French-French is perhaps even more nuanced and complicated. However, while the Québecois generally like to distance themselves from French music and arts scene in favour of their own, thankfully, it won’t stop most of them from enjoying French cuisine.

Places to try: For something more casual, try Café Cherrier (Sean says: it’s the perfect French bistro atmosphere and food. In the summer, the terrasse is ideal for enjoying the weather and people-watching on Saint-Denis.), Boris Bistro (Krishna says: Sorry Sean, but Boris is actually the perfect casual French bistro and has my favourite terrasse in the city – a beautiful tree-covered heritage courtyard facing McGill St.), or  La Fabrique (Krishna says: the space is rustic, the food and wine is served elegantly and the service is the best I’ve ever had in Montreal). For something less casual, try Restaurant Bonaparte, a nice, upscale restaurant to come to for a pre-show or celebratory dinner or Lemeac (Krishna says: An incontournable (must-visit) in Montréal, and everyone must go there at least once in their life to achieve culinary enlightenment. Also, Lemeac was the pioneer of the late “prix-fixe” menu, which in my opinion is the best way to try them out – a selection of their greatest hits for $28 after 10 pm.)

While the individual food items associated with Québec are easy enough to list (poutine, anything made with maple syrup, tourtière, and pea soup), the broad categorical definition is a little more challenging. Although few would describe it as such today, most food we would identify as “traditional Québecois food” is essentially food from Canada’s 250-year Fur Trading Era. These first European settlers used methods from their French and Irish/British roots and adapted them to create new-ish dishes made with local ingredients (while reluctantly accepting some much-needed assistance from Aboriginal communities). Most of this food has a very high fat content (lard in everything) in order to survive the long cold winters in the Canadian wilderness. Throw a log cabin, a pair of colourful wool socks, and a fiddle into the mix, and you’ll be completely transported. 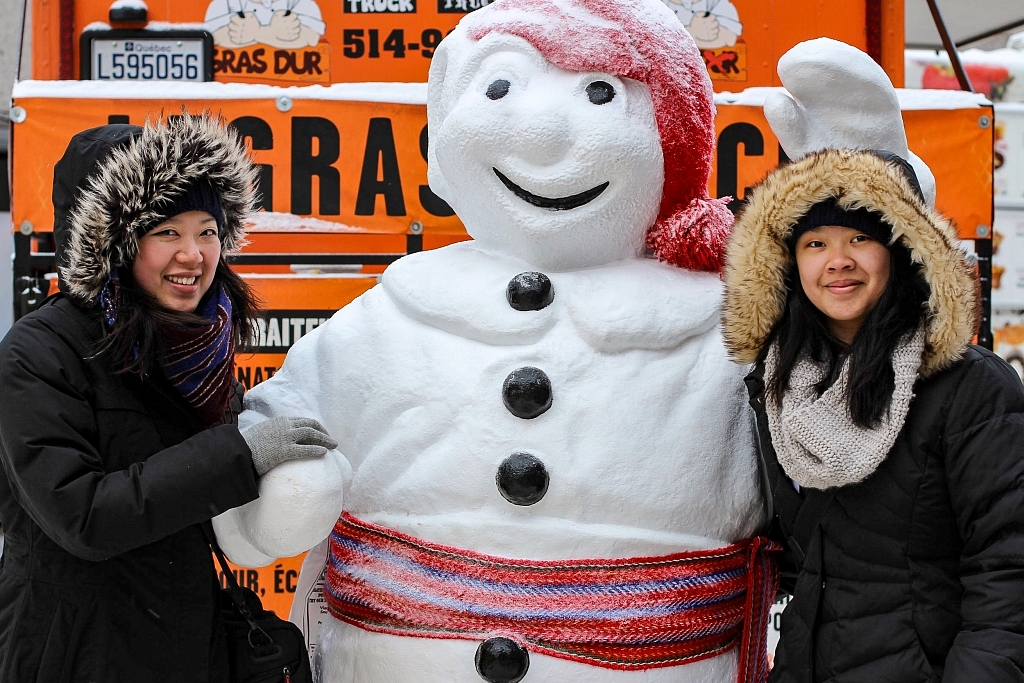 Visit any coffee shop in Montréal and you are likely to spot a study group in one corner, a teaching assistant grading papers in another, and five students working behind the counter. This is because Montréal has the highest number of university students per capita (attending 11 universities!) among all metropolitan areas in North America and even ranks higher than Boston, the self-proclaimed intellectual capital of the United States. Student life here is great, and there are so many places that cater to the student lifestyle and budget.

Places to try: For a good poutine fix, try the student-overrun La Banquise or Poutineville. For massive portions of Portuguese chicken, try Ma Poulet Mouillé (Krishna says: rumour has it that a chef working at Romados (the more famous Portuguese churrasqueira down the street) stole the recipes and improved them.) If you’re looking for some caffeine, inspiration and maybe free wifi, visit Crew Collective & Cafe, a student-friendly concept space situated in an old bank (pictured below), or other cafes like Paquebot, Pikolo Espresso Bar and Cafe Hubolt. If you’re staying a little later in the evening, hit up Benelux, a student-friendly micro-brasserie, located close to many universities, or the tucked-away Le Sainte-Élisabeth. As a late night bonus, Krishna recommends hitting up La Distillerie for cocktails served in mason jars (they also serve goldfish crackers, beef jerky and popcorn as snacks). 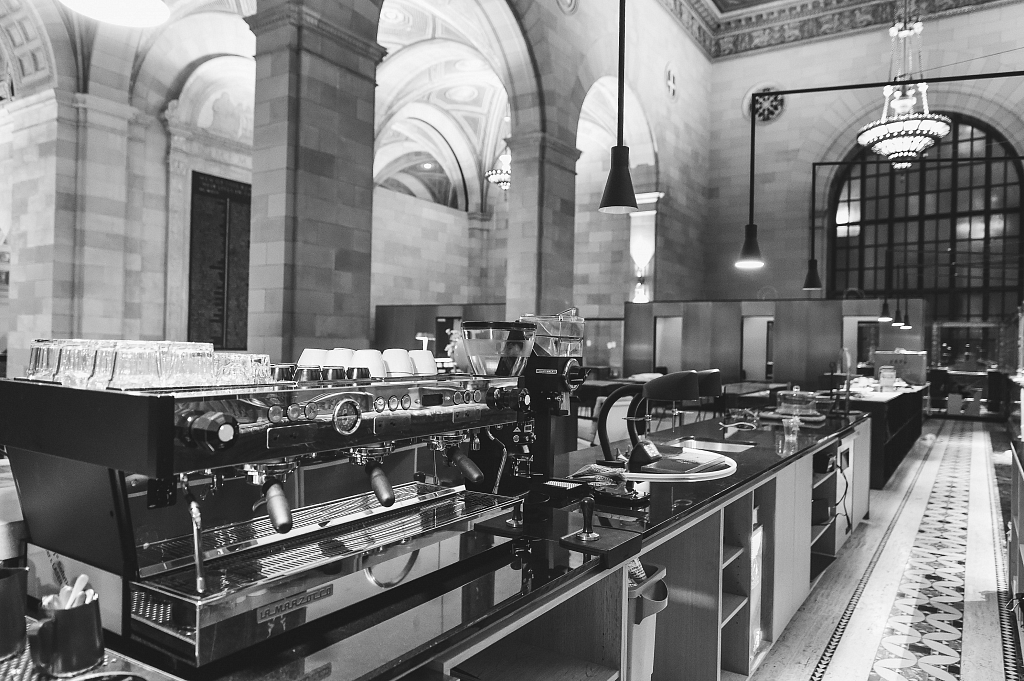 There’s a very interesting “rockstar celebrity chef scene” in Montreal that has almost become political in nature (many have strong personal views on chefs such as Chuck Hughes, Antonio Park, David Macerma and Normand Laprise). On a meta level, there’s also a strong culture of restaurants that are not only famous in their own right, but restaurants that are famous because they are beloved by other (mostly American) celebrity chefs (go watch Anthony Bourdain and David Chang’s shows to see what I mean). And unlike celebrity chef-owned restaurants in New York for example, generally speaking, the chefs in Montreal are still connected enough to their patrons and their food that it still feels like a real hospitable experience. I think the “we are French but also North American and accessible” element helps as well. If you’re looking for a special dining experience to round out your visit in this city, make sure to visit one of the restaurants below.

Places to try: If you’re looking for a Chuck Hughes experience, visit Garde Manger, or Le Bremner (Top Chef Canada’s Danny Smiles also runs the kitchen and part owner-actor Tim Rozon (who plays Mutt on Schitt’s Creek) somehow adds to the restaurant’s cred). If you’re looking for a David Macerma experience, visit Joe Beef (Sean says: If you’re on the hunt for the perfect piece of steak or adventurous game meats and oysters, this is the place to be) or Le Vin Papillon. If you’re looking for an Antonio Park experience (and Sean is seriously his biggest fan), visit Park (Sean says: this is Montréal’s best restaurant; Argentina meets Japan with amazing flavours and service) and Lavanderia (Antonio Park’s South American flair restaurant in a garden-like setting). Finally, if you want to check out arguably one of the best restaurants in the city, visit Normand Laprise’s Toqué!, or the less intense Brasserie T! (Krishna says: Laprise’s gastro-pub, right in the heart of Quartier des Spectacles serving lots of French classics like salmon tartare, but in a casual Québec style).