A step back in time at 大飲酒食 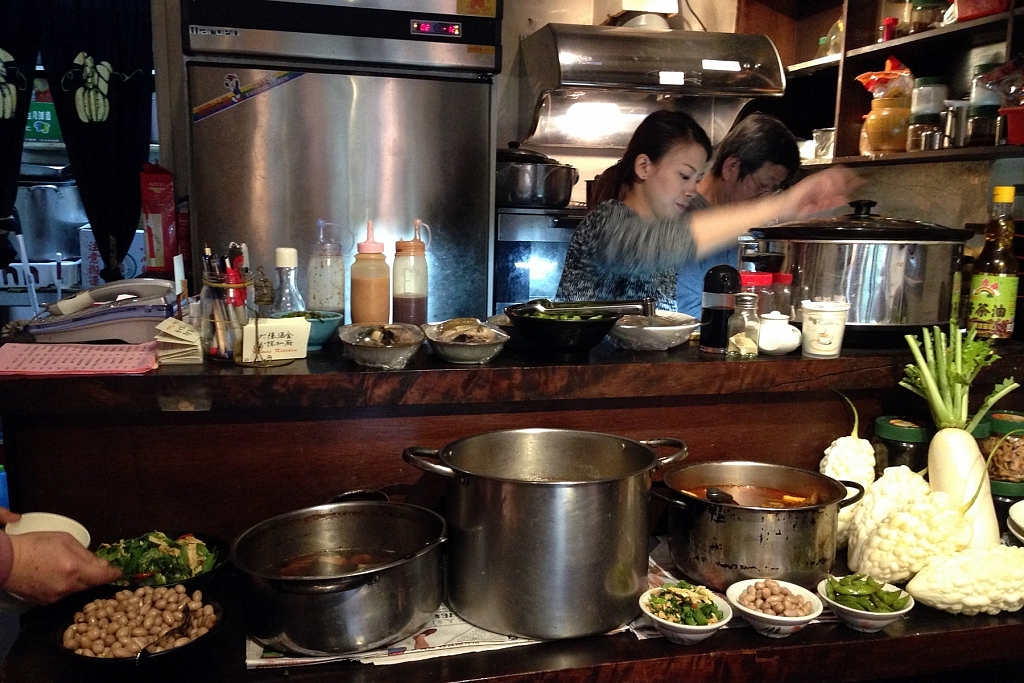 “This place serves food that is even more traditional than what my grandmother used to make,” said Professor Huang as we stepped into the restaurant. Waving hi to the owner while we took off our shoes (some with more difficulty than others, like my co-researcher and friend Jason in his Doc Martens), she turned to me and continued, “what is your favourite dish that your grandmother used to make?”

This was a hard question to answer for many reasons. Though I was born in Taiwan, I never really lived with either set of my grandparents. My paternal grandmother (my 奶奶, or nai nai), who is still with us, is what most would describe as a social butterfly. Even now in her 80’s, she still manages to arrange coffee and tea dates with all her “girlfriends” on a regular basis, taking the bus by herself to the downtown core and calling my aunts and uncles up on her cell to let them know that she was having a good time. Though I know she is a good cook, I rarely experience food from her kitchen, as she prefers to dine at sushi restaurants and bakeries for the most part whenever I am in town. However, I still have great memories of the egg fried rice with miniature salted fish that she used to make for me when I was a kid. 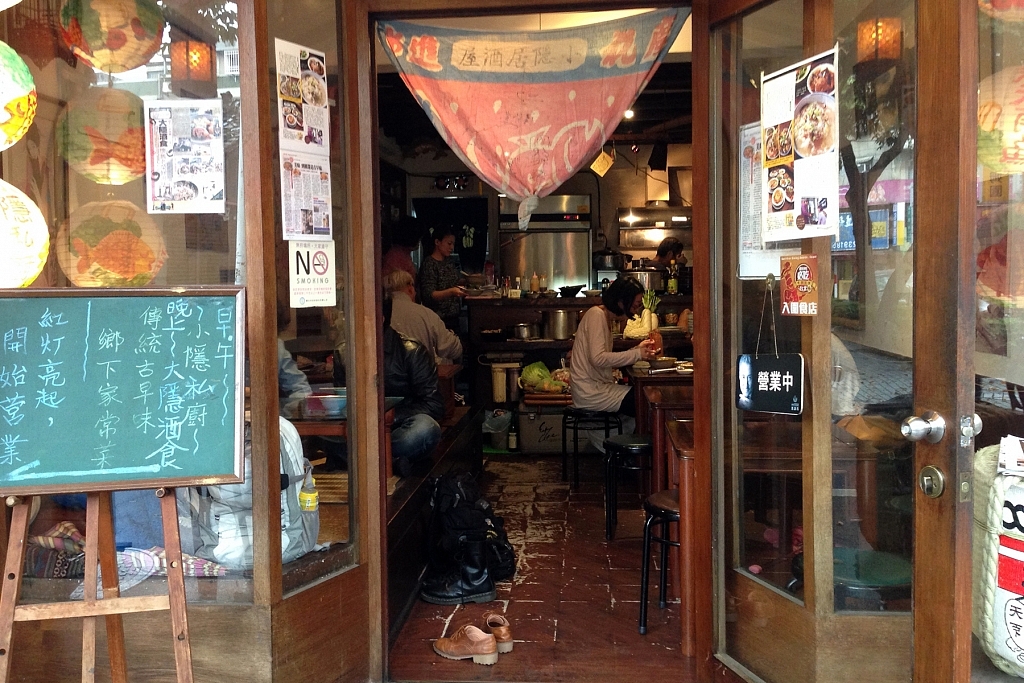 My maternal grandmother (my 阿媽,or ah ma) is no longer with us, but we had some pretty funny culinary experiences together. One summer, she and my grandfather came to live with my sister Bianca and me in Canada. In one of the most epic culture clashes I have ever experienced, each meal was a battle between what we wanted (tacos, burgers, pasta, and some fuzzy peaches candy, much to my present-day self’s chagrin) and what my grandmother thought was a “proper meal”, meaning, a meal with soup, rice, pickles, and a few main dishes. And a little sprinkle of MSG. Eventually, we learned to compromise.

Both my grandmothers grew up during the Japanese Colonial Era, and like most Taiwanese people, had/have very strong, yet mixed emotions about that time. While it is historically acknowledged that it was a period of poverty and political turmoil, many more remember those years, along with the Japanese, fondly.

Much like a good 1950’s-style diner in North America, there are few restaurants in Taiwan that can transport its diners back in time like 大飲酒食 (Da Yin Jiu Shi) can. As with milkshakes, burgers and jukeboxes in the former, this tiny restaurant and watering hole serves up sweet and tangy pickles, in sauces that you can’t find anywhere else, comforting rice dishes, slow-braised meats, and heirloom vegetables turned into soups and side dishes. When you step into this place, it is literally like walking back in time, to a kitchen that your grandmother, whoever she may be, might have had when she was a kid.

The decor is authentically reminiscent of the 1950’s in Taiwan, with many Japanese and Taiwanese celebrities, and a few Western influences too (Elvis was a bid deal everywhere). 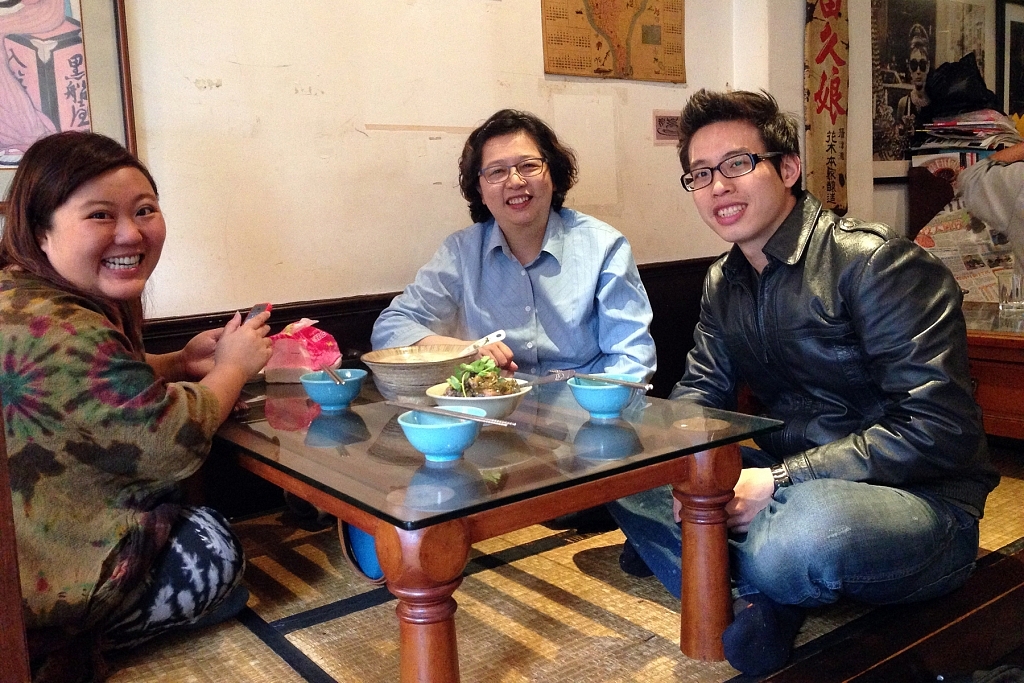 My coworkers at our small glass table

Even though I never lived during that time, the flavours I tasted were enough to transport me there. Braised cabbage with little bits of cured meat, pickled mustard greens (with the pungency of horseradish) and some boiled peanuts started off our meal in a punchy way. 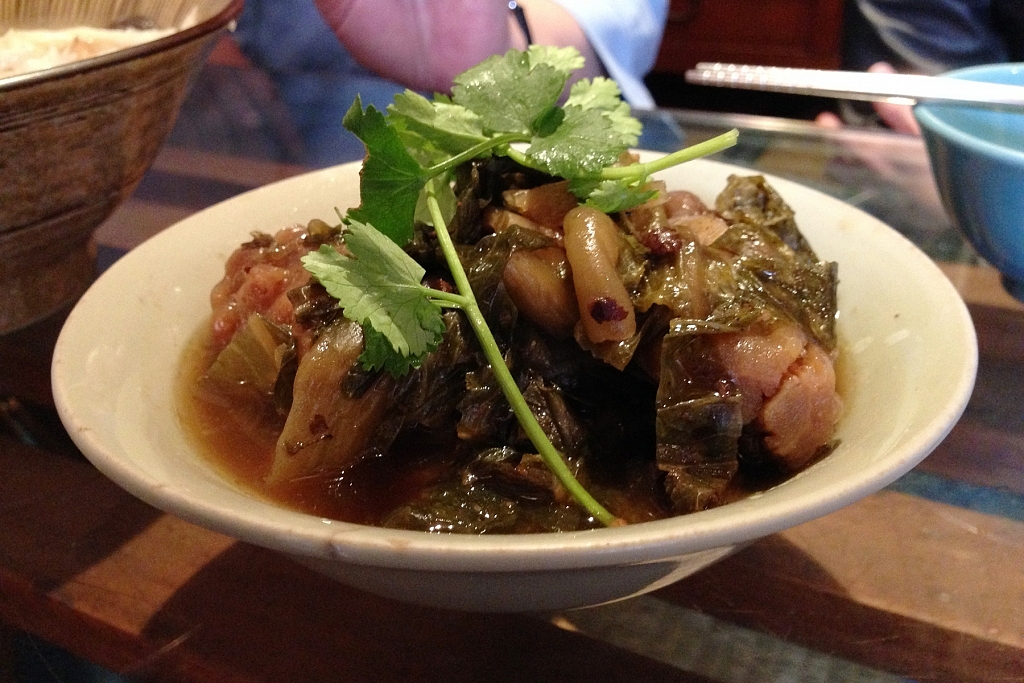 Next came our Traditional Hakka-style Congee which is comfort food at an extreme level. Unlike most congee that is made today, this congee is more of a soup than a starch, with each grain of rice separated and layered with cabbage, shitake mushrooms and bacon, all in a light and flavourful broth. While some dishes are spontaneous and change with the season, the slow braised pork dish is a restaurant staple for good reason. With the amount of soy sauce and fat in the dish, it is only logical that it be paired with “pork fat rice”. Unless one cannot eat pork, no one leaves the place without at least a bowl of this delicate, fatty goodness drizzled over perfectly steamed rice. 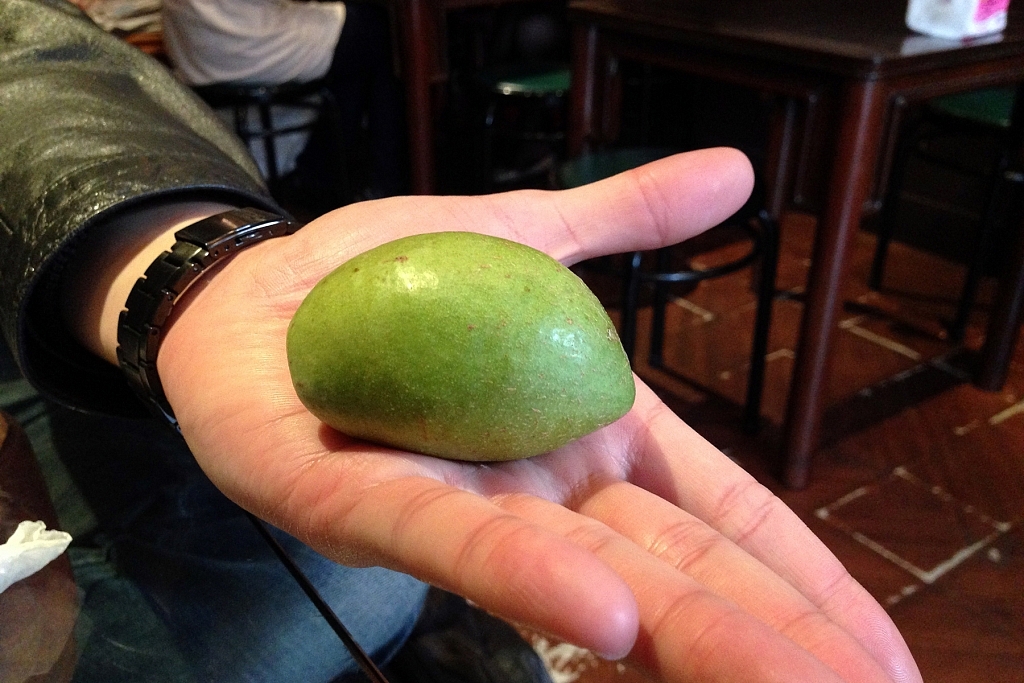 Now I don’t know how much you know about olives, but if you allow them to grow to the size you see here they get rather…sour. Shortly after he showed us the olive, he brought us out some of this simple “olive soup”, which was just chicken broth infused with giant olives. Although it was good, my mouth is still pursing and watering from looking at this photo!

This was a unique and wonderful experience. Just on a whim, we also decided to go for dessert shortly after at another lovely little spot in town. While I was waiting, I flipped through a Japanese tourist guide to Taiwan and lo and behold, was delighted when I found the dear owner and his restaurant within its pages. Though this photo was from a few years ago, he still has the same charm and warmth today, that you can see both in the way he interacts with his customers, and in his food.

Getting there: The restaurant’s name is: 大飲酒食, and the address is 北市大安區永康街65號（近潮州街）(65 Wing Hong Da-an District, Taipei (near Chaozhou Street)). Phone Number: 02-23432275