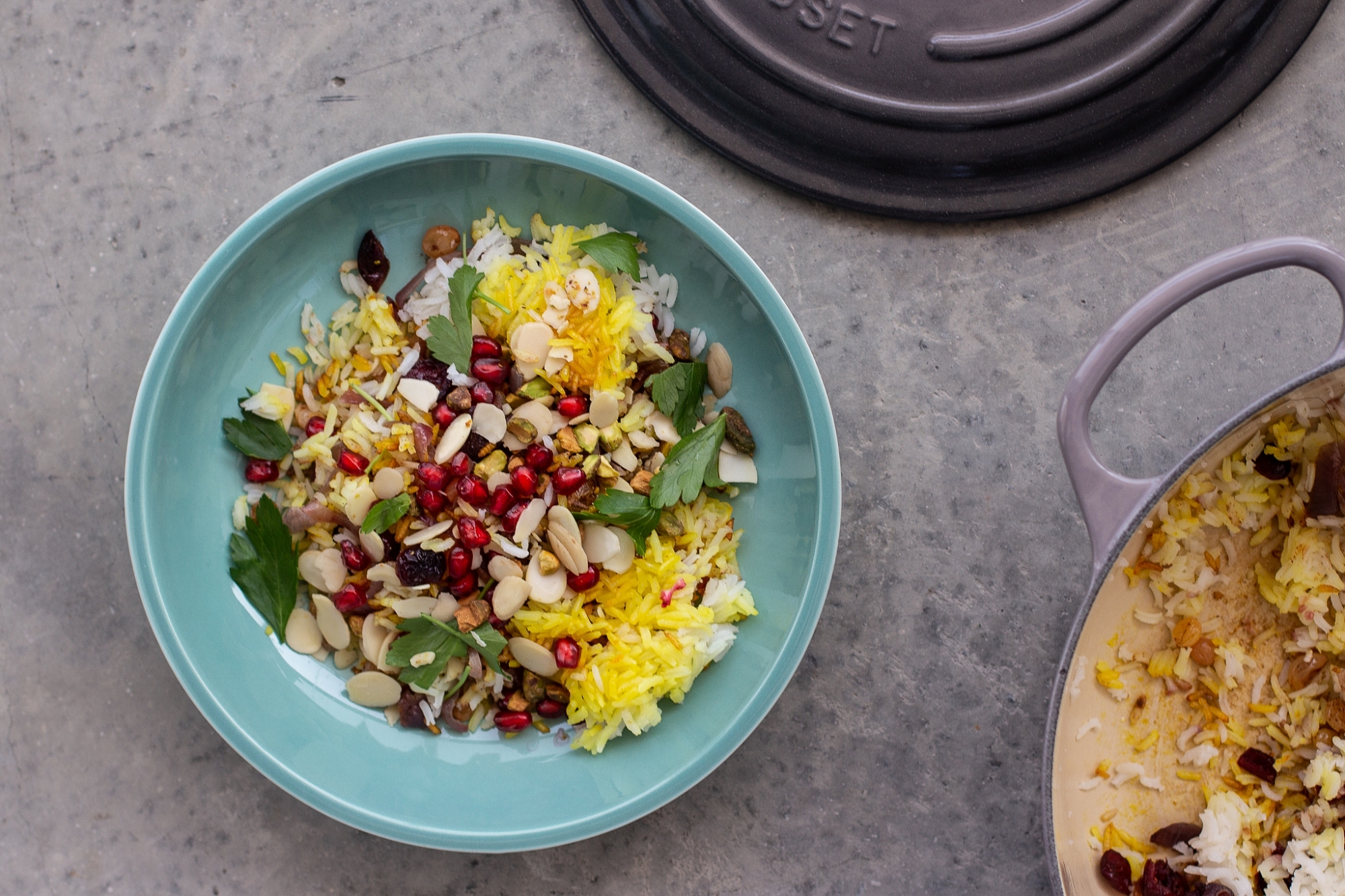 Made in the Le Creuset Round French Oven

An important note before we get into the recipe: As someone who frequently touts the importance of “culinary authenticity”, I hesitated for a moment before writing about this Persian Jewelled Saffron Rice. I’ve made food from all over the world, so why did naming this dish cause concern? This is my conclusion: The words Iranian and Persian are often used interchangeably to describe people from Iran. However, the terms Persian and Iranian do not necessarily mean the same thing. Some people draw a distinction in that Persian relates to a particular ethnicity, and being Iranian is a claim to a certain nationality. Thus, a person could be one without being the other. This makes political correctness harder to manage. In many ways, the word choice is a bit of a branding exercise. For the most part, we see the word “Iranian” used more in a news and politics context. However, the word “Persian”, and the feelings about the Ancient Kingdom it connotes, is seen more in the context of romance, poetry, literature, and vibrant food featuring saffron, pomegranate, warming spices and nuts. So, here we are.

My recipe for Jewelled Saffron Rice  (chelo) is the cumulation of my recent studies into Persian cuisine, summarized in one colourful, one-pot dish. There are numerous versions of Persian rice dishes, each competing to be the most famous or the most beautiful. However, and at its core, most Persian rice dishes involve the following: finding a long-grain rice, soaking the rice, parboiling the rice, creating a crispy bottom (which is called in part or in whole, the tahdig), followed by a final steam to create a fluffy texture and harmony of flavours. Once you master this recipe, you can experiment with different ingredients and forms of plating.

It might be tempting to approach this dish in the same way you would another more familiar dish. For me, I had to fight hard not to cook the dish like a Chinese fried rice or an Italian risotto. It is decidedly not either of those things. With the use of Saffron and a crispy bottom, you may also be tempted to make it like a Spanish paella. It’s also not that. In this dish, the process is more important than the ingredients themselves. Believe me, I experimented with this rice five times before I finally learned my lesson (especially with respect to the drizzling of the saffron water). Be gentle and patient, and you will be rewarded.

The other important thing about this recipe is that I have designed it to be made in a Le Creuset Canada Round French Oven. It’s not to say that you couldn’t use a regular pot, but there are too many recipes out there which specifically instruct you not to use a Dutch Oven to make Persian rice. I think it is more accurate to say that you will not achieve a glass-like tahdig in a French/Dutch Oven (that would be made best in a Toughened Non-Stick pot). However, the beauty and appeal of the Round French Oven is that it makes this dish so efficient to make, and the even heat distribution and steam trapping means you don’t have to MacGyver your standard pot with a wet paper towel, or worry too much about burning. There is a reason why many people would choose this vessel as their “one thing” to take with them to a deserted island. Honestly, I would too.

By way of note, I have a 5.3 L Round French Oven in the colour Oyster, but a smaller 3.3 L or 4.2 L would also work very well for these quantities of ingredients. If you have one that’s larger than 5.3 L, I would double the quantity of each ingredient. And as for the plate? It’s a coupe pasta bowl in Sage from the new Le Creuset Canada Minimalist Dinnerware collection! What a beaut, right?

This dish is fun, beautiful, and looks very impressive on the table. It would work well as a side dish paired with roast lamb, stews, roast chicken, or mild curries. However, you could always enjoy it on its own for a light yet satisfying weeknight dinner.

Please note: This recipe was made in partnership with Le Creuset Canada. All affiliate links on this page go towards supporting the blog and do not otherwise affect your use of the site, or the Le Creuset Canada site, whatsoever.