Memories of Banff (Part I)

And how to run away from bears 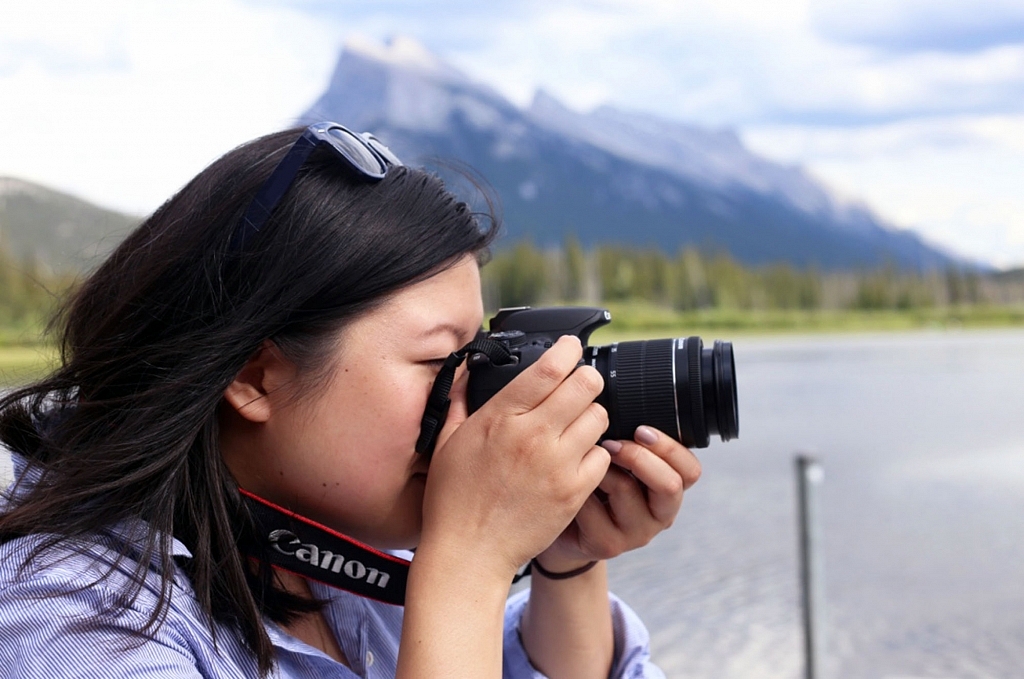 Known for its beautiful scenery and exciting wildlife, Banff is an international tourist destination that many will visualize when describing Canada’s majestic allure. I must have been about seven or eight years old the first time I visited Banff but mostly remember being asleep in the back of a full tour bus. Dragged from one gift shop to the next between posing awkwardly for bleary-eyed photo ops, I was your typical passive kid traveler. However, I do have two very strong isolated memories of that trip. Seeing a black bear out of our hotel room window and trudging through snow to drink pure glacier water were two pretty amazing experiences that have been etched into my childhood. It must bring great relief to my parents that their early efforts to turn me into a seasoned traveler were not completely wasted!

Fast-forward twenty years and I’ve got Banff on my mind again. Only this time, I was boarding a plane to Calgary from Toronto and with a much stronger sense of purpose. After carefully committing my itinerary to memory, I sat back and sipped on my club soda (my neutral in-flight beverage of choice) and thought about the journey ahead. A few rows behind me were four familiar faces: Louisa Clements of Living Lou, Davida Kugelmass of The Healthy Maven, Yuli Scheidt of Fat Girl Food Squad, and Julie of Sober Julie. Though we had a bit of an early rise (Around 5:45 AM for most of us), we were excited to meet up with Ethan Adeland of Food Bloggers Canada (joining us from Vancouver) to start our culinary press trip with Banff Lake Louise Tourism. 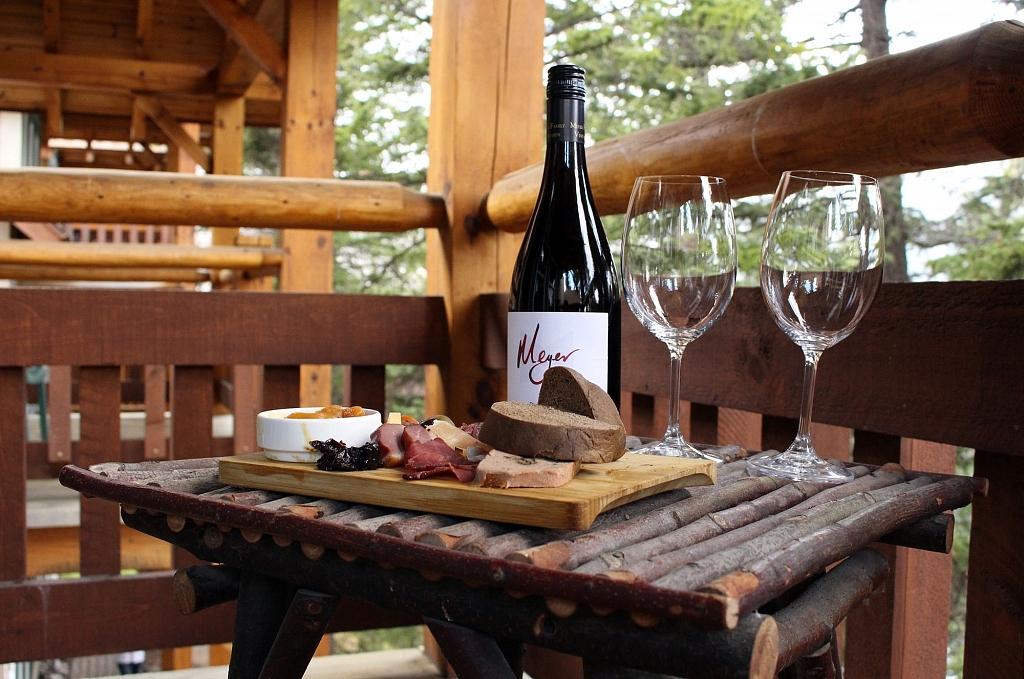 A three-and-a-half-hour flight and one-and-a-half-hour shuttle ride on the Banff Airporter later, we arrived at Buffalo Mountain Lodge. What a beautiful place. The lodge is built on sturdy wooden beams with stone supports and surrounded by nothing but trees, mountains and lightly paved roads. The friendly green polo-clad staff look more like camp counselors than hotel employees and the rooms were just as inviting. My serene cloak of peaceful silence while doing the usual dramatic “hotel bed plop” was only briefly interrupted by a delivery of a bottle of Meyer Estates 2013 Pinot Noir, two wine glasses and soon after, a plate of charcuterie. I could totally get used to this. 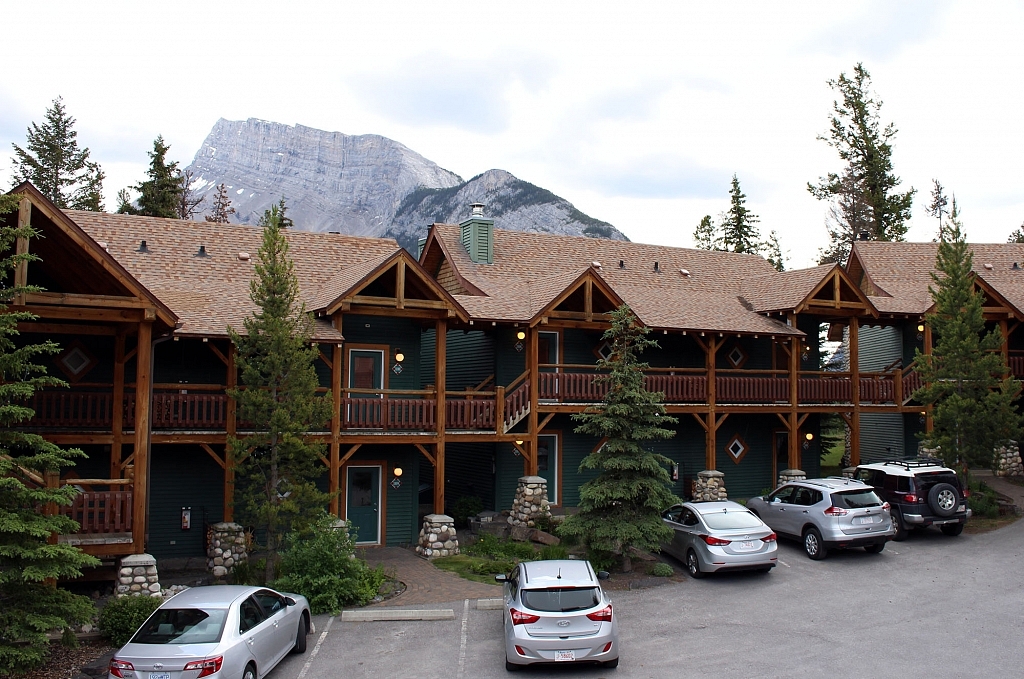 After settling in, we headed to the kitchen to meet up with Executive Chef Kelly Strut, who gave us a tour and a cooking class. With typical dishes such as venison meatballs (I did the ballin’ of said meatballs!) and beef short ribs, he was proud to speak about the meat sourced from Canadian Rocky Mountain Resorts’ (CRMR) own game farm. Further confirmation that we had arrived in the mountains was not needed. We took turns dicing shallots, chopping mushrooms and taking photos of each other doing the same (it’s a food blogger trip, after all). 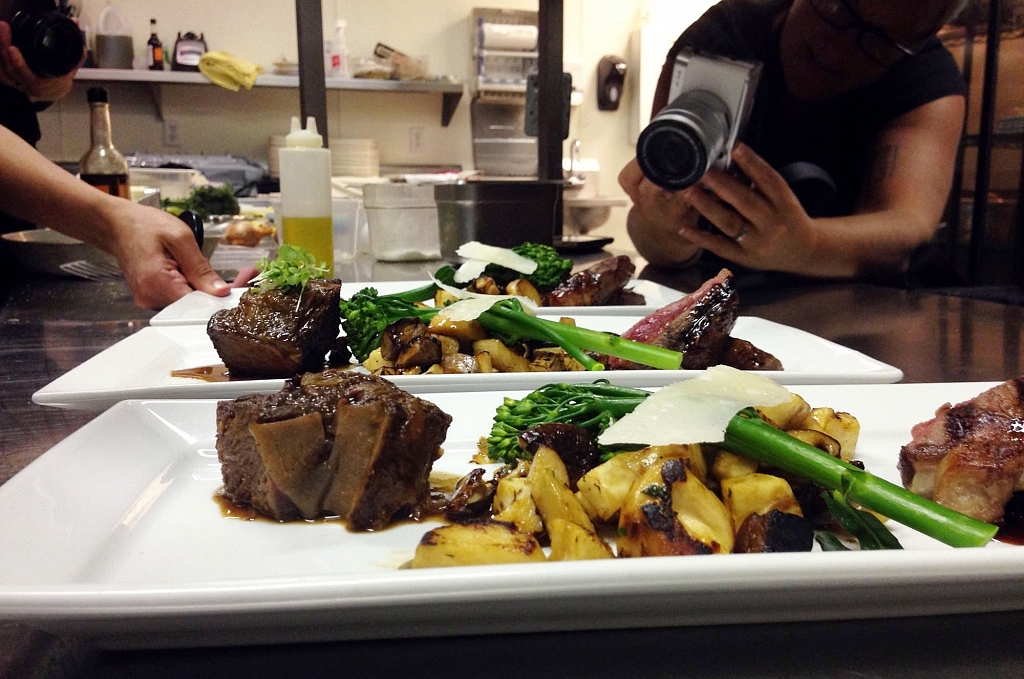 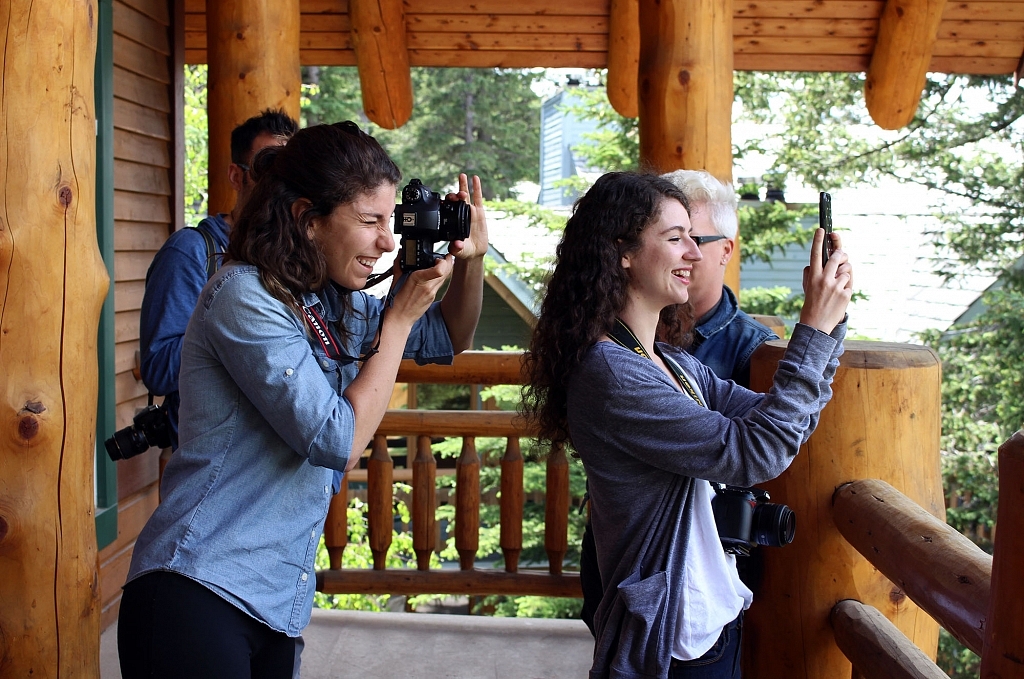 To walk off our afternoon meat indulgences, Ethan thought it a good idea to take a bit of a tour off the Hoodoo Trial. And for the most part, it was beautiful. The sheer size of the Rockies is an incredible thing to behold. We pushed through the bramble and skipped a few rocks into the river until we suddenly approached a clearing where we saw a herd of elk grazing quietly by the water’s edge. Gingerly stepping over branches as to not scare the animals off, we stood with silly grins on our faces thinking about what a fantastic decision it was to have taken this path and been able seen such beautiful wildlife in their natural habitat. That is….until we saw the bear.

It was Yuli who saw it first, and I definitely thought she was kidding. Obviously, she wasn’t. Amassing our collective bear defense knowledge, we started going into calm-yet-panicked mode by shouting loudly and waving our hands in the air while walking around briskly (we must’ve looked ridiculous). However, we soon realized that the baby bear (with a mama not too far away) was blocking our original path back. There was only one alternate path to go, and it was straight up. Seriously, that climb was ridiculous. Though a few bruises and scratches were created along the way, we all managed to scramble up the hill in about 30 minutes or so and high fived each other in relief. 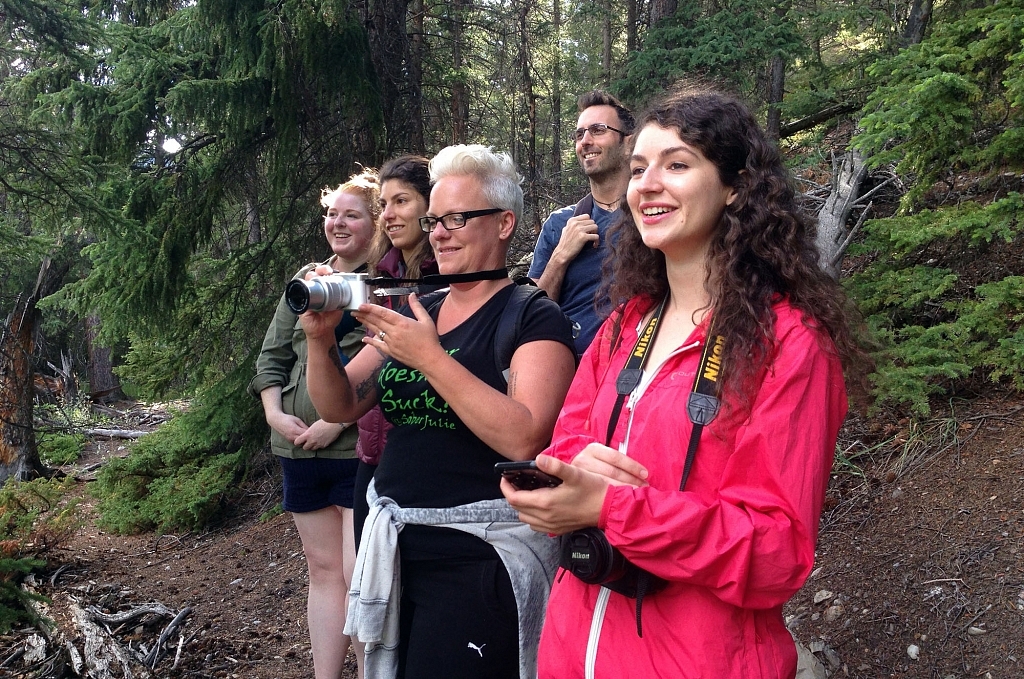 You can only imagine the stories we had for dinner when we met up with Kym, the Executive Director of Banff Lake Louise Tourism, James, the Assistant Operations Manager of Buffalo Mountain Lodge, and Steph, a media manager of CRMR resorts. I don’t usually recommend eating at hotel restaurants, but you’d be silly not to dine here. Other than the food, our server (and sommelier) Ryan impressed me so much with his exceptional knowledge and dedication to our meal. We started off with the Sandhill Pinot Gris which was light and fragrant, and paired well with our charcuterie and cheese course featuring (among other things) elk sausage, prosciutto, and smoked duck breast, Oka, brie, and gouda, and a surprisingly delicious “mustard melon”. We were just about full before the appetizers arrived. 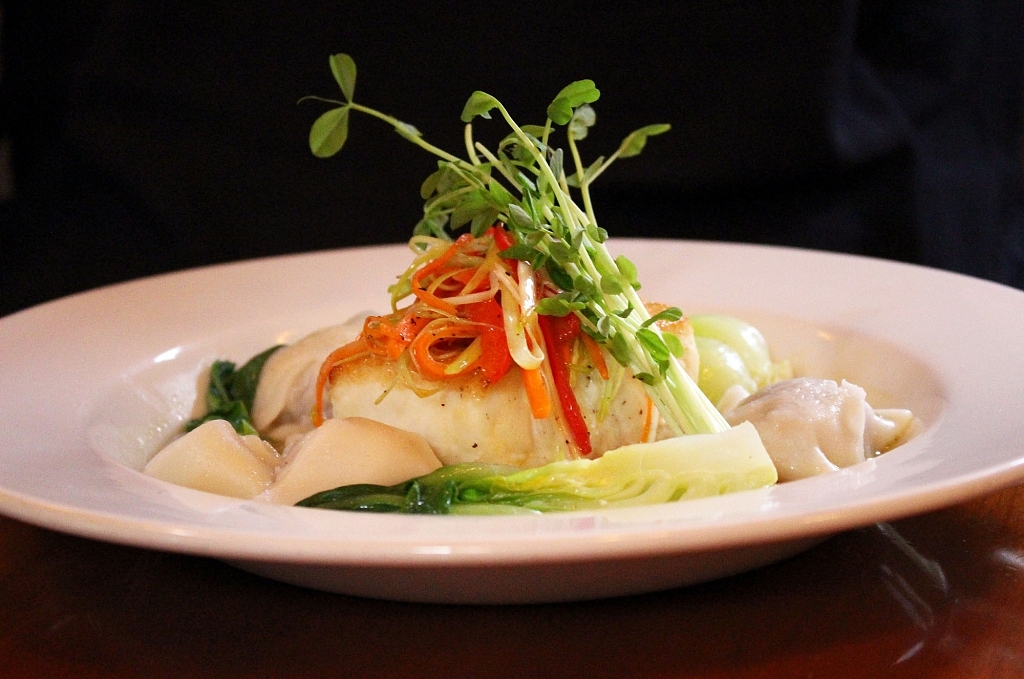 Based on his revolving seasonal menu, Chef Kelly had prepared a special selection of items just for us. To start, we had the choice between a leg of duck confit and a tuna tartare. Both good. The mains however, were the real star of the show. Though the BC Halibut was tempting (a roasted loin served with pork chili dumplings in a miso chive broth, bok choy and julienned vegetables), I was thoroughly happy with my decision to order the elk tenderloin. The richness of this gamey meat is simply not something most of us have the luxury of eating on a regular basis.

The jammy Merlot-Syrah from Fork in the Road Vineyard heightened the flavours of the meat even more for me, especially between drips of the brandy morel mushroom veal jus. The desserts were equally fantastic, featuring a flourless chocolate quinoa cake (if it’s on the menu when you go, I would highly recommend this, especially with the brandy ice cream) and an apple and almond streusel topped with a strawberry compote and house-made maple gelato. I am not quite sure whether it was the excellent company, the sweet Pedro Ximénez from Dandelion Vineyards or both, but we sat around and talked about Banff and food late into the night until we couldn’t keep our eyes open any longer.

Major takeaway of the day? If going off the beaten path, bring bear spray.

PS. Check out the next post about the rest of my trip in Memories of Banff (Part II). 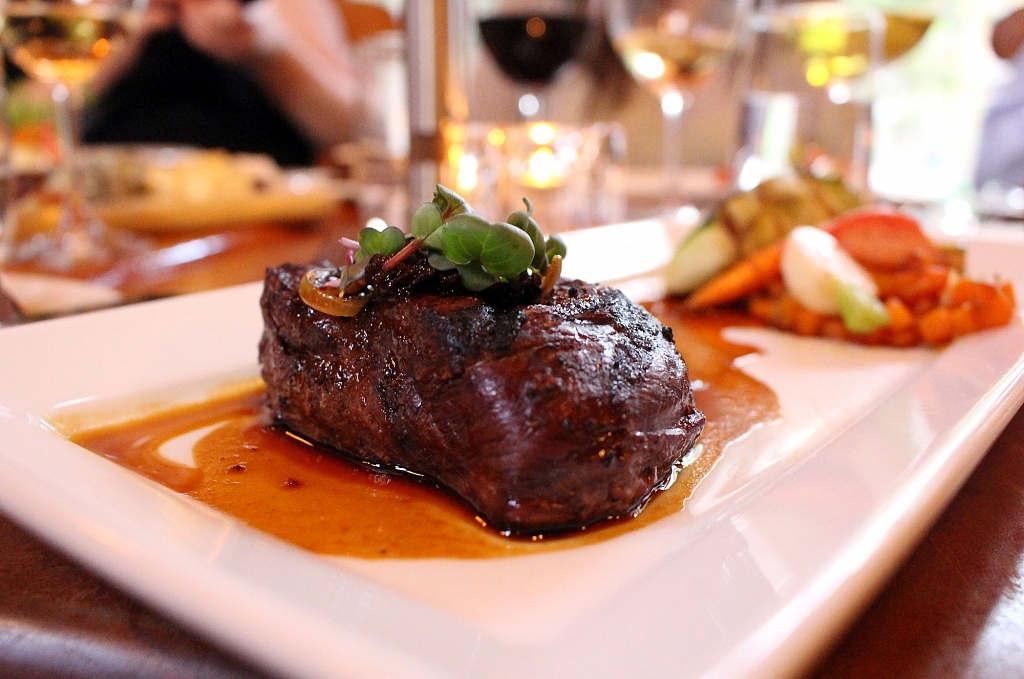 Disclaimer: I was a guest of Banff Lake Louise Tourism and my transportation, accommodation, excursions and meals were covered for this entire trip. I am not being further compensated for writing about my experiences and all opinions are my own, including those about the wine which I only mentioned because I happened to really like them. All photos in this post are taken by me unless it’s one of me, in which case, is taken by Lou or Davida.
Share on Facebook Share
Share on TwitterTweet
Share on Pinterest Share
Share on LinkedIn Share
Send email Mail
Print Print
adventureAlbertaBanffCanadianfood bloggerstravel
NewerKorean Pork Belly Lettuce Wraps
OlderCinnamon French Toast