From kayak to townie bike to climbing a mountain 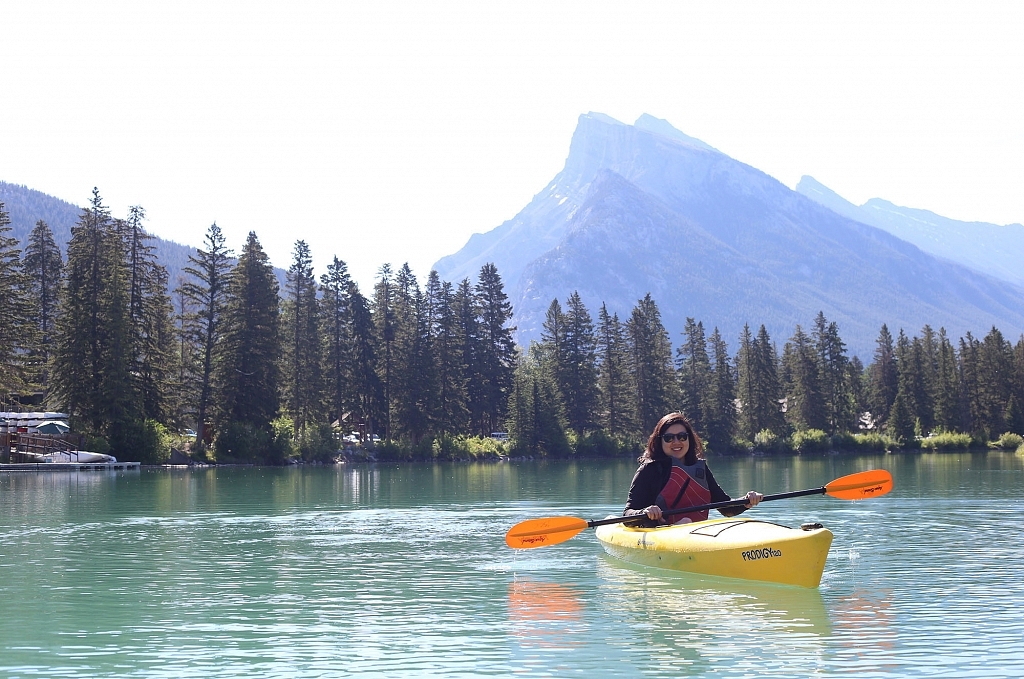 I’m back with Part II of my Banff adventures (Head over to Memories of Banff (Part 1) first for a bit of context). I can’t begin to tell to you how difficult it was to select photos for this post out of the thousands I took (and others took of me!) on this trip. With the mountains and lakes framing almost every shot, it was hard to take a bad one, and we had more than a few “is this for real?” moments. I’m warning you now: it may be hard for you to resist booking a trip to Banff immediately after reading this. But now that you’ve been warned…where we we?

After a wonderful sleep and breakfast at Buffalo Mountain Lodge (too short in both cases, but there was so much on the agenda today!), Davida, Lou and I took a walk along the highway into town to hit up the Banff Canoe Club. Our incessant chatter about blogs and muffin recipes soon subsided as we took in the beauty of Lake Minnewanka. The blueish-green waters that are created from the melting of the glaciers is really quite stunning and seldom seen elsewhere.

With three people, it made sense to rent kayaks. Not only did they bring us closer to the water, but they also allowed us to take photos of each other (yes, we brought the expensive DSLRs with us! #Commitment). Our original plan to paddle together in the same direction didn’t last for long. It was obvious that the quiet motions of the lake would direct us on our own course. I could hardly believe it when I looked at my watch and realized an hour had already passed. 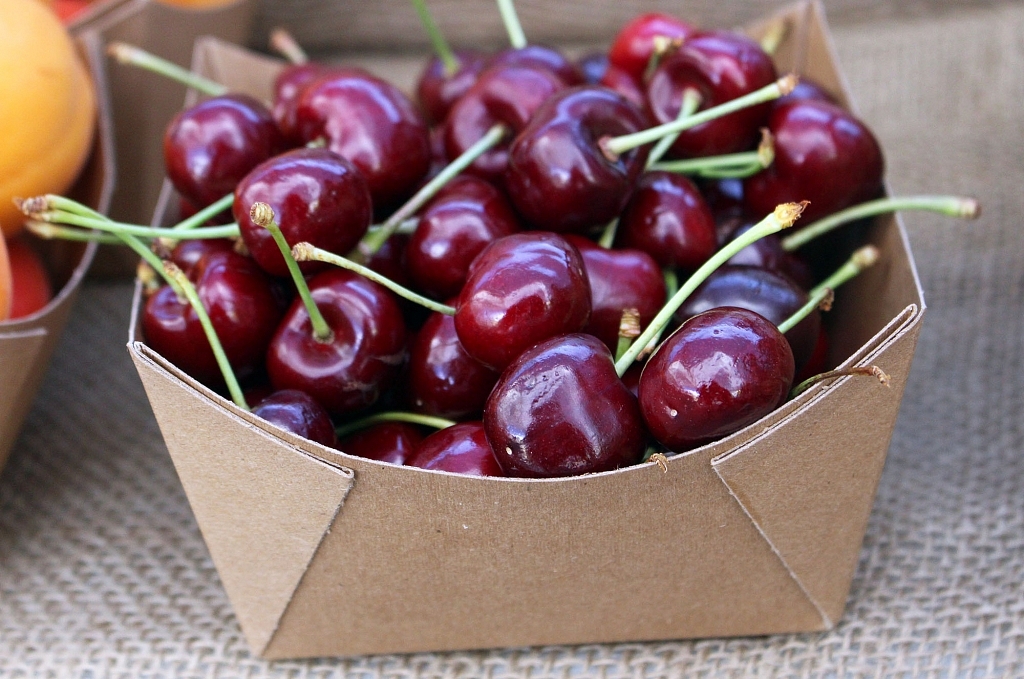 After returning our paddles, we walked back into town and popped over to the Banff Farmer’s Market. The rest of the gang (Ethan, Julie and Yuli) had opted for a morning of downtown exploration so they had a chance to check out the market as well. There were beautiful fruits and vegetables on offer, booths featuring a few local artisans and not surprisingly, a lot of game meat. It’s not incredibly big by farmer’s market standards, but worth a visit if you’re in town over the weekend. However, the three of us kayakers couldn’t stay long as we needed to quickly run back to the hotel. A three-minute shower and an outfit change later, I was ready to take on the rest of the day. 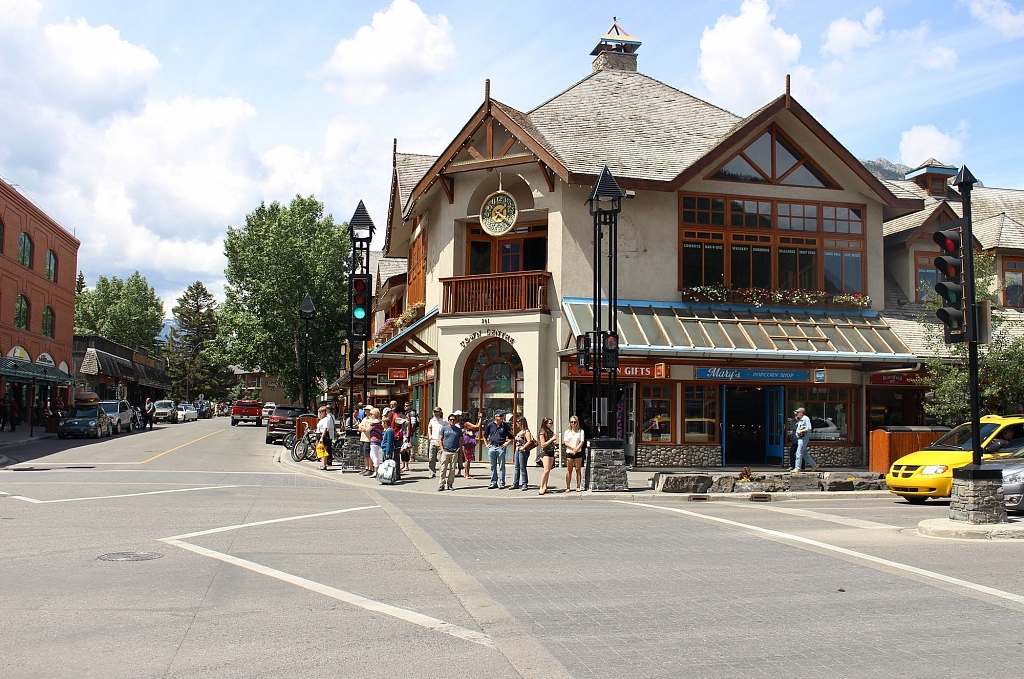 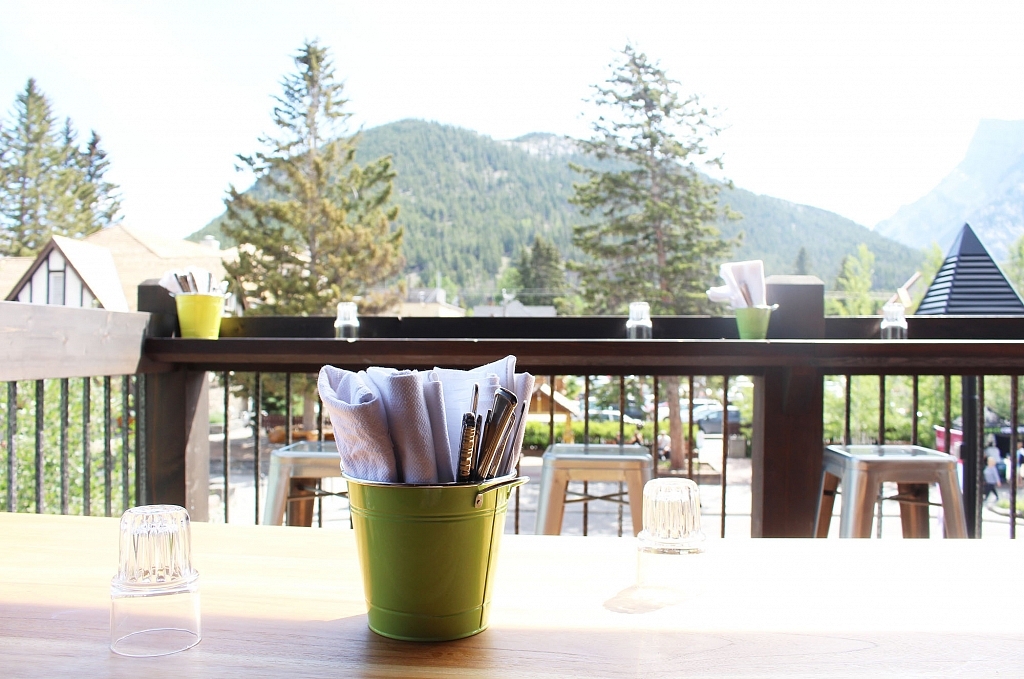 The timing of our press trip coincided perfectly with the opening of one of Banff’s most anticipated establishments, Park Distillery Restaurant + Bar. Barely a few weeks into business, we were lucky to be around to experience the making of the first batch of whisky during our tour of the larger-than-life space. The “campfire inspired” food (think Tinfoil Trout, “Hiker’s Bowl” Salad, and S’mores in a mason jar) was a lot of fun. The cornbread with maple rum butter is definitely worth ordering for the table. However, the best part of the restaurant is the décor. The overall design is clean and modern, but with their intentionally-chipped enamelware, vintage lanterns and checkered blankets, they’ve managed to create the restaurant equivalent of glamping. 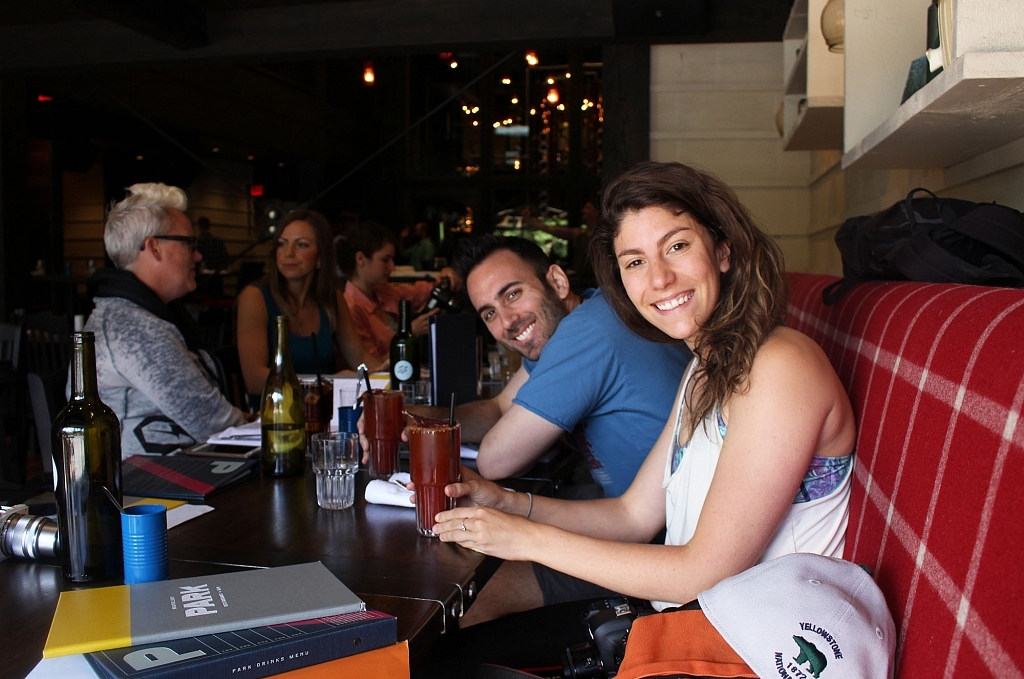 Most of Downtown Banff is filled with touristy shops and outdoor equipment stores. However, Patagonia and North Face seem way cooler (and more relevant) here than they do in Downtown Toronto, and the other retail stores are adorable to boot. We also managed to squeeze in a few minutes just hanging out on the lawn in front of Cascade Gardens before it was time to meet up with our friend Jonny from Banff Lake Louise Tourism. Dressed in his (now signature!) bow tie, short-sleeved button up and a pair of light khaki shorts, he was easy to spot at Banff Adventures. Or…maybe because he was standing with a half dozen Townie bikes set aside for us. Whichever. 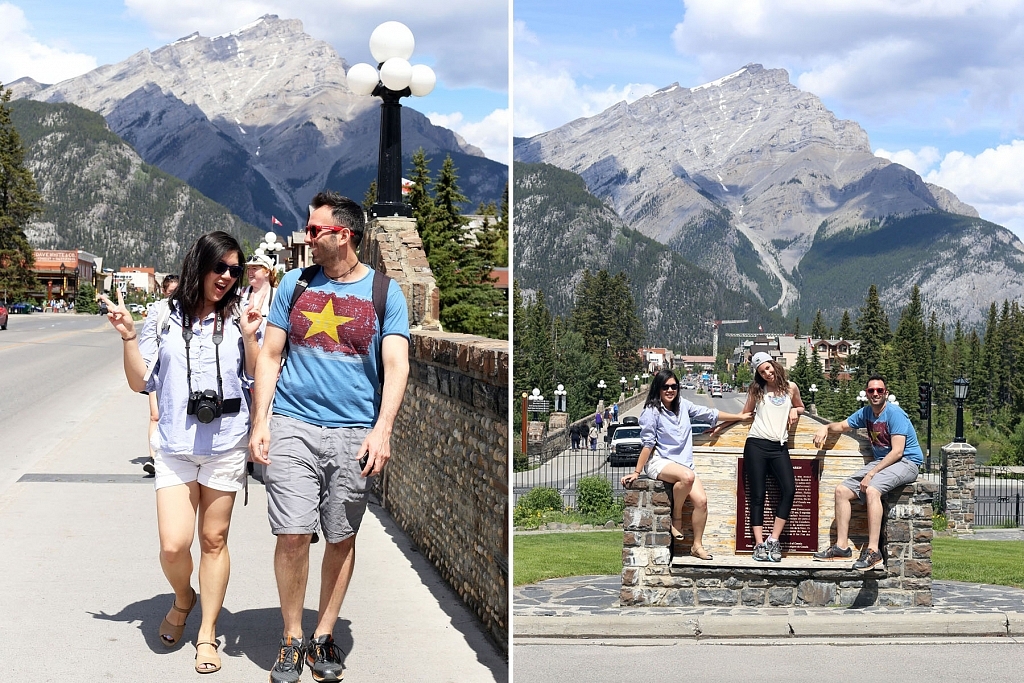 The bike rentals here are a great deal at $12/hour or $35 for the whole day and come with a helmet (though I typically would not suggest not wearing a helmet, they are not legally required, and in reality, adults really don’t need one on these paths), a bike lock, and a trail map. But you know what’s better than a trail map? Jonny. 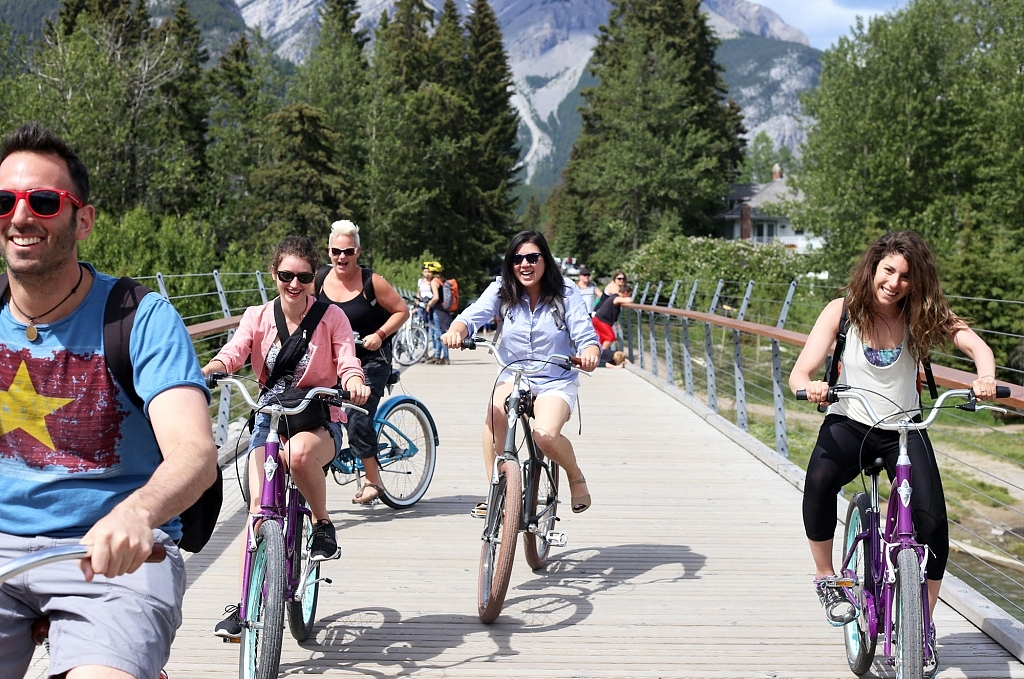 Before going off into the trails, we first grabbed a bite to eat (yes, we had a second lunch) at Block Kitchen + Bar. This place is ideal for an “in between” meal because of its central location and “Mediterrasian” style tapas menu. As a tourist, biking in the downtown core is not the most ideal, as the traffic lights in Banff are unnecessarily complicated and will cause great frustration. It’s a much more enjoyable ride near the water. 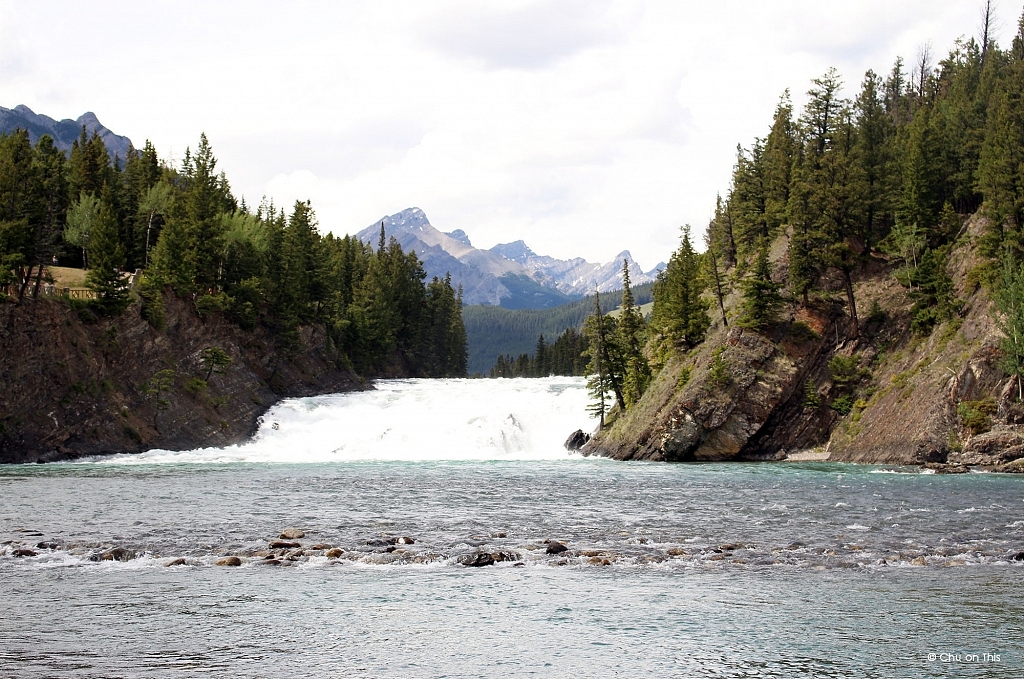 We sped along the dirt paths near Lake Minnewanka and soon approached the mouth of Bow River (pictured). Before I even saw the waterfall, I saw the throngs of tour buses lined up nose to bumper waiting for their respective riders to finish taking their selfies. Hey, I don’t blame them. It’s a pretty fantastic view.

But there were other views waiting for us and we arrived shortly after at the Vermillion Lakes. There are three in total and we managed to fit two in on our tour. Though most of the photos I assembled for this blog post consist of mountains, trees and lakes, the combination of these three forces of nature at each location come together in a very different way. I edited all the photos in the post very minimally and didn’t apply any filters, so what you’re seeing of the rich earthy tones at the Bow Falls and the cool blues of the Vermillion Lakes is very much true-to-life. 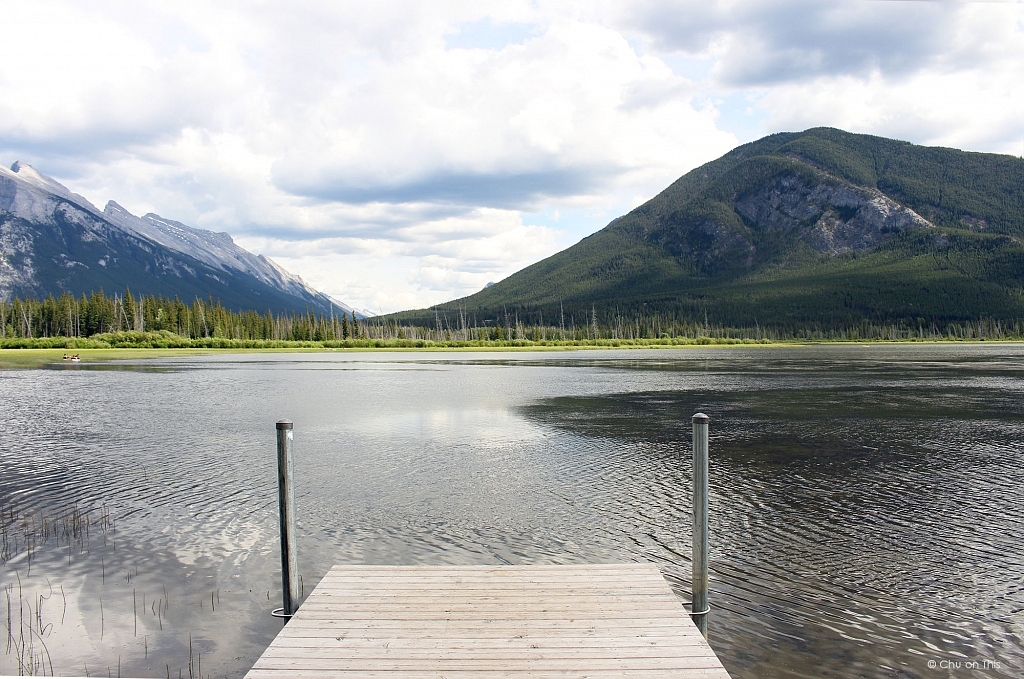 A highway (just a bit nerve wracking) and a giant hill later, we had arrived at the Juniper Hotel + Bistro. The restaurant on the inside is nice, but people come for the patio. I thought it was cute that our server took the effort to ask us politely whether the particular table she had in mind would be okay, as if they hadn’t already prepared a perfectly-set arrangement for seven under a big shady umbrella, with comfortable cushions and overlooking the most spectacular dinner view I’ve ever seen. Yes, that one will do just fine, thanks. 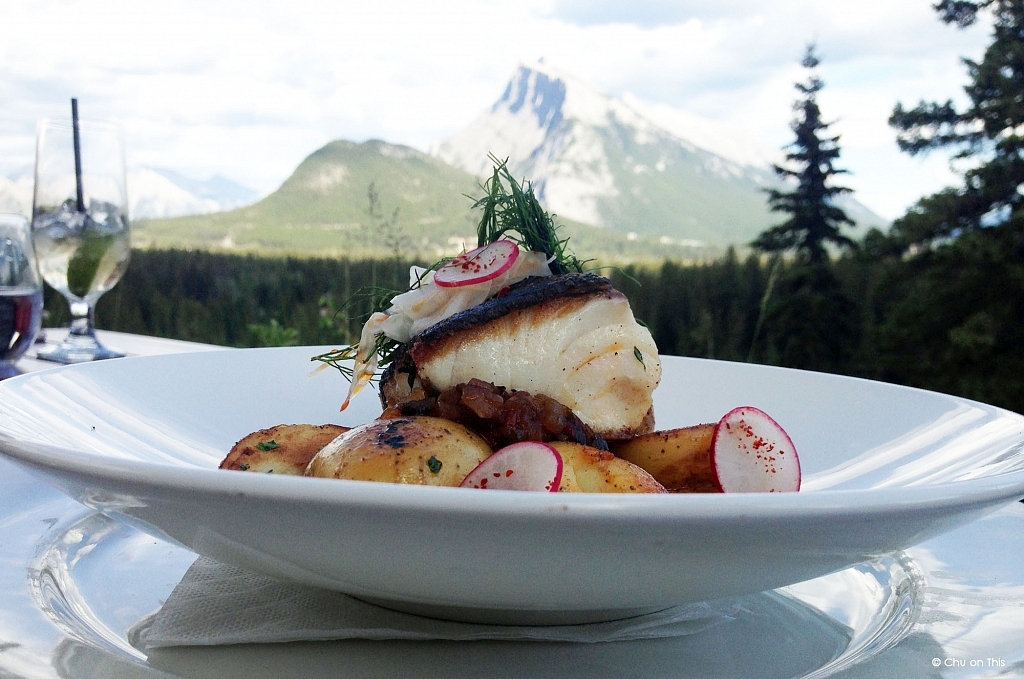 Deciding what to order was the hardest part. Julie got the mushroom gnocchi, Ethan ordered the burger, and Davida the aforementioned sablefish. Lou opted for the mushroom duxelle and prosciutto-wrapped Pork Wellington while Yuli chose the lamb saddle with Israeli couscous. 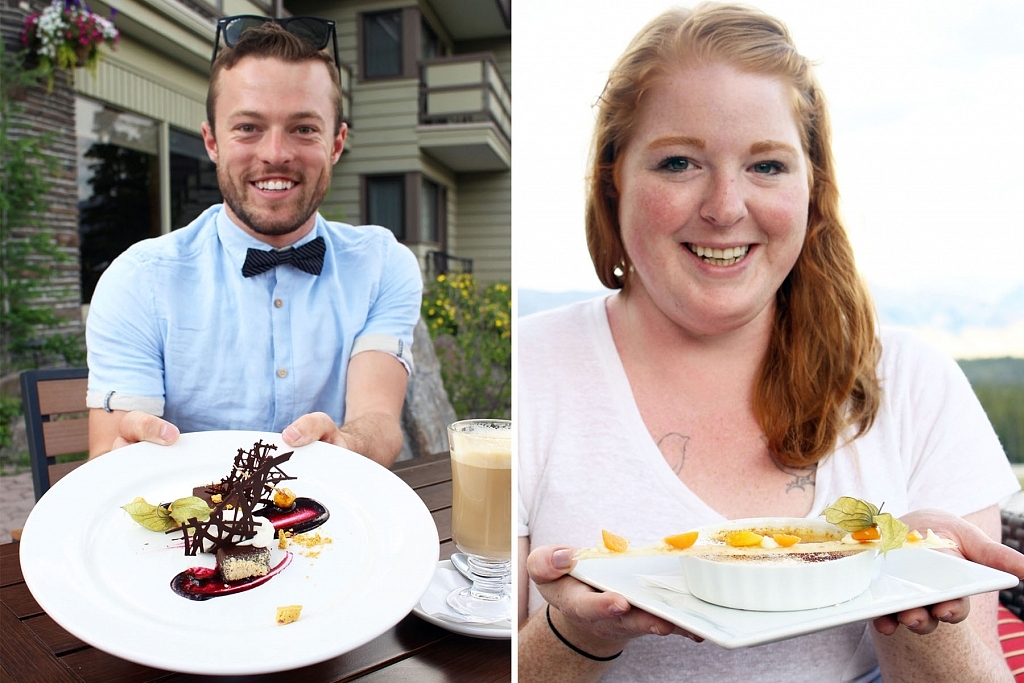 Remember when I said I was a fan of Jonny? Well, he was even nice enough to indulge my indecisiveness and agreed to go “halvsies” with me on the the Pork Wellington and the AAA Ribeye. The latter is served on top of a crunchy lobster cake with some seared broccolini, tomatoes, and a beautiful garlic and green peppercorn hollandaise. Not recommended by any cardiologist to be sure, but each bite was rich and creamy, and worth each calorie. 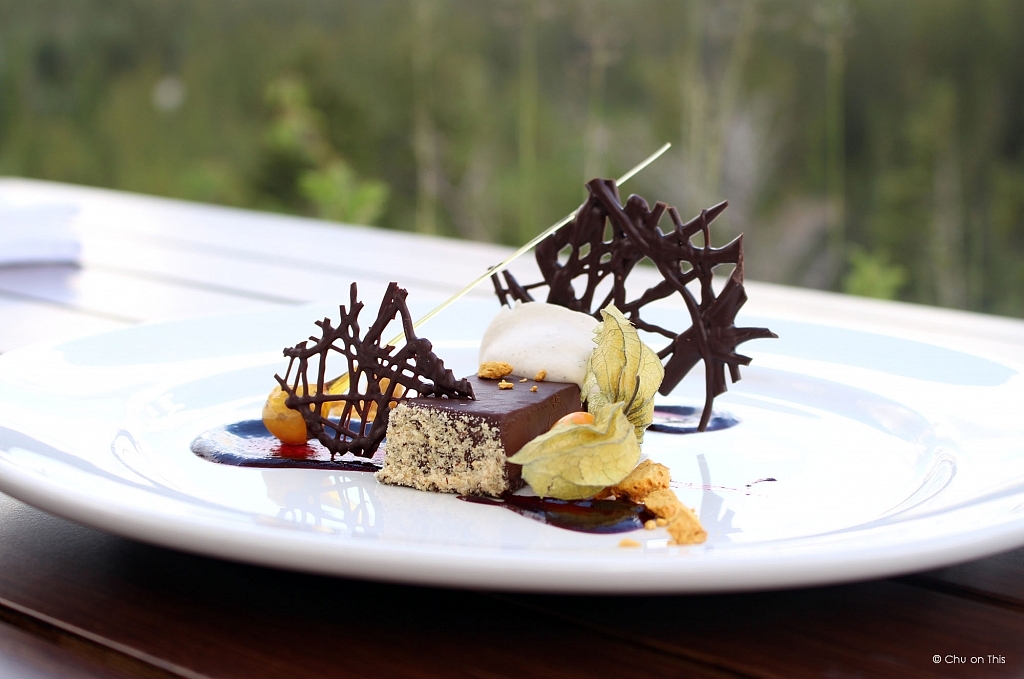 The desserts were also pretty epic. Pay attention to the crème brûlée offering of the day (it was orange and coconut today with gooseberries for garnish) as it changes daily. The crystallized candied mint that Ethan handed to me off of his lemon bars was a very special bite as well.

The Juniper Bistro is much more than just a restaurant. With its beautiful food and unparalleled view, it’s an an experience for all the senses.

We biked back to town (as a side note, it is much harder to bike on a stomach full of ribeye…) and ended our night with a tour and a flight of beers (I’ll be honest, I couldn’t finish it!) at Banff Ave. Brewing Co before returning to the lodge to relax after a very stimulating day. 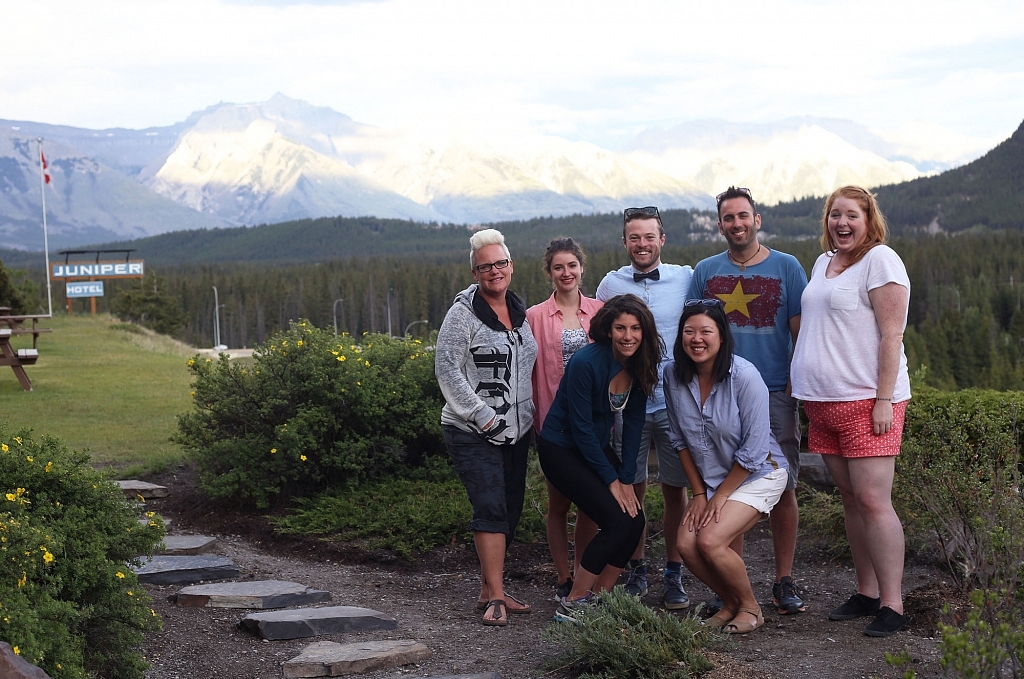 If you’ve had the chance to read any of my fellow bloggers’ posts from the trip (or followed along with the hashtag #MyBanffFBC), you will note that the full trip was for four days and three nights. Unfortunately, I had to leave early to get Called to the Bar and I was only able to enjoy the third morning in Banff before I had to jet. However, I did manage to climb a mountain. 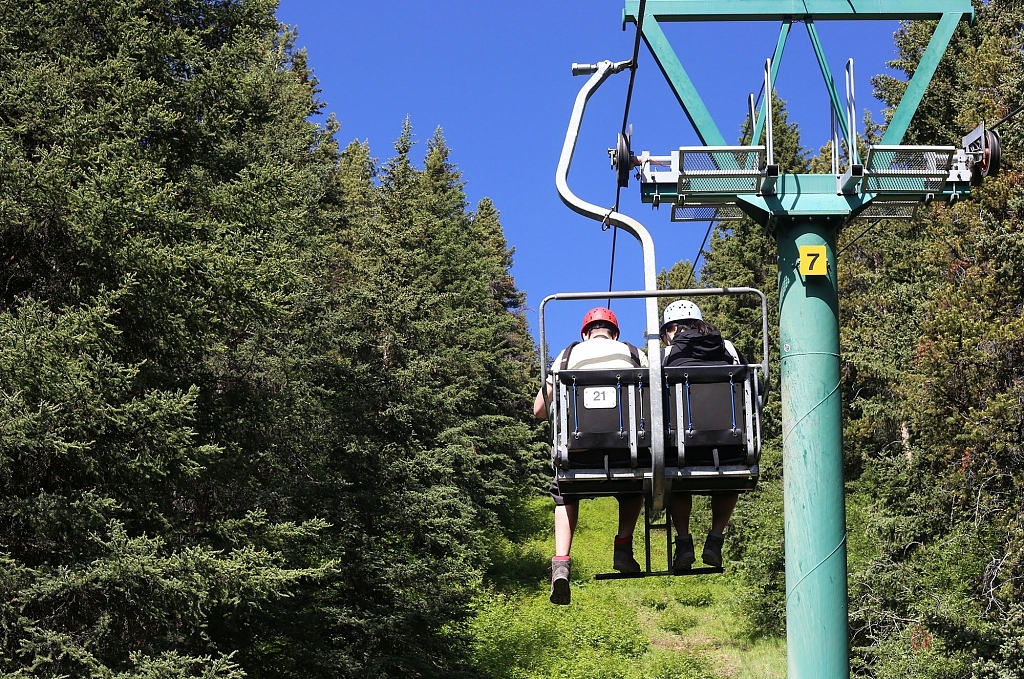 The idea of mountain climbing is quite daunting for many people, and I won’t pretend that I wasn’t intimated by what we were about to do. I also won’t lie and tell you that it was easy. Other than going up (and later down!) the chairlift, you have to have enough core strength to be able to climb and repel in areas that may not have natural hand or footholds, and enough balance to walk on edges when you are not even attached by so much as a carabiner. All that considered, it was still pretty safe. And if you’re on the fence about your own ability, rest assured that your guide will be able to tell within your first ten steps whether or not you have the strength (and willpower) to complete the rest of the course. 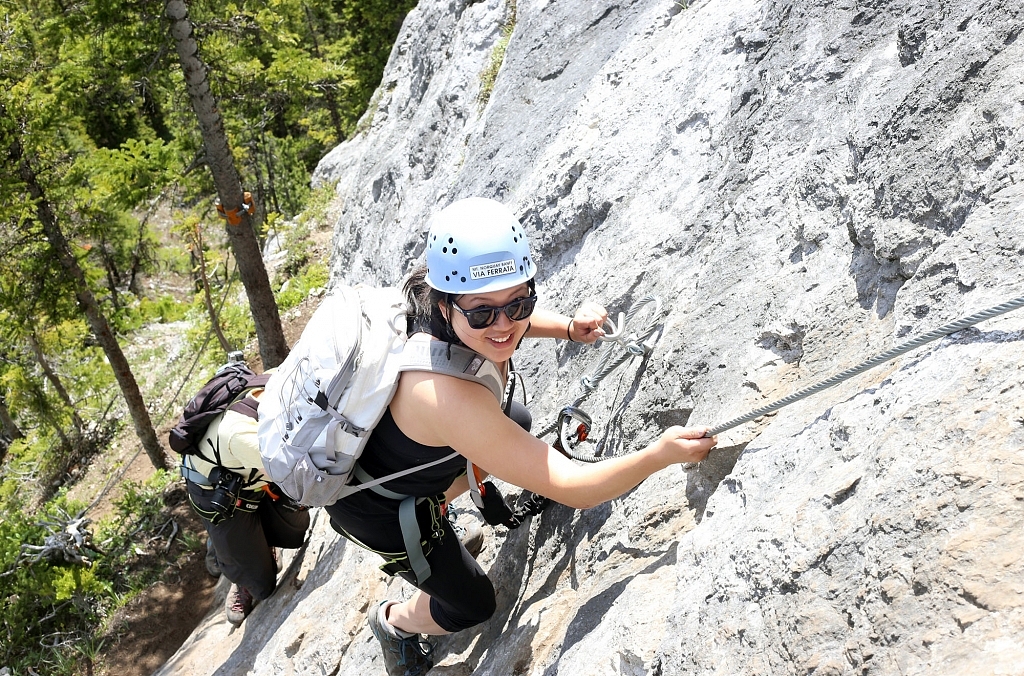 The Via Ferrata (“Iron Path” or “Iron Way” in Italian) on Mount Norquay is a path of steel footholds, loops and cables that act as a sort of safety net for climbers. We opted for the 2.5 hour climb and everything we needed (you should really use their hiking boots unless you happen to own amazing ones) was provided to us, including a great guide by the name of Chuckie. It was exhilarating and I think I can speak for Ethan, Davida and Lou when I say that it was the climb of our lives (so far!). 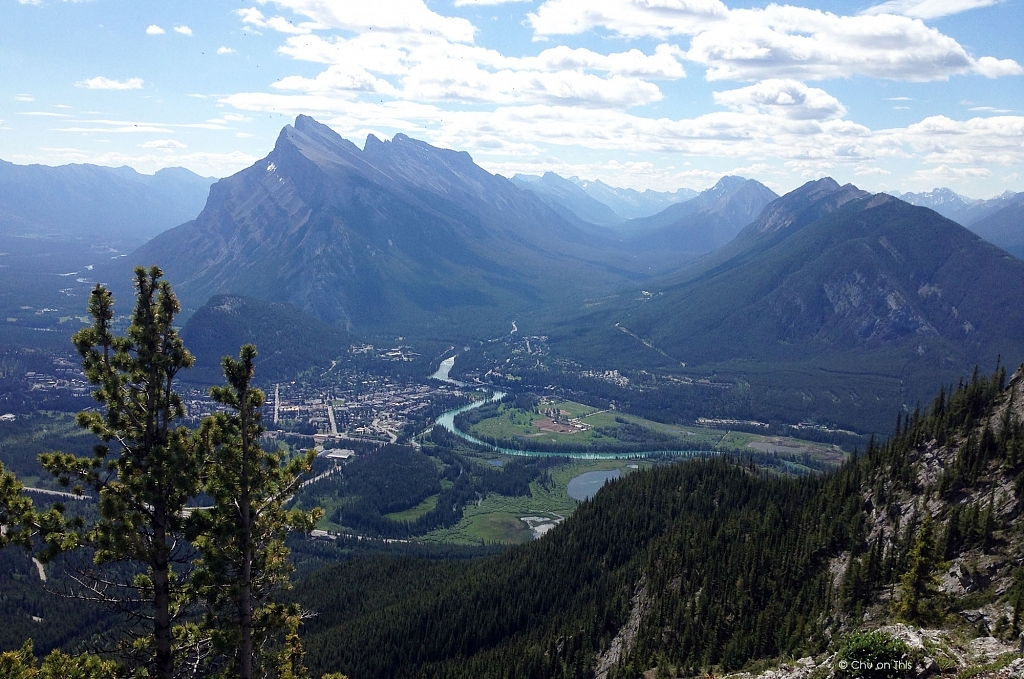 After having a quick bite to eat at Cliffhouse Bistro, Mt. Norquay’s Dave (thank you!) escorted me down the chairlift (we somehow also managed to film little “how to ride a chairlift segment before heading down), into a Jeep, and back to the lodge where I grabbed my suitcase and headed right onto the Banff Airporter shuttle, and onto a plane home, smelling of sweat, rocks, and pine needles.

Final Thoughts: There are so many people from faraway lands (notably Australia and the UK) who intended to visit Banff for a week, but love it so much that they decide to stay forever. After spending but three short days in this beautiful place again, I can understand why. I always recommend Banff to my friends visiting Canada from abroad, but I think we Canadians (especially us nature-deprived Torontonians) should take the opportunity to visit Banff more often ourselves. If you ever need a renewed sense of pride in our country, this will surely do it.

Disclaimer: I was a guest of Banff Lake Louise Tourism and my transportation, accommodation, excursions and meals were covered for this entire trip. I am not being further compensated for writing about my experiences. All opinions, including those about how much Jonny rocks, are my own. All photos in this post are taken by me unless it’s one of me, in which case, it’s taken by Lou, Davida, Jonny or Ethan.
Share on Facebook Share
Share on TwitterTweet
Share on Pinterest Share
Share on LinkedIn Share
Send email Mail
Print Print
adventureAlbertaBanffCanadianfood bloggers
NewerUncle Tetsu
OlderKorean Pork Belly Lettuce Wraps