My First Christmas in Norway 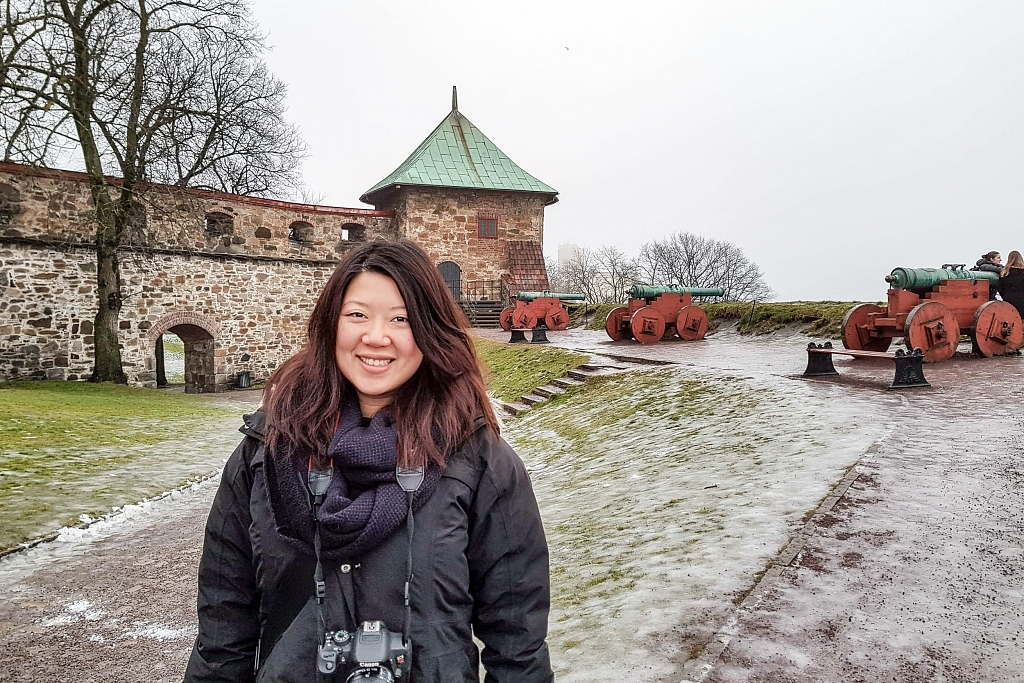 They say the best way to truly celebrate a holiday is to go to the source. While Christmas is now celebrated all over the world, the Norwegians often joke that Norway is where Santa Claus (or Julenisse) actually lives. After spending two weeks celebrating my first Christmas in Norway, I would believe it.

I landed in Sandefjord on a tiny propeller plane and immediately took in the cold, yet, extremely clean air. Cold and clean: many people often use these two adjectives to describe this Scandinavian country. It’s true of course. Norway has state-of-the-art technology, the purest drinking water, talented Winter Olympians, beautiful snow-capped mountains, and above all else, a strong commitment to maintaining each individual’s personal space.

However, I discovered that Norway also has a surprising amount of warmth to offer. 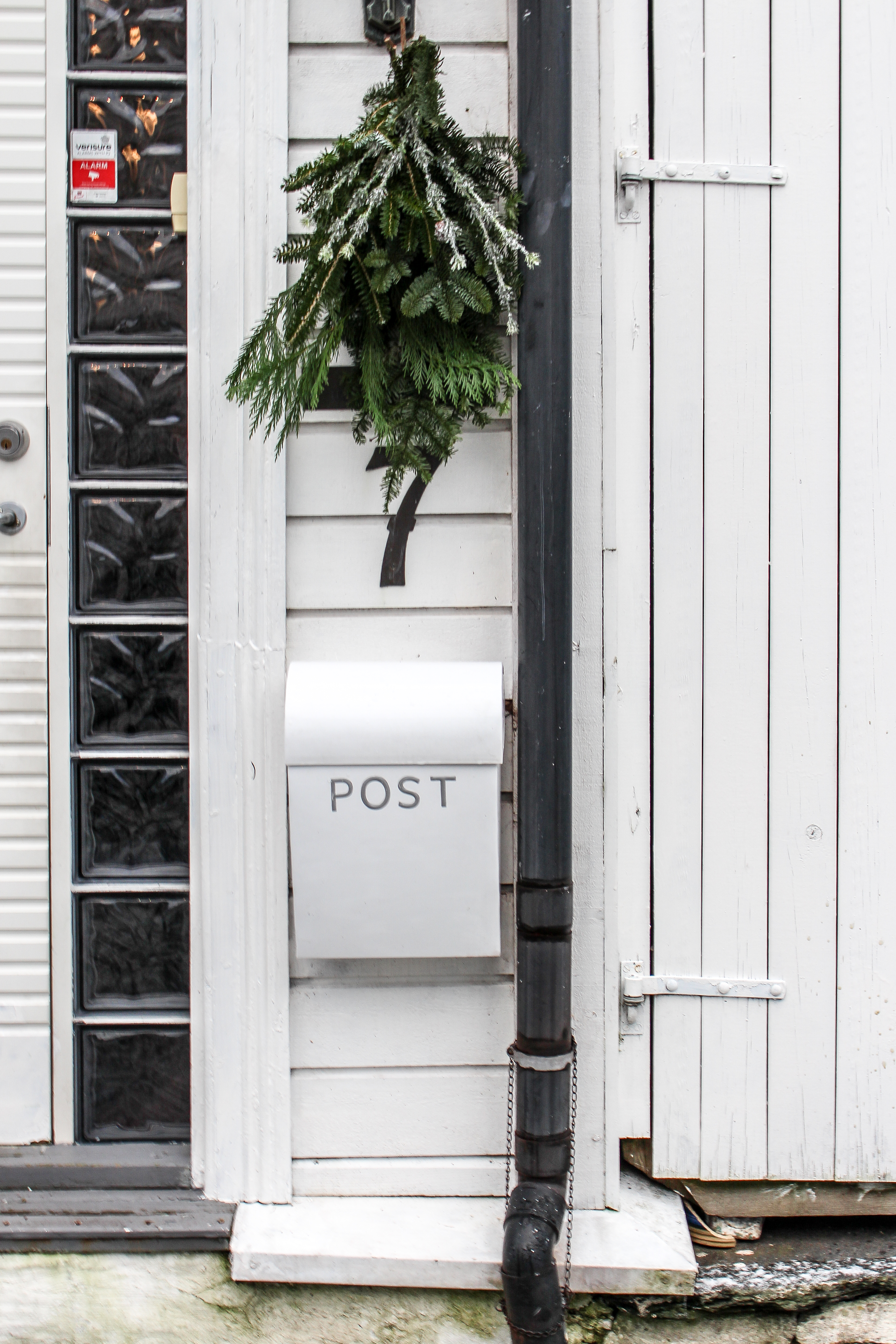 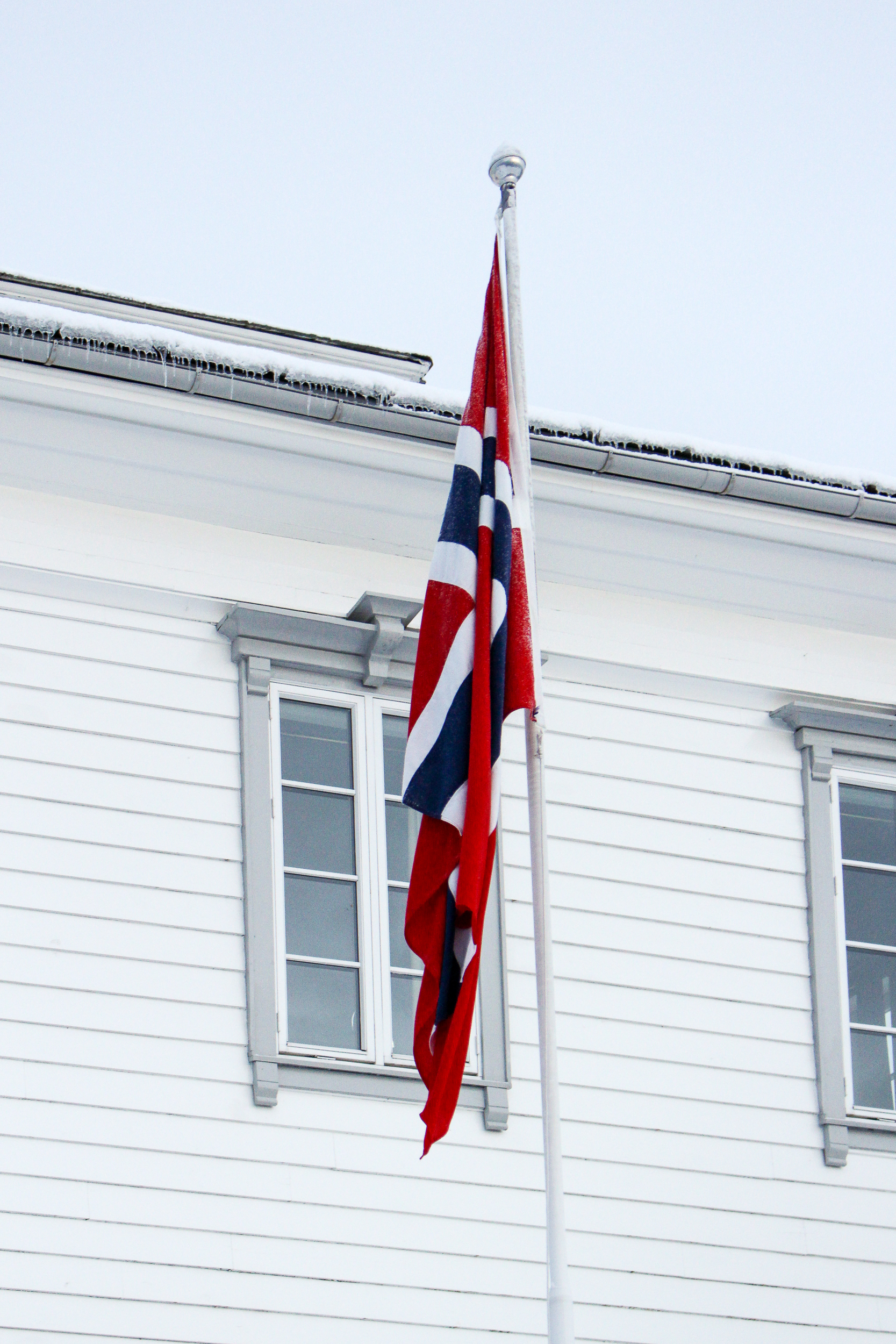 The Norwegians live in a fairly homogenous society and have many similar traditions from household to household. From Santa Lucia Day (December 13) to the Sunday Advents, the Christmas spirit in Norway lasts for the entire month of December and is celebrated with great zeal.

Moreover, a strong feeling of collective hygge is present throughout this month. If you follow enough lifestyle bloggers, you may be familiar with the term. Loosely translated, hygge is a Scandinavian word used to describe a happy feeling of cosiness and comfort, mostly associated with, and popularized by the Danish. The Norwegians use the term hygge, but they also use the term kos, which roughly means the same thing. Snuggling up in blankets with wool slippers around a fire. Eating cinnamon scrolls with coffee in a small cafe. Walking through a quiet snowy city with a cup of gløgg (a Norwegian mulled-wine-like Christmas drink made with berries) in mittened hands.  All of these everyday experiences were somehow so much more enjoyable here. 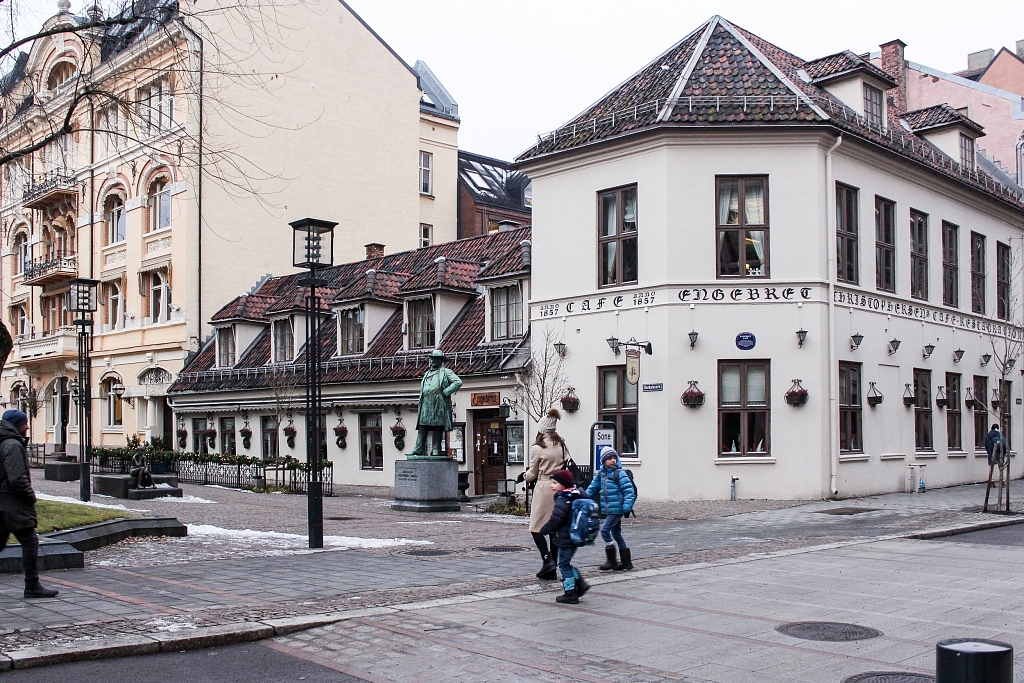 Generally speaking, Norwegian food is quite simple. Dinners often feature meat and potatoes, but breakfast and lunch tend to feature some form of bread as an essential component.  In fact, bread is so important in Norwegian culture that the Norwegians have the untranslatable word pålegg which means, “whatever you decide to put on the bread”. It could be ham, cheese, jam, or pickled herring, you name it. If it goes on bread, it can be pålegg. By the third day of my trip, I realized I had conditioned myself to start thinking about bread and pålegg as soon as I smelled the first whiffs of morning coffee. Since then, I have developed a bit of an obsession with brunost, a sweet brown cheese with a rich aroma and taste of cardamom. I also fell in love with the idea of smørbrød (why two slices when you can get away with one?) which is the Norwegian term for a specific type of open-faced sandwich. Lefse (a potato flatbread), sourdough buns, and knekkebrød (crispbread) are also great bases for almost anything. 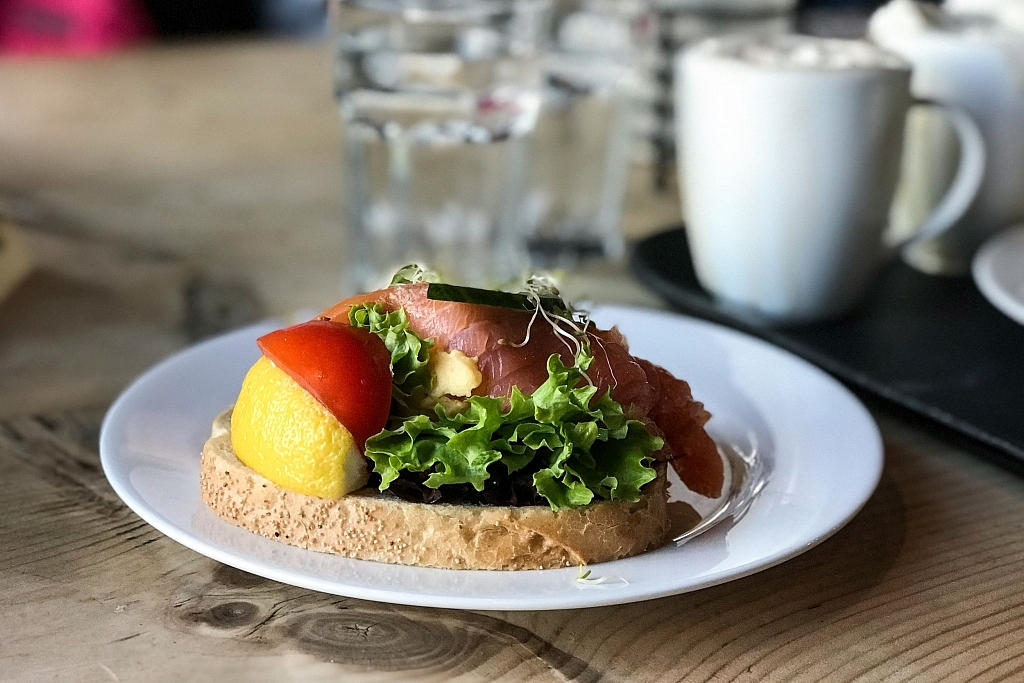 For most families, December 23, or “Little Christmas”, is the night when the Christmas tree is unfurled and decorated. Other common traditions (making pepperkake houses or garlands) may vary from house to house, but DW has assured me that most families incorporate the risengrynsgrøt (a hot rice porridge topped with sugar, cinnamon and butter) into the evening’s celebrations. An almond is hidden in the grøt, and with much anticipation and laughter, the person who later finds the almond in their bowl wins a marzipan pig (as a side note, DW’s sister found the almond and hid it in her mouth for over 30 minutes to watch the rest of us continue cautiously eating in vain). The nationally broadcasted variety show Kvelden før kvelden (the Evening Before the Evening) serves as a good backdrop to the evening as well. 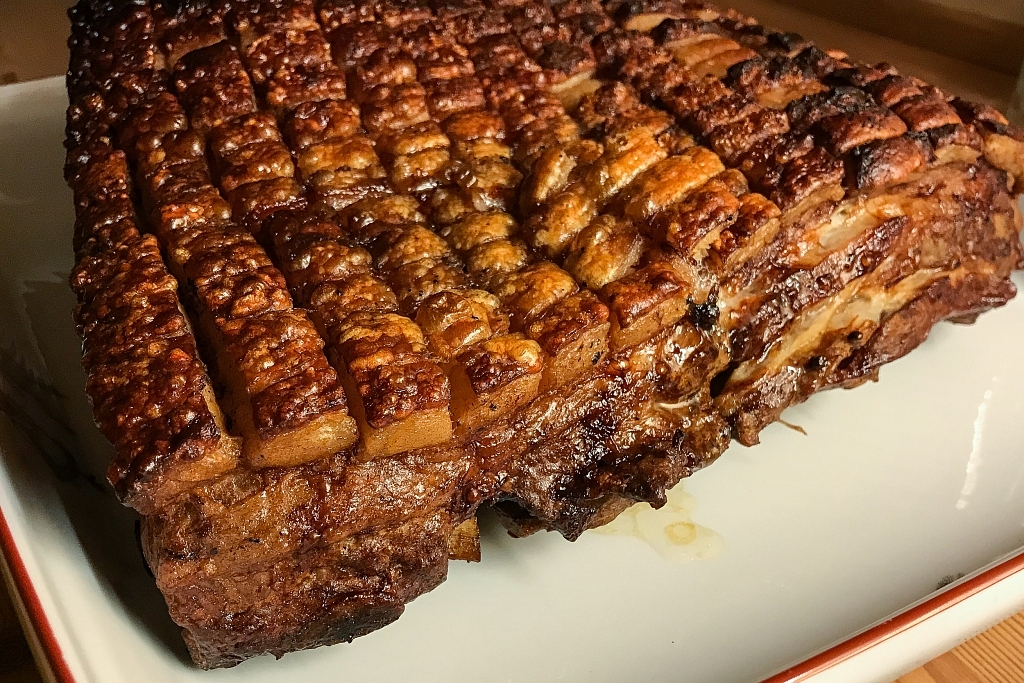 Unlike in North America, Christmas Eve is the single most important day of the season. And of all the traditional dishes, the ribbe is arguably the most traditional. DW had been talking about this Christmas pork dish over the course of several months, but it was only after arriving in Norway that I realized just how important it was. In fact, the dish (and the crackling!) is so much a part of the evening’s traditions that the State Channel has a TV segment running intermittently all day called Ribbe minutt for minutt (Ribbe, minute by minute) where they film a giant slab of pork roasting in the oven. That’s literally the whole show.

Other classic main dishes served at the dinner table include lutefisk (cod cured in lye), pinnekjøtt (dry-cured ribs of lamb), boiled cod, ham roast, or turkey (but definitely not all at once!). For the non red-meat eaters at our table, we had halibut instead of lutefisk because, well, cod cured in lye simply isn’t appetizing to everyone, even if tradition dictates it. That’s the thing about traditions. You can take what you love and you leave the rest. We also enjoyed a large platter of boiled Mandel potatoes, two kinds of sauerkraut, and two kinds of rich sauce (the idea of melting a little brunost into pork gravy is so genius). I also loved the cute julebrus (Christmas soda) bottles that are only available at this time of year.

After dinner, and accompanied by a tray of cookies and large mugs of tea and coffee, we moved to the living room to open presents by the tree. It was a new experience for me, but I enjoyed it wholeheartedly. 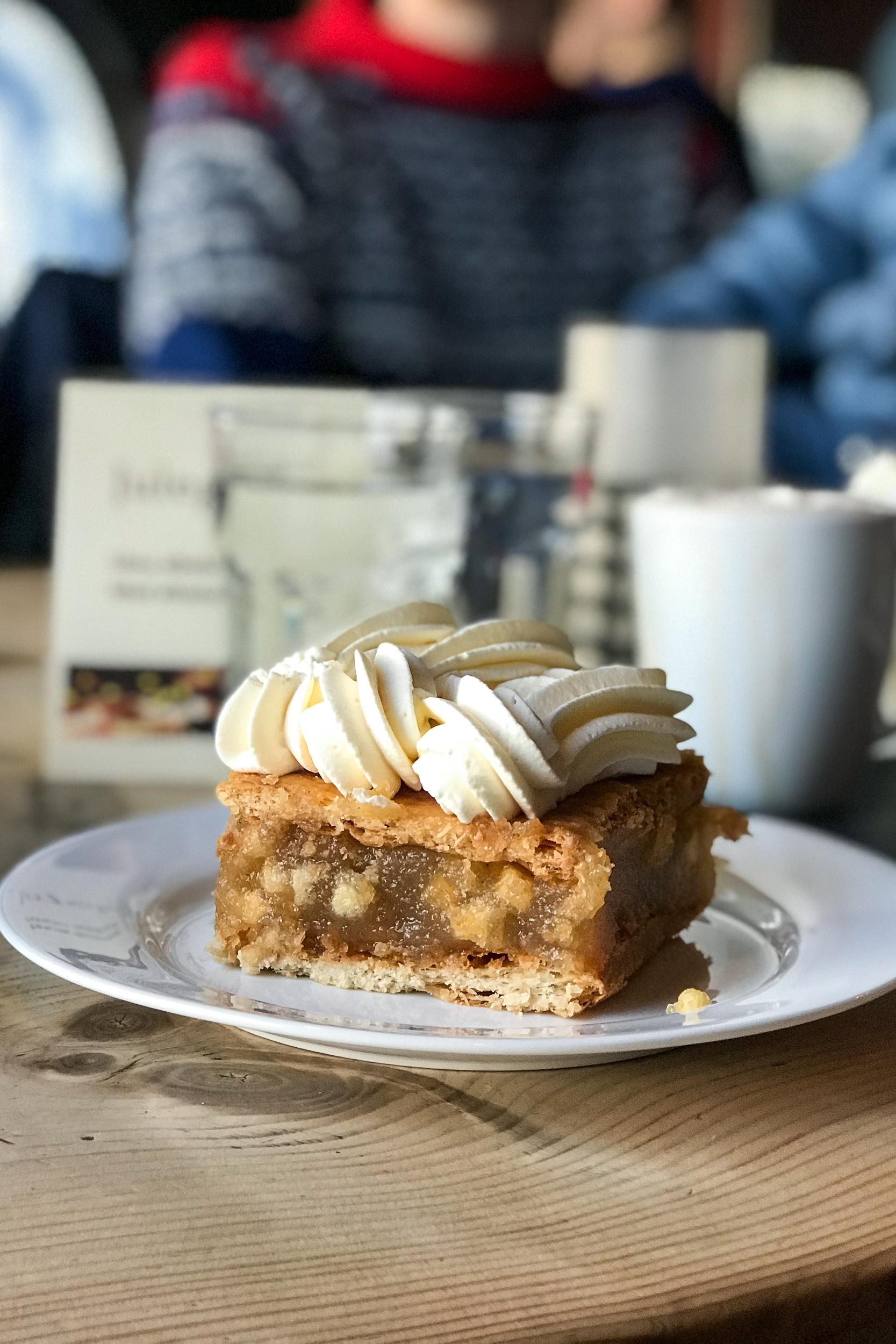 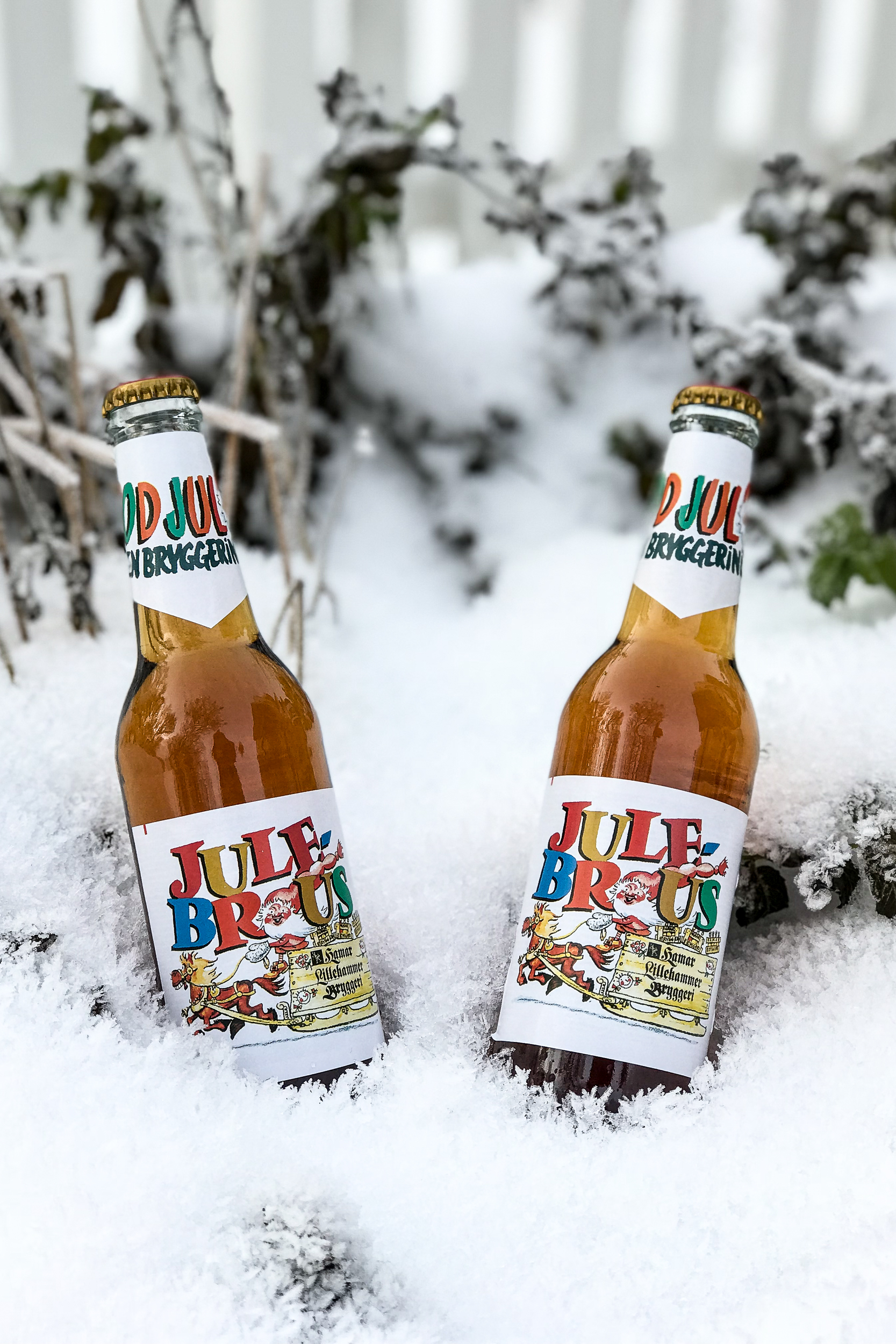 If you’re looking for a death-defying experience, look no further than the Korketrekkeren toboggan run (originally built for the 1952 Olympics). The corkscrew-like hill is so steep and so intense that someone gets taken away in an ambulance every day. Yet, people still sign up in droves! The best part is that you can take the metro (8 stops) from the bottom to the top of the hill to arrive at a lodge called Frongnerseteren Restaurant og Kafe, where you can enjoy overpriced but comforting “après-sleigh” (my term) food such as hot cocoa and rømmegrøt . Their eplekake (apple cake, pictured above) is their most famous dish and also, their wifi password. The toboggan run is not for the faint of heart, but the views up here are worth the trip alone. While you’re up here, you should probably also stop at the Holmenkollen Ski Jump, which happens to be Norway’s most visited tourist attraction. 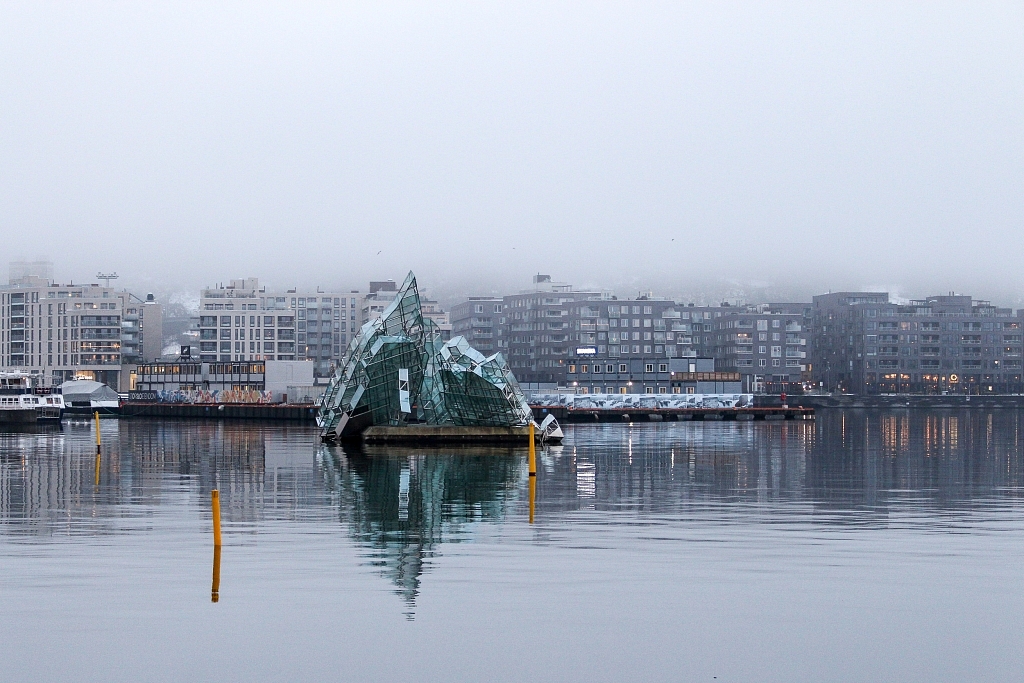 Our other memorable experiences in Oslo included watching the new Star Wars movie at the Colosseum Kino (though I definitely regret picking up a box of the intriguing “Bacon Snacks” as an alternative to popcorn), scaling the Oslo Operahouse, taking a walk through the Vigeland Sculpture Park, visiting the Akerhus Fortress (where I am pictured in the photo above), and poking around the Royal Palace.

The Grand Café at Grand Hotel Oslo was one of the only “good” restaurants that managed to stay open for at least a few days during Romjul. mostly for the sake of the tourists and their guests. While much of the interior and the menu has changed over time, the Grand Hotel is still a beautiful historic place to eat in the heart of the city and serves very contemporary interpretations of Norwegian classics. The prices are high (of course) but not nearly as high as you might imagine.

My trip to Norway was a very personal one and a much-needed vacation. So, while I can’t share everything with you (and I will admit that with the dim lighting and lack of intention, some of my delicious food photos looked more like blobs of brown goop anyway), I think it’s clear that when it comes to Christmas, the Norwegians are doing it right. I loved how cold and clean Norway was. However, as I’m sitting here blogging at my kitchen island, sipping my coffee between bites of a crispy potetflatbrød topped with brunost, I think it’ll be the warmth of Norway that I’ll be reminiscing about the most.

Check out A Weekend in Bergen to see the rest of my Norwegian trip!