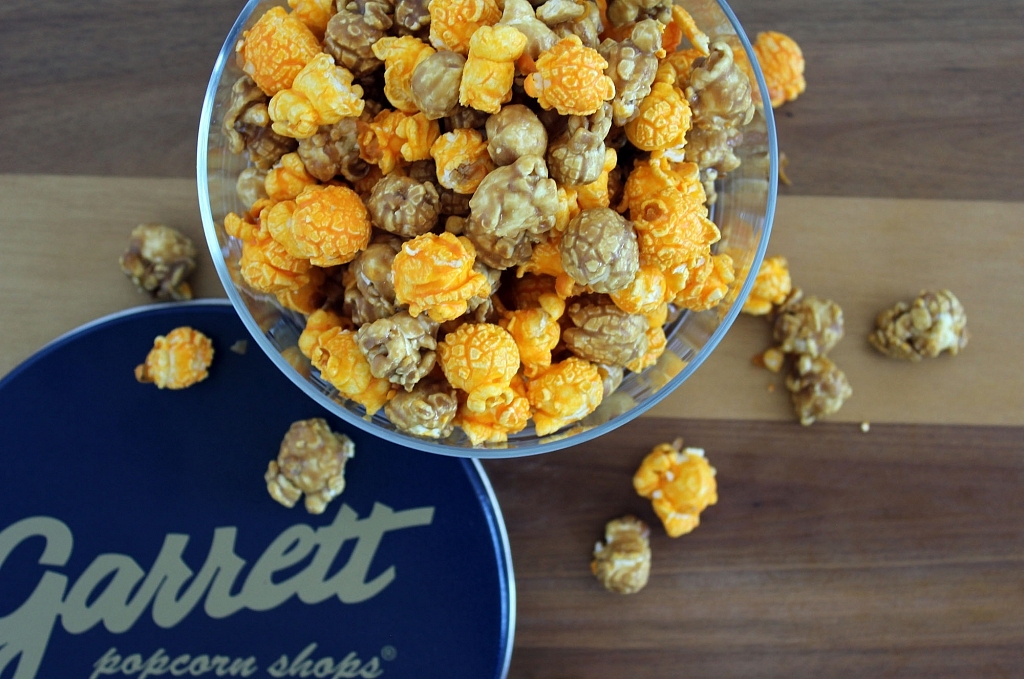 In September 2013, I made my first trip to Chicago. “Ah, the Windy City!” I threw my arms out and exclaimed. Just kidding. Chicagoans are a serious bunch, so naturally, I just kept my hands by my side, and put on my responsible tourist face as Andrea and I tried to figure out where we needed to go. But on the inside, I was so excited. That weekend in Chicago turned out to be one of the most productive and fun trips I have ever been on. Andrea and I had traveled together so much at that point that we had everything down to a perfect rhythm. I pick the food, and she picks the accommodations. I get us lost, and she leads us to the right place. It’s useful that we happen to want to do mostly the same things too (other than a brief 3 hour interlude that I spent at the Art Institute and she spent at DSW). While our plans were mostly spontaneous, there was one thing we knew we had to do right before leaving, and that was visit a Garrett Popcorn Shop.

Every single one of my friends who has visited this glorious city raves about this popcorn. So naturally, I was expecting some kind of Disneyland-level interactive popcorn factory to match the hype-level. Instead, I found a chain of little blue and gold shops with two or three employees each, containing basically tins, bags, a cash register, and giant bins of fresh popcorn. It wasn’t particularly flashy, and it wasn’t particularly expensive. But when I shoved that first handful of sweet CaramelCrisp and savoury CheeseCorn into my mouth, I knew I had hit a special landmark moment in my personal gastronomic history. The saddest part of that trip was not being able to bring more than two bags back each, as we had limited carry-on capacity.

Man, did I ever savour that popcorn. And then started to crave it wholeheartedly. Garrett’s has multiple locations throughout Chicago, as well as select cities in the United States and internationally. But they do not have stores in Canada. So on the same September weekend one year later, Andrea and I decided to hit up one of our favourite cities again, only this time, in a car with an empty trunck and no baggage restrictions. This second trip was a lot shorter, but we managed to bring back a heck of a lot more popcorn. Needless to say, it was also the perfect roadtrip snack!

Fast forward to March 2015, and I’m happily shoving the popcorn above into my mouth again. How? While they’re not opening a store in Toronto anytime soon, Garrett’s finally decided that there was enough Canuck demand to start shipping to Canada too (hallelujah!). Like they do in their stores, each batch is handmade fresh throughout the day (no preservatives, non-GMO kernels and no trans fats) in their traditional copper kettles, and shipped out the day immediately after. The corn was popped on Monday, I got a UPS notification on Tuesday, I received the box on Wednesday, and ate (most of) it by Thursday.

If you’ve never experienced it for yourself, you may be wondering at this point in my story why I have gone to such great lengths to get my hands on this snack. I mean, surely there must be other options. Indeed, you may have noticed that many grocery-store brands have recently started to bag versions of “Chicago Mix” (savoury cheese and sweet caramel corn)* themselves. But…they’re just so damn unsatisfying. I’m not going to tell you which brands you should and should not eat, but I’ll just say that Garrett Popcorn did not make it to Kuala Lumpur and Dubai by taking shortcuts. They’ve got plenty of flavours, and plenty of followers. They’re involved in local schools, and they’re involved at A-list events. They’ve been in business since 1949, and they’re not going anywhere. And unless you’re one of those people who religiously refuses to combine sweet and savoury, I’ll be damned if you don’t think the Garrett Mix® is the bomb dot com.

*As an aside, Garrett’s no longer uses the term “Chicago Mix”, preferring to proudly adopt their own name, and also because of legal reasons.

What, you thought I would just make you read this post and drool all over your keyboard without offering you an opportunity to try some for yourself? What kind of a heartless food blogger do you think I am? Well actually, this contest is now over (congrats to Janice Lawandi in Montreal!) who won a tin of Garrett Popcorn Shop’s Garrett Mix® shipped straight to her door. Thanks everyone for participating!

Disclaimer: Yes, this glorious tin of Garrett’s Mix was a gift from the Garrett’s Popcorn Shops’ team, but I was not otherwise compensated to write this post. However, no amount of free gifts could ever buy the kind of undying devotion that I have for this popcorn and my shameless promotion of it. If you’re a Canadian and would like to purchase some popcorn for yourself, you can contact Garrett’s Customer Experience Team at (866) 676-7267 (Monday through Friday, 8:00 AM to 5:00 PM (CST)) to place your order.
Share on Facebook Share
Share on TwitterTweet
Share on Pinterest Share
Share on LinkedIn Share
Send email Mail
Print Print
AmericanChicagoGarrettsIllinoispopcorn
NewerBoston’s Sweet Cheeks Q
OlderByblos