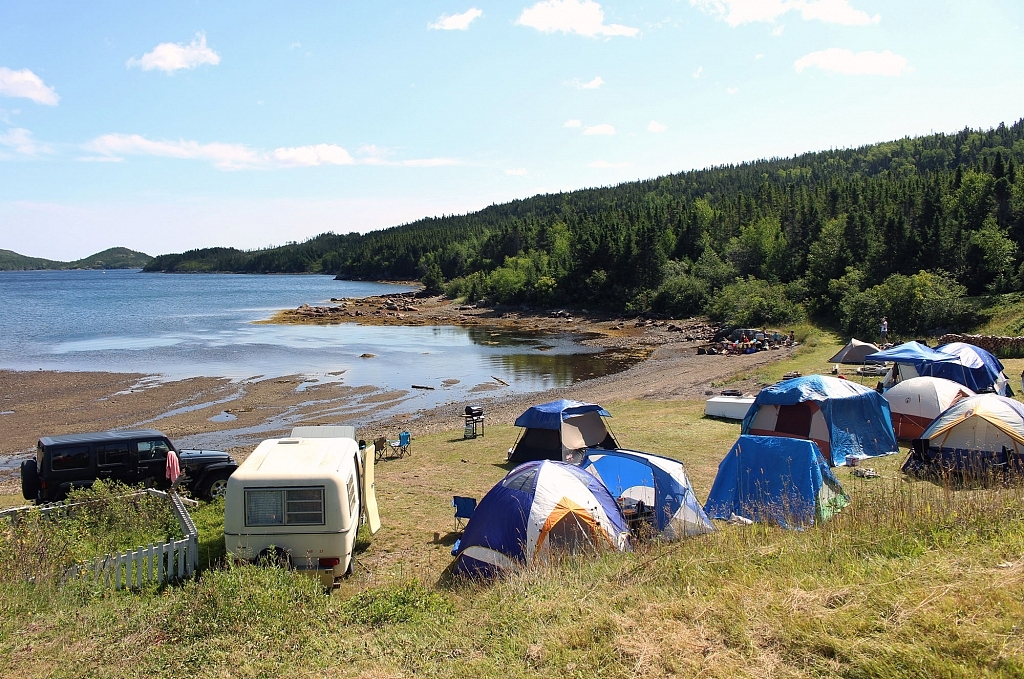 For a little context on how and why I was in Newfoundland, read this post first.

With my hair still dripping wet from our afternoon swim in the brook, I rummaged around my tent to find a casual dress to throw on before rushing out to join the final clusters of people migrating via car, foot and shuttle bus from Burlington to Middle Arm. It’s the last Thursday in August and the excitement for the opening night of The Gathering is intense. And yet, despite our best efforts, we still managed to arrive at the town hall fashionably late—media passes and “we’re clearly not from here” faces and all. Thankfully, the awkwardness didn’t last for too long. Matt, Caroline and Wendy (the Newfoundlanders in our crew) were welcomed at one table while others happily shuffled around a few chairs to make room for my New Yorker friend Blaze and me at the next. We had arrived just in time to receive a heaping portion of Jigg’s Dinner (a classic Newfoundland meal comprised primarily of boiled root vegetables, salt beef, and a generous serving of gravy) and we dug in eagerly. 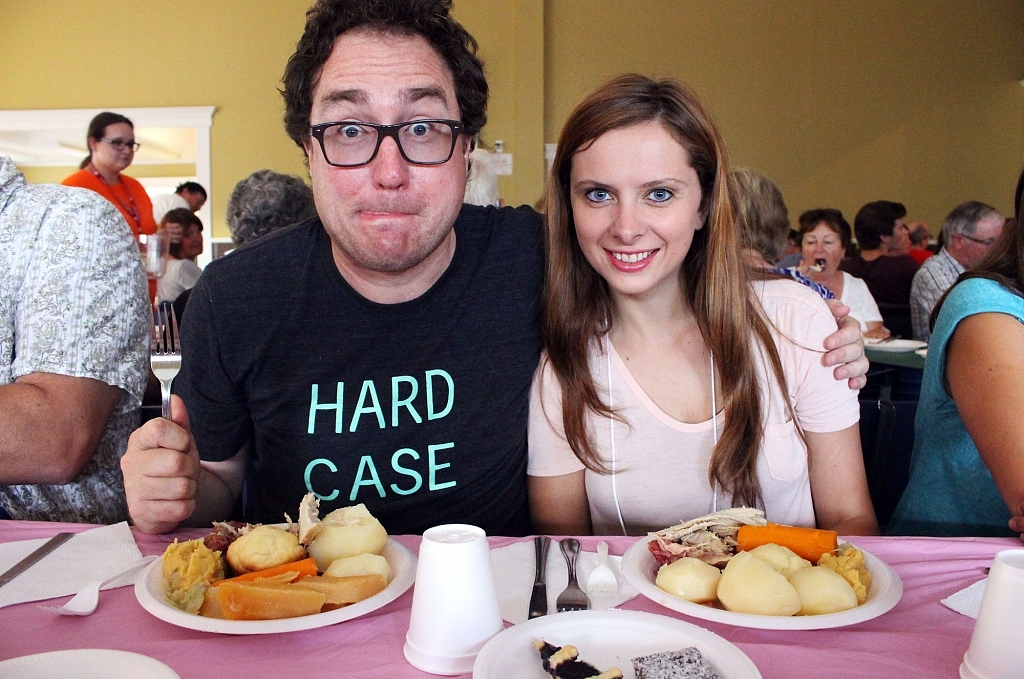 If I were writing this article as an objective journalist, I would probably tell you that The Gathering is a unique four-day event held annually in Burlington, Newfoundland (population: 365). This small town is home to Canadian comedian Shaun Majumder, whose most notable projects include his role on CBC’s This Hour Has 22 Minutes and his own W Network production, Majumder Manor. Relying on his passion and hometown hero celebrity status, Majumder was able to successfully round up all of Newfoundland’s best chefs, comedians and musical talents to help him create a one-of-a-kind festival for a group of 500 guests. It was a delightful experience.

However, this is probably the worst event to attend with journalistic objectivity. First of all, Shaun would probably kick you if you tried to refer to him by anything other than his first name. The original Mr. Majumder (Shaun’s father) would be quick to shut down the slightest whiff of big city antics while reminding him who has jurisdiction in this town. And despite the fact that his grand entrance into Tent City was by helicopter, Shaun’s primary concern upon descending was whether us Mainlanders (non-Newfoundlanders) would be cool using the natural waterfall “shower” in the bush or whether we would prefer using the shower in his camper. Clearly, this was not going to be like any event I’ve ever attended. Within a few hours of arrival, I shut off my phone (there was no cellular reception in the entire area anyway), stopped looking for a mirror to fix my hair, and just fully embraced the whole thing…whatever it was. 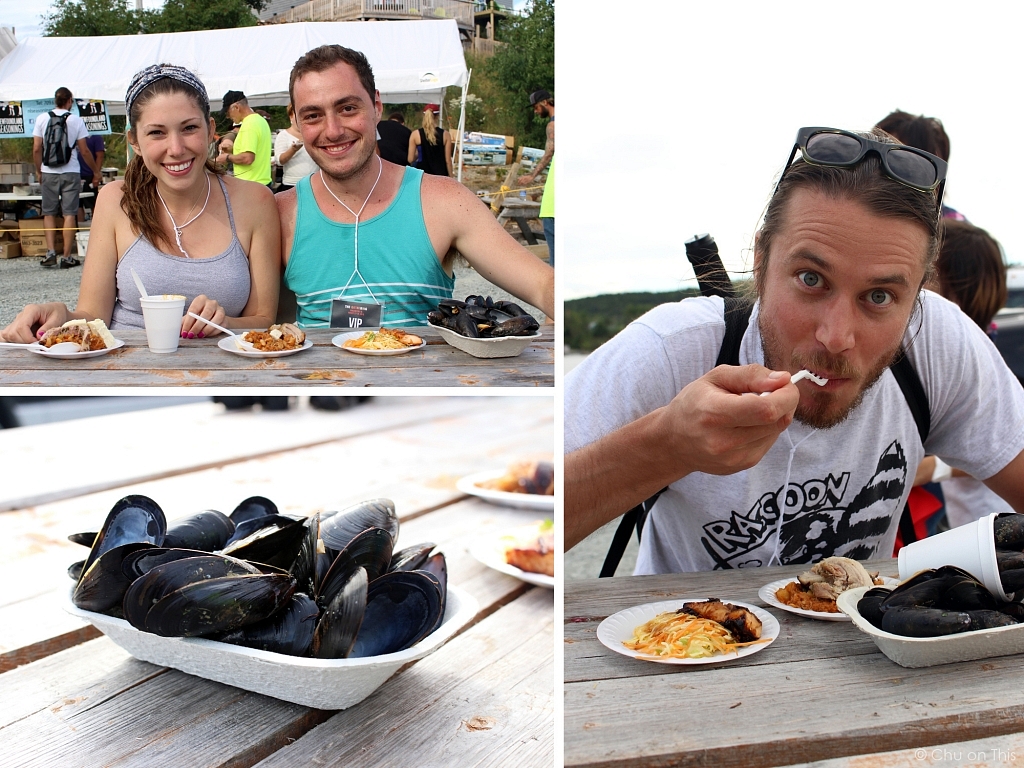 Throughout the weekend, most of the “gathering” took place at the Gathering Grounds, where the main stage was always lit up with a musical performance and a row of white tents promised an unlimited supply of delicious food. At any point in the afternoon, you might catch Chef Roary MacPherson of the Sheraton (the leader of the pack) ladling hot strawberry sauce onto toasted biscuits or Chef Steve Vardy of the Adelaide Oyster House steaming enough mussels for days. Chef Mark McCrowe of Aqua Kitchen and Bar* might tell you about how he found a new treatment of cod in the form of a Moroccan stew while Chef Roger Dewling places edible flowers on his (very loose but beautiful interpretation of) a Vietnamese pho dish. Chinched Bistro’s Chef Shaun Hussey might be debating which of his two chicken preparations to serve first while Adam Blanchard of Five Brothers’ Cheese (the only artisanal cheese maker in the province) explains to a concerned lady that his non-orange queso fresco is safe to eat. Finally, you might also catch Damian Marner, the self-proclaimed “Pirate Chef”, helping out here and there or otherwise just being another welcome addition to this burly, bearded culinary gang. 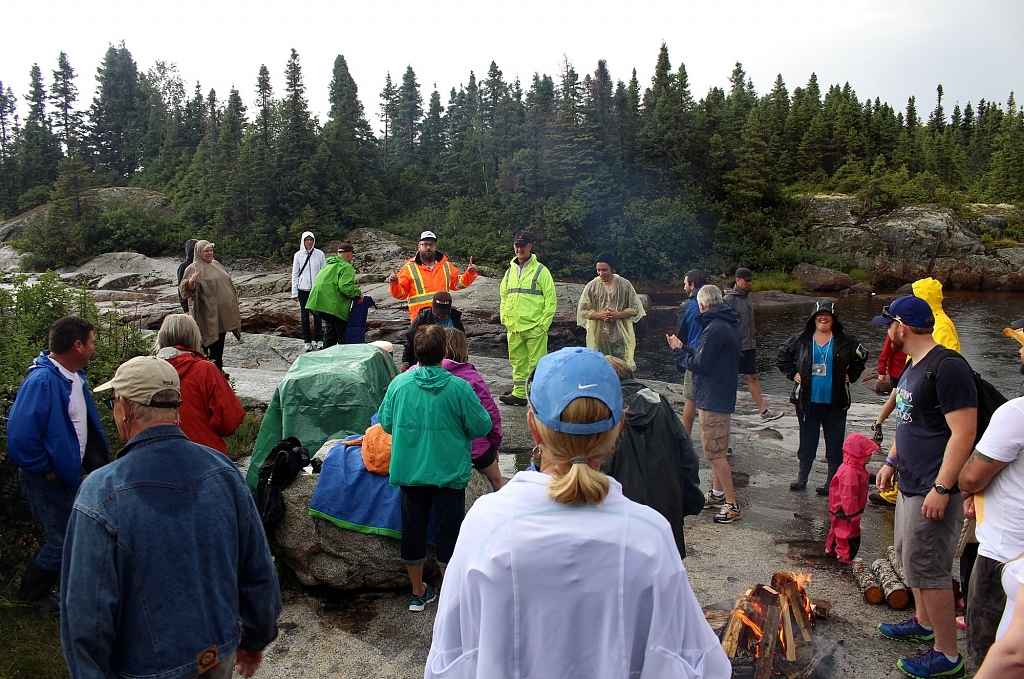 But you’ve heard the food-served-with-music-on-festival-grounds story before. This was so much more than that, and I was grateful that Caroline and Matt had dutifully signed us up for all the best ticketed events as well. On Friday, we found ourselves back at the brook for a lovely picnic (the torrential downpour had let up just in time). Originally, the Brook Picnic was supposed to be hosted by Raymond Restaurant’s rockstar chef Jeremy Charles, but I guess he was such a rockstar that he had to attend a last minute function in London that he couldn’t get out of. Thankfully, he had already prepared our nourishment, and sent his regrets while allowing his friend Chef Murray McDonald of Fogo Island Inn to take the reins. Just when you think you can’t find gourmet in rural Newfoundland, someone hands you a little brown box of vacuum-sealed smoked salmon to be paired with caper and dill cultured cream in a mason jar, and house-made lavash tied up with string and brown butcher paper. Though I eventually forgave him for leaving us hanging, his food just made me want to meet him more. 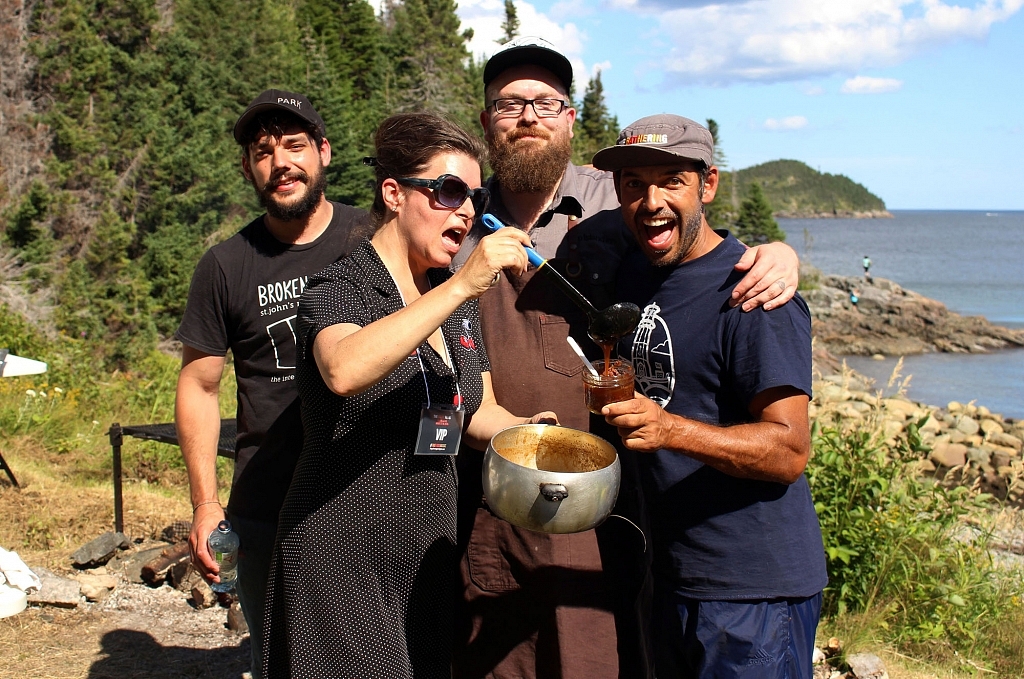 On Saturday morning, I laced up my boots and packed my little backpack in preparation for the Chef’s Hike. Talk about the road less taken. With boy scout-level enthusiasm, Shaun led us up a hill and through the woods, via makeshift “paths” that had been greatly muddied from the rain from the day before. Eventually, we arrived in a clearing and were greeted with the smell of sizzling meat and spruce needles, and a smiling Fogo Island Inn crew. Murray and his team had taken the “land” theme to heart (Steve Vardy had done a “sea” theme the day before) and prepared a caribou terrine wrapped in prosciutto, a partridgeberry and cranberry sauce, barbequed moose in a Chinese bun, and a wheatberry salad. For dessert, we enjoyed sweet and sticky figgy duffs, while sitting in the grass listening to the equally sweet sound of Sherman Downey performing with the Fortunate Ones on a little makeshift stage overlooking the Atlantic Ocean. You could choose to leave by foot or by boat, but you did not have the option to leave hungry or unsatisfied. 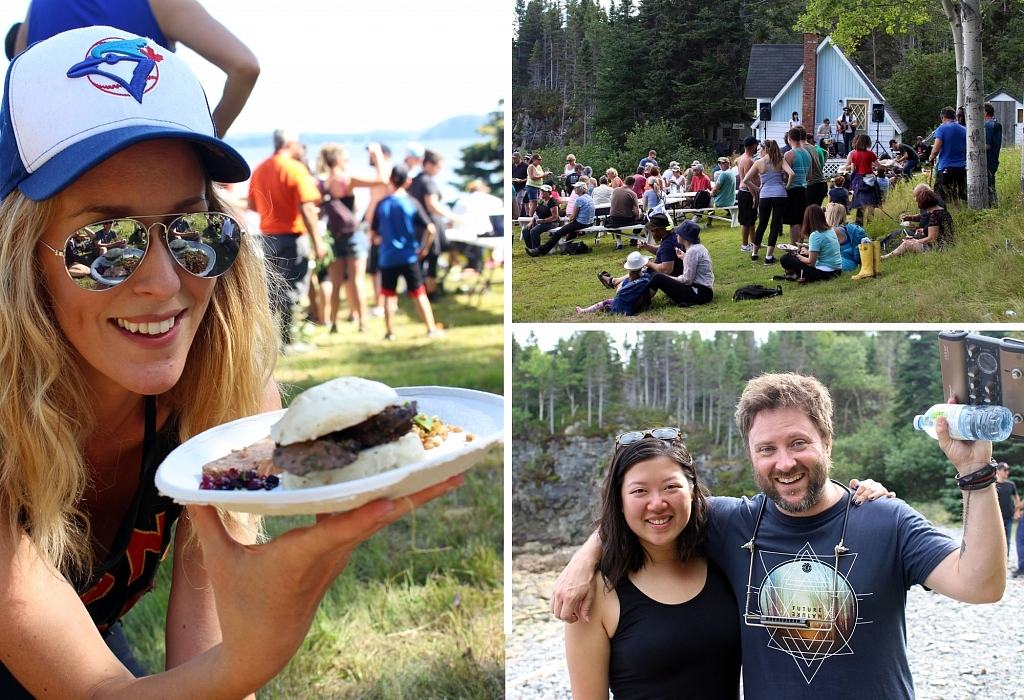 Susan helps me model the moose; Sherman and the Fortunate Ones performing; me and Sherman. 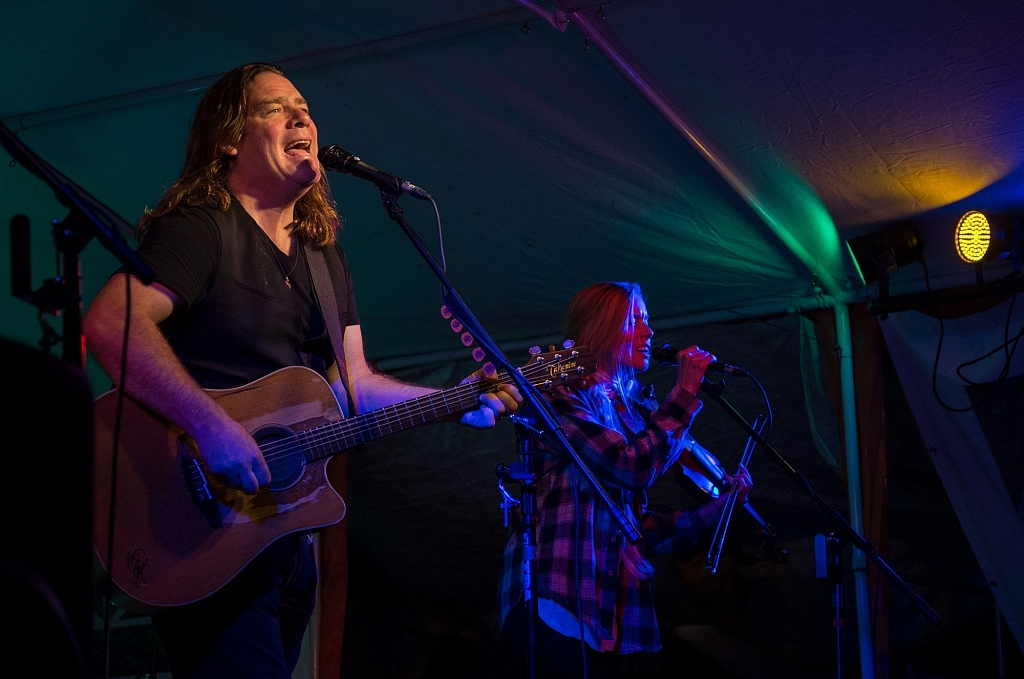 Unlike many other events I’ve attended, The Gathering almost served as a social contract whereby all the attendees agreed to engage in a unified experience without stress, hierarchy or complaints of technological difficulties. The guys who were funny told the jokes, the girls who could sing sang the songs, and the people who could cook made us the food. Though we were certainly entertained by 22 Minutes’ Mark Critch and Susan Kent, they came as Shaun’s friends to enjoy the Gathering, and not as comedian celebrities. And Alan Doyle was just a long-haired man with a casually soul-piercing voice.

More than anything else, I met some really great people. First, there’s Paula, who Matt had originally invited to join us because she was camping by herself. Not only did we eventually realize she was Wendy’s high school classmate and current neighbour, but we have since discovered that Paula’s new roommate in St. John’s is also my friend from undergrad in Ottawa. There’s brother and sister duo Ashton and Kate-lyn of Perry’s Cover Snack Buddies, who were so cute that they convinced Matt to buy a pack of (their grandmother’s) scones, even though Caroline had already packed enough food for us to survive an apocalypse. There’s Jamie (Caroline’s boyfriend) and the rafting boys, who despite me being very nice to, decided to throw me overboard into the Exploits River the next day anyway.

There’s also Newfoundland’s talented Wright Brothers, Matt the comedian and Reg the CEO of Gander Airport. The airport is doing great and I’m attending Matt’s show in Toronto in a few weeks. Finally (though I could talk about everyone else I met for days), I can’t forget to mention my new friends Reshmi Nair and Owen Leitch. We first bonded over food at the Brook but found ourselves having a little reunion at a Toronto food charity event a few days ago. Word on the street is that we’re all driving down together to visit Blaze in New York. 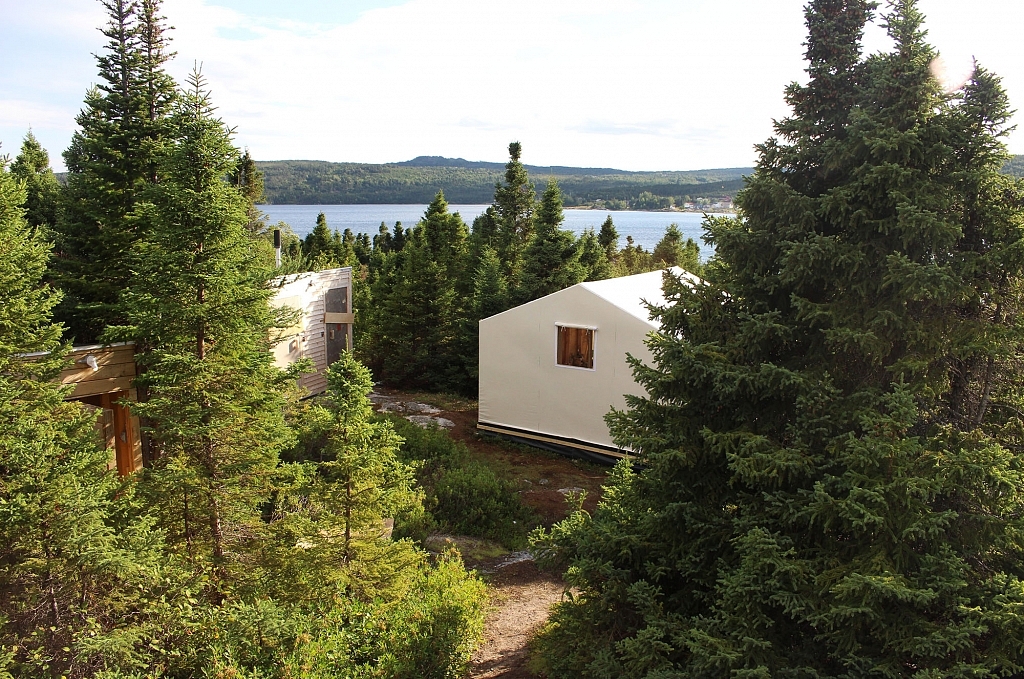 These are the kinds of friendships that you can only make by hiking through mud, jumping into bodies of water, and of course, huddled around a bonfire. It took me two months to finish writing this story and for good reason—I simply cannot capture all that the Gathering was in 1300 words. Thankfully, there are only nine months left until The Gathering happens again. Maybe next time, I’ll see you there.

Disclaimer: I was a guest of Adventure Central Newfoundland and my transportation, accommodation, entertainment and most meals were covered for this entire trip. However, creative direction and opinions are completely my own and Adventure Central Newfoundland did not review this post prior to publication. Photo of Alan Doyle taken by Blaze Nowara. Aqua Kitchen and Bar is no longer in business but Mark McCrowe certainly is.
Share on Facebook Share
Share on TwitterTweet
Share on Pinterest Share
Share on LinkedIn Share
Send email Mail
Print Print
CanadianIn the CountryNewfoundlandtravel
NewerRoasted Char Siu Pork
OlderClassic Italian Meatballs