What to Eat at Shilin Night Market 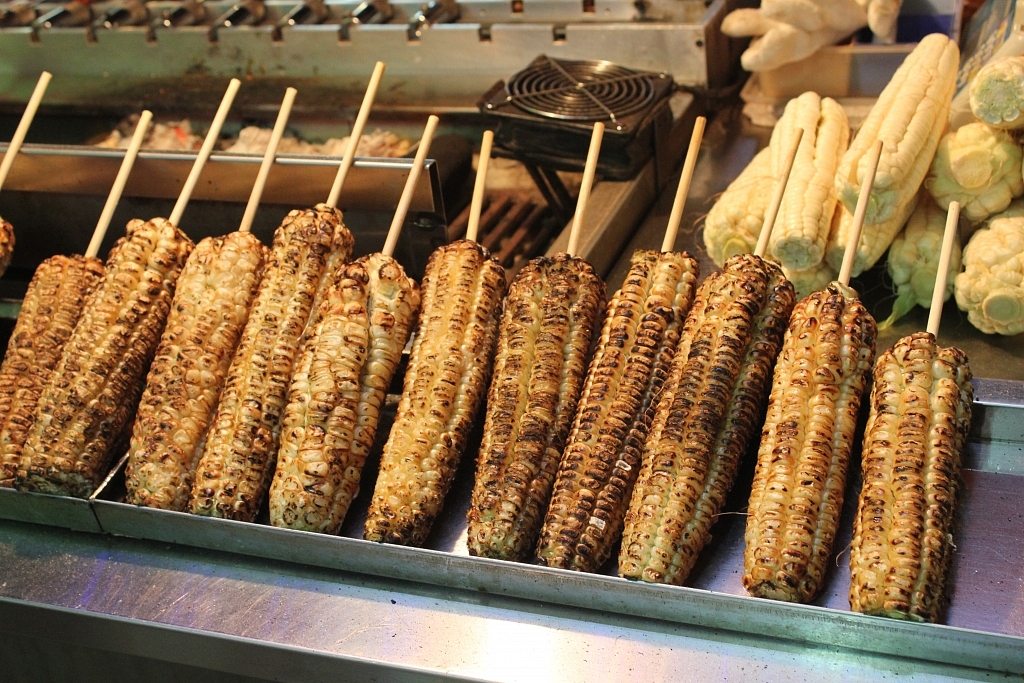 Of all the things that Taiwan is famous for, its night markets are always among the top tourist destinations. And in Taipei, Shilin Night Market (士林夜市) is the place to go. While some may argue that it is getting a little over-commercialized, this is still undisputedly the largest and most famous night market in the capital city. The market is divided into two parts: a roofed food court (which only has food) located opposite the Jiantan MRT Station, and the main part, which is just like any other night market, with shops stretching from Wenlin Road, Dadong Road and Danan Road, and food stalls and shops interspersed between.

Pictured above is roast corn, which is similar to what you might find in other cuisines (notably Southern USA and South American) but the glaze in Taiwan is much sweeter. Though tempting, I almost never get roast corn, simply for the plethora of other exciting options available! Though there are a million different things to eat, I will highlight a few that are “safe for a Western palette”. While some people are more adventurous and can eat anything (this is a great place to try out some new stuff!) I want to be honest and provide some guidance for more people who want to leave with the best impression possible even with a sensitive stomach.

Biscuit in a Biscuit

For this visit, I came with my dad and my dear friend Tessa (who was visiting all the way from Ottawa!). He insisted that she try Da Bing Bao Xiao Bing (大餅包小餅) which is literally a “biscuit(or bun) in a biscuit”. Tessa laughed (though you can’t laugh too hard because the inner crispy bun will fly everywhere) as she ate it, saying, “how has this only been introduced to my life now?” I know for a fact she still dreams about these sometimes. It’s wonderfully carby, and each of the crispy biscuits has a slightly different flavour profile. 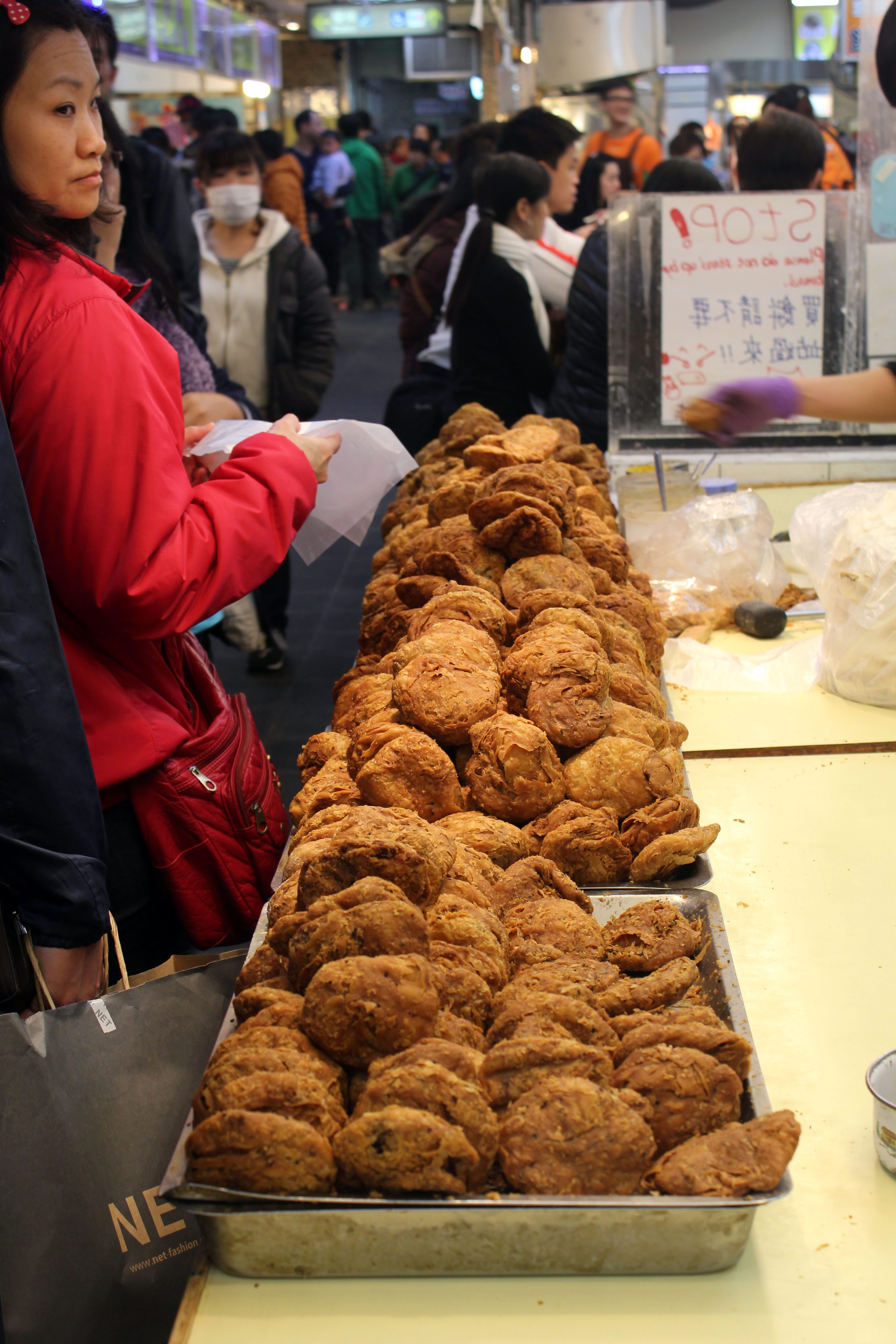 Then, you have the famous Shilin Giant Sausages. I don’t really think that these need much explaining, other than a caveat that, of course, they will slice it for you! Taiwanese sausages (like many other things) are much sweeter than their European or North American counterparts, and have a denser texture. At the same sausage stall (there are many, and each will say that they are the most famous sausage stall in Taiwan), you will find my favourite night market go-to, the Da Chang Bao Xiao Chang (大腸包小腸), literally translated to “Large Sausage wrapped around Small Sausage”. I swear the other food names are (slightly) less ridiculous. The large “sausage” is actually glutinous rice in a casing, cut in half, topped off with pickled salty radish, fresh cucumber, a few sauces, and then a smaller pork sausage. Good luck manoeuvring this one! 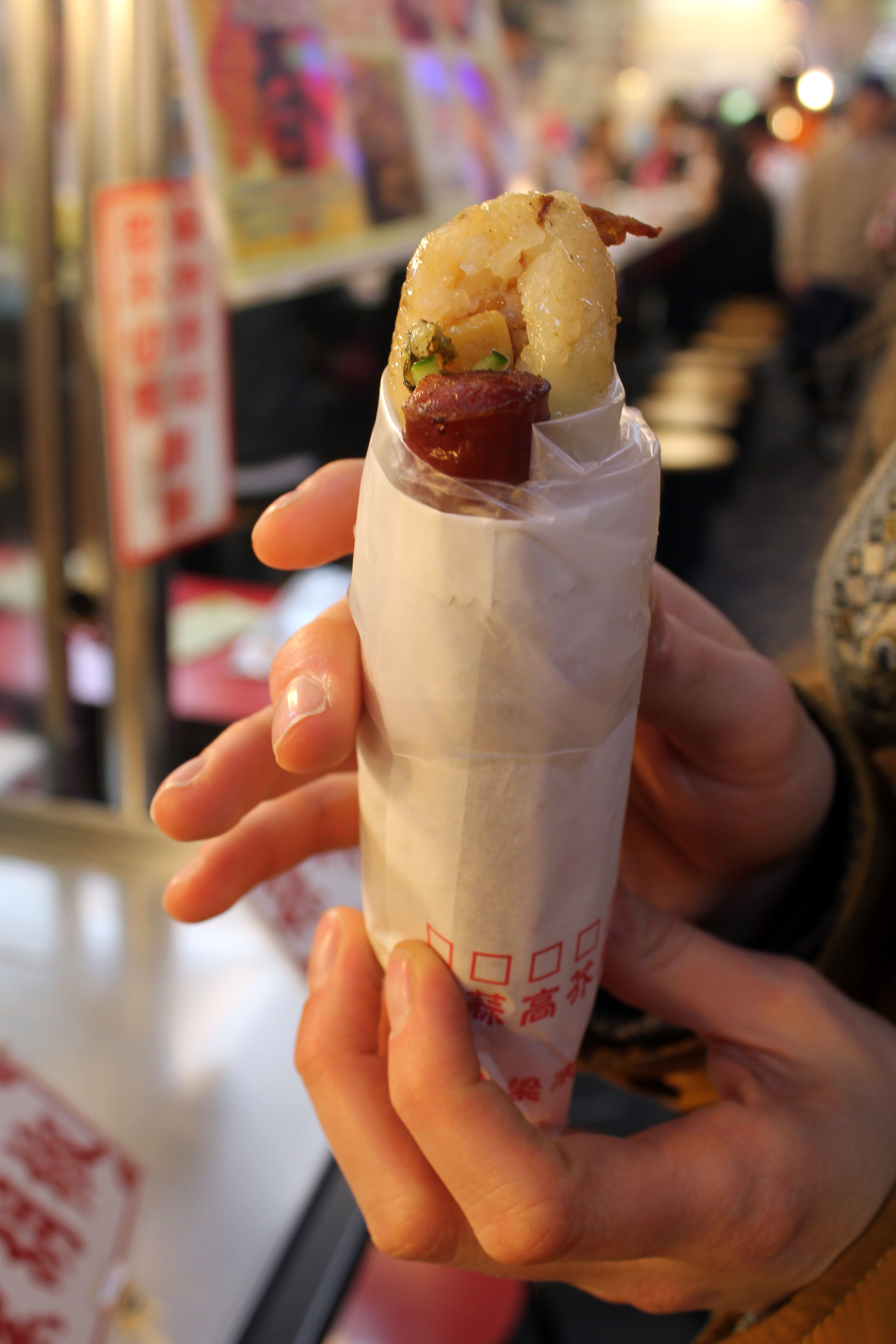 A third delicious option is the Hu Jiao Bing (胡椒餅) or Pepper Pie. For the observant folks, the word “餅” (bing) is a general term that can range from bun to biscuit, to pie to cookie. There are a few different stalls that sell this, but you want to look for the longest line, which belongs to Rao He (饒河) 胡椒餅, with its original and most famous located at the night market by the same name. If the line doesn’t seem to be moving, it’s because they make a batch at a time, so you’ve simply caught it during the baking process. 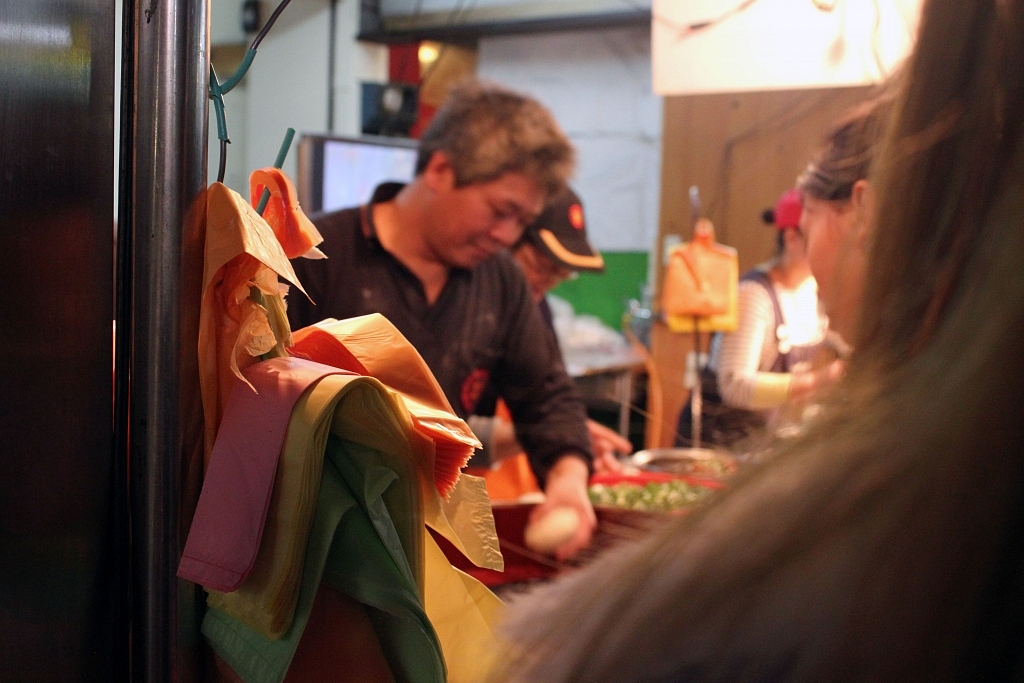 The filling consists of loosely ground pork marinated in a special sauce with a generous amount of scallions and black pepper. After baking in the small open charcoal oven, the pie becomes golden brown and oh-so-crispy, with the sesame seeds giving off the most amazing aroma. The filling explodes with juicy flavour and makes for the perfect combination. Also, when I say explodes, I mean that in the most literal sense, as I severely burnt my mouth when I bit into it (The steam! The steam!) and had to ask a nice lady at a nearby bubble tea place for a bag of ice. A true testament to that delicious pepper pie is how I managed to eat it anyway…with a bag of ice pressed to one side of my face and smile plastered to the other. 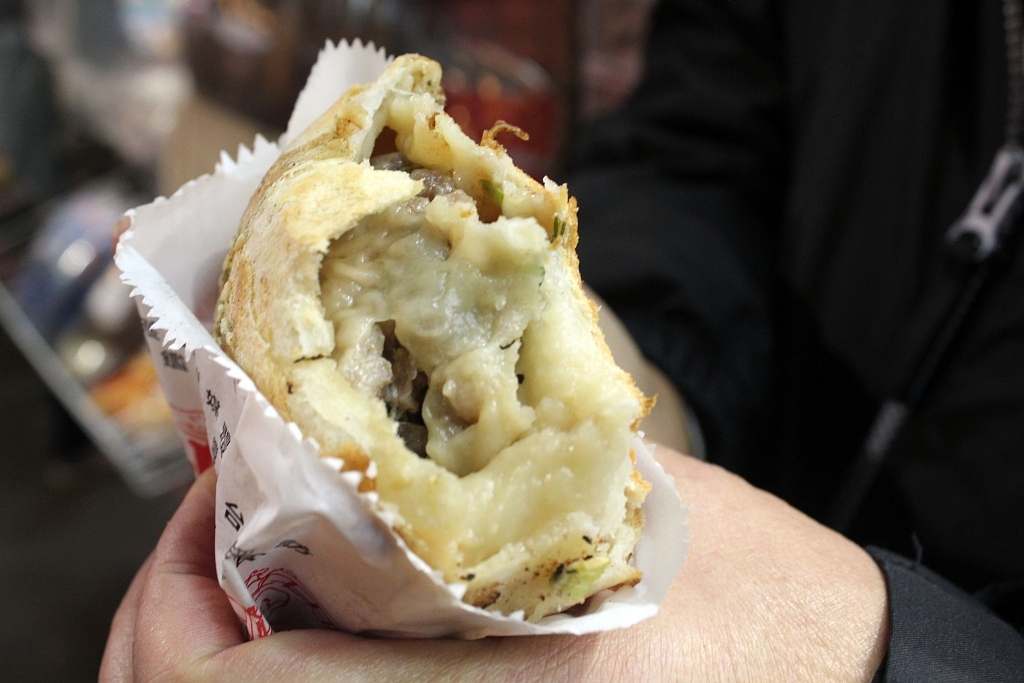 If you want something even sweeter, how about deep-fried milk? Also known as Zha Xian Nai (炸鮮奶), this is basically the street stall equivalent of deep fried ice cream, except it’s custard, and it’s on a stick. Man oh man, this is good stuff. 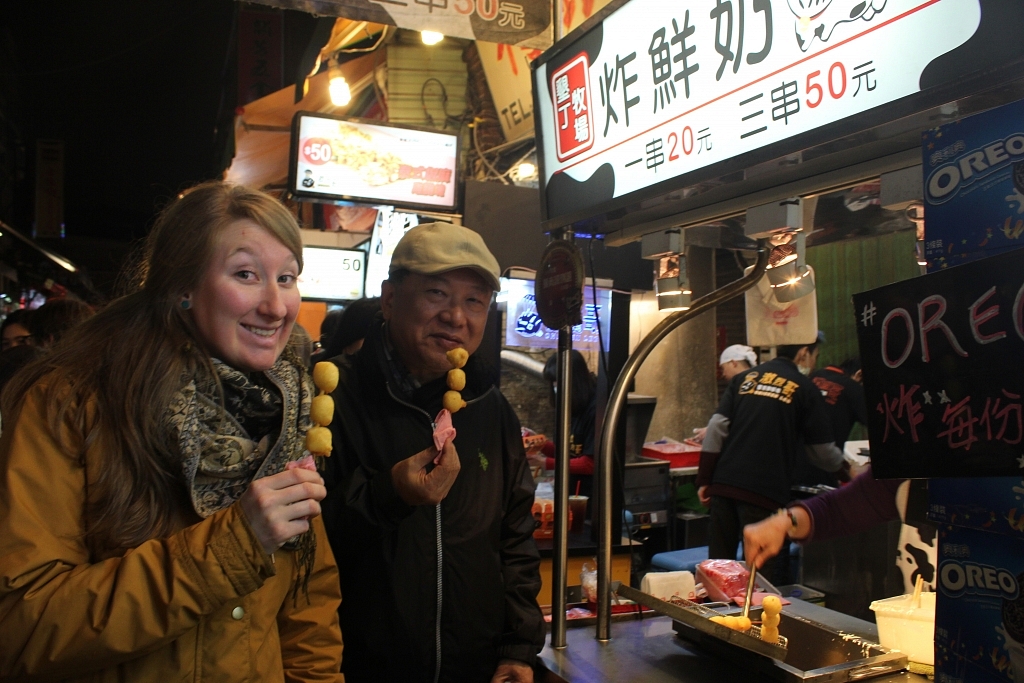 Not pictured here, but worth mentioning are two of my other favourites: Zhu Xue Gao (豬血糕) or Pig’s Blood Cake, and the Oyster Omelette, or 蚵仔煎 (pronounced Oh-Ah-Zen, which is Taiwanese, not Mandarin, like everything else listed above). While Pig’s Blood Cake sounds pretty gross, it’s actually one of the best things in the world. Because it’s made mostly with glutinous rice, the flavour is very mild, and is served with a glaze of sweet chili, and topped with crushed peanuts and cilantro. Finally, my mom’s favourite is the oyster omelette. Fresh (hopefully) oysters are thrown down in a large griddle with lettuce and topped with an egg and tapioca flour mixture, and served with a sweet and sour hot sauce.

If there is anything more Taiwanese, I don’t know it. Enjoy your visit!

Getting There: Get off at Jiantan (劍潭) MRT Station (Ironically, not Shilin (士林) MRT Station) and follow the signs. It is best not to drive there as the parking is limited, and parking garages are far away.