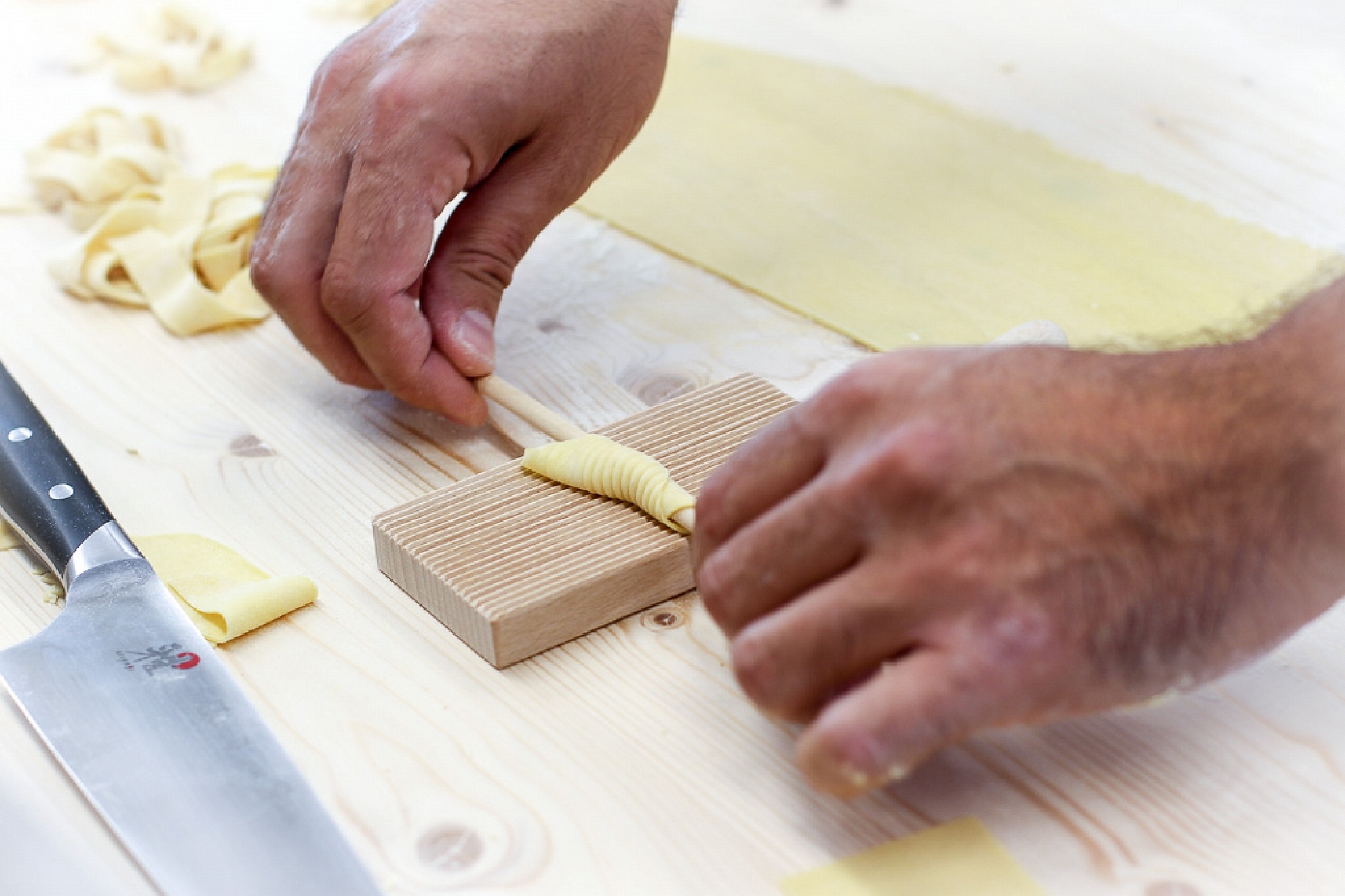 An Italian Education Part I: The Art of Pasta Making 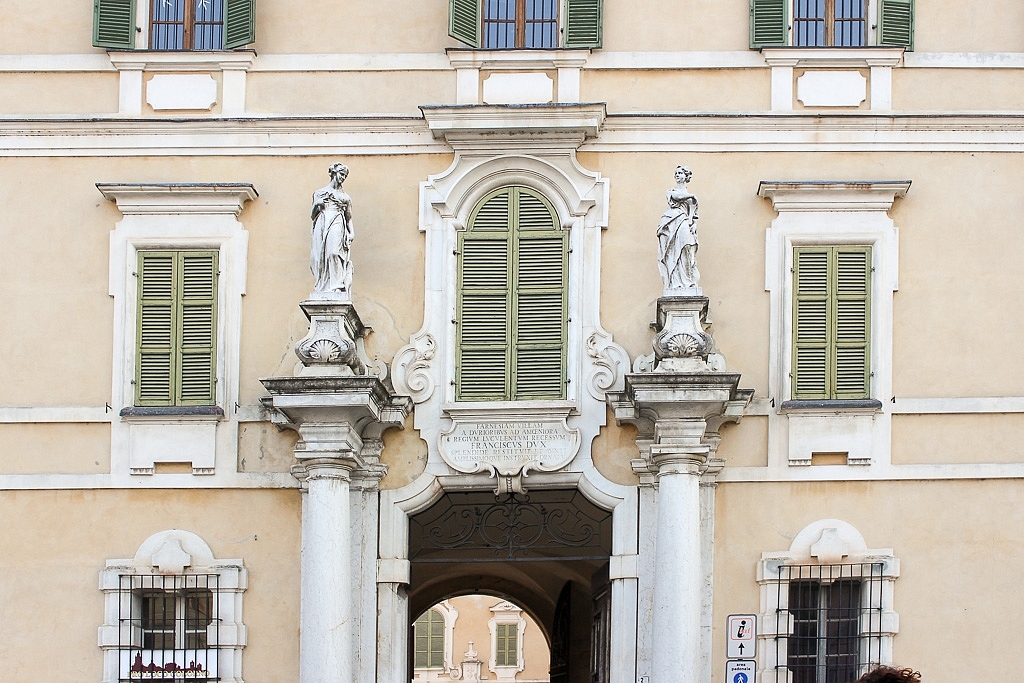 “An Italian Education” is a series I created to reflect on my recent trip to the food regions of Emilia Romagna and Lombardia in Italy with True Italian Taste as an ambassador of Toronto and the Italian Chamber of Commerce of Ontario. Along with a representative from each of Italy’s Chambers of Commerce throughout North America (New York, Chicago, Atlanta, Los Angeles, Houston, Vancouver, Montreal and Mexico City), we ate our way through incredible factories, restaurants, shops and schools on a once-in-a-lifetime educational tour. Here are my stories.

“It’s a bit, how you say…too much mist? So maybe you will come back after for photos if you would like”. Our host for the day apologizes politely as she motions us towards the school and away from the dense morning dew covering one of the most perfectly manicured gardens I’ve seen since Versailles. Ashley and I look at each other and laugh. “Are you kidding? This garden is right out of a dream! However, the morning had just begun, and this is a story about pasta after all. We had but a few moments to take in the sight of this “little garden” before we headed into the main building of ALMA – the International School of Italian Cuisine (ALMA La Scuola Internazionale di Cucina Italiana). 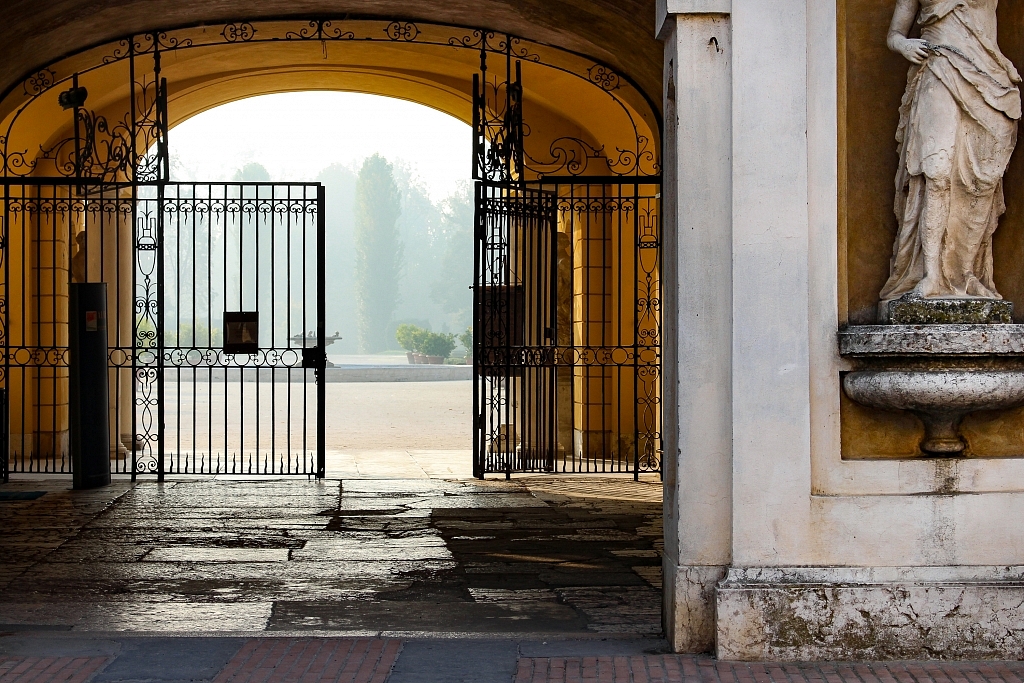 Adding the word “little” to each of our activities at this school was almost comical, as every single thing I experienced at ALMA exceeded my wildest expectations. ALMA is located in the magnificent Ducal Palace of Colorno and covers over 7,000 square meters. As soon as we walked in, they told us we were going to have a “little welcome coffee”. This welcome coffee was actually a highly orchestrated session with a private Illy barista (Illy is one of the primary sponsor for the school, and I hope one day, my life) along with a full table of decadent cakes and chocolates that the students of the school had painstakingly made just for us. I almost felt bad for only eating one giant slice of orange and brown sugar cake and three chocolate truffles.

Next, they told us that we were going to go on a “little tour” of the premises. This tour actually consisted of a private in-depth dive into all the different parts of the school, including their pastry lab exams, a high-level sommelier class, a Korean student program, and an impressive 17th century wine cellar. We ended the tour in one of their dining rooms with a five-person lecture and demonstration on the history and merits of Prosciutto di Parma (PDO), one of the most famous products of the Region (the school is located 10 km from Parma, the heart of the Italian Food Valley and a UNESCO-designated Creative City of Gastronomy).

Finally, it was time for our  “little pasta lesson”. 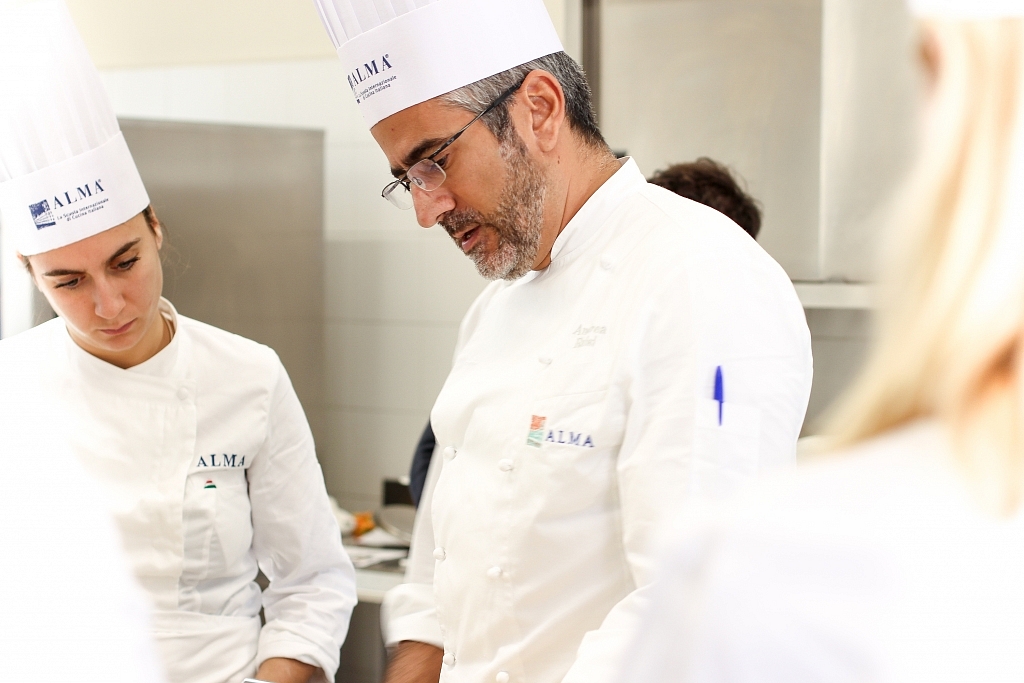 I think you can probably guess by now that the pasta lesson was incredible. Like Aziz Ansari’s character on Master of None, many North Americans have dreams about going to Italy to learn how to make pasta from an Italian nonna. With all due respect to said nonnas, getting a lesson from Chef Andrea Ruisi was the best way I could have ever imagined learning how to make fresh pasta for the first time. 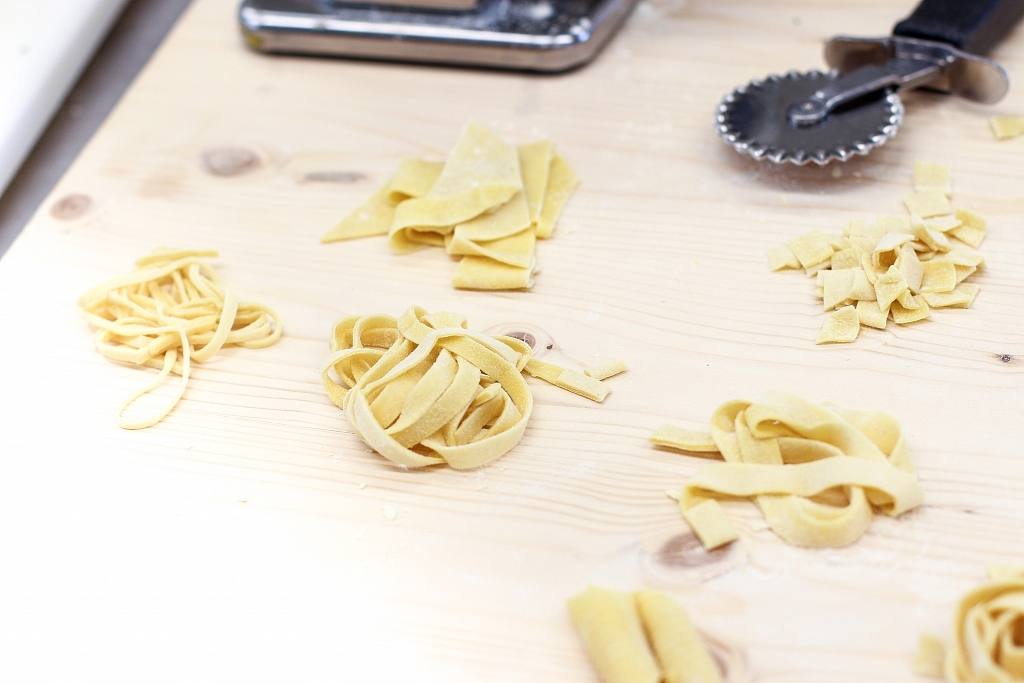 I thought I knew pasta. In fact, prior to this lesson, I prided myself on being able to identify at least 30 different Italian pasta shapes. But could I tell you how many centimetres a strand of spaghetti was supposed to be? Could I explain the different flours required for producing fresh and dried pastas? Could I tell you the difference between tortelli and ravioli? My friends, I certainly could not. 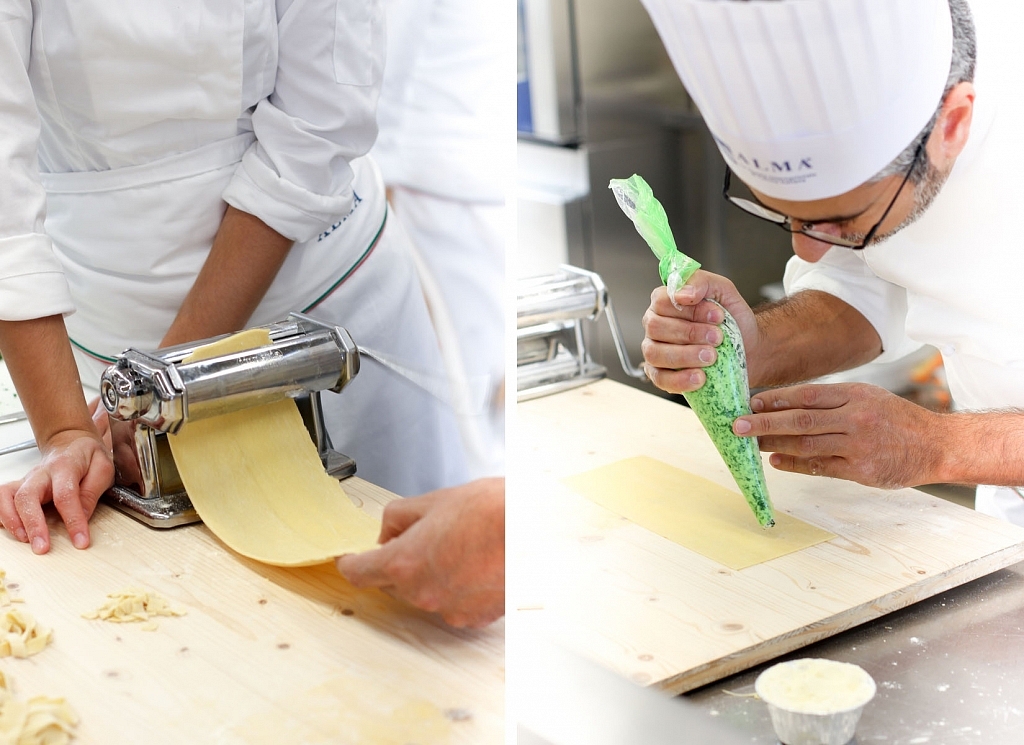 While casually whisking eggs into a flour well and rolling his dough, Chef Ruisi spoke about the history, geography, science, economics, law and culinary development of pasta throughout time. I had never considered the Wheat Vegetative Cycle in relation to Italy’s Northern and Southern Regions, or the difference in food laws for these pastas. Since coming home, I’ve done a lot more studying on my own and am blown away by the intense regulation of this traditional food product.

By the way, the answers to the questions above are: 25-30 centimetres because it is the exact length required to wrap spaghetti around a standard fork three times; 00 or soft high-gluten flour for fresh pasta and hard (durum or semolina) for dried pasta; they look almost the same, but tortelli is folded over and technically only has three sides even though it looks like a square, and (particularly with the fillings we used) is more common to the Emilia-Romagna and Lombardia Regions. 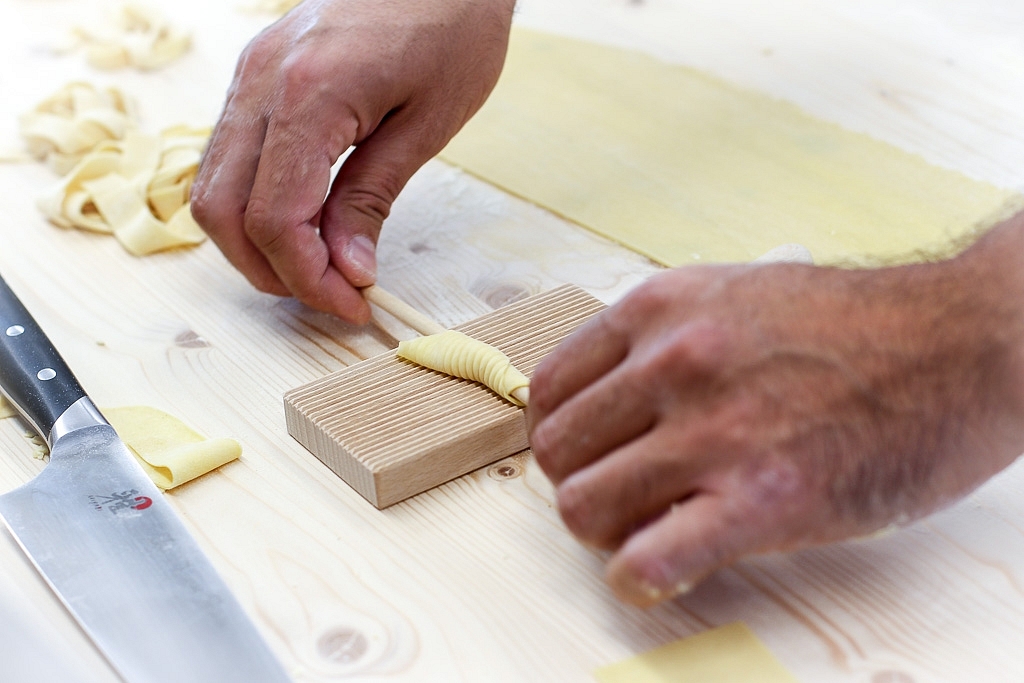 Then, with the assistance of his two student sous-chefs for the day (Francesa and Federica), Chef Ruisi demonstrated how to make one of his favourite pastas, Tortelli di Erbetta: a fresh filled pasta consisting of ricotta, mascarpone and Swiss chard, tossed in butter and Parmigiano Reggiano, and garnished with sage. Once satisfied that we had asked all the questions we needed to ask, he put an hour on the clock and told us to do exactly the same.

I’ve watched enough cooking shows to know that the heat in the kitchen can elicit insane emotions. My new, sweet, Chicago friend Ashley and I were all smiles and high fives as we started the process at our side-by-side stations. However, by the time we were halfway through, the mental anguish and stress had set in big time and the two of us were no longer in our former state of pasta bliss. It was especially hard to watch our friends Jared the pastry chef and Nick, Chef de Cuisine at Osteria Mozza, in their stations in front of us, roll through the process with ease. Nothing seemed to go as planned. The water didn’t boil. The pasta roller got stuck. There wasn’t enough Swiss chard, then there was too much Swiss chard. Neither of us cried, but I swear we were both on the verge. 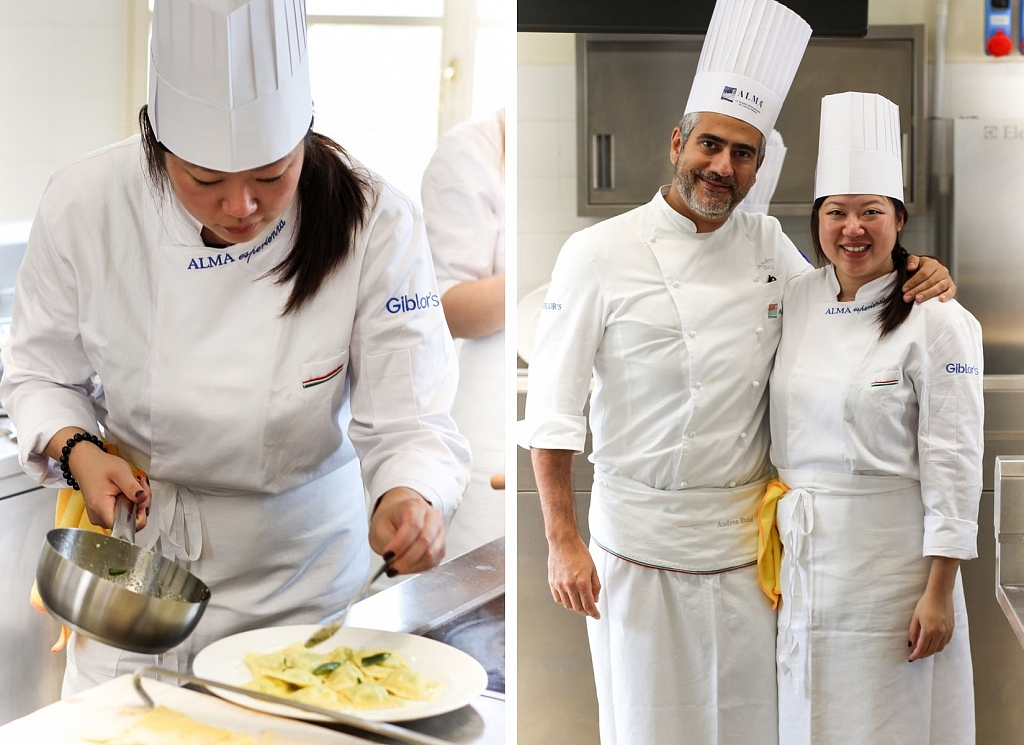 Thankfully, it all came through in the end. 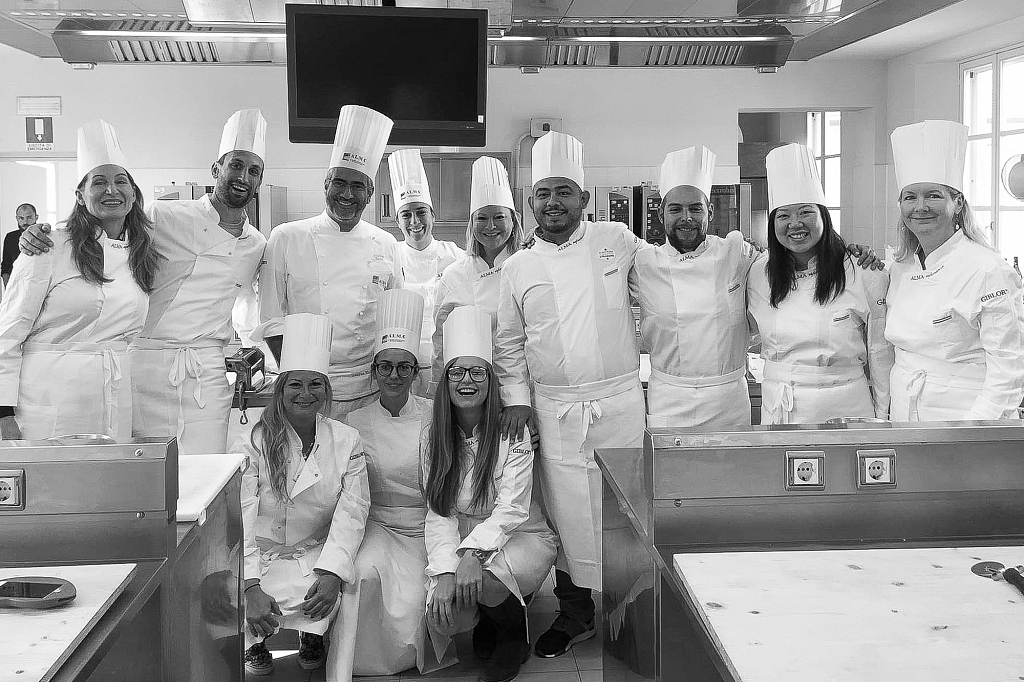 As is often noted on Top Chef, the simpler a dish, the harder it is to hide behind. Who knew two eggs and a pile of flour could cause so much grief? Despite all the insanity, Ashley and I managed to present two respectable dishes. After we finally put the last piece of sage on our dishes and put our kitchen towels down, we hugged each other in relief.  Even if Chef did raise a remark that the two of us may not have salted the pasta water enough, I think we were both still wholly successful. 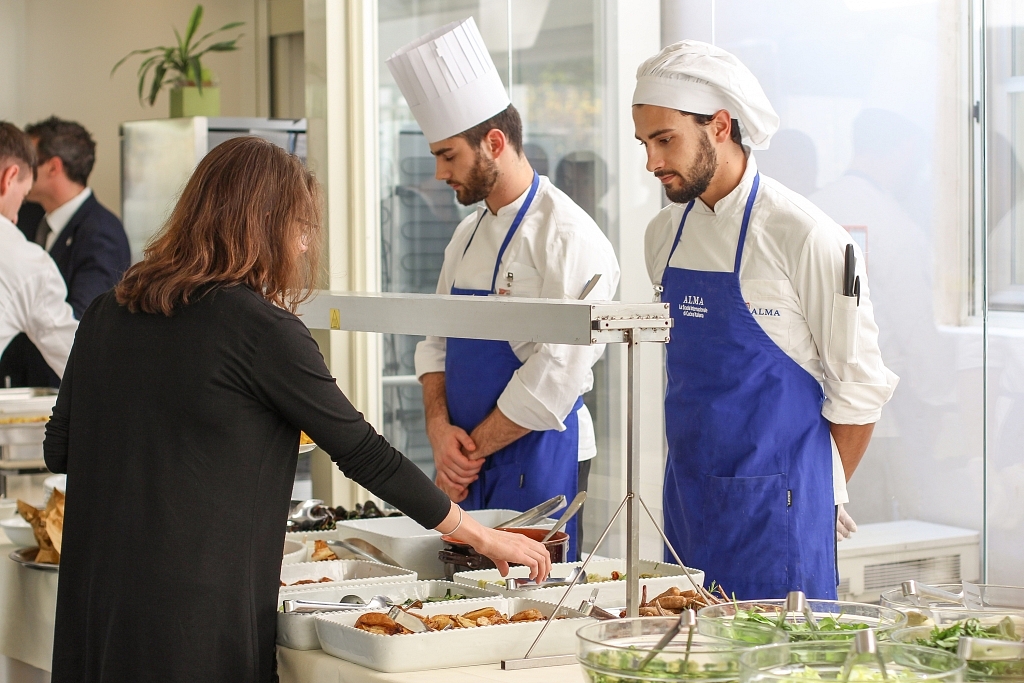 After we finished admiring and eating our work, we were escorted downstairs to the lively student dining rooms. We learned that the students have a regimented three shifts of lunch prep a day, where they have an opportunity to eat each other’s food, show off the cooking techniques they learned during the day, and share the grunt work of kitchen prep and clean up. This acts as an incredibly positive and robust feedback mechanism. 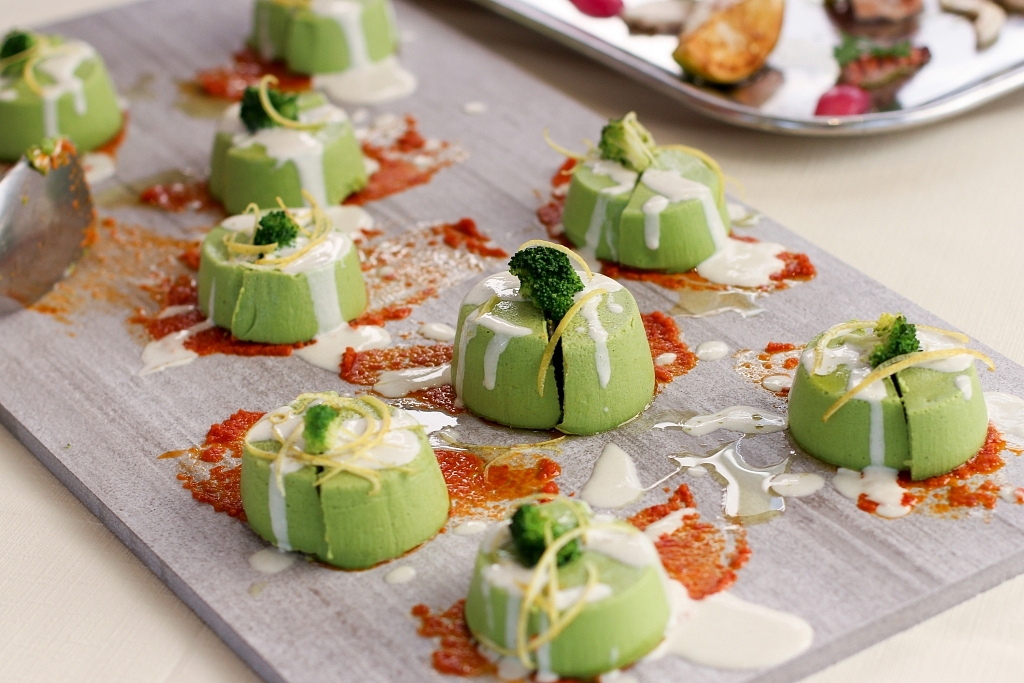 As an example, this broccoli flan pictured above was a beautiful and innovative dish that I had never tried before, and certainly not something I would have traditionally associated with Italian cuisine. However, it was unmistakably Italian as soon as I took the first bite, and of the ALMA quality I had quickly come to recognize. Joined by several school administrators and a few bottles of sparkling red wine, they then announced that Chef Andrea Ruisi would be presenting us with honourary one-day diplomas! I don’t know if law school graduation felt as sweet as this. 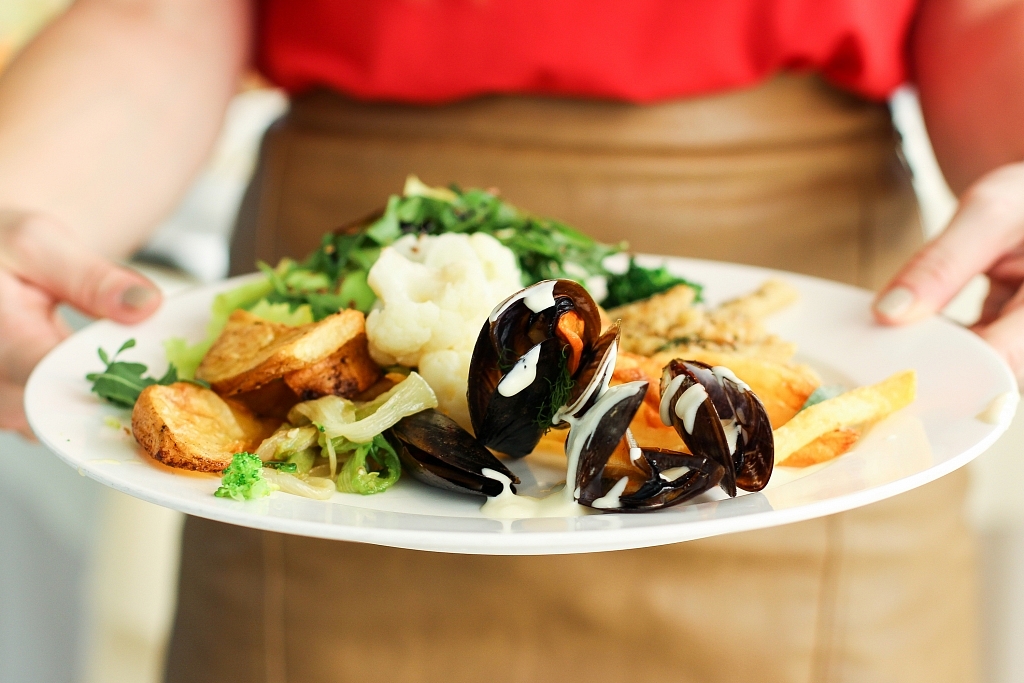 By the time we were done with lunch, the mist had cleared and the garden was perfectly clear. As much as it would have been difficult to capture the beauty of the morning mist in a photo, the lessons I learned that day are ones I can barely capture in a blog post. Learning how to make fresh pasta from scratch is commonly perceived as a daunting but rewarding rite of passage for any chef or food-obsessed amateur. I still can’t believe I did it here. 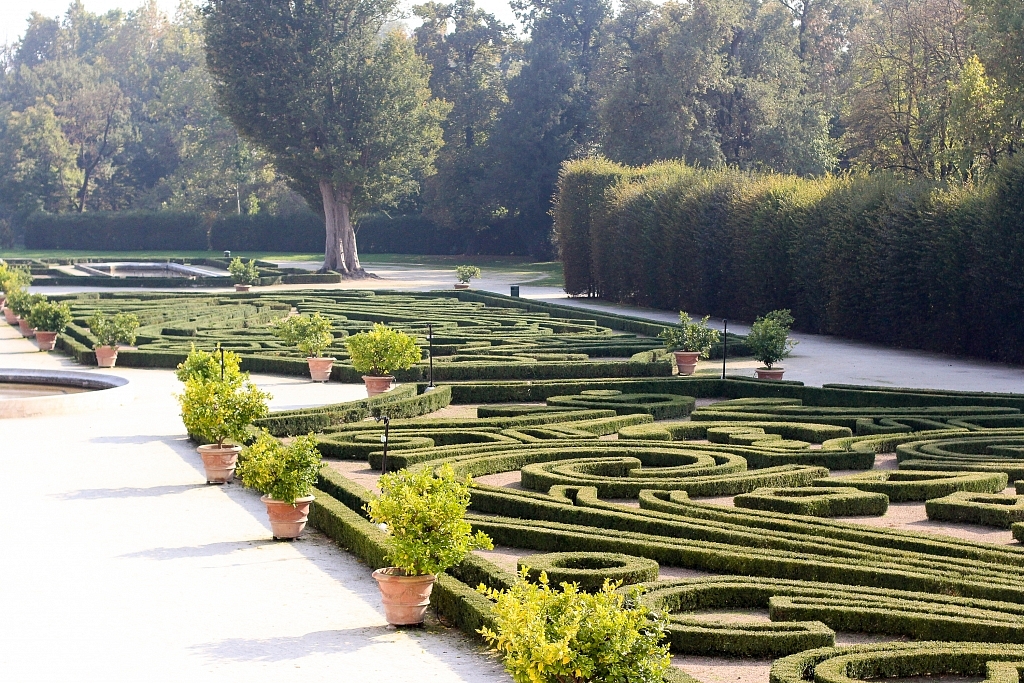 The opportunity to learn and cook at ALMA is incredibly rare (as a student, and even more so as a guest), and I know I am deeply privileged to have had this experience. However, I vow to share the love and knowledge as much as I can. To start, I have replicated Chef Andrea Ruisi’s recipe for Tortelli di Erbetta for you below (accompanied by a photo of the pasta I made!). May the force of ALMA be with you. 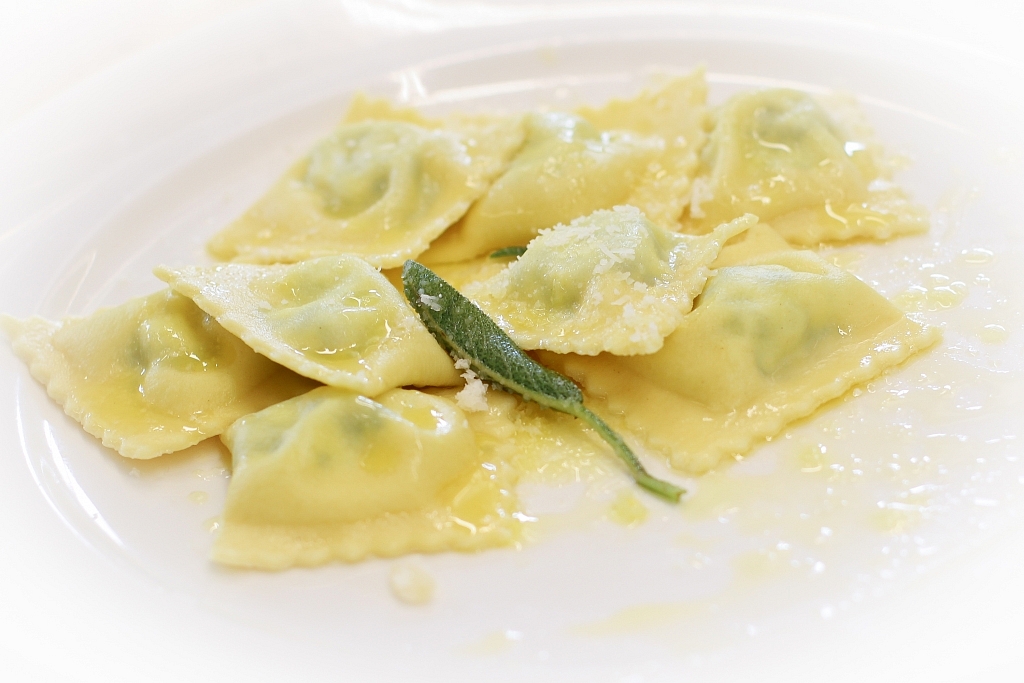