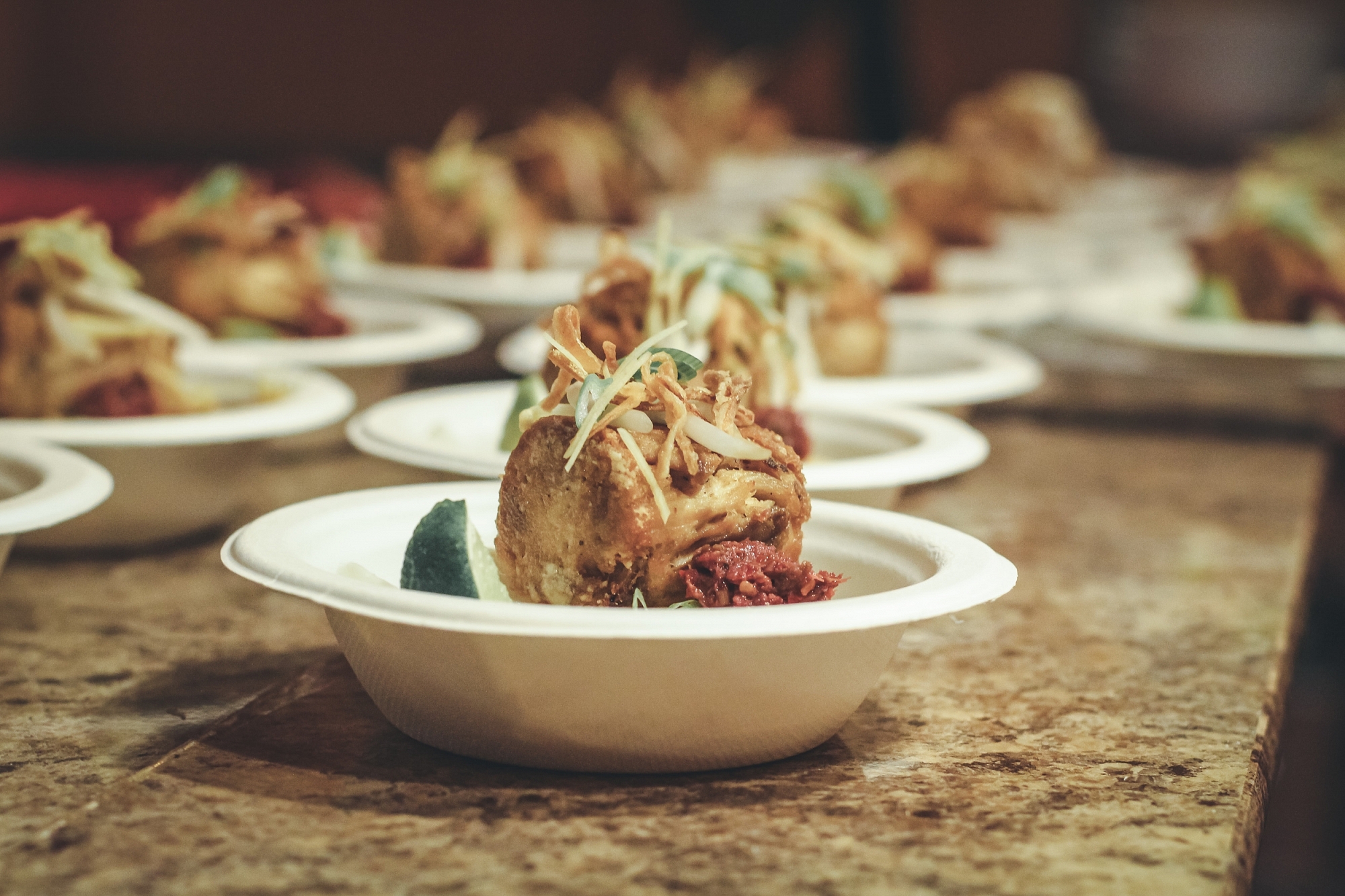 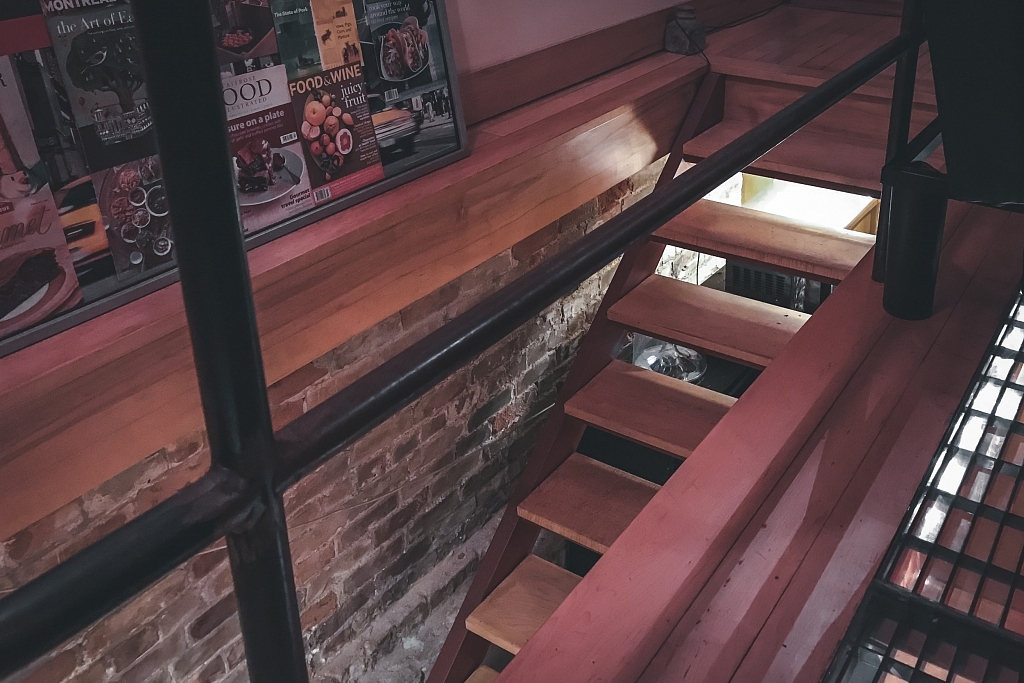 In a city like Toronto where we avoid eye-contact like the plague, the underground supper club comes as a welcome opportunity to those of us extroverts who love any excuse to talk and eat with strangers. A few weeks ago, at the invitation of my friends at Fork Monkey, I took the plunge and punched in the secret location address of Chef Luke Hayes’ L.U.S.T. (Luke’s Underground Supper Table) into my phone and went on my merry way in search of a fun experience.

It was one of the coldest days of the year. I remembered this well because the “secret location” in the Kensington Market led me to a locked door with a narrow foyer and five other very confused people. Given that hypothermia was the alternative to shoving six strangers (sardine can style) into this small space until the doors were opened, we all compromised on our personal space and became friendly with each other very fast. To this day, I’m still not sure whether this locked door situation was an intentional icebreaker move or not. 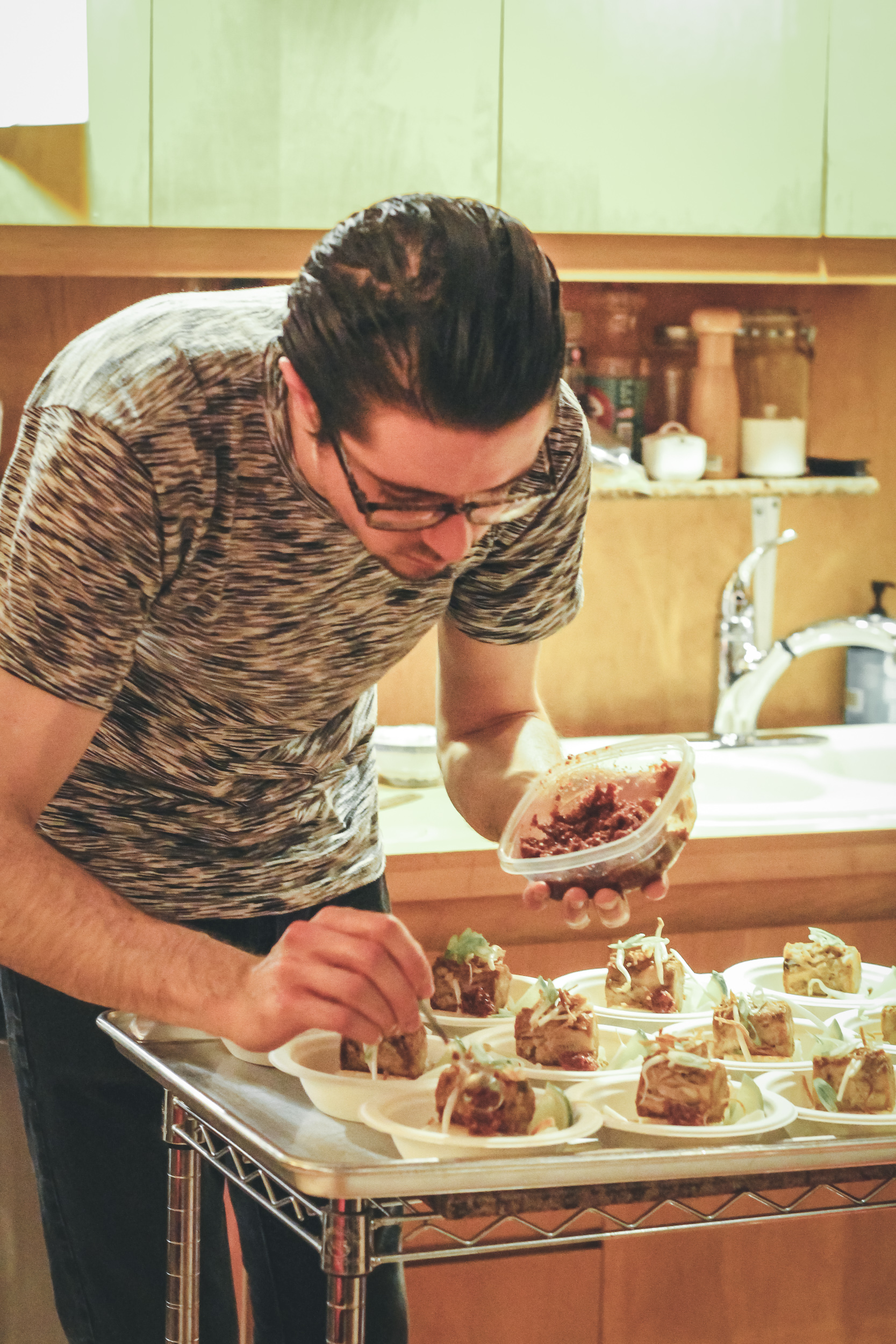 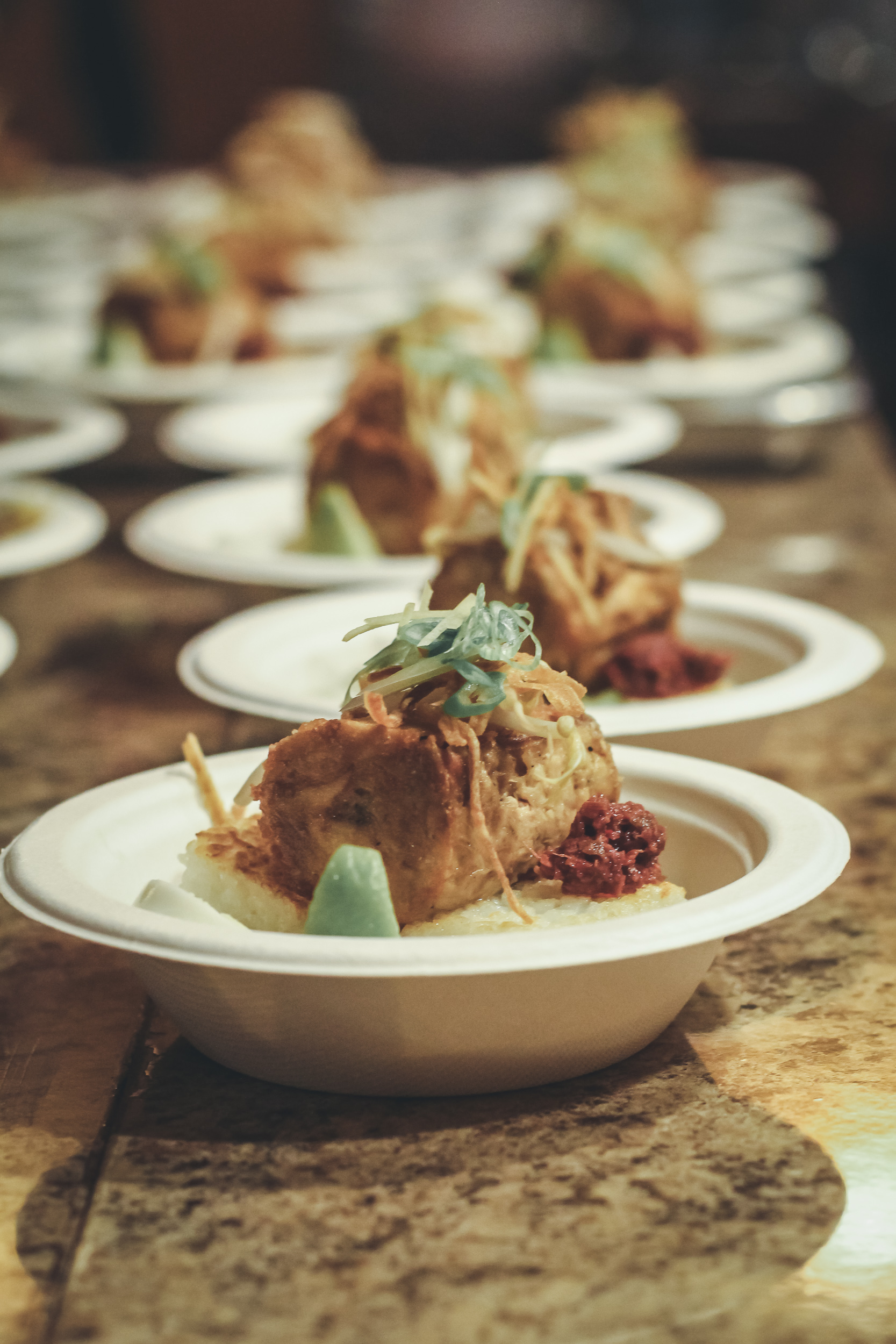 I’ve given it a bit of a thought over the last month, and have concluded that I am unable to properly classify Chef Hayes’ food or his personality. If you’re wondering whether you’ve heard the name before, perhaps you will remember him as the prodigy child chef from Kingston, Ontario prominently and sporadically profiled over the last decade. His parents opened a restaurant many years ago when he was barely a year old. His mother Carrie soon realized that he had an incredible talent for cooking, and eventually named him executive chef of Luke’s Gastronomy at the young age of 15.  After eight years of running Luke’s Gastronomy seven days a week, Luke and his mother felt it was time for something new, and moved to Toronto to start this supper club (and a few other exciting ventures to come). Today, Carrie is still Luke’s sous-chef and number one supporter.

On this particular night, our theme was “McDonald’s around the World”.

We started with a casual homage to McDonald’s in Italy with a crispy panko-crusted basil, lemon zest, and ricotta fritter served on top of a salsa verde. This was followed shortly by a return to North America to experience Chef Hayes’ interpretation of the McRib. “So typically”, Hayes informs us, “[the McRib] is just pork shoulder that they’ve kind of like, forced into a rib shape. But I wanted to keep it kind of classy, so we’ve turned the pork shoulder into a torchon”. This was topped with red onions, homemade ketchup, McDonald’s-style pickles, and a 32-ingredient barbeque sauce. With a few crispy potato bits on the top to mimic French fries, and a brown butter sesame seed bun on the side, the dish was a perfect interpretation of the fast food restaurant’s spirit in gourmet form. 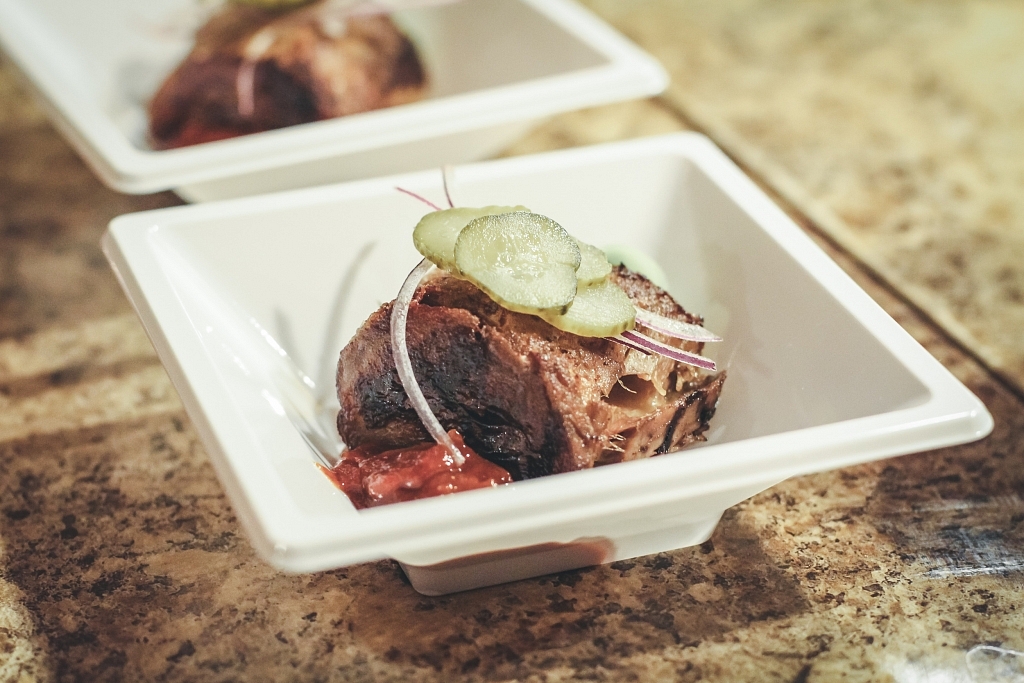 Next, we ventured to Indonesia (one of Hayes’ favourite cuisines), for a crispy, slow-cooked chicken torchon served over a square of white rice and a green curry highlighting the flavours of galangal, roasted tomatoes, fish sauce, turmeric milk, and kaffir lime leaf. This was topped with a lime wedge, a hard boiled egg, fried shallots, scallions, bean sprouts, and a very spicy sambal. Other than the fact that I wished the dish was larger, I think this was the best example of Chef Hayes’ flavour profiles and abilities that we tasted this evening.

The dessert led us to “McDonald’s in Taiwan”, which (acknowledging my own bias) I think even Chef Hayes’ realized was a bit of a stretch. For this course, he had conjured up some milk tea flavoured ice cream alongside dollops of pineapple jelly and pineapple vanilla pudding (a nod to Taiwanese pineapple cakes). But then, he also threw a giant coffeeshop-style chocolate brownie (with some chocolate crumb) on the plate and admitted, “it’s not Taiwanese at all, but it’s super popular in McDonald’s Japan so…”. He hurried through the rest of his commentary, did a half turn, gave the group/himself a half-clap, and then waltzed down the staircase. I’ll chalk up this dessert situation to the assumption (and evidence through his social media) that he just really likes to make brownies. 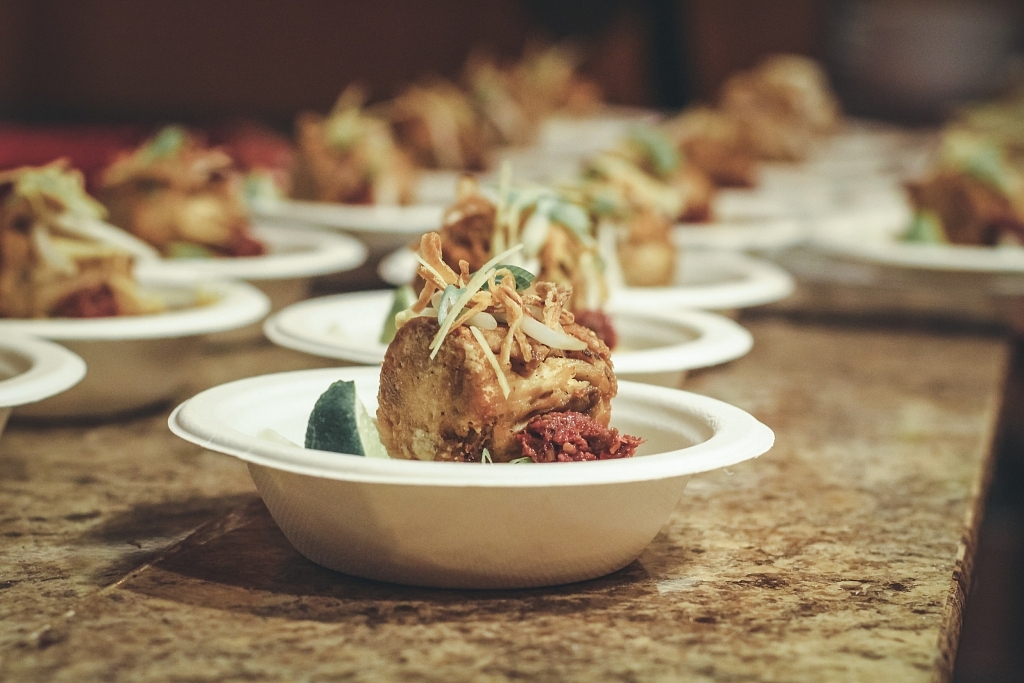 We live in a city where there are amazing supper clubs for every style, demographic and price point. I would describe this particular experience as 1 part gourmet, 1 part kitsch, 1 part celebrity chef experience, and 1 part awkward first day of high school cafeteria lunch.

Luke throws three to four dinners per month with a limited number of tickets available, usually running around $57-$62 per person for his 4-5 course themed menus. To get around the liquor licensing laws, each guest is always asked to bring their own wine or other beverages they would like to consume. Dates and themes for L.U.S.T. Supper Club are announced on his website, or through his newsletter. For more information about awesome dining experiences in a city near you, check out Fork Monkey, the Underground Food Network.