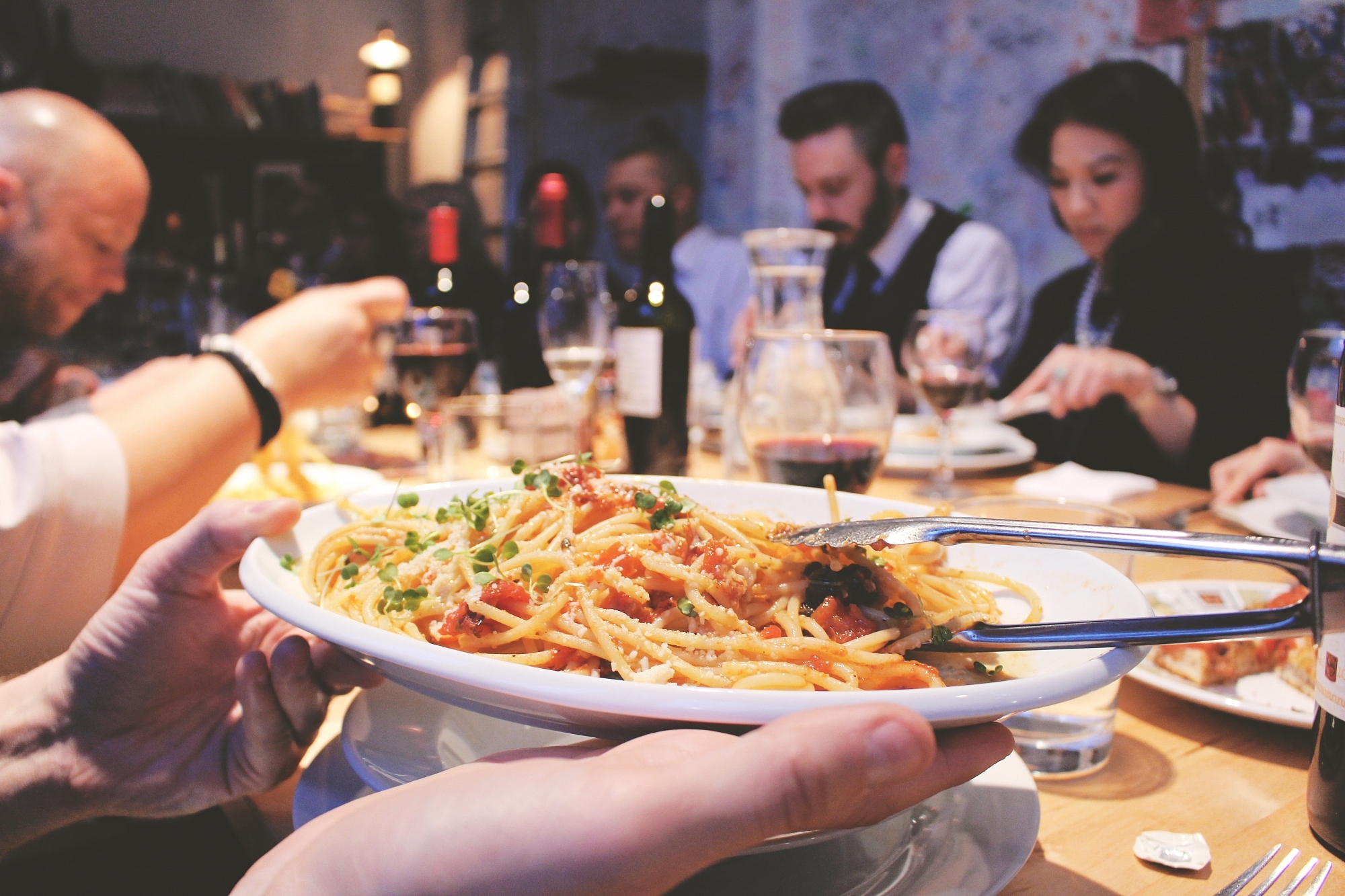 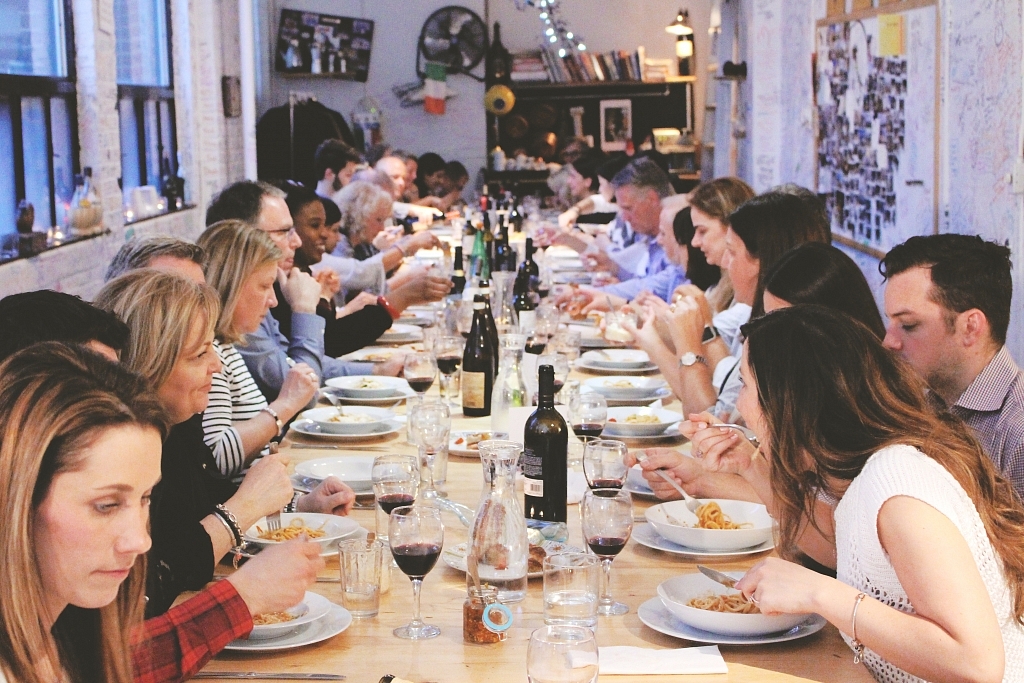 Two kisses on the cheek. A round of high fives. A big bear hug. The couple ahead of us at Massimo Bruno’s kitchen studio/dining room takes their time exchanging every greeting they possibly can with the man of the hour. Though this lengthy display of affection leaves Lorenzo and me stranded awkwardly in a nondescript hallway for several solid minutes, I can’t help but smile and laugh along with them. When it was finally our turn to enter the room, Massimo immediately brings us both in for a handshake hug combo, as if he’s eagerly been waiting to meet us his whole life.

This is the kind of warmth that makes Massimo Bruno’s supper club so damn special.

I was introduced to Massimo by my friends at Fork Monkey, a supper club club (yes, a club for clubs) based out of the United States, who are just starting to lay their foundation in Toronto. They are essentially a service that finds the coolest supper clubs and dining experiences in your city on your behalf, so you can look good and eat well without doing any of the time-consuming research yourself. When they heard about Massimo, they knew that they had to get in on the experience, and I was happy to join in.

Massimo is one of the happiest and calmest looking people you’ll ever meet. He’s tasting one thing to the left and assembling another to the right, while his family and staff are running around him, chopping, swirling and mashing frantically to get everything done before service for forty people at a single table. In the midst of all this, he looks about as stressed as someone casually bringing a pre-made fruit tray to an office party. After he’s ensured that all his guests are well-settled, Massimo brings out a large silver mixing bowl and ladle and starts rhythmically clanging them together. I later learn that this is his signature way of announcing to the group that he’s about the introduce the menu. The lively chatter tapers off as everyone eagerly awaits his big introduction. 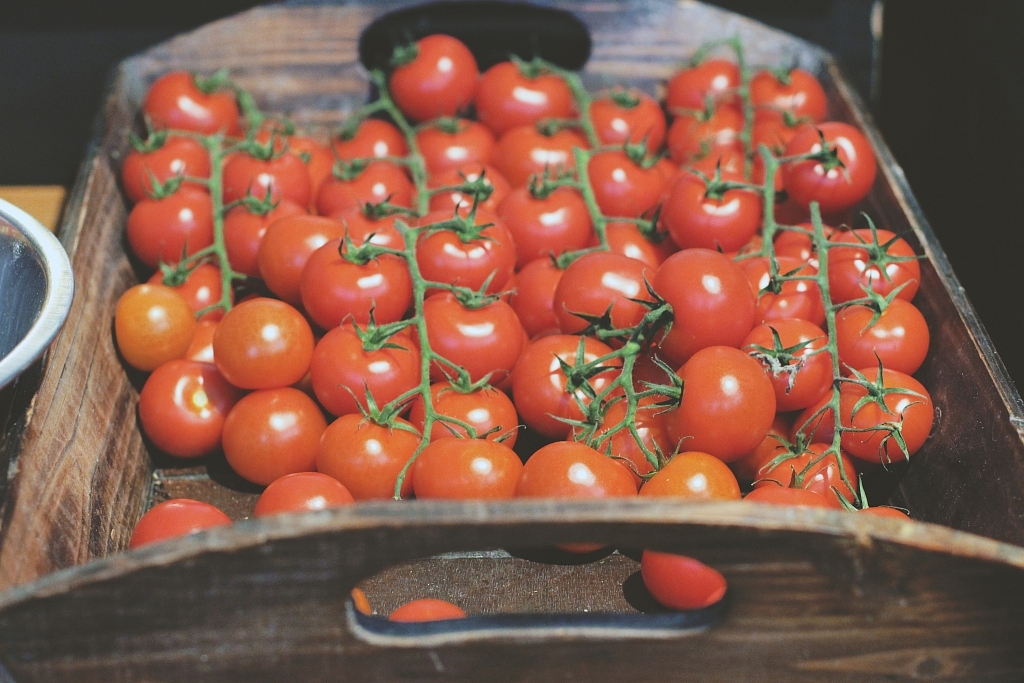 The first dish he introduces is the eggplant parmigiana, or parmigiana di melanzane, made from his mother’s signature recipe:

This dish should really be on our family’s coat of arms, you know? Eggplant parmigiana is a dish that we all love in my family, because it’s a dish that is so versatile. All the time, when we have to do something, I envision eggplant parmigiana in the background. If we need to do a day trip? Eggplant Parmigiana. It’s good in a sandwich, and at room temperature.  Particularly when we have to do a long trip. When my family wanted to do a long trip, it was [usually] from Bari to Naples. Three years ago, my family was like, we are going to go to Naples. My mom is like, there is nothing to eat in Naples. I’m not going to give 15€ for stupid sandwiches at the Autogrill. So, we bring eggplant parmigiana.

Oh yeah. I should also mention that eggplant parmigiana is also good for three days, just in case the car breaks down.

The room was in stitches.

“Does he tell the same stories every time?” I ask the couple beside me, who earlier informed me that this was their seventh dinner at Massimo’s. “Oh no”, Martin says emphatically, “he tells different stories each time, but they’re always hilarious. He always has his bowl and ladle too”. 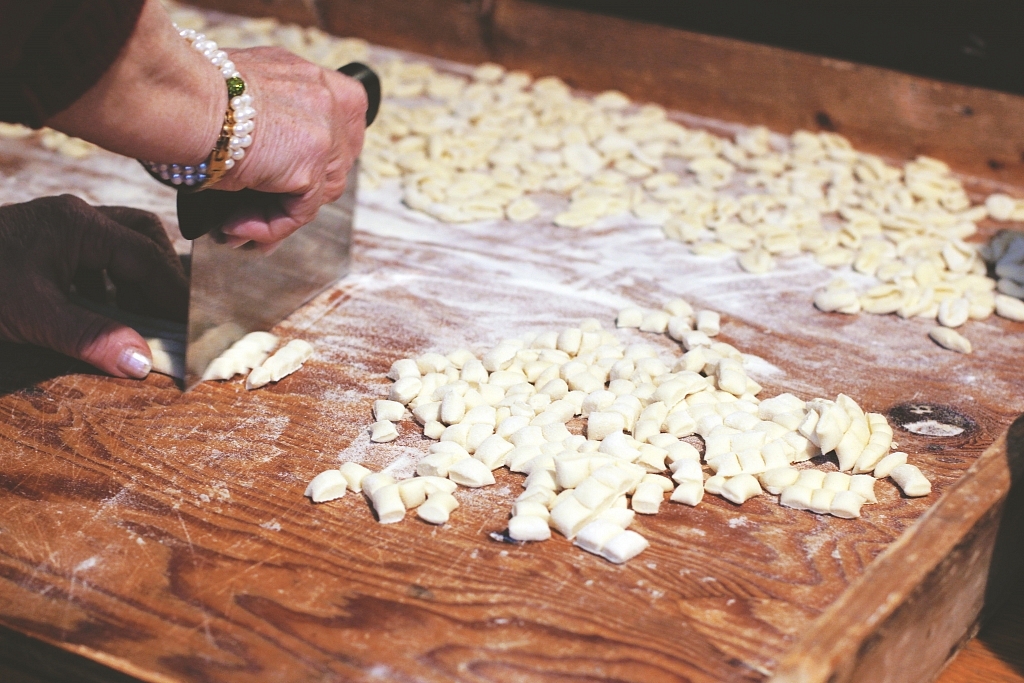 Several dinners a year, Massimo employs the help of his mother, Francesa, in the kitchen. Like many Italian men, he’s a self-proclaimed and very proud mamma’s boy. She comes to visit him in Toronto and helps him with his food here, and he regularly makes trips back to her home in Puglia. In fact, Massimo also organises culinary tours to visit his home and the surrounding region in Italy. From what I hear, it’s an incredible experience unlike any other, and they are sold out months in advance.

In addition to making her famous eggplant parmigiana, Francesa is also in charge of the Cavatelli colle rape, which her version of Puglia’s most famous dish. It’s a simple fresh cavatelli pasta made with semolina, tossed only with olive oil, rapini and garlic. She’s also overseeing the second pasta dish of the night, which is the Spaghetti con pomodori al forno (spaghetti with roasted tomatoes), otherwise known as Massimo’s favourite dish growing up.

Introducing this dish reminds Massimo of another story of his childhood. As shameless teenagers, his friends would go out partying but would get hungry into the wee hours of the morning. He says to us, “I know mom is sleeping, but it’s okay. I tell her, mom, there are like six of us, and we are hungry”. Instead of getting angry, Francesa would simply walk over to the stove in her pyjamas and ask, “you want spaghetti with cheese or no cheese?” 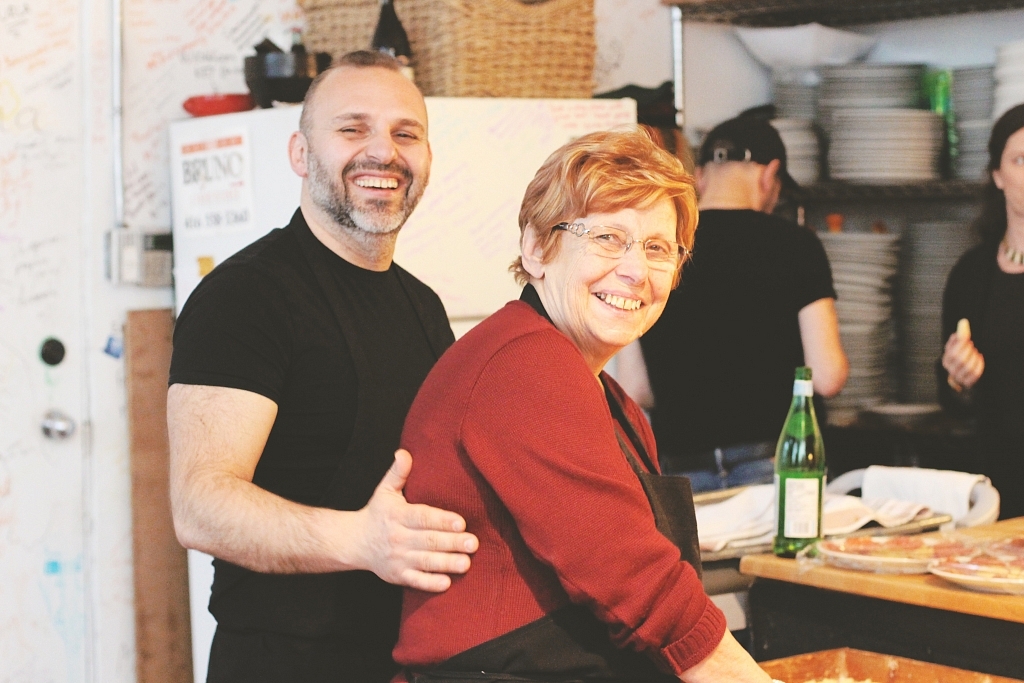 Given the strict liquor licensing requirements in Ontario (and believe you me, the legal aspects of dining are not forgotten when I leave the office), it’s advisable for most supper clubs to run on a “Bring Your Own Wine” model. Before each event, Massimo makes a list of a few recommended bottles that are representative of Puglia. Lorenzo chose an amazing bottle of Primitivo di Manduria to bring to dinner. Not only did this red pair well with literally everything on the table, but it’s also one of the most famous wines from the Region of Puglia. Protip: always ask your Italian bartender friend to choose the wine for dinner.

Finally, we finished off the meal with a dolci of a Pizza di Ricotta (a flourless ricotta lemon cake) and a Sporcamuss (puff pastry stuffed with warm cream). A little cup of espresso (served in a colourful little cup chosen from an eclectic assortment) added a satisfying hit of caffeine right at the end. 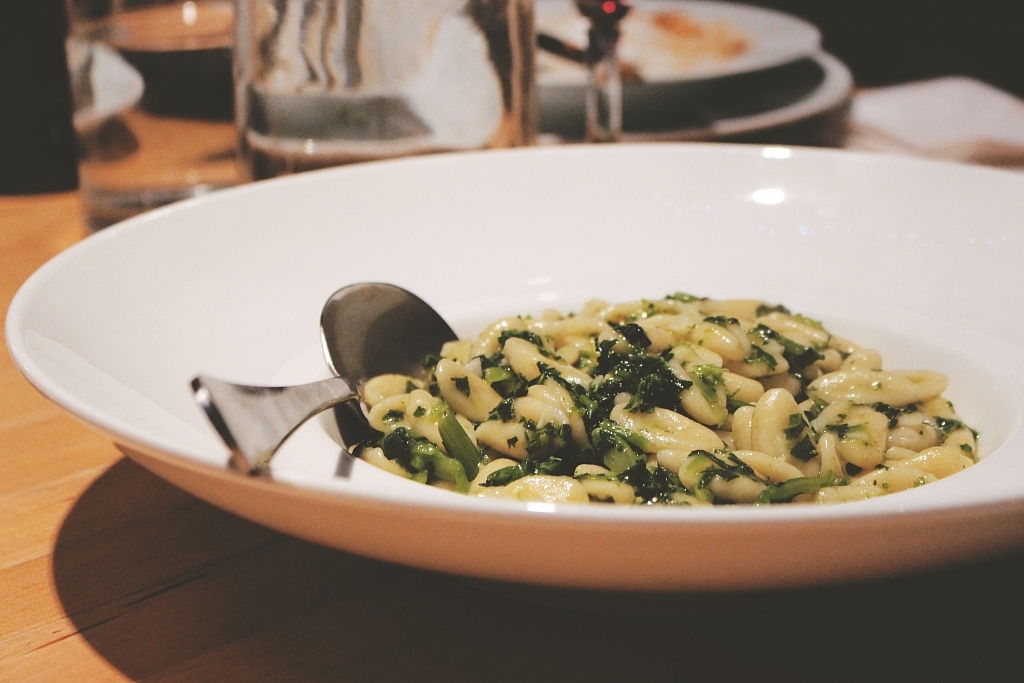 In the weeks following the incredible dining experience at Massimo Bruno’s, I have come to the conclusion that dining with him is the closest thing to Italy you can get in Toronto. None of the food is designed to be fancy or elaborate, but it is all wholesome, and it is all delicious. And for those who crave that truly authentic experience, this one is priceless.