A simple cheesecake with much ado 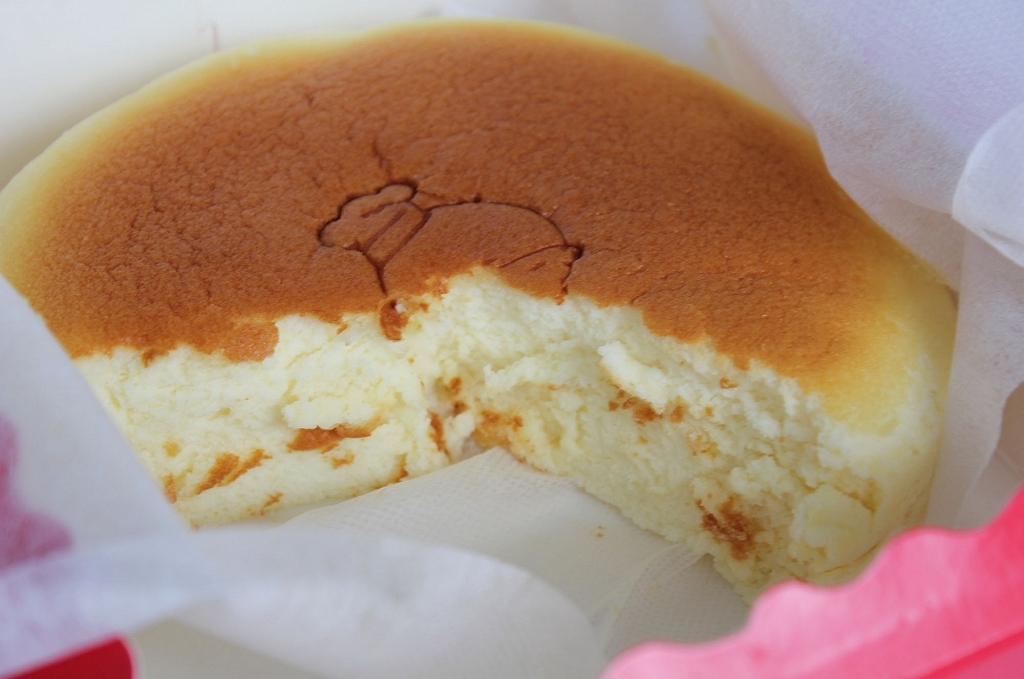 Have you ever had the experience of wanting desperately to eat something right off the page of a book? My strongest memory of this crazy desire was actually from an illustrated children’s book. Though the physical copy is long gone, I can still vividly remember the spread of a classroom full of happy children passing around these little round yellow cake-like cookies during snack time. Man, I wanted those cake cookies so badly. I don’t know whether it was because the drawings were so cute or the fact that I really wanted in on that snack time group, but I have been searching my whole life for something that tastes as happy as those little cake cookies.

There are only a few ingredients in this cheesecake: eggs, milk, cheese, flour, sugar and butter (and probably crack, though this is still unsubstantiated). Simple enough, right? However, these ingredients are also imported straight from some of the best producers in Japan. For example, the Hokkaido milk and Yotsuba butter (also from the Hokkaido region) have a delicately sweet taste that you can’t get anywhere else. If you ever get the chance to try Hokkaido ice cream, do it. And make it a double.

Unlike its North American cousin, this cheesecake is extremely soft. When you bite into it, the sensation most closely resembles what it must feel like to bite into a cloud. There is no crust, no filling or topping—simply a round of fluffy, sensuous indulgence.

They sell madeleines at the Toronto location too, which are a Japanese version of the French classic. With a similar base, these have a much firmer texture and just the slightest hint of lemon. Though they certainly can’t beat the cheesecake, you might as well buy some of these too.

Who is Uncle Testu?

The friendly-looking roundish cartoon character stamped on your cake is actually a real man. Tetsushi Mizokami started his career working in different bakeries in Japan until he began a love affair with cheese and decided to focus on perfecting his signature cheesecake. The “Uncle Tetsu” (or Tetsu-San) brand was officially born in Fukuoka, Japan, in 1990. 25 years later (and at the young age of 67) he is still actively expanding his empire, including launching the Uncle Tetsu Matcha Shop in the space right beside the original Toronto location.

Having been in Taiwan at the height of the Uncle Tetsu craze a few years ago, I witnessed and marveled at the long lines forming outside the shop at Taipei Main Station. My aunt and I once shared one when the line was extra short, and it was indeed delicious. However, given that other Japanese dessert trends come and go in Taiwan as quickly as fashion, I dismissed it as just another fad. But when the craze hit Toronto? I started paying attention.

Why is there such a long line?

Since the day the store opened at Bay and Dundas, there has been an inexplicably long orange pylon-blocked line forming outside its doors. “I heard it’s an hour long” says one passerby. “No way man, my friend waited two-and-a-half for hers!” says the other.

This line is dominated by 20-something year old Asian girls, their doting boyfriends, tourists, and folks who accidentally wandered into the line thinking that someone was offering something for free. Without a doubt, the reputation of the cheesecake is the main driving force for the long line. However, there are a few additional reasons for the hold up.

First of all, this is a small shop, not a factory. There are three ovens in the shop that can each produce 12 cheesecakes at a time, and are paced at 15 minute baking intervals. Because of the delicate nature of the cake production, they really can’t produce any more, any faster.

Second of all, and related to the first point, they only let in 12 people at once. That’s right. 12 people, not 12 parties. And even when a person leaves, a new person cannot enter until all of those 12 people have left. Each of these 12 people is only allowed to purchase one 6-inch cheesecake ($8.88, or $10 with tax), and 4 madeleines ($2.22 each or if you buy 3 you get one free). It’s an intense and highly controlled process. By the way, the only exception I’ve heard to the “one person, one cake” rule is for pregnant women. It’s like a sympathetic loophole!

Finally, Uncle Tetsu has a good PR team. Uncle Tetsu cheesecake is fabulous, but he’s certainly not the only person in the world making soufflé-style Japanese cheesecake. There are tons of others. However, his strong claim to be the original and best has thus garnered the brand a huge cult following.

Is the lineup worth it?

You’re going to hate me for saying this, but the answer to this question will depend highly on what kind of a person you are. I would never wait in a line for new Kanye sneakers, One Direction tickets, or even entry onto an insane roller coaster, though many of you might. No judgment either way. The nostalgic taste of this cheesecake will not resonate with everyone. However, if I’m ever feeling homesick for a place I cannot describe, or heartbroken, or really, really happy, I think standing in a line to buy a piece of truly satisfying dessert is totally worth it. Maybe not for two hours, but for 30 minutes, I’ll gladly do it.