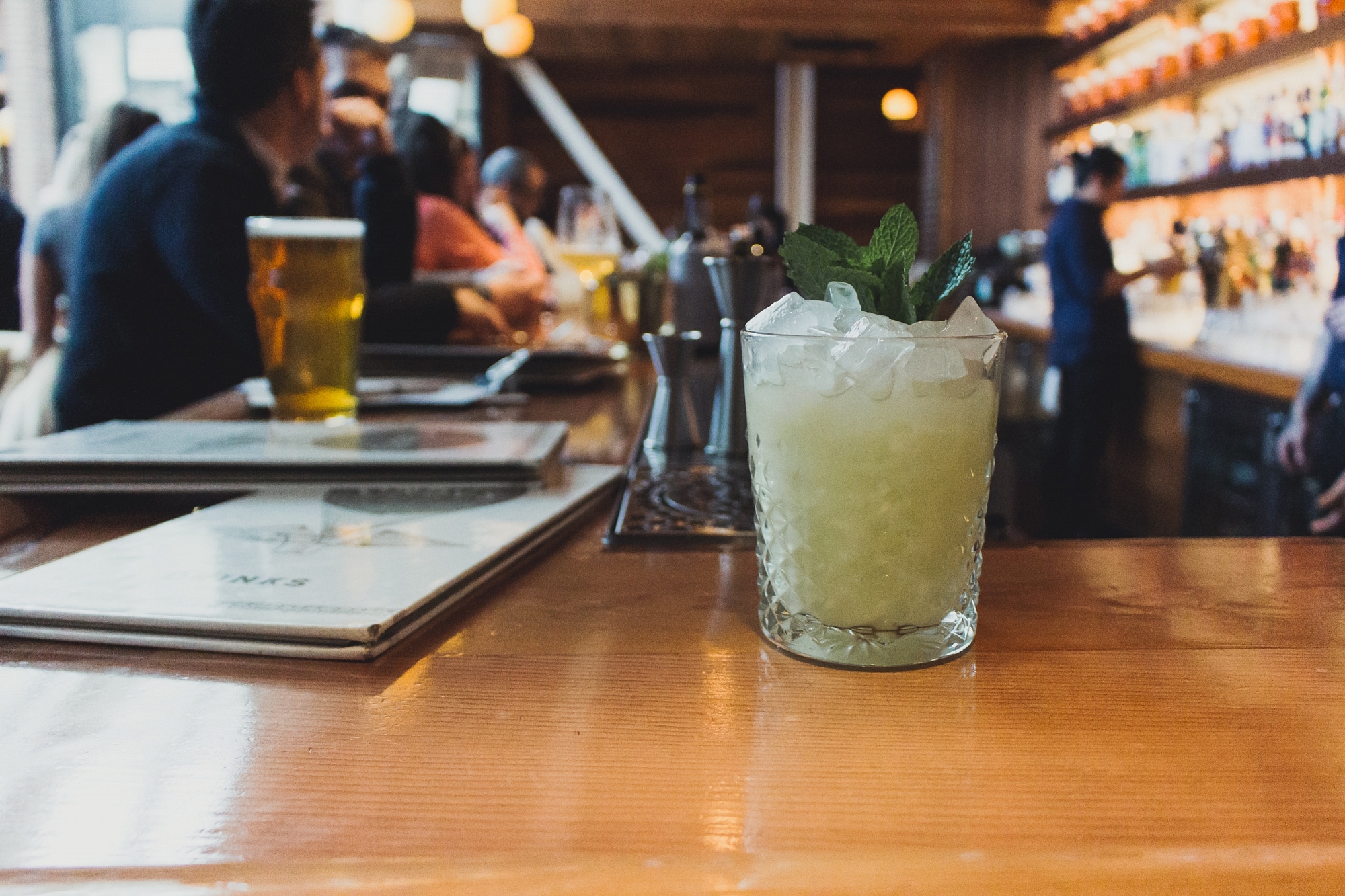 A Food-Filled Long Weekend in Chicago

Chicago is one of my favourite American cities to visit primarily because it is home to some of the best restaurants in the United States. Plus, it takes less than two hours to get there by plane from Toronto! Two weeks ago, I took advantage of a little break I had between my old job and my new job (you can find out more on LinkedIn for now), and convinced DW to join me in the city of Frank Lloyd Wright and Deep Dish Pizza.

The most heartwarming part of this trip to Chicago was being able to spend time with my friend and Chicago local Ashley, who I met on our press trip to Italy in 2017. Ashley is an amazing photographer, Instagrammer and blogger who is as smart as she is photogenic. We also got to hang out with Ashley and her husband’s hilarious pug, Apollo.

After a refreshing walk through Lincoln Park with Ashley and Apollo, DW and I took a ride to Randolph St (this is evidently where all the best restaurants are gathered) to dine at avec. avec is the relaxed sister restaurant to Blackbird next door. Both restaurants are frequently listed among the best in Chicago, and reservations a few weeks in advance are definitely recommended. While both serve refined Midwestern fare, avec is more focused on Mediterranean-inspired shared plates and Blackbird is more elegant and conceptual. The best way to describe the vibe at avec: Clean communal tables with Warby Parker wearing patrons discussing their two-year plan to visit Noma in Copenhagen.

Like many modern American restaurants, avec changes their menu frequently. From the seasonal small plates selection, DW and I ordered a roasted butcher’s steak with green strawberry tzatziki, sunflower seeds, black lime and sumac, and a saffron cavatelli pasta with octopus bolognese and crispy garlic (both pictured below). We also ordered two mainstay dishes on the menu: the chorizo-stuffed medjool dates with bacon, piquillo pepper-tomato sauce and a generous slab of bread, as well as a “deluxe” focacca with taleggio cheese, ricotta, truffle oil and fresh herbs.

There is a very prominent acidic note in all of the dishes that I was not accustomed to. However, I feel that it may be chalked up to the heavier-handed Midwestern take on Mediterranean cuisine that isn’t as prevalent in Canadian versions of similar dishes. Otherwise, everything was fantastic and as advertised.

Ashley graciously planned our itinerary for the entire day. First, we headed back to the Randolph Street area (but specifically, Green Street) in order to put our names down at Au Cheval Diner for brunch, while we had a “light breakfast and coffee” at the beautiful Allis Restaurant located on the ground floor of Soho House Chicago. Soho House is an international members-only club (the one in Toronto is really fun as well) but Allis is open to the public.

Ashley and I were very satisfied with the pain au chocolat and almond croissant we ordered. DW’s Instagram-ready coconut pudding was also pretty elegant. Despite the indulgence (seriously trying not to think about how much butter was used in the frangipane), it might have been the best almond croissant I’ve ever had.

Very soon after we put our names on the list for Au Cheval Diner (read: Ashley ran across the street to get us on said list), we were advised that there was a booth open for us. The restaurant was really, really great. So much so that I am writing a companion piece to this post about Au Cheval Diner and the Best Burger in America (coming soon!).

We then sauntered our way towards the waterfront to take a scenic stroll along the (fairly new) Chicago Riverwalk. Here’s a photo of me in the wild:

Next, we headed to our third stop, Cindy’s Rooftop, for afternoon cocktails and the best view of Millenium Park in the city. I really appreciated the airy and relaxed atmosphere at this bar and restaurant, and our cocktails (although I mostly stuck with their mocktails to be honest) were equally beautiful and refreshing.

Fun fact: Cindy’s Rooftop is part of the Chicago Athletic Association Hotel, a restored 122 year old Venetian Gothic building which was home to an elite private men’s club until 2007.

Come for the cocktails but seriously, stay for this view:

On the ground floor of the Chicago Athletic Association Hotel (same building as Cindy’s), you will also find Fairgrounds Cafe, a very fun and nerdy coffee chain. They have more choices than you may be prepared for, including a variety of cold brew coffees on tap. It was a solid stop to fuel up at before exploring the rest of the “Mag Mile” and fighting with tourists to get our shots in front of The Bean.

12 coffees, 10 cocktails (including brunchtime picklebacks from Au Cheval) and full stomachs didn’t stop us from making our fifth “cocktails and coffee” stop of the day at RL. This restaurant and cocktail bar by Ralph Lauren is conveniently located right beside its largest flagship store in the world. As a side note, DW is the biggest fan of Ralph Lauren clothing I’ve ever met. If it hadn’t been for the look of sheer excitement on his face in entering this restaurant, you could have easily mistaken him for a staff member.

Fun fact: Ralph Lauren has four concept restaurants around the world, each with a different name and different style based on the specific city (Chicago, New York, Paris and London) they’re in.

I will admit that I avoided this restaurant on my previous trips because it looked a little intimidating and made-for-tourists. However, my mind was definitely changed after this visit. While the prices are steep, it is a welcome respite from the chaos of Michigan Ave. and a great chance to experience “Upscale Americana” at its finest. It’s also a great occasion to wear your navy blazer, white shirt and tuxedo slippers combo, if you feel so inclined.

A note about Deep Dish Pizza and other Chicago Faves:

In case you thought that was the end of our eating for the day, think again. We still needed to fulfill DW’ “first visit to Chicago wishes” by going for Deep Dish. We steered away from the downtown classics and ventured to local favourite Pequod’s instead. This packed sports bar is not considered a “traditional” Deep Dish restaurant, but I don’t think any of the patrons care. And I didn’t take any photos here worth sharing because…sports bar pizza.

As far as Deep Dish pizza goes, this place is definitely a winner, especially with their cast-iron pan crispy crusts. However, I think I can go without eating another Deep Dish pizza for at least a decade. It takes such a long time to get a spot in the restaurant, a long time for the pizza to be made, and most importantly, a long time to lose the food belly you get afterwards.

In fact, I would have to say that I now feel the same way about Garrett’s Popcorn and Chicago hot dogs, two things I used to love. Perhaps the novelty has worn off, or perhaps I’m getting old, but I really think you may do yourself a favour by not eating all of the touristy things because you feel like you have to. Chicago has so much more to offer than pizza, popcorn and hot dogs.

Chicago is a great city for brunch, and we had a huge selection of places to choose from for Saturday morning. We just missed the prime time to get into Summer House Santa Monica without a reservation (but not before grabbing some giant cookies), so we headed down the street to Cafe Ba-Ba-Reeba for some brunch tapas instead. This large space is filled with families, bridal showers, friends, couples, lots of locals and a handful of tourists. The menu is a mix of purely Spanish (paella, pictured below with an egg on top), Spanish-American fusion (Devilled eggs with Jamon Serrano) , and some simple American-American dishes (French toast with fruit and whipped goat cheese butter). Although the decor is a little dated, it’s a fun, lighthearted restaurant that’s great if you want to try a ton of dishes at once (or just want another excuse to drink Sangria).

By Saturday afternoon, DW and I were already checked into and greatly enjoying our stay at The Publishing House B&B (← this is a link to the post I wrote about our stay).

After some more touristy things and a bit of shopping, DW and I decided to have an early dinner at Eataly, a vibrant Italian marketplace and conceptual dining space. Eataly also happens to be one of my favourite international food brands in the world. It’s funny: even though we had already been having more than our fair share of carbs throughout the weekend, the fresh ravioli we ate left us both feeling so light. The magic of fresh no-nonsense pasta is not to be underestimated. We also picked up a few freshly-piped cannoli to enjoy back at The Publishing House.

Everything about our trip to Chicago was perfect…until Sunday morning. I could have ended this post on a high note, but I feel like the disaster of Sunday really needs to be shared. We were just finishing up a relaxing and scrumptious breakfast at The Publishing House when it started to become apparent that the light snowflakes landing on the windowsill were in fact, turning into a full-fledged April snowstorm. We got to the airport as early as we could, but the whole terminal was in a state of chaos. Even in the lounge area, it took us more than a half hour to get through customer service (the lines outside for United Airline’s customer service spanned at least 200 people).

Hour after hour, our flights kept getting delayed, then cancelled. Wait lists changed. People started asking friendly strangers if they wanted to carpool to New York or Connecticut together. For a winter city, it was actually incredible that the airline could not handle a few inches of snow.

DW and I both managed finally to make it out on the last flight of the day.

Despite the snowstorm, each trip to Chicago just keeps getting better and better, and I’m looking forward to coming back very soon. We might consider a different airline, to say the least!

Please note: photos of me in this post are taken by Ashley Hutchinson.