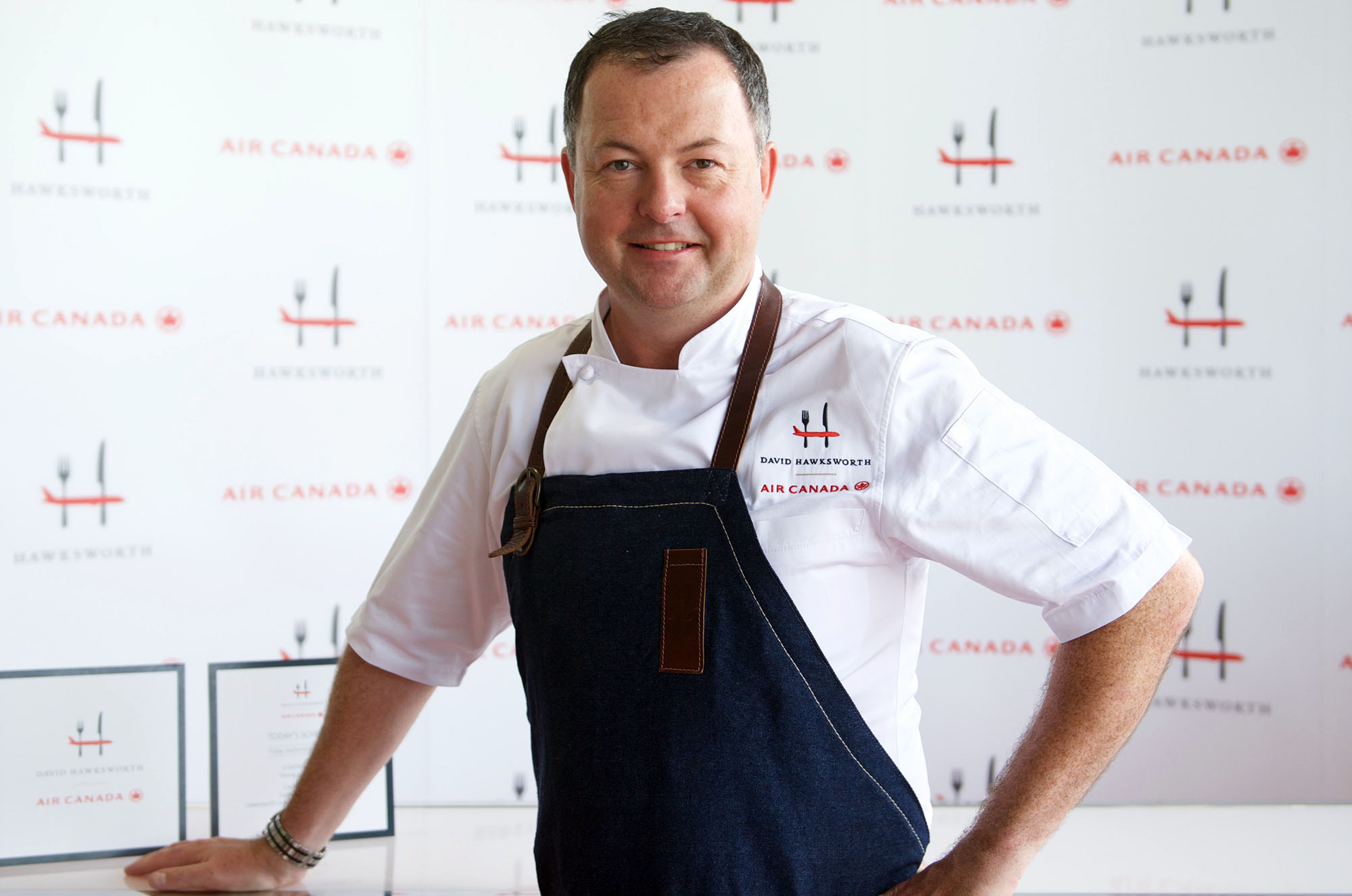 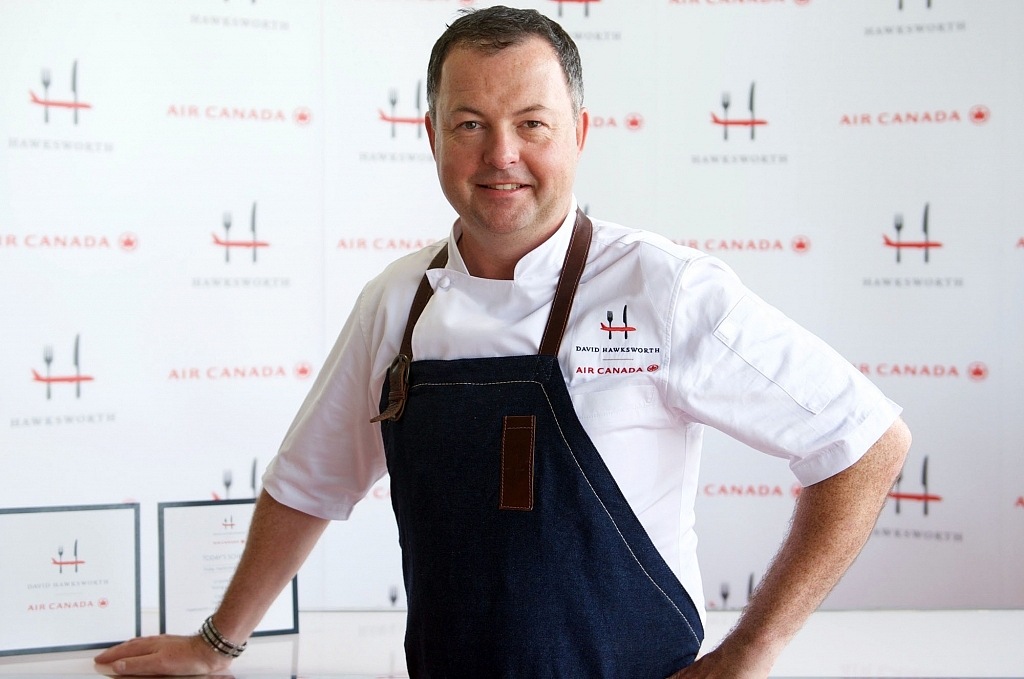 When I sat down to interview Chef David Hawksworth, I couldn’t help but let out a little laugh. I wasn’t particularly nervous, and there wasn’t anything funny happening inside the Toronto Food & Wine Festival media lounge that day. I simply laughed at the thought of this kind-hearted man mustering up the enthusiasm to talk about the new Air Canada business class menu as if he hadn’t already been talking about the same nine dishes day and night since becoming the new face of upscale in-flight dining.

This is a man who isn’t looking for extra accolades or acknowledgment of his culinary skill. Though he may not be one of the chefs you see on the Food Network, he didn’t flinch or blush when I described him as a new breed of rock star chef. “You kind of have to decide if you’re going to do one [be on television] or the other [stay in the kitchen]”, he states matter-of-factly, “and then just do it well”. And do it well he does. In a sea of local and seasonal establishments, Vancouver’s Hawksworth is one of the most well-respected contemporary Canadian restaurants out there.

Chef Hawksworth considers Vancouver home, and acknowledges the city’s large Asian population as having a great influence on his cooking. Geographically, he cites Los Angeles as a source of inspiration, while he admits to rarely visiting Toronto. Luckily for me, I had the chance to see Chef twice in Hogtown this month. 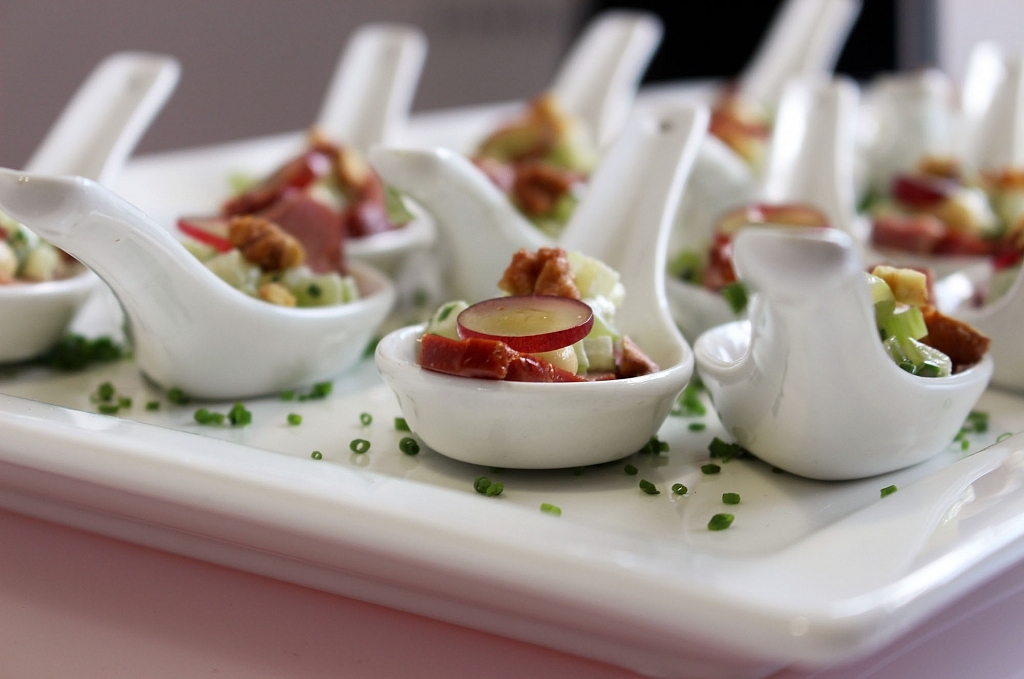 Three weeks ago, I was invited by Air Canada to attend a special unveiling of sorts at the Royal Conservatory of Music. Though the musical accompaniment was live jazz piano that night, I could have sworn I heard a little Eye of the Tiger when Chef Hawksworth’s name was announced. His triumphant walk from staircase to podium was met with cheers usually reserved for the most charismatic of wrestling champions. If anyone there had not heard his name before, they certainly knew it now. That night, we were treated to a menu tasting of exciting-yet-unfussy dishes such as a Yellowfin tuna tataki in a scallion ginger vinaigrette, a poached chili prawn with tomato purée, celeriac horseradish and grilled zucchini, and a tamari roasted sablefish with bok choy, brown rice, and chili-miso vinaigrette (my favourite, as well as Chef Hawksworth’s). Dessert took the form of a dark chocolate fondant and blackberry compote. Airplane food was looking good.

Back at my interview, I asked Chef Hawksworth about some of the challenges with designing food to be served at 35,000 feet in the air:

“You just have to be smart about what products you use and logistically, what’s Canadian and what’s available. [At the restaurant] we are very used to changing menus for lunch an hour before we serve. We can change it up with what’s available and off we go. But it becomes a real tricky thing when it comes to figuring out what is going to be available 100% of the time. And available from Halifax to Vancouver, Calgary to Edmonton, Toronto, and Montreal.”

As for any specific foods that just can’t (or shouldn’t) be on an airline’s menu:

“It just has to be food that the masses can consume. For example, you don’t want to put squab up. We want to try to keep it quite light as well. You know that [the person eating the meal] is confined to a chair and just sitting there, so we want to keep it as fresh and light as possible.”

Pretending that I hadn’t already enjoyed numerous spoonfuls of the smoked Ontario duck breast and Waldorf Salad, I happily accepted an invitation to join Chef Hawksworth and his Chef de Cuisine Kristian Eligh in a private cooking class to make the same. The salad was simple enough (I mandolin-ed those granny smith apples like my life depended on it) but watching the two men talk about the design process was fascinating. Note to self: incorporating agar agar into mustard apple purée makes for a sauce that won’t slide and drip while being transferred. More than how he handles the food itself, I developed immense respect for the way Chef Hawksworth quietly and authoritatively instills confidence in his team.

Starting October 1, 2015, International Business Class customers with flights departing Canada and Maple Leaf Lounge customers will finally be able to enjoy Chef Hawksworth’s new menu. And if you happen to be traveling to Japan this upcoming January, there’s a pretty good chance you may even be able to catch Chef Hawksworth himself, taking what will be a well-deserved ski vacation after an exciting culinary campaign.